More Mighty than Mighty No. 9

The Mighty No. 9 “franchise,” which already had a live action series, toys, and a heap of other cross-media projects planned, is on life support. The tepid response from both fans and critics alike have given birth to more memes than praise, from the “pizza prom night” commercial to the “it’s better than nothing” quote. Heck, even a spinoff game that was given out for free with Azure Striker Gunvolt upstaged it. 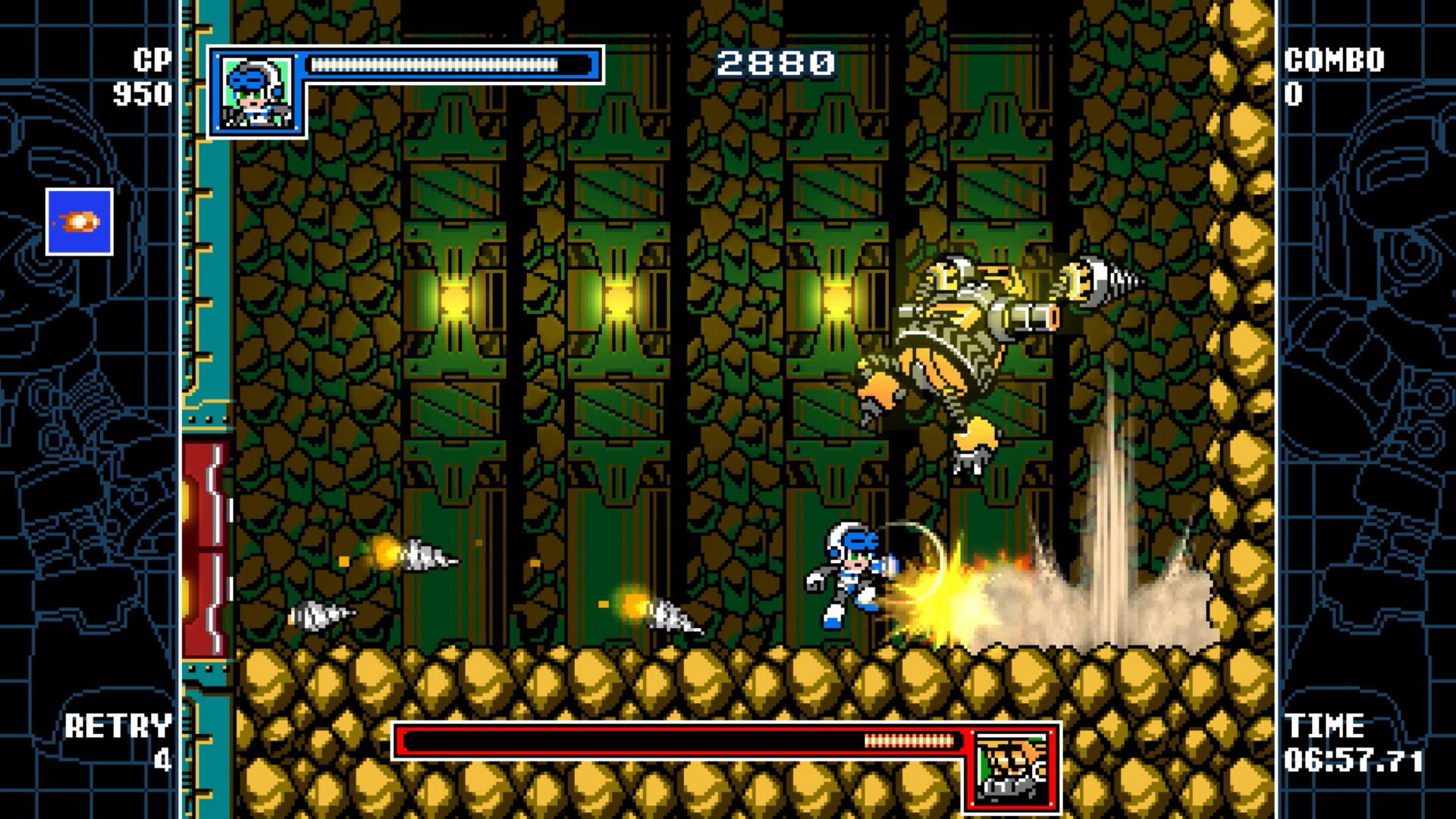 Whereas the original Mighty Gunvolt was something you could breeze through in 30 minutes, Burst is a little more fully realized. Well, you can still rush through it if you wanted, but that’s beside the point. The retro angle has been given a new coat of paint, multiple universes are incorporated beyond just cameo appearances, and each character’s abilities have been fleshed out, going beyond the source material.

The setup involves Beck from Mighty No. 9 and Gunvolt from Azure Striker Gunvolt battling through a set of bosses from the former’s namesake. You’re still going through the same process as both, just with slightly different cutscenes and setups (Beck is in a VR simulation following the events of his first game, Gunvolt is entered into a robot fighting tournament). As I progressed I noticed some really cool takes on the stages from Mighty No. 9, but without the janky animations and technical hiccups. One even has a slight horror element to it that goes beyond Skull Man’s aesthetic or anything else from the classics they’re drawing inspiration from.

A few bosses (Mighties) have their own little slice of uniqueness as well. My favorite of the bunch, the sharpshooter Countershade, establishes fake health pickups that explode after you attempt to grab them, then occasionally creates a real one that he collects himself. But of course Inti Creates falls into a familiar swing at times, as that annoying relic of the past “fight every boss again” gauntlet is back (I loved Mega Man 3‘s take on this with Break Man, though even that game had a gauntlet on top of that). Yet, it manages to course correct and cap off with a very cool final encounter. It’s often a game of give and take when developers try to ape the retro formula like this.

Give and take is a perfect way to describe Mighty Gunvolt Burst, because for all its great ideas, several aren’t taken as far as they could go. The burst system adds a tiny optional risk reward element that you’re either going to go all out on or ignore completely. By killing enemies up close sequentially, you can initiate a combo chain and wrack up extra points. It’s a small bonus but something speedrunners will enjoy — an element that Inti Creates is wise to given that there’s a timer for each stage baked in. Don’t worry it’s not that hardcore, as you can continue indefinitely after each death, including at the boss checkpoint, you just get a score penalty. Where I feel the team could have gone a little farther is with more prominently displayed boss bursts, multi-level chains, and a more obvious score reward system.

That collectathon angle goes a long way as they mostly funnel back to the aforementioned weapon creation mechanic. A new difficulty unlocks after your first clear, but I found myself going back into stages just to get all three completion rewards. It’s a sneaky way to trump up that retro stage select angle that doesn’t feel required or obtrusive. It’ll take you a few hours to blaze through every stage, and a little more to try to snag everything.

Mighty Gunvolt Burst‘s most original element lies tucked away in its menus, and here’s where Inti Creates knocks it out of the park. Using upgrades and experience points you’ve acquired in-game, you can create your own weapons/shot types. You’re not just altering the base elemental properties a la Mega Man, but customizing minute details like the degree of the angle of a deflect shot. With the use of a point system (with a max cap that increases as you play) you can do creative things like sacrifice shot speed or increase the amount of damage you take to squeeze in a few other alterations — like linking any other custom weapon into another as a charged shot.

It goes beyond offensive capabilities too, as one can also equip the “Dowsing” secret seek and find mechanic, which utilizes the HD rumble of the Switch — a feature that I assume is going to rip my Switch in half one day. It’s almost its own challenge to see how far you can go when configuring everything, and I walked away really impressed by the depth of the system despite its poor UI. My only hangup is that after playing with all of your cool toys, there’s a lack of actual buttons (they give you one for jump, one for shots, and one for an ability that’s shared) — the team could easily could have created shortcuts with the triggers.

I can see myself picking up Mighty Gunvolt Burst every now and then, especially since it’s so easy to do on the Switch. If Inti Creates goes the way of DLC or a full sequel where the universes are flipped, I’m already in. They clearly still have it while Capcom and Comcept struggle to get a firm hold on the genre.