I went into Metroid: Samus Returns with what can only be described as pure caution. With such a storied pedigree as a whole and given my personal history with the series, I wasn’t sure that Nintendo and MercurySteam could pull it off.

Alas, the new Metroid is good. It doesn’t redefine the series or take as many risks as it should, but it gives people what they’ve been wanting for what feels like eons. 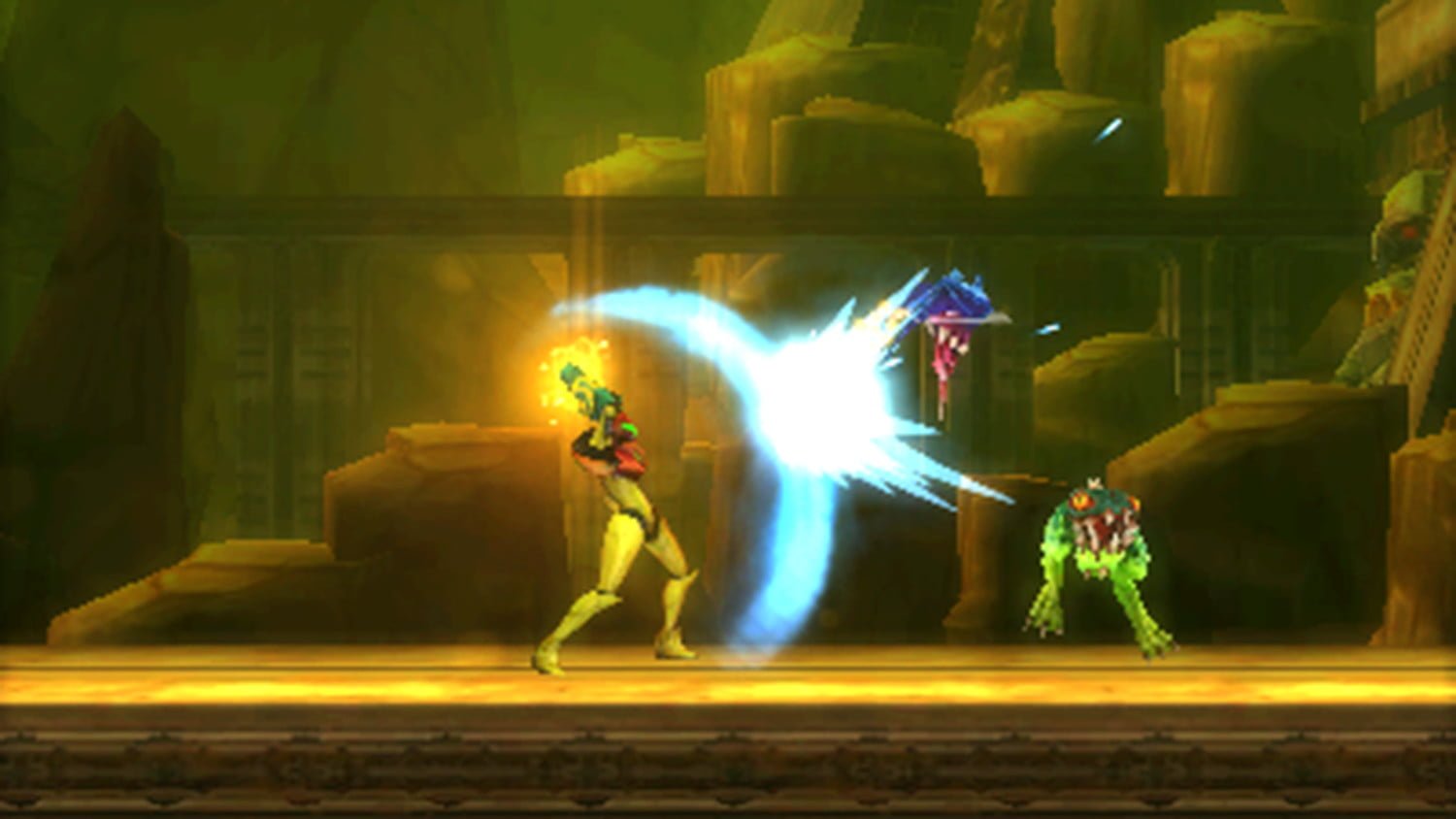 Its nostalgic as hell intro that recaps the original Metroid with that classic overture theme helps set the mood as Samus heads to planet SR388 to eliminate the Metroid menace. Just like the original Metroid II for which this “Returns” moniker takes after, this is an extermination mission, capped with stylish art (which sadly doesn’t extend to the in-game engine), and hauntingly beautiful melodies.

Some of this iconography is re-used, and that’s fine, especially the core formula of hunting down Metroids one by one. Yes, that means repeat bosses as there are only a few Metroid evolutions, but the arenas mix things up to the point where I was never frustrated fighting the same type twice. There’s only one big encounter near the end I didn’t like actually, and it wasn’t even a Metroid.

To beat off the Metroid menace you’ll be using the newly acquired Aeion powers, which bring a form of magic (complete with an MP meter) in the fray. Scan Pulse (which shows off hidden areas) is the first, followed by a shield, more powerful bullets, and a time-slower. All of these but the scanner can be useful in combat, and all four funnel back into exploration. Oh, you can still morph into a ball, stick to walls, shoot missiles, jump really high (with an upgrade), take teleporters around, replenish your ammo and health with the appropriate station — all of that Metroid stuff.

Except this time it’s coupled with a handy free aim feature (using the L button), and a melee system. You can hold your sigh in right now (I know you’re doing it!), because MercurySteam did not turn this into a hack and slash, far from it. Instead the melee trick is actually a riposte counter, only used at certain points when foes (from regular trash to bosses) prepare to charge, christened by a gleam telegraph animation. This melee doesn’t annoyingly pause the game, and the tells are challenging enough in terms of timing that it’s always satisfying to get a counter off, even against the basest of baddies. It’s a great compromise that keeps things honest without devolving into a melee-fest, as you don’t even have to use it if you don’t want to (I’d say I finished most, if not nearly all of the major fights without it).

You might want to though, because while getting around is easier with a perpetual map and a scanner power, enemies hit hard as hell. Even regular denizens, when entering a new area, can lop off half an E-Tank or more, and save points do not bring you back to full health. Occasionally you may even be in the position where you need to farm a bit of energy or head to a health station, and re-save, which might be a little too old school for some. Personally I like that health is a resource, and it’s a design choice befitting of a Metroid game.

With that in mind it’s easier to complete than Metroid II, which is both good in terms of besting some of its more archaic elements, and disappointing. The original gave off survival horror vibes because of how easy it was to get lost and how fierce everything is. Now, you only really have to worry about the latter, and only if you’re not prepared — something that was never really an option in the first as you could never truly anticipate what’s around the corner. So that stings occasionally, and the engine doesn’t look as good as it could. I’m not expecting Fusion-level spritework brilliance after a massive hiatus, but there were a lot of concessions made with Returns, I’ll tell you that much.

The whole amiibo affair is going to be contentious to some, but I was able to ignore without feeling the need to get my pitchfork out and burn my cart. It’s kind of confusing, as hard mode is a pure unlock after completion, but “Fusion Mode” (read: Very Hard) is tied to an amiibo (the actual Metroid, to be precise). Then there’s a reserve E-Tank, a sound test mode, and a reserve Missile Tank tied to the new crouched Samus, Zero Suit, and standard Smash Samus amiibo respectively. I did not have access to the Metroid and crouched Samus figures, but I can say for sure that the other two don’t add anything of worth other than pointless minor cheat codes. That’s way more than I wanted to talk about when it comes to amiibo in a review in 2017, but it’s a thing.

Maybe the next 2D Metroid will take more chances, but Returns is far better than I expected it to be. The faux magic system, while shallow, adds some panache to the action, as do the combat animations that work within the confines of the engine.

[This review is based on a retail build of the game provided by the publisher. No amiibo were provided.]