It sucks for us that neither the DSi nor the DSi XL has a GBA slot, but that omission could make for a profit deal for crafty publishers. Now they can re-release their old GBA games to die-hard fans who are willing to pay to experience some of their favorite games a second time, as well as new DSi owners who never got to experience the joys of a GBA-compatible console. That’s what you get in the Mega Man Zero Collection: a re-release of all four Mega Man Zero games on one DS cart.

As someone who already owns all four Mega Man Zero GBA carts, I fit snugly in the first group. I really dug the Mega Man Zero games when they were first released, and I was psyched to get the opportunity to play them again on the DSi’s bigger, brighter screens. I was also hoping that Capcom would throw in some new features that would make the games feel fresh again. With this in mind, I booted up the Mega Man Zero Collection and got cracking.

If you want to know what makes the Mega Man Zero games worth playing, and what kind of new features Capcom added to this collection, hit the jump. You hit the jump right now! 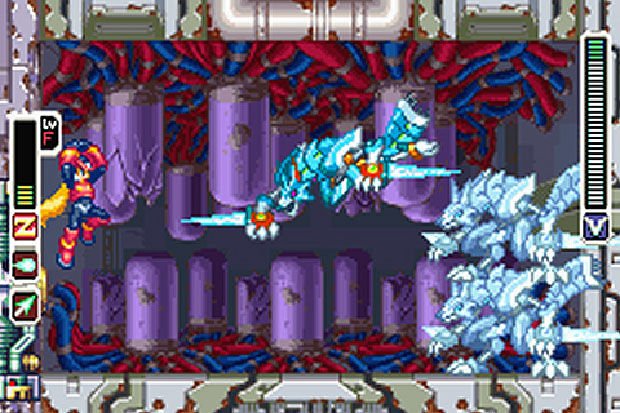 To that, I respond, “Well, did you play the Mega Man Zero games?” The answer is almost always, “No, they were too hard,” or “No, I didn’t think they were real Mega Man games.” After that, it’s an argument won. All I need to say is, “Well then, shut your hole. You want a new Mega Man ‘for real’? Play the Zero series. The games retain the core tenets of the Mega Man series, while adding a huge story, tons of new characters characters, beautiful 32-bit animation, original music, and a totally original combat system. Blow off a game like that? What kind of man are you? You’re worthless and weak.” 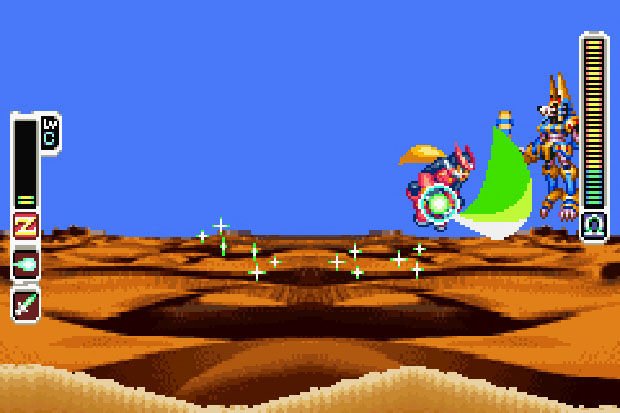 That usually leaves the crowd pretty quiet, but it’s just the start of my attempt to explain what Mega Man Zero is all about. Like most Mega Man games, the Zero titles are a series of side-scrolling action platformers where you murder a huge army of robots and steal their stuff. Unlike most Mega Man games, the Zero series isn’t about a little blue robot with a pea shooter and a heart of gold. These games are about Zero: a red death machine who uses pistols, lightsabers, shields, and multiple other melee weapons to fuck shit up.

Zero‘s combat system can be a complex affair, much more interesting than in Mega Man titles prior. Dashing, jumping, wall-kicking, and multi-step combos are all front-and-center. With two separate attacks available at all times, and four different equippable weapons (sheild, gun, rod, and saber), the action is much faster and deeper than what we’d come to expect. At times, the Zero series almost feels like a 2D Devil May Cry, with our titular hero blasting enemies from a distance and then dashing in for a blade combo, vaulting over enemies and attacking in mid-air, blocking and countering, and generally owning the battlefield with a fluidity and originality that most Mega Man(s) could only dream of. 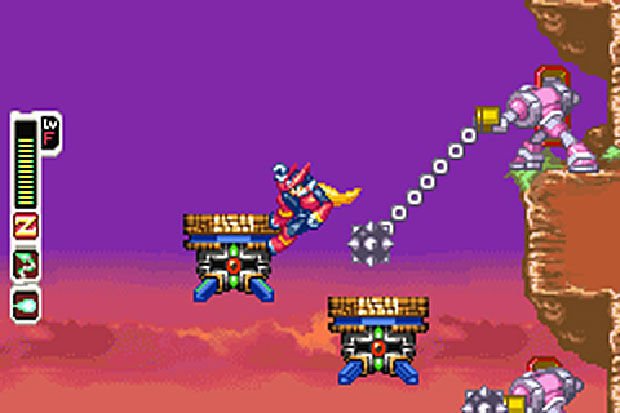 The depth doesn’t stop with the combat. Mega Man Zero 1 through 4 tell a continuous story that shows the Mega Man Zero world in great detail. It’s a very anime-flavored stuff, and quite well done. Unlike his appearances in the Mega Man X games, the Zero you meet here is a multi-dimensional character, with more to do than just stand around frowning, making X look like a wuss by comparison. The Zero here is a tool for mass destruction, initially used by nearly everyone he meets. In the first game, he fights at the command of others, but by the end of Zero 4 he’s learned to live and think for himself. He starts the series as a living weapon ends off as a self-actualized, self-determined hero.

Not only do the games allow you to witness the evolution of Zero as a character, but they also let you experience the evolution of a pretty interesting gameplay system. Each game adds significant tweaks to the way the games play, defying the “all Mega Man sequels are the same” stigma that’s haunted the series since Mega Man 2. Zero 1, with its sadly disposable cyber-elf assistant NPCs, large interconnected world, and multiple action-RPG elements, immediately sets the Zero series apart from the other Mega Man titles, and that’s just the start of the changes. 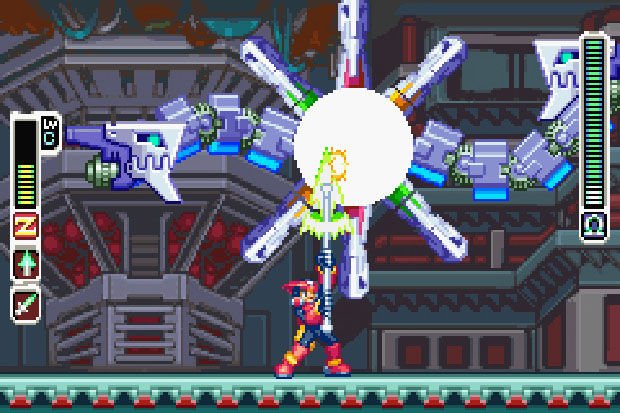 Zero 2 adds the Bionic Commando-esque chain-rod, allowing for grappling, swinging, and “Get over here!” enemy rendering for stylish destruction. Zero 2 also does a lot to encourage speed-runs and skillful play, rewarding players with special weapons every time they can beat a stage with an “A” or “S” rank, and special forms for Zero after meeting certain requirements. Zero 3 continues most of that, while adding the option to explore a Matrix-esque cyberspace, while swapping the chain-rod with the even cooler recoil-rod, and while adding tons of secret unlockables and mini-games. Zero 4 keeps most of that stuff, but ditches the rods entirely, and instead empowers you with the Zero-knuckle, a weapon that lets you steal any enemy’s weapons by absorbing them into yourself, Kirby-style.

Each game in the series really deserves its own review. They’re all great, with Zero 2 and Zero 3 being nearly perfect, and Zero 1 and Zero 4 trailing only slightly behind. Sadly, we don’t have time or space to get into the details on all that, so you’ll just have to trust me. Trust me forever. 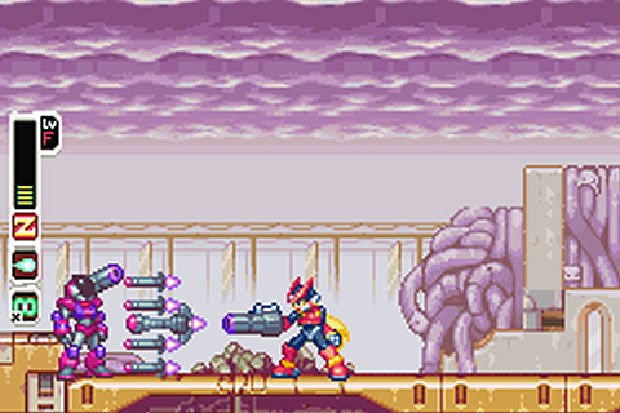 Beyond the obvious advantage to playing the games on the DS’s bigger, brighter screens, there are four features to this collection that you couldn’t get in the original games. First, you get some additional art, some of which shows up on the bottom screen while you’re playing, some of which is unlocked as you play, and all of which is viewable in gallery mode. The art is all at DS resolution, and it looks pretty nice. I’m familiar with most of the artwork here, as I own Mega Man Zero Official Complete Works from Udon, but it’s still fun to glance down and see a cool detailed illustration of the enemies that I’m fighting while I play.

The second new feature is the option to map “L” and “R” button moves to the “X” and “Y” face buttons. This may sound like a little thing, but seeing as the Zero games can feel like mini-beat-’em-ups that require multi-button combos and perfectly timed attacks, having all your actions just a thumb’s press away can make all the difference. Playing with the DS’s four face buttons is almost as big of an upgrade as going from a regular analog pad to a fight stick for a fighting game. 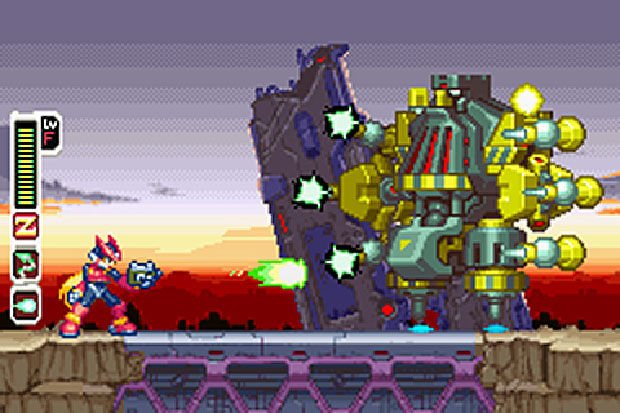 The third new feature only involves Mega Man Zero 3, but it’s sort of a big one. In Japan, Capcom sold a set of 100 e-Reader cards in conjunction with the release of Zero 3. Twenty of those cards are strictly collectibles, while the other 80 have game-altering effects after you scan them. All these cards are now unlockable in the game itself, with their in-game activation handled via the DS’s touch screen. Though a lot of the cards don’t do anything major (they mostly just activate some additional background items and pallet swaps), their inclusion here makes this the definitive version of Mega Man Zero 3. I imagine that having them available in-game might also frustrate Japanese fans who spent God-knows-how-much money on collecting hard copies of all these cards when they were originally released. I guess it’s just more evidence that physical media is slowly getting pushed aside for the cheaper, easier, digital download.

The fourth new feature is the ability to play all four Zero games in one interconnected run-through. This effectively turns the whole series into one 30- to 40-hour experience, faking it’s way towards the title of “longest side-scrolling Mega Man game ever”. It’s also one of the easiest, as it starts you off with a humongous life bar and four sub-tanks (which can refill said giant life bar at any time). Enemies seem to go down a bit more quickly as well. For me, this mode is nearly worthless. I was brought up to believe that an easy Mega Man game isn’t a real Mega Man game, and should therefore be ignored. That said, it’s nice that Capcom is letting the players decide how easy they want their Mega Man to be. 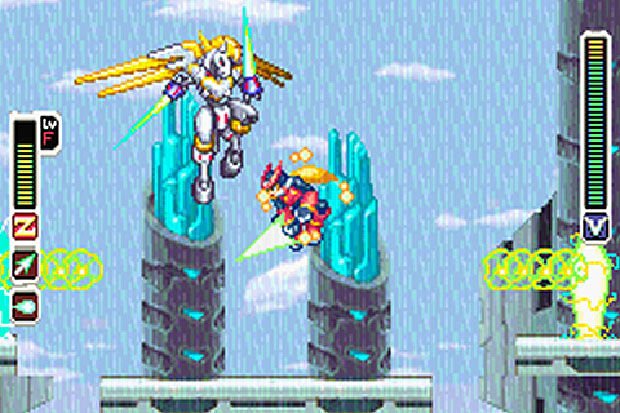 Will the Mega Man Zero Collection win over anyone who didn’t like the Mega Man Zero games to begin with? Maybe, thanks to the easier difficulty option, but that doesn’t seem to be Capcom’s target audience here. Like the Metroid Prime Trilogy and the God of War Collection, getting this many good games for this price is an unquestionable value. The Mega Man Zero Collection offers more hours of quality 2D action/adventure per dollar than any other game on the DS. The new features are just the icing on the cake, and for collectors, they’ll offer quite a few nice surprises. If you’re still rocking a DS Lite and own all four GBA games already, then you might not need this collection, but if you missed even one of the Zero games in the past, you’re sure to get your $30 worth.