For some, MechWarrior is a religion.

I was first introduced to the series in the ’90s from a fellow that had what I can only describe as a “battle station.” His chair was rigged with joysticks on the arms. He had a force feedback vest for when his mech was hit. He was even working on a jury-rigged VR apparatus years before it was popular. You could say he was the perfect gateway into the series.

For me, the BattleTech universe really clicked when I formed my own MechAssault team and became the top-ranked player in the world (no one could beat my Catapult) on a rankings system that was pre-MLG, pre-esports. So when MechWarrior 5 was announced, I was ready for it. 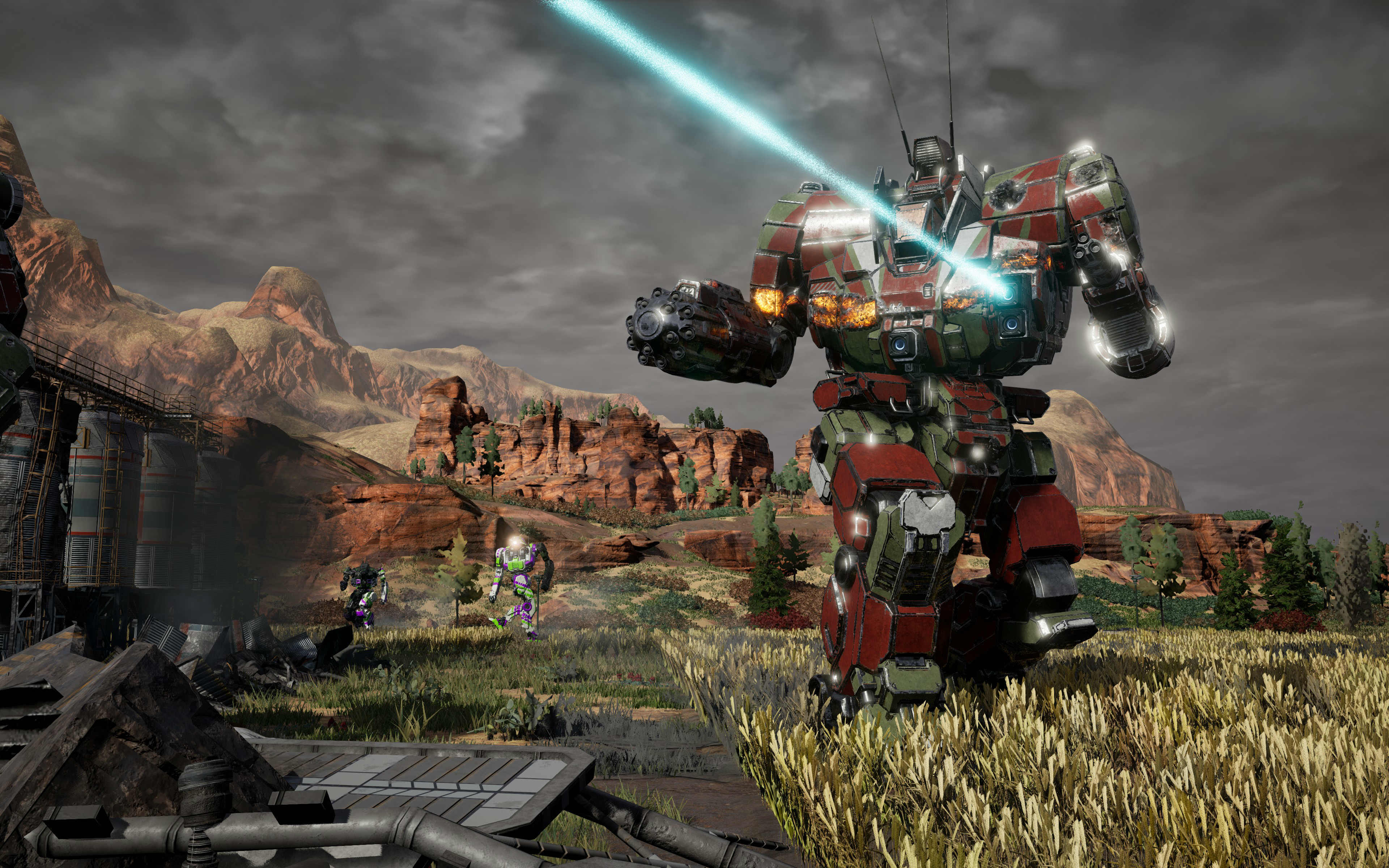 If you’ve never played MechWarrior before, it has a more simmy and tactical dance to it. Controlling your mech is half the battle, as you have the ability to individually maneuver bits and pieces of it, like the legs and the torso. It’s a unique kind of thrill.

If you want a full-on no-thinking action game, look elsewhere. You need to manage your heat not just for practical purposes like cooldowns, but to prevent a critical shutdown that leaves your mech completely open to attack. Acceleration is handled independently, so you can move at the exact pace you want, then strafe and rotate your guns (which you need to keep track of) to hit your target on the move. While you can technically use a controller, I wouldn’t recommend it (though specific HOTAS are supported).

You need nuances like the ability to shift your legs to align your body on a moment’s notice, as well as the precision aiming required to hit moving targets with sometimes limited weaponry. Speaking of: you can take out a mech’s legs, arms, or kill the pilot directly. This actually matters both short and long term, as tactical shots deal tons of surgical damage and allow you to safely harvest unharmed mech parts in the game’s story mode. Because of that open-ended approach to limb damage, you can get into some pretty harrowing situations: arms blown off, legs barely working, half your weapons disabled while you violently run for the extraction ship. It’s normal!

While that’s all happening, the particle and environmental effects can sometimes look a little cheap, but get the job done as they don’t interfere on a technical level. You can barrel through buildings with your mechs or jump-jet on top of destructible structures with no issues, which adds a very active feel to combat despite the aforementioned simulation leanings. I also haven’t encountered any major bugs outside of UI issues, compounded by the already rudimentary nature of the UI itself.

One of Mercenaries‘ biggest strengths is that it simultaneously focuses on campaign progression as well as procedurally generated micro-missions, all with co-op or AI support for three other pilots. This sort of ubiquitous free-flowing nature of modes is catching on elsewhere, and I’m fully on board with it. Now, the story tends to meander (especially at first) and the dialogue is often poor, but on a macro level, it’s ambitious.

The campaign has a lot of depth to it, spanning multiple decades (it takes place in the early to mid 3000s in-universe). I like how events like repairing your mech take actual in-game time, but zero player time (you can skip ahead days to get it over and done with). Pilot portions break things up and help dig deeper into the lore that makes the mechs tick. Light “negotiation” moments happen before each mission, allowing you to potentially salvage more items, garner higher C-Bill (the main in-game currency) rewards, or opt for a high insurance payout for damages.

How much risk/reward is involved is almost entirely dependent on your skill level, which is an interesting way to incorporate more simulation elements. Missions mostly have the right amount of pacing: short and punchy. You might need to take down a structure, defend an objective, or duke it out with another mech, with optional parameters popping up every now and then. When a locale starts to get benign (the core ones are ice, forest, canyon, and volcanic) you jet across to another planet.

You can also create and play custom scenarios or premade ones with MechWarrior 5‘s instant action mode. I’m happy to report that you can go HAM in free play, with most of the mechs or parameters you could want. I’m probably going to be dipping into this mode for a while, and while I definitely want it to be expanded over time, it’s a MechWarrior All-Star championship event. 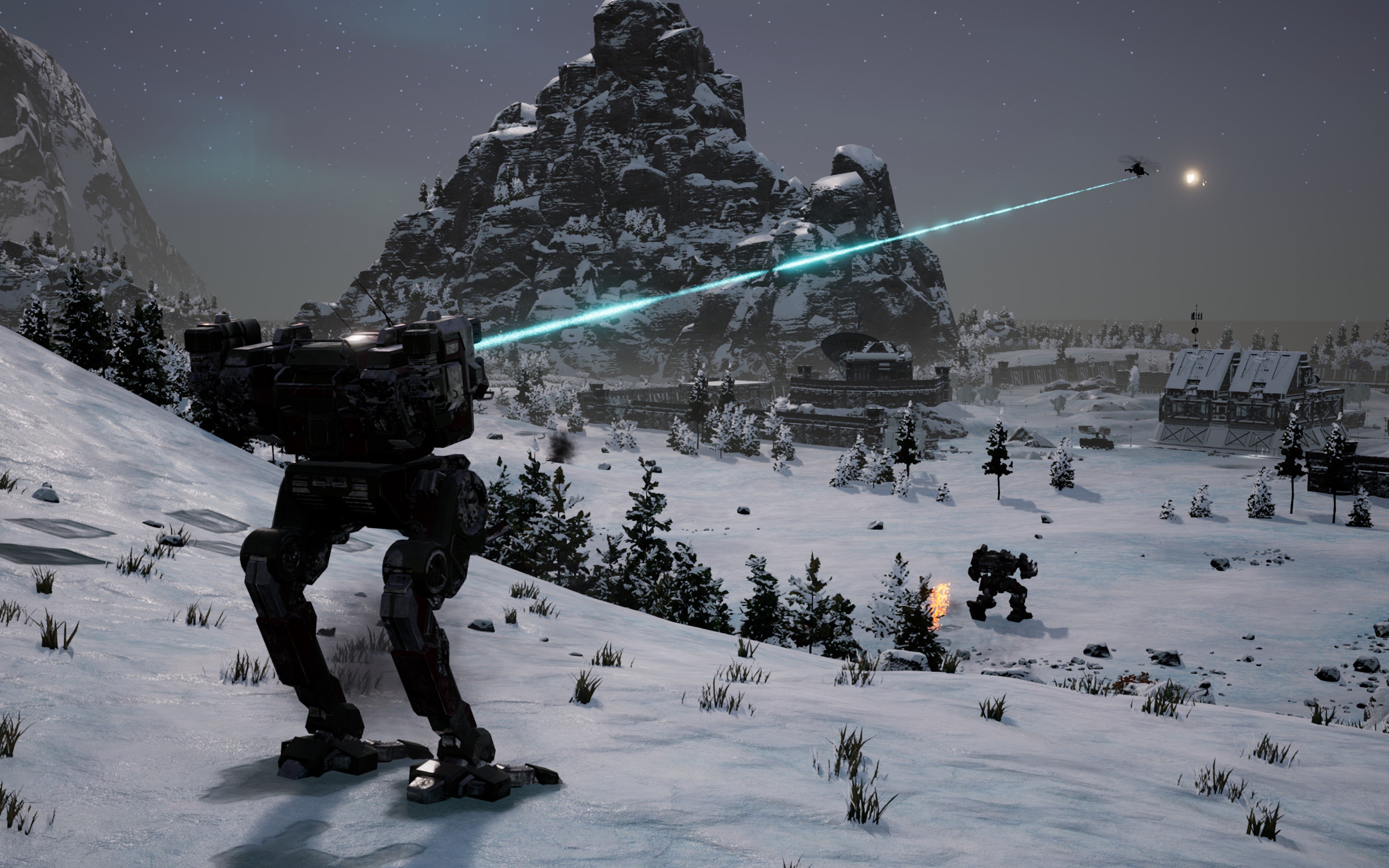 Even with an AI squad, instant action is fun as hell, and a veritable playground for trying out everything the game has to offer before you commit to the campaign. You can immediately see the potential here, like having a heavy Atlas mech running up the gut to distract an enemy force while a more fleet-of-foot mech pincers a group from above. Skirmishes can also get pretty hectic with tons of aerial and ground threats all in play at once.

It takes time to really get into MechWarrior 5, which is to be expected. At first, things go by at a plodding pace and your customization options are slim. But once you assemble your crew, jump into mechs you want to play as, and the story picks up, it starts to feel like old MechWarrior again. Mercenaries still might not satisfy everyone, but I enjoyed my reintroduction to the action-oriented BattleTech world.