“Andromeda is all about new beginnings, not holding funerals.” I overheard some generic leader telling his crew that aboard the Nexus, what is functionally Mass Effect: Andromeda‘s Citadel-like hub area. These people — the ones spearheading the initiative and the thousands more still in cryosleep — have given up their lives in the Milky Way and shipped off to the Andromeda galaxy in hopes that whatever’s there is better, or, at the very least, habitable.

So too is Mass Effect: Andromeda about new beginnings. More direct, it’s not a memorial service. Developer BioWare very sparingly makes any reference to characters from the Shepard Trilogy — it just doesn’t feel like that’s what we’re here for. This is a Mass Effect game in name only. Sure, there’s a lot that’s recognizable. The presentation looks the same and many of the proper nouns are familiar. But this isn’t something that latches onto its past.

Commendable as it might be, Mass Effect: Andromeda may have been wise to take more cues from previous games. 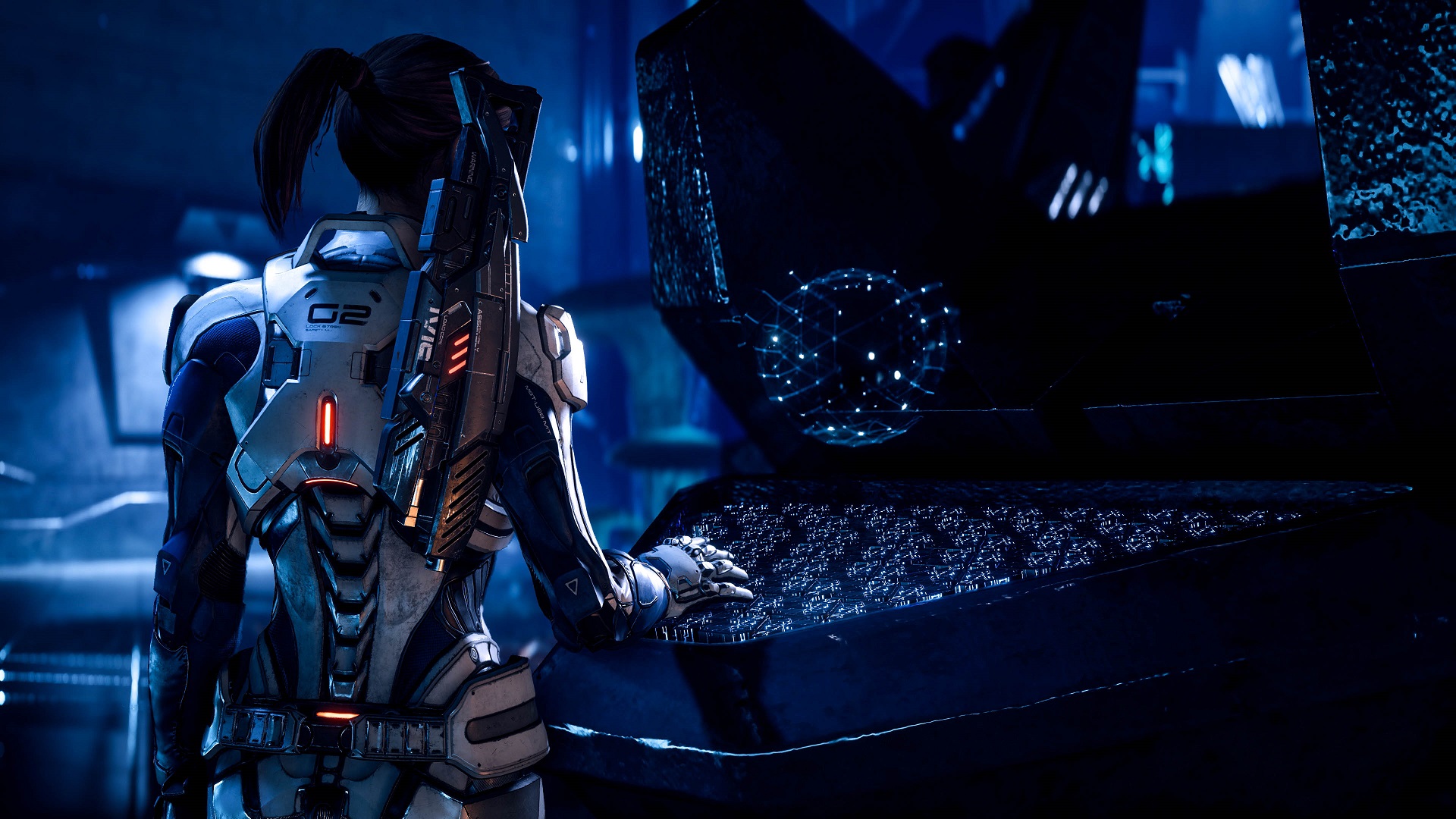 Exploration is the central theme of Mass Effect: Andromeda because protagonist Scott/Sara Ryder (depending on the gender you choose) is the person in charge of founding outposts on the “golden worlds” — the planets that have been scouted ahead of time as perfect candidates to live on. All that intel turns out to be wrong and none of them are immediately ready to support life.

The goal pivots to making these planets viable homes, usually accomplished by slowly cleaning it of environmental threats. Eos, the first of these planets we come across, is plagued by radiation. As Ryder completes various tasks (some in the main storyline, some side missions), the radiation eventually subsides. This allows for more of Eos to be explored, which, in turn, allows for completing more tasks to make it even more viable. It’s all very cyclical like that.

It’s also all very dull. Mass Effect: Andromeda struggles to find a foothold because it spends far too long without an easily-identifiable conflict. In Shepard’s arc, the Reapers were out to purge all life and essentially reset the galaxy. Shepard and crew had to stop that. The threat was imminent and constant. It was easy to point to the Reapers and say “That. That’s what we’re fighting. That’s why we’re here.”

Andromeda isn’t like that. It’s so concerned with shrouding itself in mystery that it neglects giving us any real reason to trudge forward. At least it’s thematically consistent in the way it emphasizes exploration, making the player venture into the unknown as Ryder has to do the same. It’s just that driving across miles of barren desert in hopes of finding something interesting is inherently uninteresting.

Instead, Andromeda raises question after question about things that aren’t quite directly related to Ryder’s objective. We’re there to settle down and establish a colony. Learning about these new enemies — the uber-aggressive Kett aliens and the synthetic machine Remnant race — feels somewhat tangential even if exploration is largely about gathering information. We’re asked to put faith in the fact that this is going somewhere significant. It eventually does, as things pick up somewhere in the second act. The latter third is entertaining, mostly because Andromeda is finally forthcoming with what’s happening.

The plot problems bleed into the overall mood of the game. At times, this feels like a bizarre take on Mass Effect. Too many characters are relentlessly upbeat and positive. A new beginning is an angle brimming with hope, sure, but not nearly enough people approach this scenario with believable trepidation, caution, and concern. 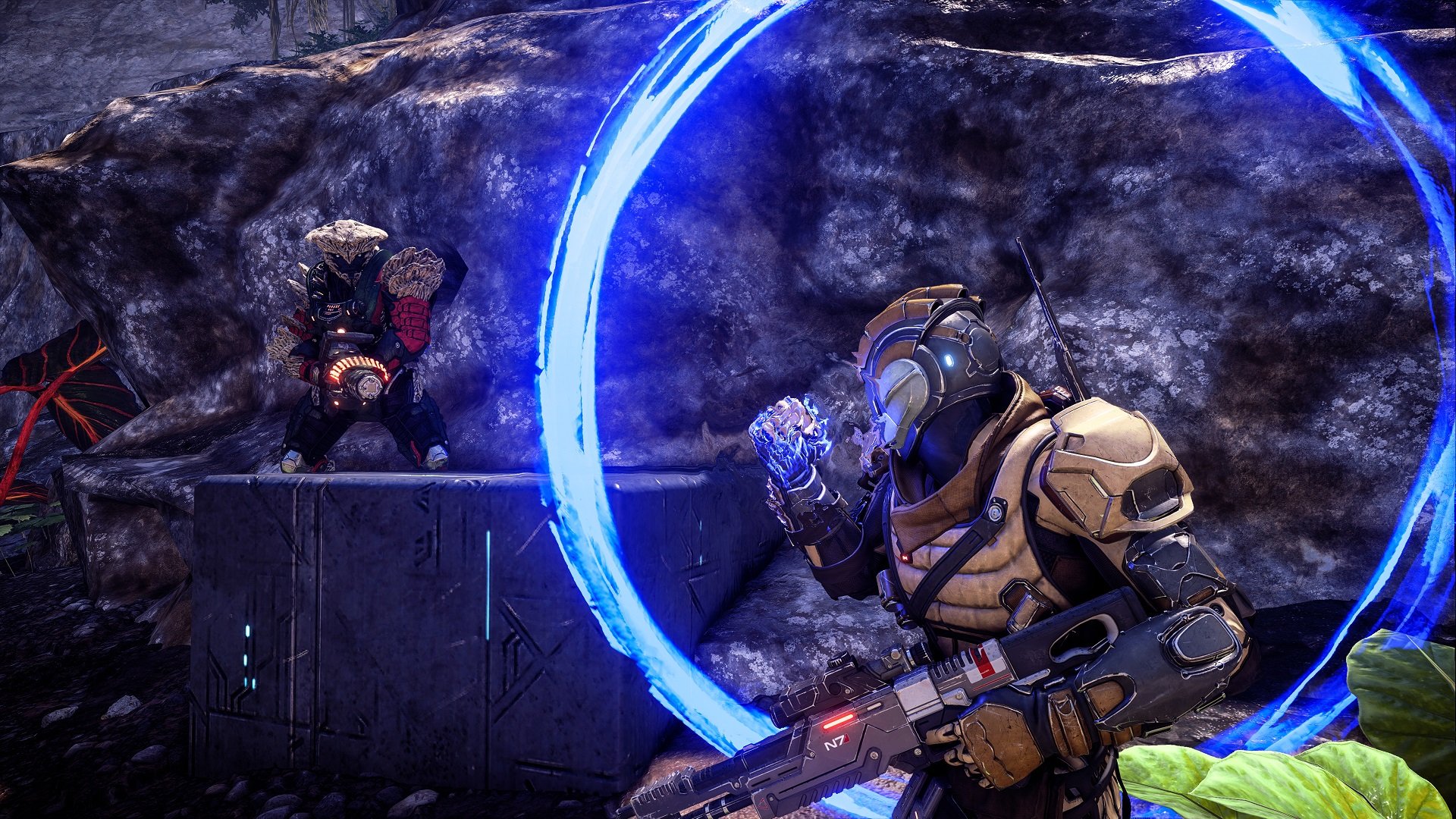 Tonal issues are a major problem until Mass Effect: Andromeda narrows its scope enough to focus on one thing. (I can’t get over an early talk where a Krogan essentially hand-waved the Genophage away under the logic that it was a long time ago and let bygones be bygones.) Unchecked optimism permeates too much of this game. It’s all so vanilla.

The new conversation wheel has a lot to do with it. Gone is the classic Paragon and Renegade dialogue options to firmly establish your character as a good guy or bad guy. Replacing it is a more nuanced system of answering either logically, emotionally, casually, or professionally. Rarely does it feel as if it’ll make a difference. Often, all the answers seem functionally the same. It’s so hard (maybe impossible) to make Ryder into an asshole. It’s more about how sappy or dopey you want them to be.

Again, it doesn’t matter much. There’s so little pretense that Ryder’s decisions will set off a political firestorm. It all feels like the means to the same end rather than wildly different ends (or at least different ends that you’ll actually notice). At one point, I made a tough call that ended with some Krogans dying. Drack, my Krogan squadmate, was understandably upset. That lasted for all of 15 seconds. He was back to normal in an alarmingly disproportionate amount of time. 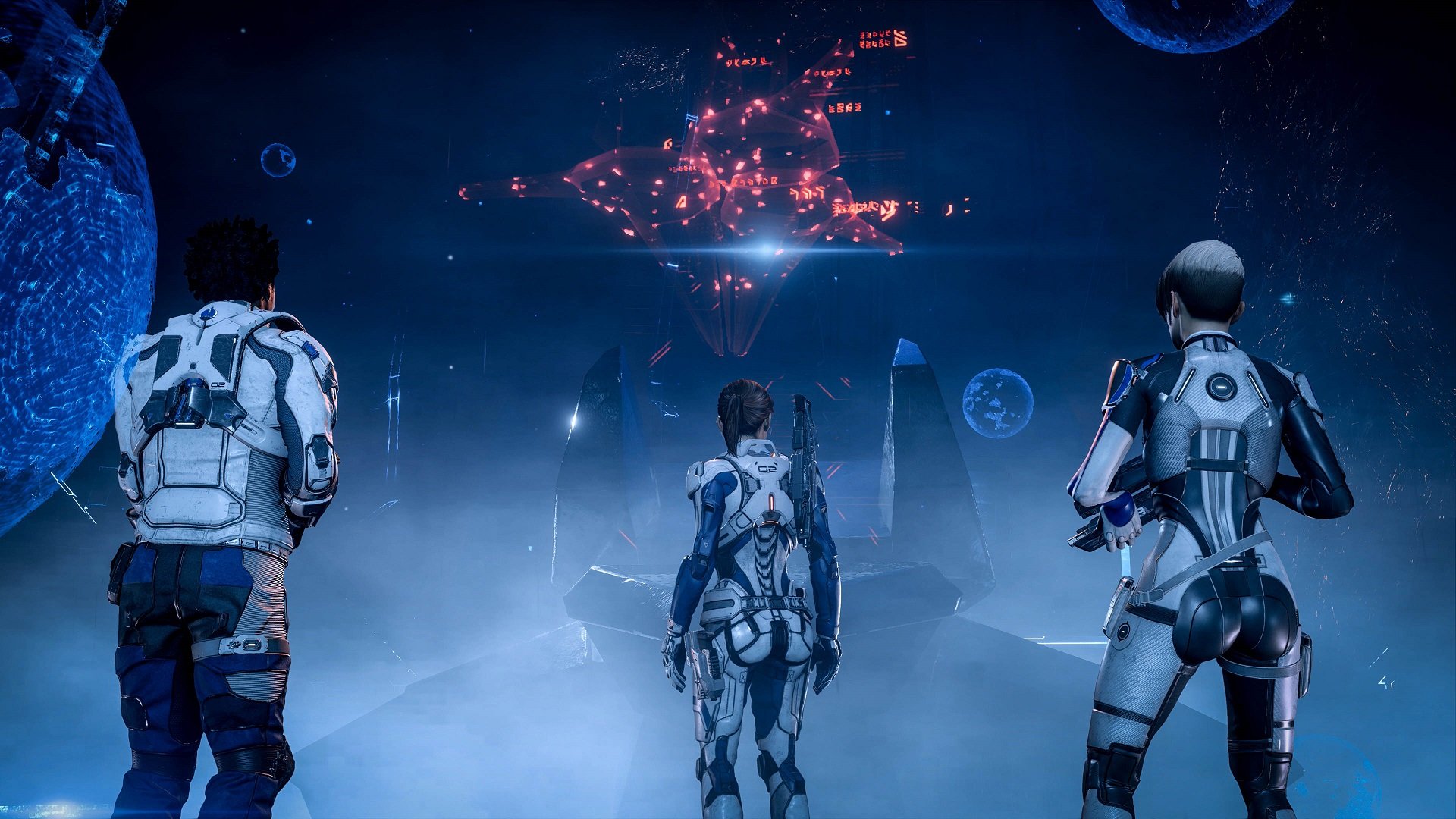 It’s kind of ironic that Mass Effect: Andromeda funnels the player into a mostly-linear narrative because the worlds have been expanded to be mostly open-world. With this comes the constant pull of side missions. Almost everywhere you go, there will be another marker signifying that there’s something to do for a quest you aren’t actively pursuing. It’s a staggering amount of content, enough that the in-game mission tracker will often have a tough time keeping up.

Because the structure is exploration-oriented, it’s futile trying to guess which of these are actually important. So, the allure is always there to do whatever’s in the vicinity. There’s a fear of missing out, the knowledge that any of these side missions could manifest into something greater. As a personal anecdote, I did a fairly innocuous quest that resulted in a grander boss fight than anything in the critical path. Who knows how many of these special moments Andromeda is hiding?

That boss fight (and all fights, really) are enjoyable because of Andromeda‘s most significant addition to the series: A jump jet. Combat is far faster and more movement-based than in the past. The opposition is designed to flank and to flush you out of cover, making this game more Vanquish than Gears of War. Sitting still for too long is a death sentence, even with biotic powers and two teammates on your side.

It works really well. It takes a while to get into the mindset of always moving, and there will almost certainly be some early deaths. Enemies seem tougher than they have in past Mass Effects, but there’s a reliable flow to it all once you adapt your strategy. If nothing else, fighting is always intense because there’s almost never a way to rest for long. 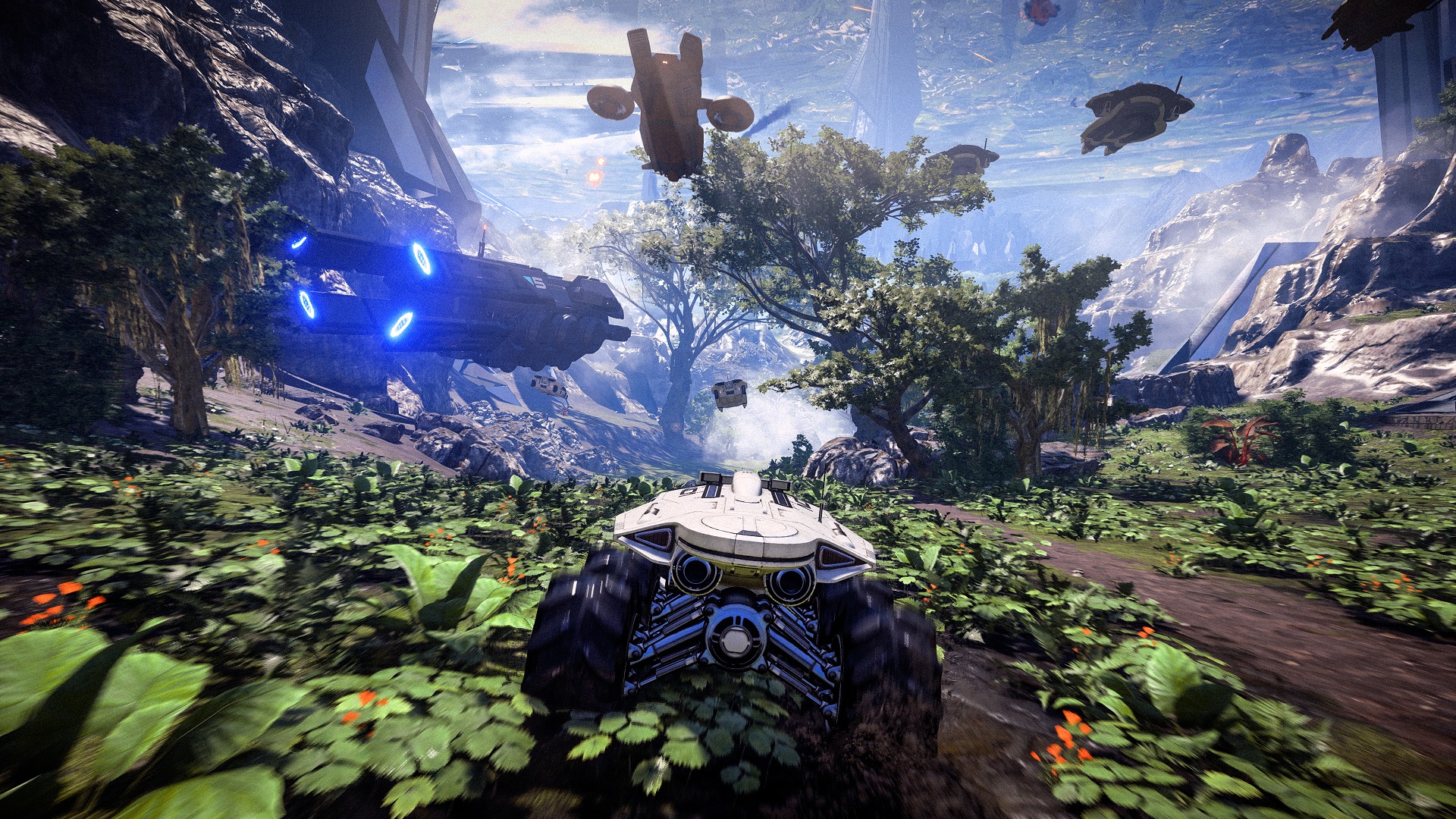 The role-playing aspect of combat comes from a tried-and-true system of assigning skill points to powers and attributes, but it also comes from a less intuitive crafting component. Ryder must regularly scan the environment to earn research points, use those points at a station to develop blueprints, and then finally craft them from acquired resources.

It’s overwhelming deciding what type of technology to invest in (human, Kett, or Remnant) and trying to figure out if it’s better than what you’re already using. Or, if it’s better than something else in your inventory that you don’t have equipped but should. Or, if there’s something in the store that you should just buy instead. Or, if it’s worth waiting just a little longer and crafting something that will unlock soon. This is confusing bloat that unnecessarily bogs everything down.

Where that’s pared down is in the cooperative multiplayer. Mass Effect: Andromeda sports a four-player wave-based horde type, almost identical to what was found in Mass Effect 3. There’s a leveling system for unlocking new powers and a crate system for getting new weapons. This is important because multiplayer is prohibitively punishing at first. 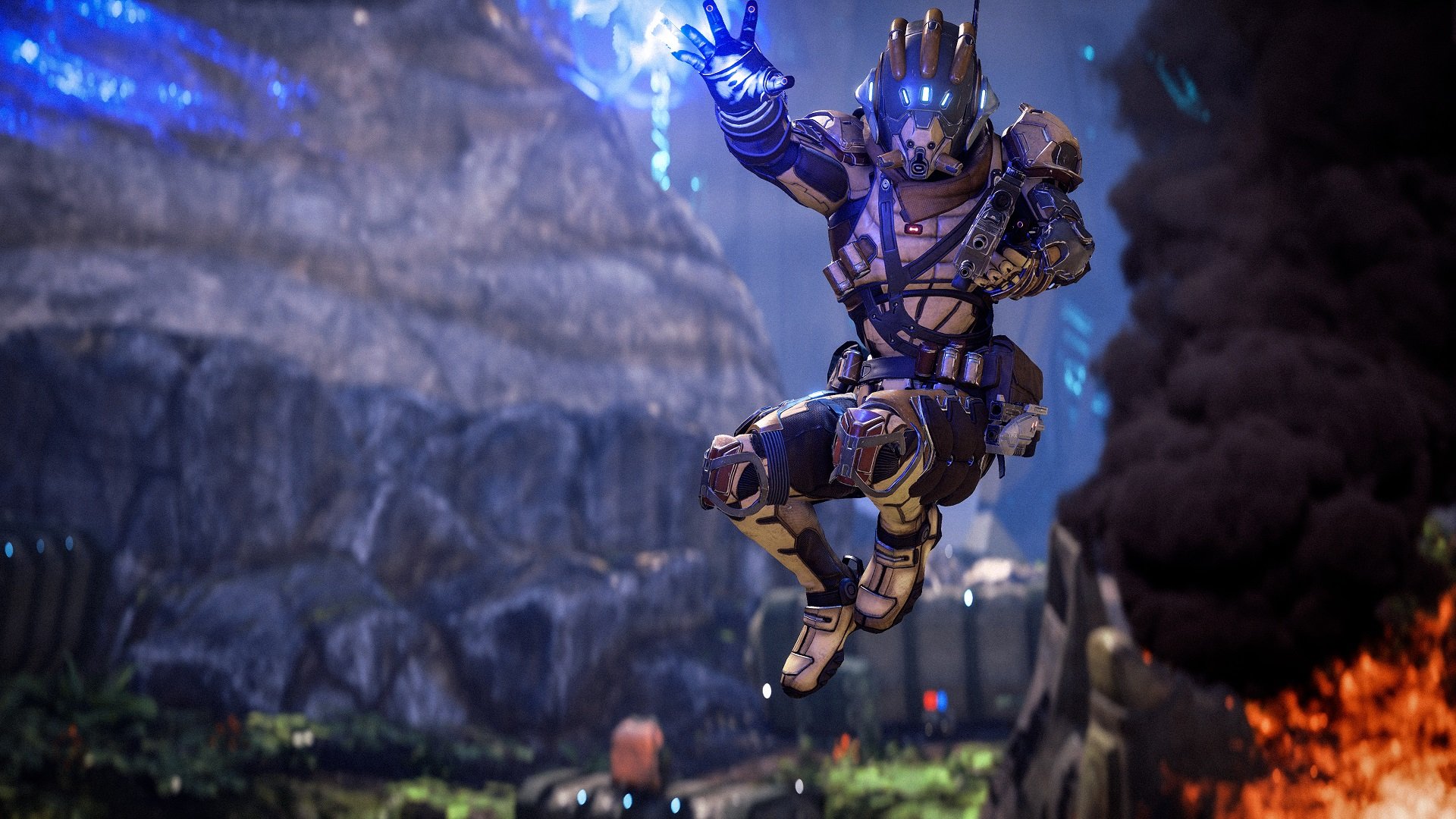 In the early going, our four-player squad had a hard time surviving bronze-level challenges (bronze, silver, and gold are the difficulties). Our weapons were underpowered and our skills didn’t do much. Putting time in, taking your lumps, is the only way to change this. Well, that and the microtransaction-fueled crates that give out, among other things, armaments. (It’s worth noting that playing multiplayer accrues points toward buying these, but the top-tier ones seem a long ways away without just forking over real money.) That said, I’m not convinced the crates change the progress arc too significantly; it feels like better weapons probably unlock relative to your level.

For those who are likely to shy away from teaming up, the single-player campaign has a hands-off multiplayer component built in. Strike teams are accessible through certain terminals that allow Ryder to send squads on missions in hopes that they’ll succeed and earn some multiplayer rewards. These missions aren’t quick though, as some take more than three hours to complete. Fortunately, you don’t have to worry about it as you gallivant across the Andromeda galaxy.

And gallivant you will. Being immersed in this brand new world is intriguing, even when there’s not much happening. Mass Effect: Andromeda‘s flaws are noticeable and hard to ignore. But, eventually, it becomes easier to live with them. Something will push you along, maybe the spirit of discovery that’s omnipresent.

Mass Effect: Andromeda spends a lot of time not really feeling like a Mass Effect game. If anything, it feels like a spin-off — the sort of thing created by another studio that’s unsure about what direction to take it. Like in the game itself, there are problems with the atmosphere. But Andromeda is very clear that it doesn’t aim to be like the other Mass Effects. New beginnings, not funerals — for better and for worse.