Getting its start in stereoscopic 3D on the Virtual Boy back in 1995, the Mario Tennis series has returned to its original roots with Mario Tennis Open on the Nintendo 3DS. It’s been seven years since we’ve seen a brand-new Mario Tennis title, with the last new entry launched on the GameBoy Advance back in 2005.

Every Mario Tennis game was seemingly better than the last, making the series a fan-favorite out of all the Mario Sports spin-offs. Every title had its own set of additions that expanded on an already satisfying amount of content. Mario Tennis Open doesn’t particularly continue this tradition, but has enough of its own charm to keep fans of the series coming back for more. 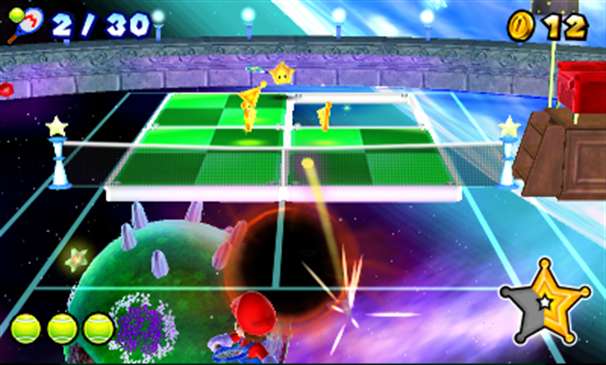 There’s not much depth to Mario Tennis Open at first glance. You pick from an assortment of Mario characters and, well, you play tennis. There’s no story, and there’s no reason as to why Mario and Bowser are playing tennis against each other over a golden banana trophy. To be fair, it’s probably better that way. Still, it would have been nice to have some sort of reason for picking either Tournament, Exhibition, or Special Games and just start playing.

The game controls better than ever. Players can either use the circle pad or d-pad to control their character, while the face buttons control the inputs for each of the shots. The 3DS’ gyroscope allows for a new way to play. By tilting up the system (which also turns off the 3D effect), players can turn their 3DS to where they want the ball to go. It’s certainly an interesting way to play, but after a while gets tiring and the novelty wares off. Personally, I had the gyroscope controls off for most of my playtime. If the ball is hard to reach, players can roll by pressing R to save the ball. All of the shots can be found on the touch screen, making it easier than ever to pull off any shot at any given moment. 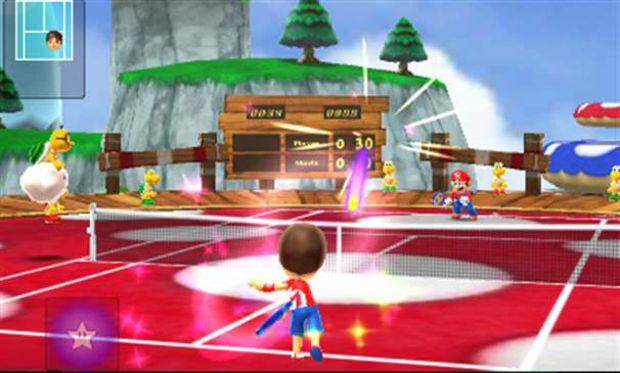 In Tournament, you go through a series of — you guessed it — Tournaments in either singles or doubles. Besting the first four cups with a single character gains said character a star ranking, which will unlock the much more difficult second set of cups for them. Exhibition lets the player set up their own matches with whatever rules, characters, and stage they choose.

Where the game truly gets interesting is in its Special Games section. The first one players will notice is “Ring Shot,” a mode where you volley back and forth against a CPU player while trying to get the ball through the randomly appearing rings on the court. The next is “Super Mario Tennis,” a mode where the player stands in front of a giant screen and plays Super Mario Bros. by hitting the ball at things they want to pick up or go through, with the final goal being to hit the flag at the end of the level. 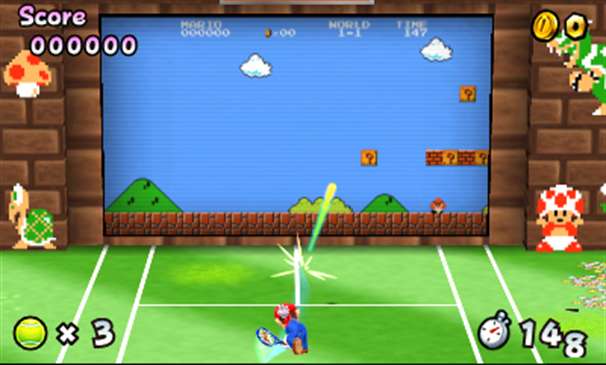 “Galaxy Rally” puts the player on a Super Mario Galaxy-inspired stage where the opposing court is split into four parts with pieces of star appearing randomly on them (their only purpose is to give you extra coins). The goal is to volley back and forth a certain amount of times while avoiding one missing section of the court. “Ink Showdown” has the player on the opposite side of one CPU opponent and three Inky Piranha Plants that shoot tennis balls and ink balls at you. Hitting the tennis balls past the CPU opponent a certain number of times wins the round.

Each of the modes has increasing difficulties, and each particular mode has its own unlockable character. They’re all fun to pick up and play, with “Super Mario Tennis” being especially fun. They’re perfect modes to help you get better at the game and teach you how to best use the many shots. Special Games is also the only place where you can get coins which allow you to buy clothes and rackets for your Mii (which also boosts their stats). 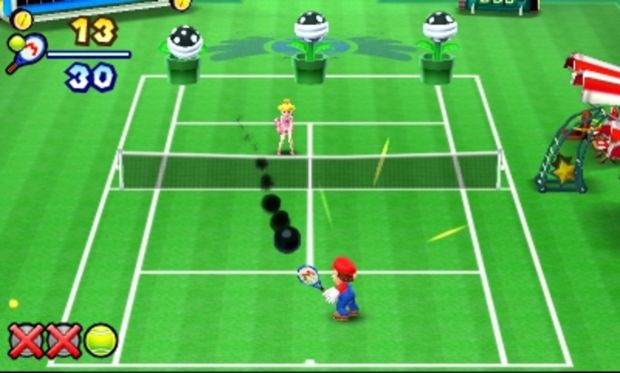 In multiplayer, the player can set up their own matches (or join them) for local or worldwide play against their friends. They can also choose to play against random players in quick or extended matches to increase their rating and leaderboard position. The matches I played went smoothly for the most part, with only a few that were disgustingly laggy. I also lost pretty much all of my matches, because most of the players were really good.

Mario Tennis Open feels a bit lifeless at first, simply because it doesn’t give any other incentive for playing than to keep unlocking things and to just play more tennis. Modes from past entries — especially the RPG mode from the GameBoy Color Mario Tennis — are sorely missed. With new minigames like “Super Mario Tennis” and many ways to play, Mario Tennis Open will keep players coming back who just want to play a quick few rounds of tennis, unlock new characters and stages, and buy new clothes for their Mii.