Wait! Where are you going?

Portable mahjong games aren’t going to hold up to all the high profile fall and holiday releases that are coming out, especially with this year’s huge line-up. But what if I told you that this particular mahjong game was in 3D, and that it turned the classic time waster on its head with 3D controls? Still no? Fair enough. Hey, I think it’s cool. It may not be your Call of the Battlefield: Revelations, but it’s a good time for your 3DS, especially for puzzle game fans. 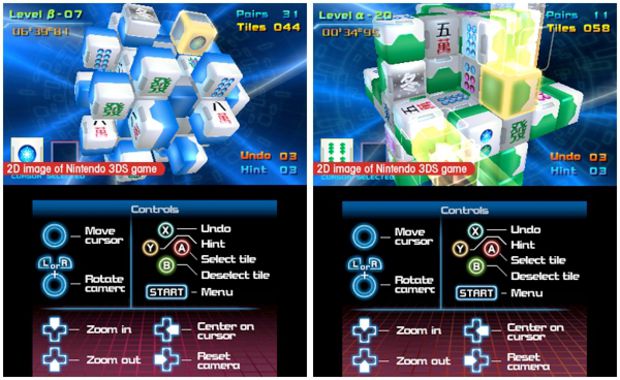 Classic mahjong has you matching tiles to remove them from a pile, two by two, with the goal of taking them all down without breaking the age old rules of removal. You’ve played this before on a phone or on an old Windows PC, I’m sure. In Mahjong Cub3d, you’re still matching tiles to remove them from the game board, except this time it’s not really a board, but more of a floating shape in 3D space. Yes, it sounds strange, but stick with me here.

Floating mahjong in 3D sounds like something that wouldn’t work, but it really does. It works well enough that my first play session, which I only intended to be a quick introduction, lasted about 2 hours. I ended up taking my 3DS to bed and played until I got sleepy.

The game slowly eases you into its 3D Cube Mode with some simple puzzles. You’ll match tiles, which are now actually little cubes, on or in some basic shapes, like larger cubes and other geometric designs. Like in classic mahjong, you’ll pick from any of the available ‘free’ tiles to match them to other ones. In this mode you’re working against a countdown timer, but the basic shapes of the mode’s alpha stages are pretty easy. They’re easy enough that they’ll let you get used to rotating and manipulating the shapes. You’ll turn these shapes in any direction by holding down either the L or R button and pushing a direction on the circle pad, while the d-pad lets you zoom in and out. Tile selection is done with the circle pad and it works surprisingly well. I assumed that trying to select a little tile among a bunch of others in 3D would be troublesome, but somehow they made it work.

When you get good at the alpha level of puzzles, beta steps it up a bit, and then it gets nuts with complexity from there. Worry not, as the game slowly eases you into it by gradually increasing the difficulty with each puzzle. As you complete puzzles you’ll unlock additional ones. I’ve been playing Mahjong Cub3d almost non-stop since I received a review copy, but it feels like I’m nowhere near seeing all of the available puzzles.

In classic mahjong, if a tile is buried under another, you cannot remove it. This rule is still in play in Mahjong Cub3d’s Cube Mode, but being able to freely rotate the game’s board in any direction forces you to think a bit harder about what tiles to remove. You’ll also have to rotate the game board to see its undersides, sometimes even down inside a shape, to see the tile types. You’ll have to keep your eyes open and stay alert so that you can match tiles from all angles. The 3D doesn’t make for a hard game, mind you. It just increases the challenge so that it never becomes mindless. They literally took this time-wasting standard to the next dimension. 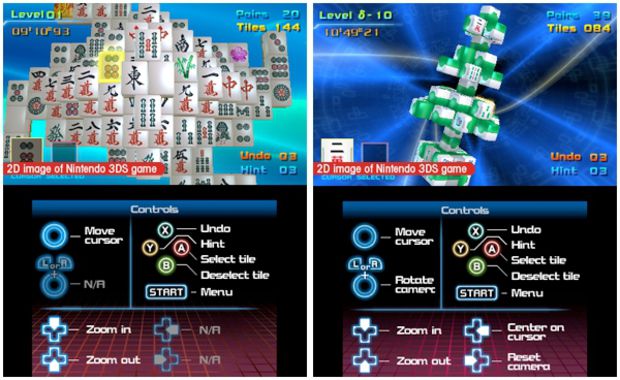 There is a classic, non-3D mahjong mode included, but it’s not very good. The main problem lies with the tile selection method, which is done with the analog pad. I was driven to near insanity in less than five minutes trying to select the little tiles in this mode, and the zoom in/out controls do not help at all. Worse, the angle that the board is presented at is tilted back just enough to be fully frustrating; good luck trying to see some of the lower level back tiles behind a large pile. The final kick in the eye is the too-large countdown timer, which moves so fast that it makes you nervous and unable to concentrate. I truly hope that gamers try the perfectly fine 3D mode before trying this standard version, as it seems tacked on and rough.

My only other gripe is on the music. It’s bad. Like, volume switch to minimum at all times bad. Distracting and regular bleeps and cymbal crashes are not a great idea for a game that requires concentration.

I can’t give you much more here: Mahjong Cub3d is simply mahjong in fully rotatable 3D. I can tell you that it’s easy to get into and control, and that it seems to have this gravitational pull on me as a puzzle game fan. I’ve always liked mahjong, and this 3D twist on the classic formula makes it even more enjoyable and challenging.