I was a late bloomer when it came to Lumines. Unbeknownst to me I skipped over that whole step and moved on to Q Entertainment’s next hit — Meteos. So when everything came full circle years later, I was ready to embrace its greatness.

After all this time, Lumines is still great. 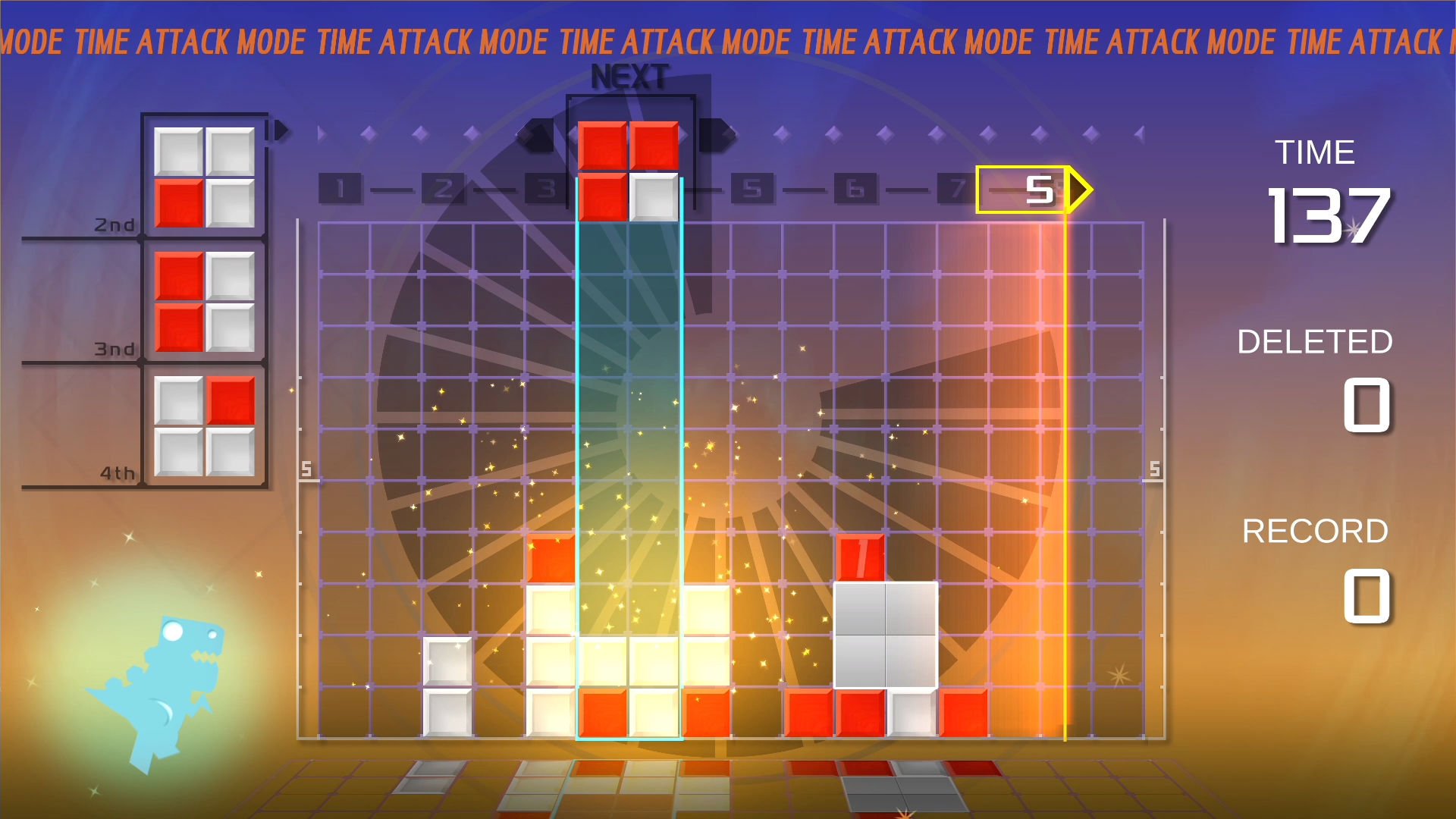 If you’ve never played Lumines before it epitomizes the “easy to learn, simple to master” mantra that so much of its ilk do so well. The game board is presented in a grid-like format, with square blocks consisting of two different colors. Your objective is to match up 2×2 blocks of the same color, which creates a scored cube. From there you can quickly match up more of the same color to add to the completed cube or work in combos to drop cubes into each other for exponential amounts of points.

The catch is that the whole time music and bright graphics are booming and fluttering about respectively, set to the tune of a giant metronome bar that continuously skirts across the screen. Matches are cleared when this bar hits your cubes, so you’ll need to time certain moves to the beat/bar if you want to net the highest score possible. That’s basically all you need to know, and setting up various advanced combos and sneaking in extra points before the bar can clear them is where you get your skill ceiling from.

Due to its simplicity it’s addicting and easy to pick up, especially when it’s backed by catchy electronic tracks and enhanced visuals, which go up to 4K on every machine but the Switch. On the flipside, Nintendo’s console/portable hybrid allows you to take it on the go; a fitting option for a series that started on the PSP.

So long as you’re not expecting a story mode (which would require a lot of legwork and probably a ton of cute space aliens like Puyo Puyo Tetris), Lumines Remastered has pretty much has everything you’d want.

Challenge functions as a proper arcade mode, offering up sequential levels in addition to an endless mode. Then of course there’s the various reconfigured cores like time attack and mission mode (the latter of which was previously found in Lumines II), as well as straight-up versus CPU and offline two player competition. Puzzle, the wackiest mode, is probably the one I gravitated toward the most — its simple siren song of shape requirements is a bit more critical than the hectic pace of the other gametypes.

So most of the “remastered” port is the same, with the exception of a really silly feature added in at the behest of legendary producer Tetsuya Mizuguchi. Dubbed “super-rumble,” Lumines Remastered allows you to add up to eight Joy-Con remotes (or four DualShock 4s/8 Xbox One controllers) to buff up rumble. Mizuguchi encourages players to sync multiple controllers to “feel the bass across your body,” a feature I tested out with four Joy-Con — two in my hand and two in my pockets. It’s not something I’m going to go out of my way to set up constantly, but it brought a smile to my face at least once, which is something. 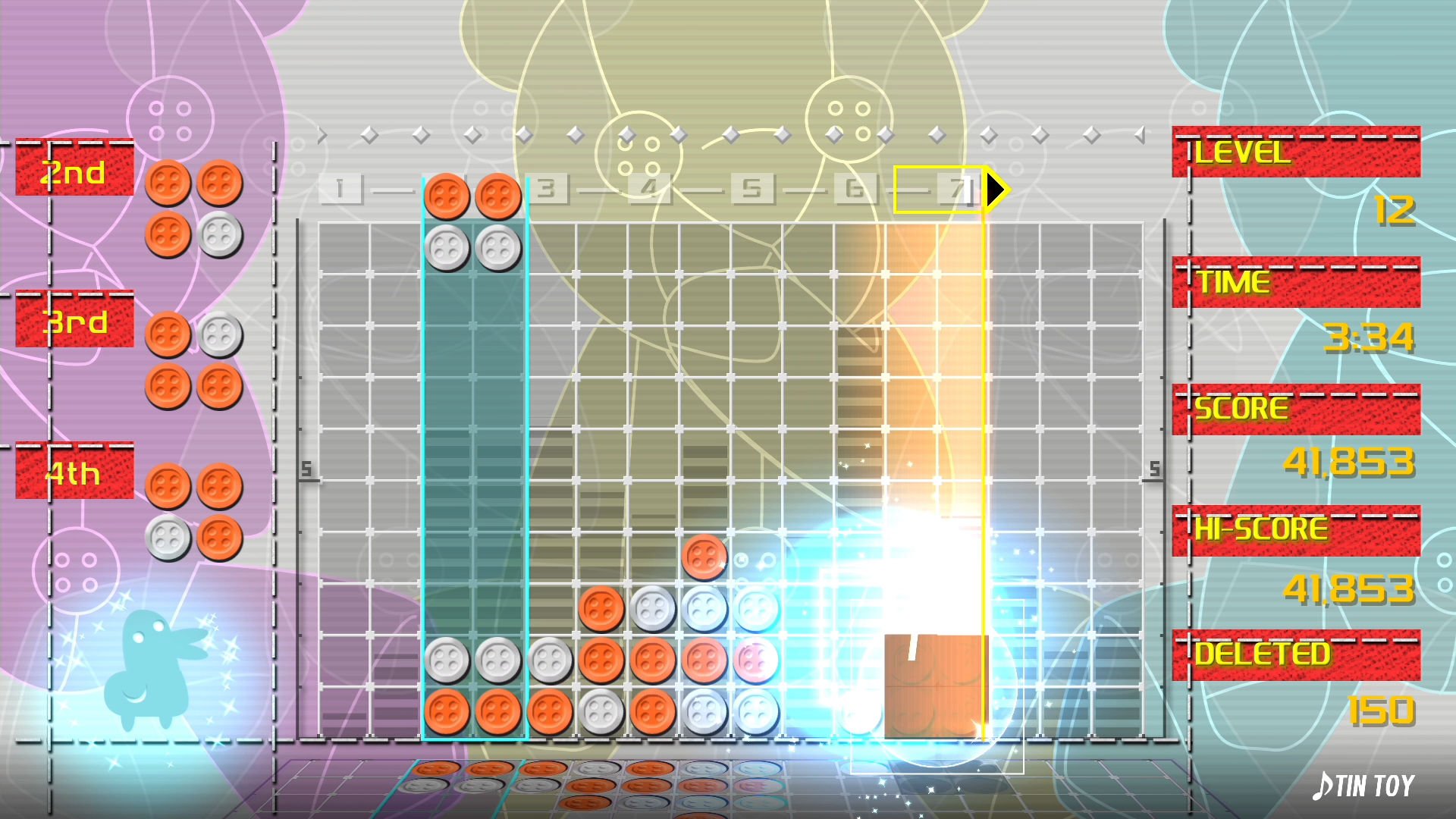 Lumines didn’t need to reinvent the wheel for its remaster as it already had its base down pat. If you already own it you likely don’t need to revisit it on a modern machine as the re-release doesn’t really add anything you haven’t seen before, but this is a great way to discover the magic for the first time.