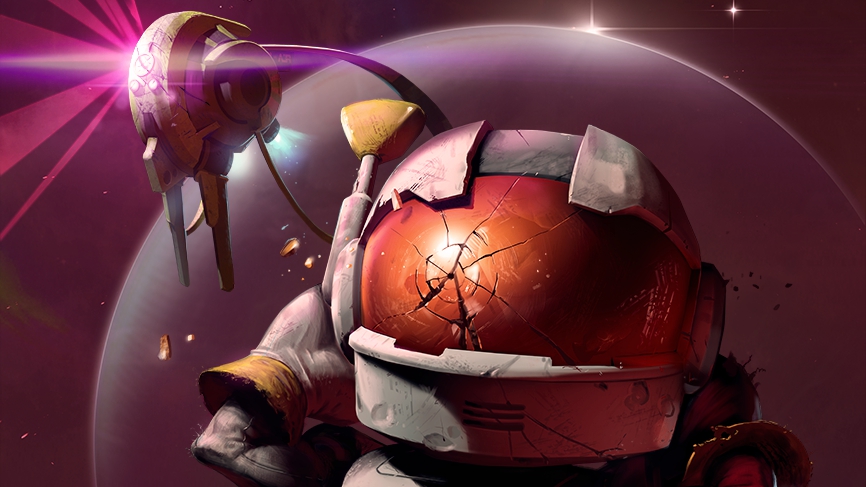 Flying through space can be great with all of the right tools. Automated navigation systems and high-power lasers can get a vessel through an asteroid field with little incident. Flying solo with just a jetpack and human reflexes, not so much.

That’s the predicament protagonist Harrison finds himself dealing with in Lost Orbit. His ship was destroyed while he was spacewalking outside of it, and now he has to get home using only his suit’s thrusters. Often, this ends with him leaving a thick blood smear on a nearby rock. Sometimes his skeleton leaves his squishy parts and keeps moving forward.

Described as a “dodge-’em-up” by developer PixelNAUTS, Lost Orbit doesn’t fall neatly into any one established genre. Harrison has no projectile weaponry, so shoot-’em-up isn’t accurate. One of the secondary objectives is to complete levels in under a certain amount of time, but it isn’t exactly a racing game either. Each level has the same basic goal: get from one end to the other without being smashed, crushed, dismembered, or otherwise destroyed by any of the many environmental hazards.

To begin, Harrison has only a few tools at his disposal. He can hit his thrusters to move forward and he can turn. By collecting Obtainium, he can upgrade his suit with new abilities like a barrel roll, mega boost, and the ability to brake.

Risk and reward are central to Lost Orbit‘s design, and that comes through in the boost ability. By the end, Harrison has a huge stockpile of fuel to use and it allows him to go much faster than normal. A skilled player can shoot for platinum times by cranking down on the boost and never letting up. An unskilled player who tries that will often smash Harrison into a rock.

Peppered throughout the environment are objects more helpful than wayward asteroids. Some planets can be orbited by approaching them slowly. This replenishes and usually offers up a safe spot to collect oneself. Conversely, these planets can also be used to gain a mini boost. To activate it, Harrison must fly close to them with his thrusters on.

This sets up its own little risk/reward scenario. Players going for platinum scores will want to blaze past these, but there’s a limited window for success. Too far from the planet and no boost is awarded. Too close and well, you can guess what happens when an astronaut goes careening into a solid planet. This is probably one of the smartest pieces of design in the game; it’s a single environmental element that serves a different function depending on the style of the player.

There are other helpful/dangerous objects to find out in deep space. Gas planets can be flown through for an extended speed boost. Pulsars bounce Harrison off in a predetermined direction. Liquid planets hold the astronaut still before he choose a direction to shoot out. When everything comes together, it’s almost like a game of pinball, where lights are flashing and objects are ricocheting and the player is right at the sweet spot of control. While maintaining high speeds the player doesn’t have complete control over the situation, but always enough that it doesn’t feel unfair.

Supporting the gameplay is a poignant narration from an artificial intelligence drone (who sounds a little bit like our own Conrad Zimmerman). It isn’t some grand story about good vs. evil, but instead takes a look at being human, growing up, and finding freedom. Forced into a perilous situation, Harrison reacts in a curious way.

Previously working as a drone of sorts, he embraces the freedom to fly wherever and do whatever he wants. He puts himself at risk of death because for the first time in long while he is finally living. It’s sad and beautiful but also pretty funny in its own way.

The presentation complements the gameplay well. Despite being set in the deep darkness of outer space, there are plenty of purples and greens to keep things looking interesting. Some of the speed demon objects like gas planets and ramps have long visual lead-ins to let players know something important is coming a little before it shows up.

The soundtrack deserves special mention as one that works well with the rest of the game. It captures the science fiction feel with its drifting electronic melodies, but also has higher energy sections that set the stage for Lost Orbit‘s fast action. Composer Giancarlo Feltrin did a great job with it; my only complaints are that I would have liked more tracks and for them to be unique to the various star systems.

All in all, Lost Orbit is a winner. At about two to three hours to get through its campaign, it doesn’t overstay its welcome, but it can definitely last longer for those who want to go for all the platinum medals. It is only ever as easy or as hard as the player wants it to be, and it does that through smart design rather than by artificial difficulty tweaks. Boiled down to its essence it’s a game about dodging obstacles, which isn’t exactly an amazing concept. But it takes that concept and runs with it, doing its dodging thing well.