Can you imagine working your magic-weaving tail off, all year, reaching your last day of school, only to find that you are forced to relive it over and over again? No summer vacation? No trips to the beach? No mushroom gathering?!

This is the fate that befalls goofy-but-well-meaning witch Akko after her nosy nature gets the better of her. Now, forced to replay the final day of the semester on a perpetual loop, Akko, along with the shy Lotte and awesomely sombre Sucy, must team up with friends, enemies, and friendly enemies in order to get the clock moving again, lest – gasp! – summer vacation never comes!

Bandai Namco’s Little Witch Academia: Chamber of Time – an adaptation of the popular anime series – is an action-RPG which allows fans the chance to step into the shoes of the students of Luna Nova Magical Academy. Originally launched in Japan in November 2017, this long-awaited localisation gives Western fans the opportunity to save the day alongside Akko and co. 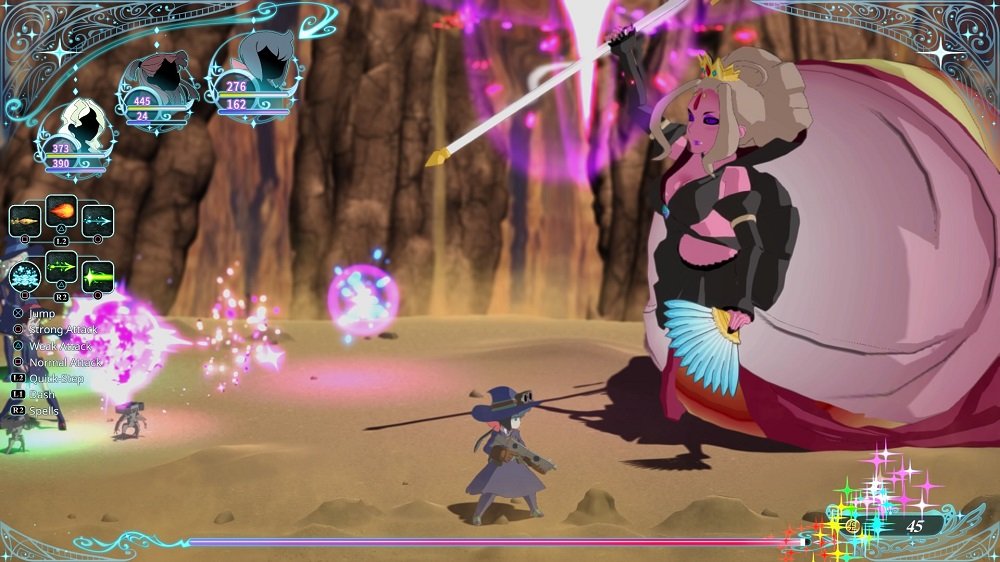 Little Witch Academia: Chamber of Time is an action-RPG that blends two distinct styles. The first sees the player, as Akko, traversing the corridors of her wizardy boarding school, getting into scrapes, finding hidden objects and solving problems. Typical side-quest stuff. The second element of Chamber of Time is a 2.5D dungeon crawling brawler, as the player takes a party of three characters into various magical labyrinths, gathering loot, fighting bosses and ultimately rectifying Akko’s chrono-conundrum.

The unfortunate reality, however, is that both of these games are awful.

The RPG elements aren’t dealt with lightly. You have a chunky roster of seven characters to choose from, each with their own skill-sets, attacks and effects. You punch XP points into their attributes, use cool Horoscope-based skill trees to progress their abilities, and even kit them out with armour, weapon and accessory upgrades. These can even be enchanted through the use of cauldron-bubbling magic, thanks to the various ingredients found within the dungeon and the school grounds which, in itself, also houses around 80 side-quests. So the issue certainly isn’t a lack of features.

The problem is simply that playing the game itself is a total chore. Chamber of Time is a laborious, snail-paced slog of an adventure. Players will spend hours upon hours endlessly traipsing back and forth through the identical halls of Luna Nova Academy – a needlessly labyrinthine hub – armed with a dreadful map and radar system that only serves to confuse. Akko runs around her place of learning on endless wild goose chases, most of which are no fun whatsoever, and all of which are designed purely to pad out the game’s length.

Everything you do takes far longer than necessary. Main quest-lines repeatedly come down to Akko being sent to speak with a chain of people, only for them to direct her toward someone else, usually located at the opposite end of the school. This is a game that will send you to three separate characters in order to tell you to go to the storeroom. Then, when you eventually get there, it’ll be locked. “I wonder who has the key? I should ask around.” That is Chamber of Time in a nutshell. Later quests will force you to purchase expensive items, or gather randomised drops to progress the story, further falsifying length at the cost of fun.

Nothing the game tasks you with is actually exciting, and it all involves an endless retreading over one singular location, a location that is repetitive in design, and frustrating to pathfind. Even when the player unlocks Quick Travel, it costs a form of in-game currency for each use, as does unlocking Save Points. C’mon, we left this stuff behind with Ink Ribbons in the ’90s.

Whenever Akko receives a new labyrinth key, she and two pals of her choosing then enter the game’s brawler section. (No XP for the characters you don’t take with you. ’90s!) The dungeons are populated with awesome, well-animated monsters. But the whole process is, again, exhausting to play. The AI partners are impossible; they will wander headlong into hazards, fail to heal when damaged, waste their major skills on minor enemies and, occasionally, will simply wander off to the edge of the screen, lock themselves in place, and endlessly attack thin air.

These sections also suffer horrible depth perception issues, which will cause your character to constantly whiff attacks, as you weren’t on a frame-perfect plane with your opponent. Boss fights, such as a terrible confrontation with an ice dragon, are an exercise in endurance, as you attempt to align the moon and stars to leave the enemy vulnerable, all while your witches-in-arms dawdle off disinterested. For its great enemy design and efforts to switch up the style of each dungeon, the brawler sections are excitement-free battles between you, the controls, your atrocious AI partners and unforgiving collision detection. 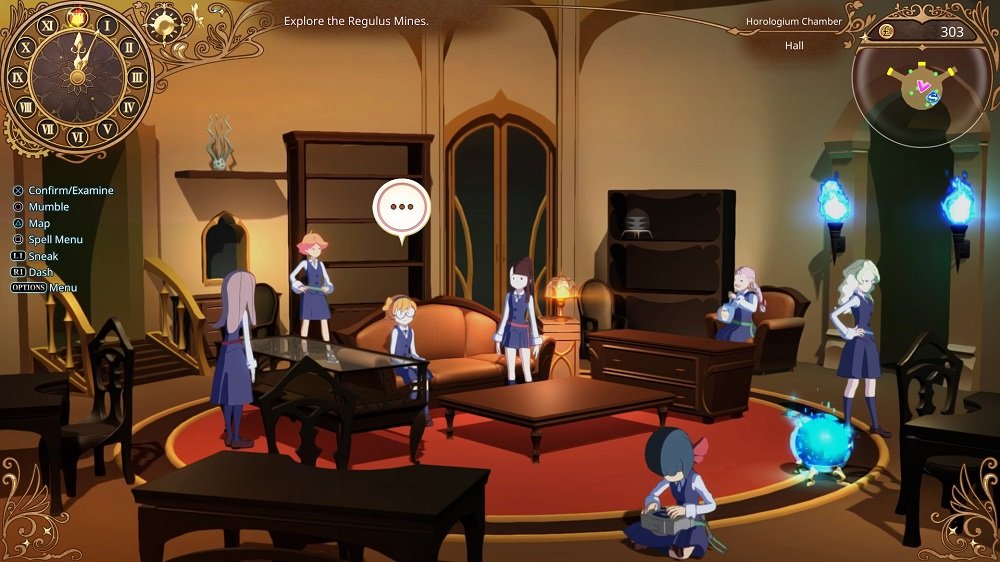 But here’s the worst part. The characters, story, script and voice-acting are fantastic. The game is witty and charming, featuring endlessly likeable characters, genuinely funny conversation and wonderful chemistry between its hard-luck cast of would-be witches. Everything about Chamber of Time that is directly related to adapting the anime is superbly handled. The characters models are full of life and nicely animated. The NPC dialogue is a hoot. Hell, there’s even a chunk of anime sequences created especially for the game! Even the story – though derivative – provides for many comedic setups.

I loved every one of Akko’s buddies (especially lil’ badass Constanze), they are all sharp, funny, and irrepressibly entertaining. That’s the real tragedy here. Clearly the team responsible for bringing the anime to life in video game form knocked it out of the park, but the technical elements of the adventure smother said achievement with monotonous gameplay. Chamber of Time is typified by dated video game design and the ironic realisation that, just like our young heroes, you are dragging yourself through the same motions over and over again.

Little Witch Academia: Chamber of Time is a disappointment. You can see the brilliance of its world, characters and heart shining through like a star. You can even see the skeleton of a genuinely deep RPG title. But the game fights your efforts to enjoy yourself at every opportunity, be it via bad design choices, repetitious gameplay or infuriating technical problems. Also, fifty bucks. The brand deserves better, if only we could turn back the clock so easily.

[This review is based on a European retail build of the game provided by the publisher.]