The Japanese-exclusive Guild01 is a “game jam” of sorts that bundles four games created by four notable designers in a single collection, and aside from Level-5’s co-operation in their development, they are wholly unrelated to one another. Most importantly, it’s not the kind of package you’d expect would receive localization.

Then Level-5 announced that Guild01 would be broken apart and brought out West as individual eShop releases. Only three of the games are making the jump — the fourth, Omasse’s Rental Weapon Shop, curiously didn’t make the cut. Nonetheless, I’m pleased that the company is willing to take a chance on these fascinating titles.

First up to the plate is Suda 51’s Liberation Maiden, a simple but manic 3D mech shooter with cutscenes provided by the animation studio Bones (Fullmetal Alchemist, Eureka Seven). Short yet sweet, it’s quite the exhilarating rush, even if it lacks the signature mind-bending weirdness that Suda games often revel in. 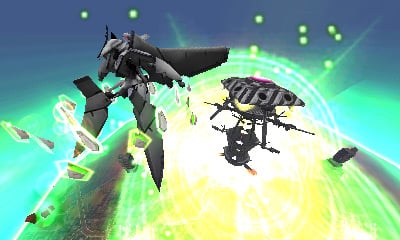 A century from now, a war-hungry nation known as the Dominion attempts to annex Japan in order to drain the land of its natural energy. The Japanese government decides that the best way to combat this threat is to adopt a Metal Wolf Chaos brand of foreign policy — give the President a giant mech. Thus, the government is restructured, the Prime Minister position is dissolved, and a President of New Japan is elected.

Unfortunately, President Yokuichiro Ozora is assassinated before he could fulfill his duties. In what was obviously the only sensible decision for the sake of national security, his high school daughter Shoko is elected Second President and charged with piloting the Liberator “Kamui,” an aerial battle craft that draws its power from nature.

Liberation Maiden plays a lot like a scaled-down Zone of the Enders — patrol the airspace above occupied cities and attempt missions that your navigator sporadically feeds you. Unlike ZoE‘s Jehuty, Kamui only has three types of actions. Using the circle pad, you can fly in any direction, and by holding down the L button, you can lock your view and strafe through the sky. To attack, drag the stylus across the touchscreen to lock onto any enemies in your cursor’s path.

This is the same “stick + stylus” control combo found in titles like Kid Icarus: Uprising and Dillon’s Rolling Western. The limited number of available actions means that you ought to be able to find your “sweet spot” much easier than in the aforementioned games, but I wouldn’t blame anyone for being initially turned off. But even if right-handed players can learn to mitigate hand strain, lefties are essentially hung to dry — there’s sadly no lefty option.

Cramping concerns aside, attacking couldn’t be any simpler. The main game screen is on top, so moving the cursor on the touchscreen won’t impede your vision. You can lock onto several enemies at once, or you can pass over the same enemy multiple times to bombard it with back-to-back volleys. Once you lift the stylus, your missiles will automatically fire. 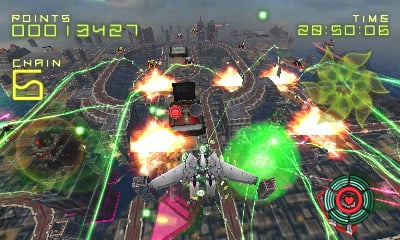 Surrounding Kamui are a large number of Deflector Nodes that have both offensive and defensive capabilities. These nodes act as an overshield that prevent direct damage to the hull; the more enemy fire the nodes absorb, to more brittle the shield becomes. You can replenish the shield by scoring chain attacks, which gradually restore power to out-of-commission nodes.

These same nodes double as your missile supply, which means that you are completely exposed while attacking or prepping for an attack. This also means that the more nodes you lose, the fewer enemies you can target in a single strike. It’s a very clever risk system — you can choose to stay well guarded by performing smaller attacks, or you can launch your full strength and rely on your maneuverability to keep yourself from harm.

In the second stage, you gain a second, more powerful weapon: a focused laser. Similarly to how the missiles function, the duration of continuous laser fire is directly proportional to the number of Deflector Nodes still active. The laser is even riskier because you can’t lock onto enemies and must instead manually maintain the cursor’s position. This shifts a good deal of mental focus away from movement, increasing the likelihood that you’ll take damage. 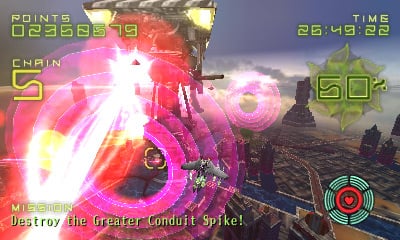 There are only five stages in total, and your goal in each is to destroy three Conduit Spikes embedded into the surface before attacking a much more well-guarded Greater Conduit Spike. While you can easily breeze through all the stages in as little as half an hour, you can choose to explore each level thoroughly in search of enemy installations. Destroying these installations — which include towers and bridges — will restore a small patch of nature to the immediate area. The higher the percentage of purification by the level’s end, the greater your score will be.

You can also unlock concept art and additional backstory by completing specific tasks, ranging from performing all possible attack maneuvers at least once to achieving 100% purification in a level. The main campaign is so short yet packed with so much action in that brief period that it never feels like a waste of time and effort to attempt “just one more” achievement. Every goal is within short reach, compelling you to keep playing well after the credits roll. I wouldn’t consider it a grand amount of replayability, but it’s enough to satisfy anyone who enjoys their action games in quick, digestible bursts. 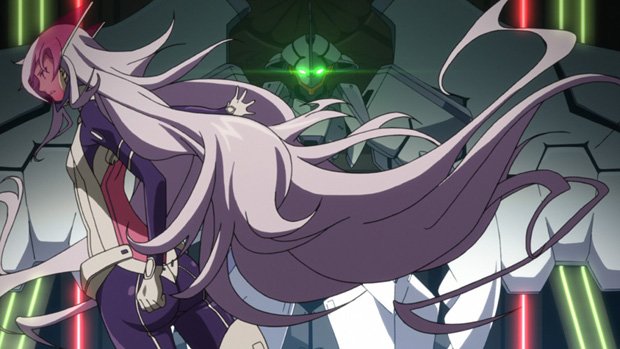 For a small game that was originally part of a larger entity, Liberation Maiden is very polished. In addition to the animated opening and ending cutscenes, there’s plenty of fully voiced dialog between Shoka and her First Secretary Kira, who also doubles as Shoka’s navigator. Though the constantly repeated sound bites — “Enemy missile closing in!” “We’ll fight for our people!” “What a rush!” — can be rather grating, it’s lovely to see such care in making you feel like you’re playing a sci-fi anime, right down to J-rock vocal songs that mark two major battles.

What drags down the experience ever slightly is the fact that the Dominion is completely faceless. You see and hear a lot of Shoka and Kira, but you don’t even get so much as idle radio chatter from the other side. It also doesn’t help that Dominion machinery is utilitarian to a fault — Conduit Spikes are literally giant, unadorned screws, for one. It’s not a deal-breaker, but I’m just surprised that Suda 51 and Grasshopper Manufacture, known for birthing outrageous and memorable characters, would settle for such a plain antagonist.

Liberation Maiden isn’t Suda 51’s crowning achievement or anything, but it is a simple, fun shooter with a clever offense-defensive mechanic and several coats of glossy finish. If you aren’t bothered by the stick and stylus control scheme, you’ll enjoy this hearty dose of anime mech action. Certainly, the remaining Guild01 games have a lot to live up to.