At first, I loved Lethal League. It has plenty of style, it has a fun central mechanic, and it filled my need for a chaotic yet accessible fighter to bust out at parties – now that I no longer have access to Smash Bros.

But as I made my way through the game’s Arcade mode while I waited for the PS4 version to launch, I started having less and less fun as I went up against computer-controlled opponents with a preternatural ability to tell exactly where the ball was going to land. Single-player Lethal League became a chore. “Wait a minute,” I said to myself as I lost to Mirror Candyman for the umpteenth time. “This sucks.”

I held on as we got closer to release, hoping that the online multiplayer would be better. It was, briefly. I won a decent amount of matches, all before the netcode decided to give up on me. Now I can only connect sporadically, and even the matches I’m able to find can end in a disconnection.

I do not much care for Lethal League anymore. I don’t hate it, I’m just disappointed. 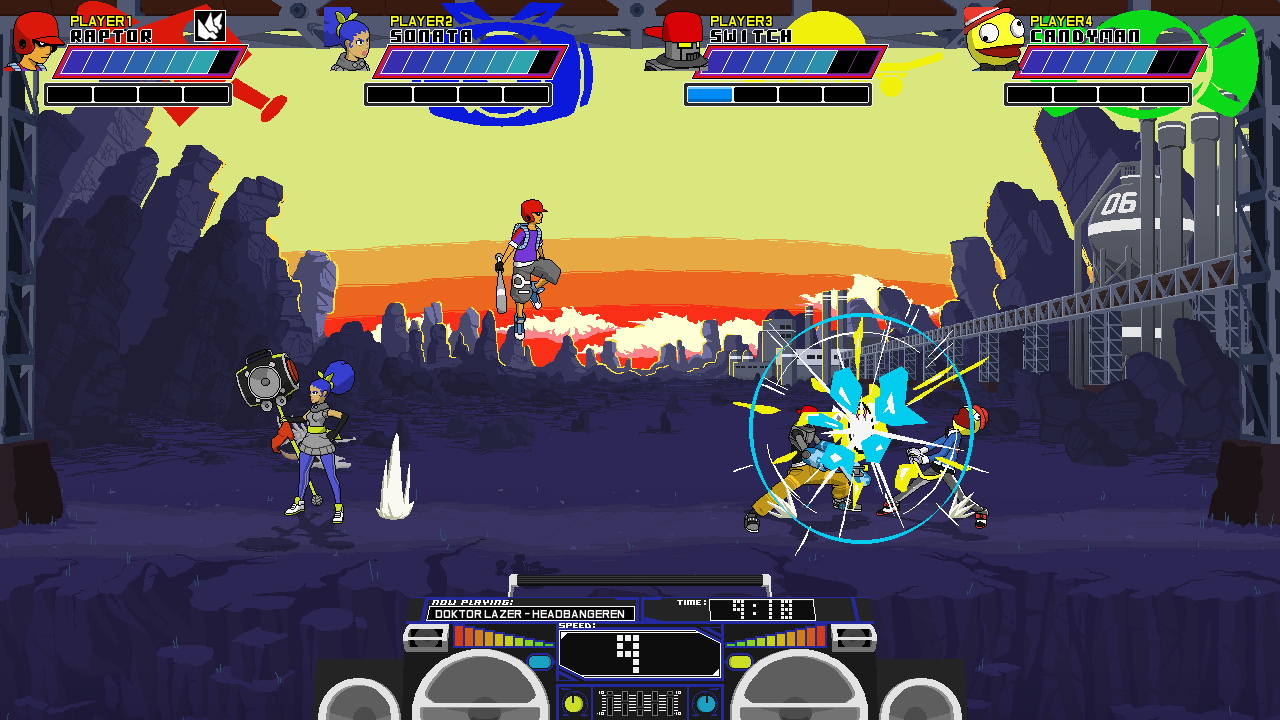 Lethal League is a fighting game in the very broadest sense – it reminds me more of Towerfall, in that both games have very difficult single-player modes and you need four controllers if you want to play it correctly. You’re put in an enclosed space with up to three other competitors, and you’re trying to spike a ball into your opponent’s body. If your opponent gets hit as a direct result of your actions, you win the round. There’s more to it than that, but you get the idea. It’s like racquetball, but you want to hit the other person with the ball. Also, the “challenge” mode is not fun at all, at least once you start getting into more advanced AI opponents.

After days of trying to figure out what about Lethal League‘s high-level play was so vexing, I came to a realization: the AI can predict where the ball is going and is fully aware of the intricacies of its animation. The late-game opponents countered shots with a regularity that human players in the game’s online multiplayer never managed to replicate. When I would try and set up shots I was positive would net me the win, my foe would do a pixel-perfect about-face and send the ball right back at my gourd. Great.

That’s part of what makes Lethal League so unpleasant to play when you’re going up against the CPU: the animation. There were many instances where I was absolutely positive I input the commands to whip around and hit the ball, yet the ball still hit my character and I lost the round. I never managed to properly account for the length of the animation, so I was often punished by the AI. That sort of difficulty might be fine in a game sold on that level of intensity, but Lethal League is advertised as a wild pick-up-and-play party game. It’s just curious to find something so unreasonably difficult in such an offbeat package. Sure, when your opponent is charging up a powerful shot, you can see their meter in the bottom of the screen so you know when to counter, but it’s rarely worth the risk to take your eyes away from the action.

On the occasions where I managed to counter my opponent’s shot and return the ball, the AI would often react with pixel-perfect timing and a much harder shot. Most of the time, it’s difficult to ascertain where a ball is going from your opponent’s animation alone, if you’re not willing to risk getting up close to a charging shot for a counter (And I wouldn’t recommend it, since there were times where my character was sucked into the orbit of the ball like some kind of black hole, messing with my timing and costing me the round). So, really, there was never a chance. As a regular human, I’m not good enough to be a Lethal League pro – but neither are my equally human opponents. 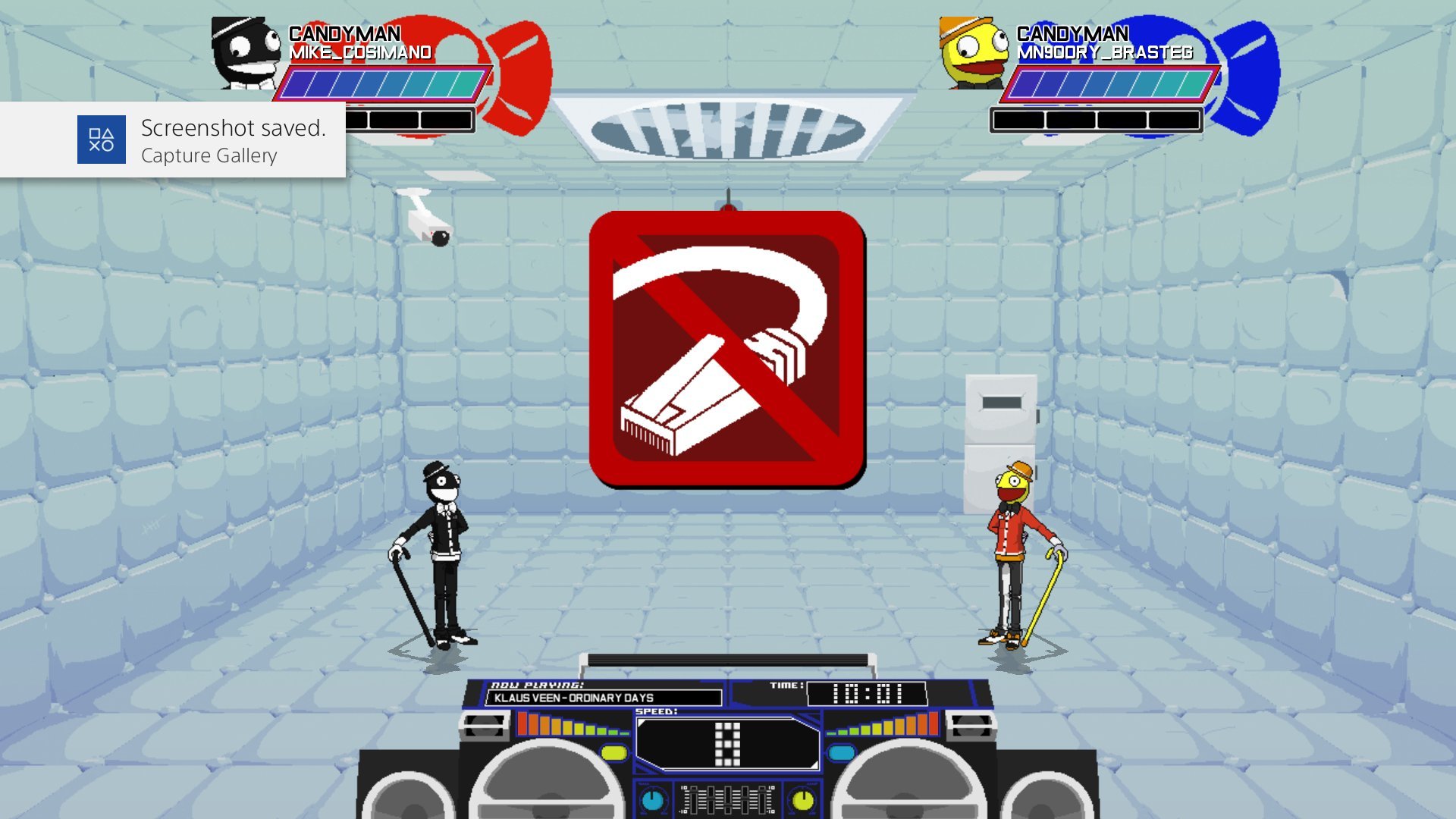 I had plenty of fun with Lethal League‘s online portion when it worked. As it turns out, the game’s engaging core shines when everyone’s on the same playing field. Countering a powerful shot feels like an event, because you’re not sure how you did that and you have no idea what your opponents are going to do next. If they’re not perfect robots, then that adds tension! But the online multiplayer doesn’t work all that well anymore, is the thing. And I’m sure I’d really enjoy playing this game with my friends, but it would be a while before I could wrangle enough people to give the couch competitive side a real shot. I live in Los Angeles, you see. People don’t like to drive more than a couple miles to visit friends.

I’m sure people who live in dorms or have a similar level of access to three like-minded people are screaming at their screen right now about how I’m being unfair to Lethal League because I can’t test every possible permutation (because they scrolled down to read the score and didn’t bother with the text), but I’m not in the habit of giving high scores because something might be good. The game’s probably just as fun in person as it is online, but I couldn’t tell you for sure. Plus, controllers aren’t cheap, so good luck if you don’t already have more than one.

The multiplayer works about 45% of the time. The “challenge” mode is more like a training simulation for Skynet. 2/3rds of this game are not up to par. I cannot get three other people together to play Lethal League on my couch. My experience with Lethal League is valid even though I didn’t contort my life to satisfy a hypothetical. Some other people might be in the same position, and I hope this review is useful to them.

Oh, real quick before we get to the score, let’s save everybody some time.

I’ve tried to explain Lethal League to a lot of people. I’ve found that the best way to describe it is “If Mario Tennis and Smash Bros. had a baby, and it was raised by European DJs who love baseball.”

Now if that doesn’t sound interesting to you I don’t know what would. 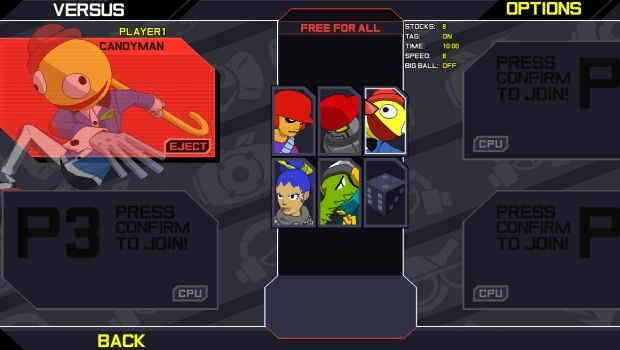 At this point, many people’s first exposure to Lethal League was in 2013 as a flash game. I first saw it as the final event of the UFGT9 (a popular fighting game tournament) Mystery Game Tournament. Since then, developer Team Reptile announced it would release a more fleshed-out version of the game on Steam in 2014 which has since been shown off at many exhibitions and tournaments, including EVO’s Indie Game Showcase.

The core of the game is simple — hit the baseball into your opponent. You face off in a small rectangular arena, and the ball will bounce around until it hits the player other than the player who last hit it. You cannot directly attack them, but rather your attack swings your bat (or, depending on the character, your cane, tail, hammer, or skateboard) so that you can hit the ball, regain control of it, and hope it hits the other person before they make contact with it again. You can also bunt the ball to slow it down temporarily. If you can do these things, you can have a lot of fun with Lethal League. The trick is, however, that this game is far more deep than it initially seems.

Hitting the ball regularly back and forth very slowly builds the speed of the ball, which starts around 10 miles per hour. The only way to really get the velocity going is by jumping in the air and hitting it with a down swing, doubling the speed. League is at its most fun when the ball is going in the tens, if not hundreds of thousands of miles per hour.

There are five different characters to choose from (the developer states they plan on releasing more for free), all with their own movements, angles when hitting the ball, and move properties. Characters vary from Raptor, the “Shotokan-like” character who is decent at everything, to characters like Candyman — an eccentric masked figure who relies on using trickery to defeat his opponents. Each character also has their own special attack, which you can unleash after hitting the ball a few times.

I could go on about all the little features like clashing, clash baiting, and meter control that make this game incredibly deep, but the best part is even at the most basic level it’s just a fun game to play. It’s an amazing love letter to fighting games, even with a Guilty Gear “Heaven or Hell Let’s Rock”-esque introduction to the rounds, but it doesn’t require the levels of memorization or mastery of input of an actual fighting game. It’s much more akin to a game like Towerfall or Samurai Gunn in that respect. While at EVO I played the game for a few hours with a crowd of people that grew and grew as the day went on. Everyone had to see why we were all getting so hype for this baseball game, but they quickly joined us in the fun.

Lethal League can be played multiple ways. Up to four people can play at once, so along with your 1v1s you can also play free-for-alls, or team-based games. It also features online play via GGPO, a popular online service designed specifically for fighting games, such as the recent re-release of Street Fighter 3rd Strike. The only online mode is currently a quick match sort of set up where you can invite friends to play. 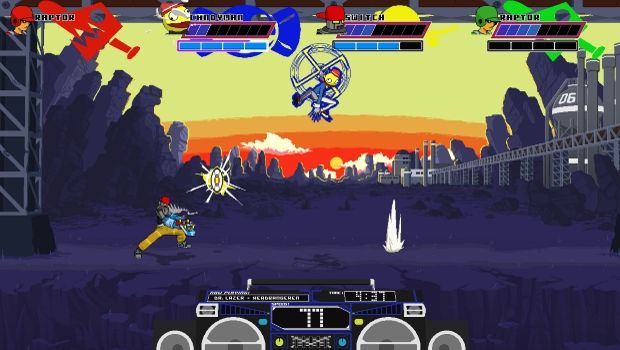 It would have been nice if there were more options, such as ranked matchmaking and an online leaderboard. The game plays smoothly, for the most part, but all of my testing was with other people in the same region. There is a single-player challenge mode, which is quite difficult and I’ve only managed to beat most of the way through. In fighting games, playing against the computer is often just “how many times is this bot programmed to let me hit it,” and the harder difficulty levels in this game suffer from that greatly.

One of the best features though is the music. Each of the six stages has its own “bangin” track, which vary widely. The HUD of the game is presented on a boombox which also displays the track title and artist of each of the songs, which are all not widely-known DJs. The music is supremely catchy, and even the menu theme will stick with you long after playing.

There is controller support, as well as mouse and keyboard. This game can be played on pretty much any USB device with controls, and performs very well on fightsticks. There is, however, a little bit of jankiness with the menus while using a controller, but none of that persists in the game.

Aside from lacking robust online options and a few clunky menus, Lethal League is an amazing package. It’s my personal favorite of the revival of couch co-op games, and may be my favorite “tell a friend” game of all time. I know I’ll be spreading the word, and maybe even one day we will be watching streams of high-level League play. Team Reptile really hit it out of the park with this one.