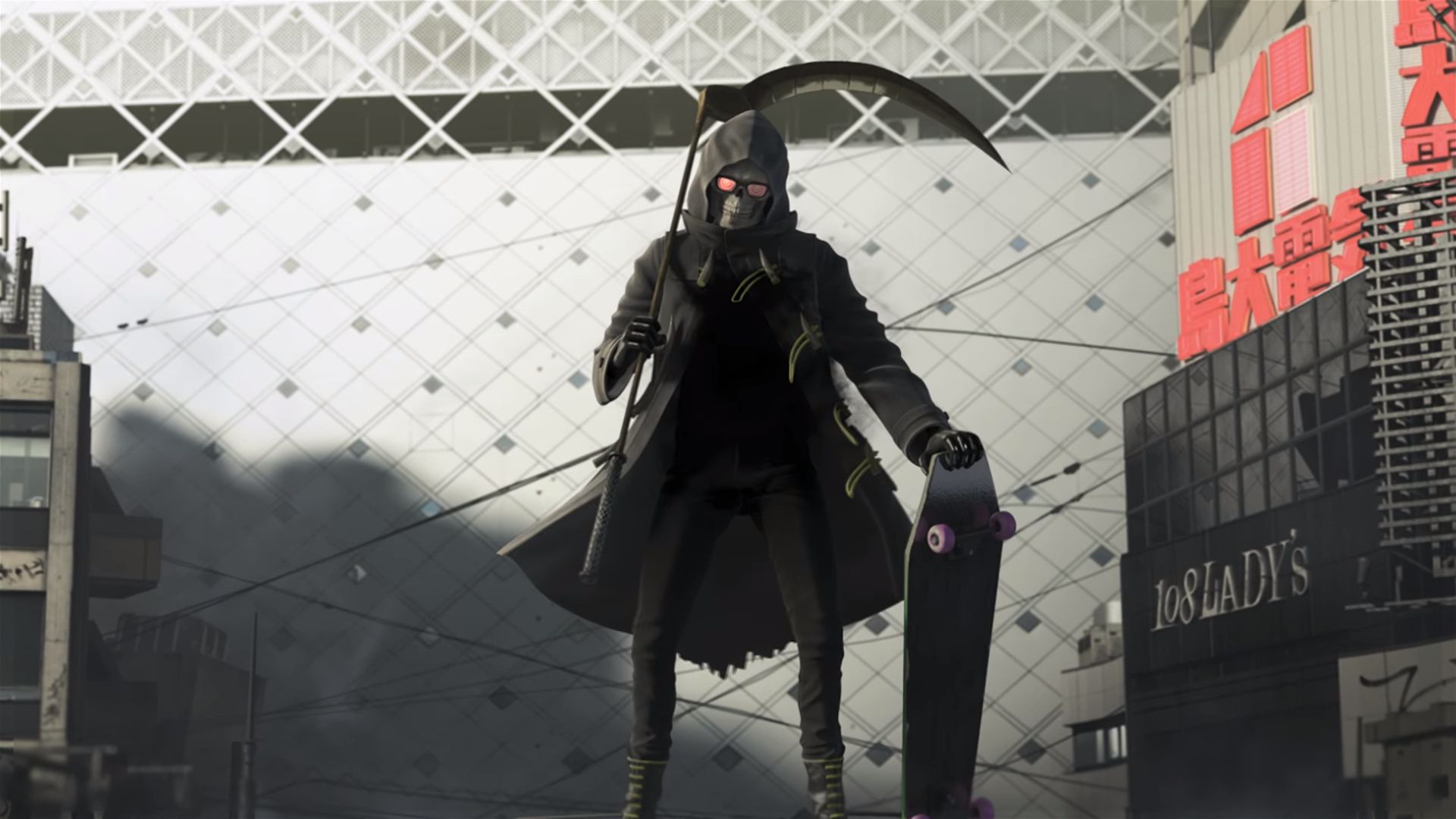 Ever since it dropped, I’ve been poring over every little detail of Let it Die. It’s a strange beast, with tutorial messages at every turn for the first few hours, many of them facilitating back into the microtransaction scheme.

It’s definitely a Grasshopper game, but a lack of polish and a fair, but cumbersome free-to-play crutch both hinder my excitement. 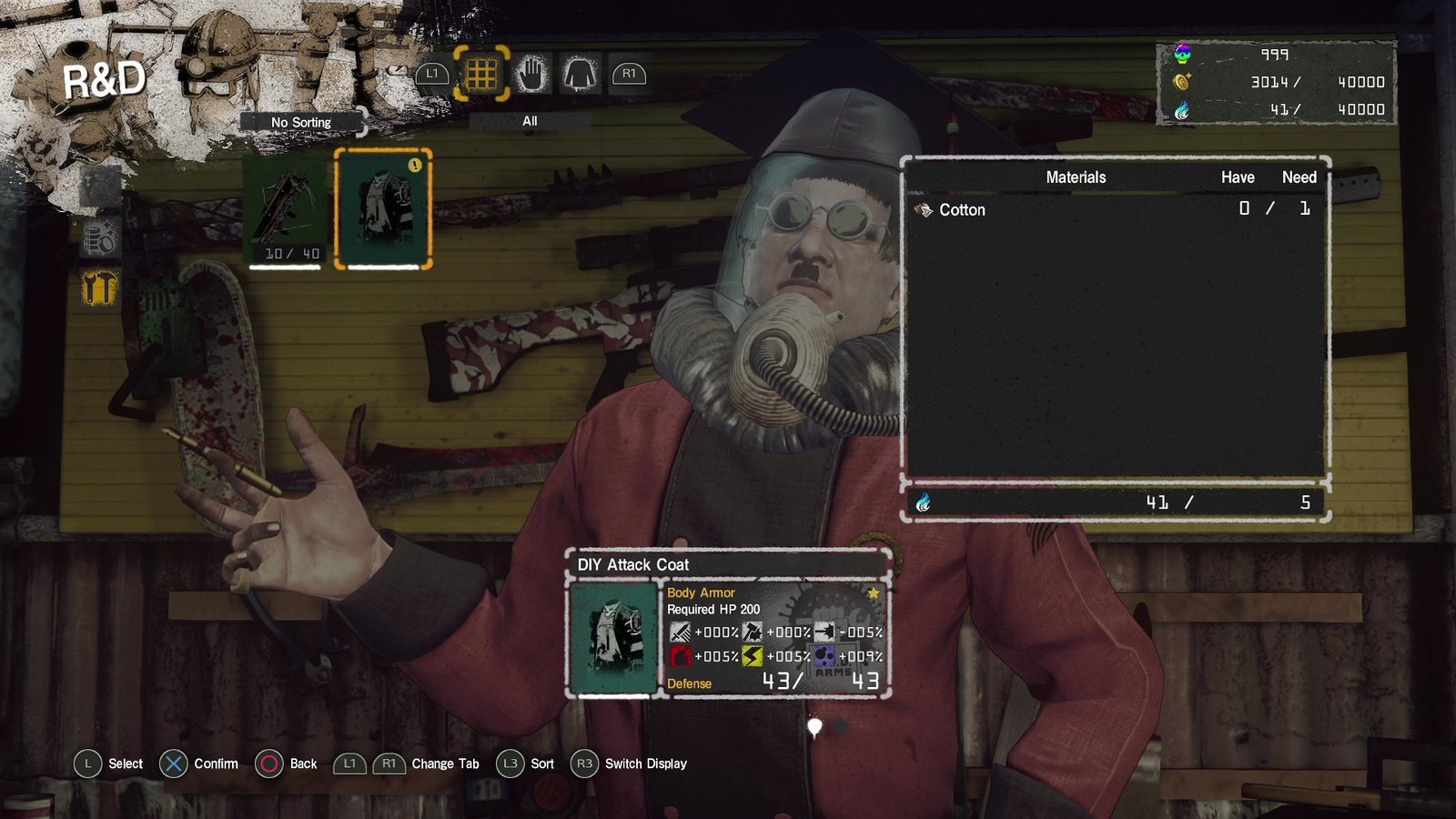 While the phrase “roguelike” is thrown around a lot, Let it Die operates more like a traditional action game with some minor free-to-play caveats. Similar to Rogue Legacy, you can bank coins and slowly enhance your hub shop over time to help you in each subsequent run. In fact, you can even “buy back” your characters after a death for a small gold fee, which retains all of their previous levels. Eventually you’ll have the funds to buy back and re-equip your fighters in seconds flat if you don’t opt to just use the premium currency to continue to come back to life inside of the dungeon itself.

The more I played, the deeper it got. Your character list is actually a “freezer,” which stores up to eight different classes. Each can be customized with distributed statistics like a typical action RPG, but you can also “master” weapon types as you fight enemies with specific items over and over. It’s Let it Die‘s small, grindy means of progression so you don’t feel completely defeated after failing to scale another floor of the tower.

If keeping your dudes (or dudettes) in a freezer wasn’t creepy enough, it gets much weirder. You can sneak up on “beasts” to snatch them or eat them on the spot, most of which are terrifying giant frogs. This is in addition to finding mushrooms on the floor with random qualities, comic books about serial killers, and the small fireside chats you’ll have with the main cast in the “arcade” hangout. Grasshopper clearly spent a long time creating this world, and it shows.  Most of the charm is in the hub, which I adore hanging out in.

Yet, the actual dungeon-crawling aspect is riddled with problems. Layouts are too similar and too linear. There is a random element to the designs, but a large amount of structures and key areas are repeated for any given floor, on top of an overuse of plain-looking tunnels and corridors. They’re like low-rate Chalice Dungeons from Bloodborne, and that game had a full campaign.

Combat is also shoddy, and requiring players to use the PS4 Touchpad for items is just plain bad. Many times I’ve eaten explosive mushrooms, or “wheeled past” an item I wanted to use because of the “flick” movement. It’s funny at first, but not when you’re doing really well on the 10th floor and meant to throw an explosive as a grenade and find yourself eating it instead. Inventory management as a whole is a mess, with everything jumbled into one list, your “Death Bag.”

Weapon swapping could also be a whole lot better. It attempts to emulate the Souls style with left and right slots (three for each, tied to L2 and R2), but since it doesn’t gel correctly with certain item types, it just ends up feeling sluggish. This is mostly an annoyance when a weapon breaks (which can happen within seconds of picking one up), and the system swaps to something else — if you’re still pressing the attack button, it’ll immediately queue up the new item. One time it switched to my revolver, an item I had been saving for minibosses, and that swap fired several shots at point blank range even though I had another melee item equipped next to the one that broke.

The AI can also feel really cheap when you’re swarmed, as stunlocking is a common occurrence, and the game isn’t fast or smooth enough to allow players to dodge out of it. While the onus is on the player to not get into these sort of situations, it feels like some “Haters” (NPC versions of player characters post-death) can appear from anywhere and initiate a stunlock.

Oh, and folks who aren’t used to weird Japanese action games probably need not apply. There’s a lot of unwelcoming mechanics, as the game doesn’t even tell you how to reload a ranged weapon until really late (it’s L2 or R2 + X by the way). That sort of withholding is fine by me — I enjoy experimenting — but it can also get really grindy. After five hours or so you’re getting to the point where you’ve acquired blueprints for basic low-rent shirts and pants, so you can buy and equip the worst of the worst equipment after your stuff breaks or you come back to life. Heck, a large portion of the game isn’t unlocked until you beat the first boss, and Let it Die caps your level-ups at certain intervals until you’ve climbed to a specific point in the tower.

So how about those microtransactions? They’re not predatory, actually, but they’re jarring to see at nearly every turn. While Let it Die does give you roughly $5 at the start in premium currency (Death Metals) to work with, and consecutive logins earn you roughly 12 Metals per week (that’s 12 revives, or 12 items to cash in for extra gold), I can’t help but feel like my progress was impeded for the sake of them. 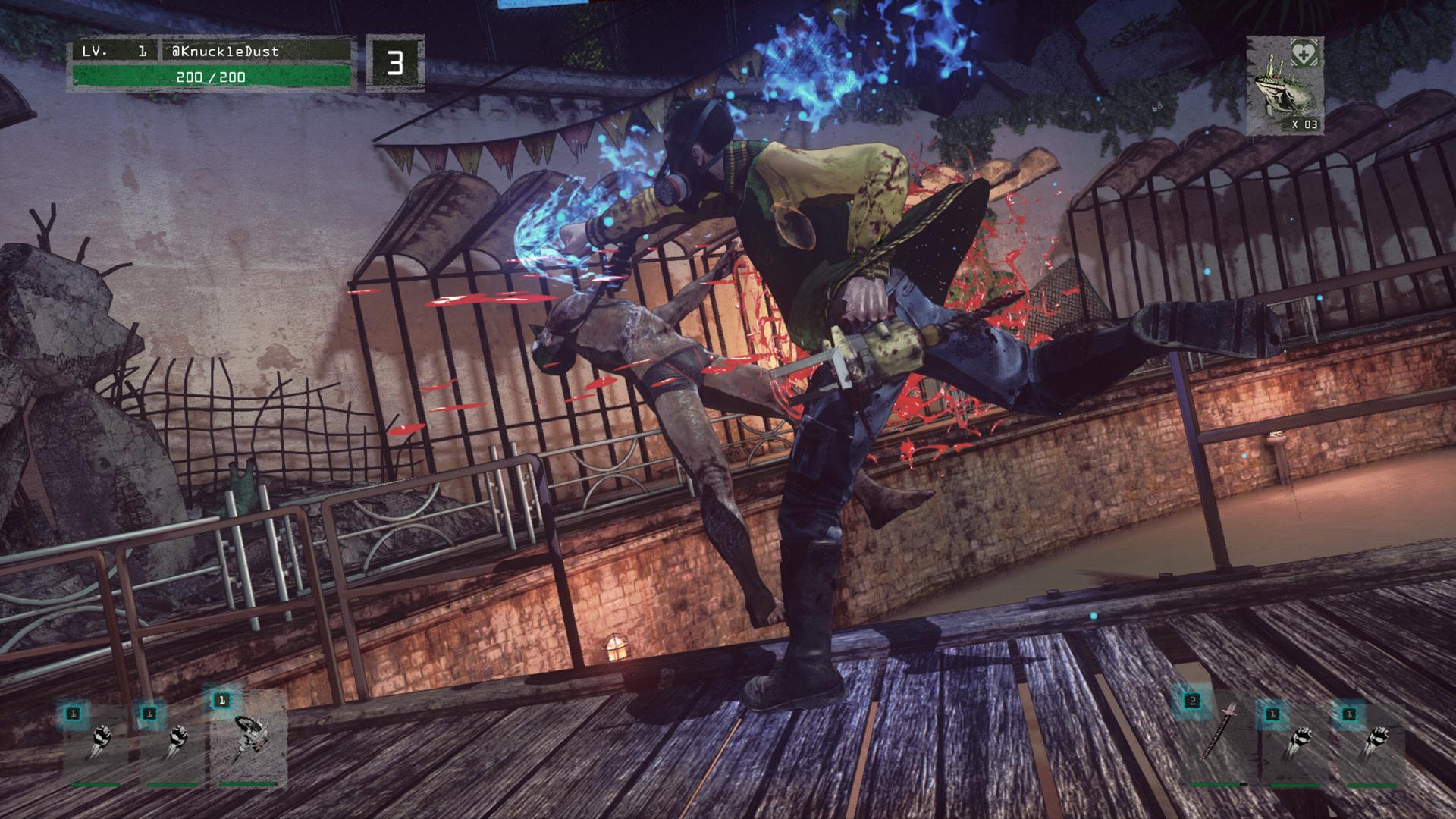 The base defense concept is partially where it loses me. That mode I was talking about that’s unlocked after the first boss? It’s called the Tokyo Death Metro (TDM), and it works a lot like Metal Gear Solid V‘s Mother Base system. Basically you pay a gold fee to raid another base, destroy their fighters, and earn cash from their bank. You can even pick up and hold other characters “hostage” in your bathroom (haha, this game) for extra currency.

It tries to add this extra asynchronous element, but it’s just not very fun. The waiting room in TDM is neutered with less personality, and the NPCs, no matter how decked out or leveled they are, use the same poor tactics, making most bases easy to raid. I kind of just do a few token runs each day to get my captives (so far I can store two in my base after upgrading my bathroom), upgrade my base if I can (mostly for campaign use like adding extra character slots, not for TDM), and call it.

It’s also odd to see a Grasshopper action game require an online connection, and instantly kill your character if you quit or disconnect in a dungeon. There’s even been “apology Metals” given out already because of maintenance issues. So while it’s a fair system for the most part in the sense that it is a single-player game at heart and you can’t buy that much of an advantage, I really wish there was a buyout option for $60, because I’d pay it. At the very least, there’s no cursed energy system to limit your play, or ads. Though, researching items does have a short timer attached to it (that you can skip by paying Death Metals, of course).

I can really get lost in the world of Let it Die, and I think I’ll be playing it off and on for the next several weeks at the very least. It begs you to come back, and given the platform in which it’s been distributed, it’s something that can easily evolve into a better game in the future.

[This review is based on a retail build of the game downloaded for free off the PSN.]