LEGO City Undercover for the Wii U, despite a heap of technical issues, brought a ton of charm to the platform. The fully voice acted experience was not without its camp and cheese factor, but ultimately it provided a fun open world experience for fans who were longing for a new Wii U game to play.

Enter the portable version, titled The Chase Begins for the Nintendo 3DS. It tells the story of super-cop Chase McCain before he was, in fact, a super-cop. As a companion to the Wii U version, it had the opportunity to augment the console package, and possibly push the brand into new territory.

Instead, it’s a step down in nearly every way. 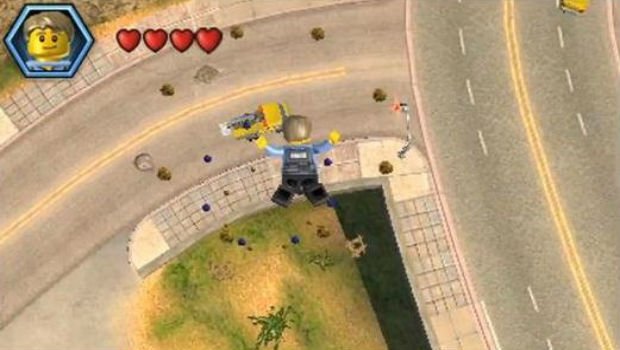 Set two years ahead of the Wii U experience, hero Chase McCain is still just a rookie cop, and is just getting started on the force. You’ll also notice a few other familiar faces, like Officer (not yet Chief) Dunby, and of course, Chase’s arch-nemesis, Rex Fury. In this sense, it serves as a companion piece to the core game, and not simply a portable remake.

The Chase Begins suffers from much slower initial pacing compared to its older Wii U brother, as the tutorial is roughly 30-60 minutes in length, and has Chase performing mundane tasks like rescuing animals or delivering donuts to demonstrate the game’s controls.

But it really doesn’t need any sort of tutorial as gameplay is as simple as they come, considering all Chase can really do is run, jump, punch, and occasionally interact with the environment with his various costumes. Getting around is really easy too, as the 3DS substitutes the Wii U’s GamePad map for the bottom screen, so the map is always readily available for easy objective identification. 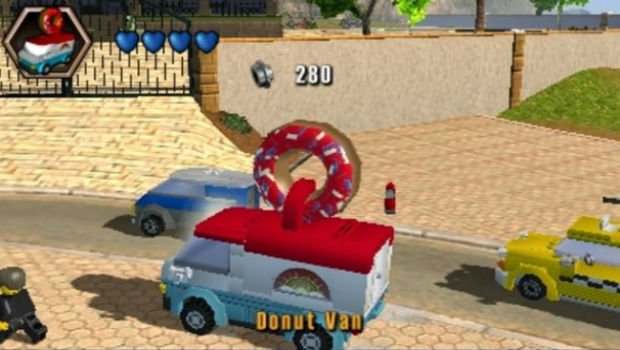 At first glance, everything seems normal. Missions now take place primarily in the city, and are less jarring of a transition than the Wii U version’s structure, which constantly segments the narrative within tiny playgrounds. Objectives themselves are extremely simple, and most of them provide a simple platforming frame to get from point A to B. Essentially, they’re inoffensive at worst.

But once you start getting into the thick of things, you’ll start noticing the major compromises that were made to essentially push this round prequel peg through the square portable hole. The most notable sacrifice is the lack of full voice acting during the vast majority of the game.

That’s right — outside of the occasional cutscene, there’s no voice acting whatsoever — instead, the dialog is presented in text form, which degrades the comical tone of the Wii U version in a major way. To add to the disappointment, the script is a lot less witty this time around, and looks extremely cheap when juxtaposed to the higher budget Wii U writing quality.

During my playtime, I also noticed multiple disappearing NPCs and other graphical hiccups, alongside of a major disappointment: horrendous draw distance. To be blunt, your view of the otherwise beautiful LEGO City is pretty horrible, and full of grey clouds that block out pretty much anything that’s not a few feet in front of you. The 3D effect is fairly subtle, but The Chase Begins‘ colors are vibrant, despite the technical limitations within. 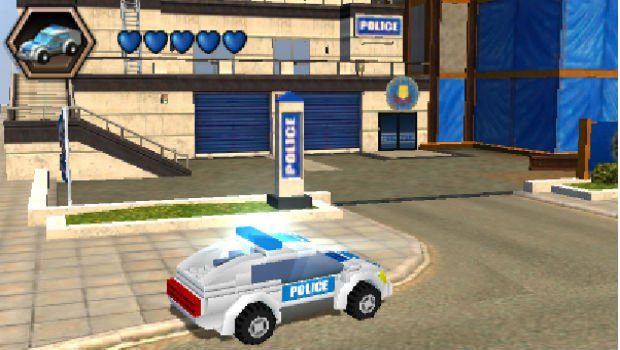 The long load times from the Wii U version are also back, but with a vengeance! I’m talking load times that will trump even the earliest of PSOne Classics, sometimes dipping into the two minute mark. In addition to serving as an overall nuisance, it also makes going into buildings and loading new areas a chore — and when load times impede exploration, you know it’s really bad. Considering how other 3DS developers have done more visually with their titles, it’s a bit odd to see a game like LEGO City suffer on the 3DS, especially given the aforementioned aesthetic sacrifices.

If you’re a diehard LEGO fan, odds are you’ll get some form of enjoyment out of The Chase Begins. For everyone else, you’re better off skipping it entirely, or picking up the superior Wii U version of the game. It’s one thing to pare down an experience on a portable: it’s another to sacrifice its integrity in the process.