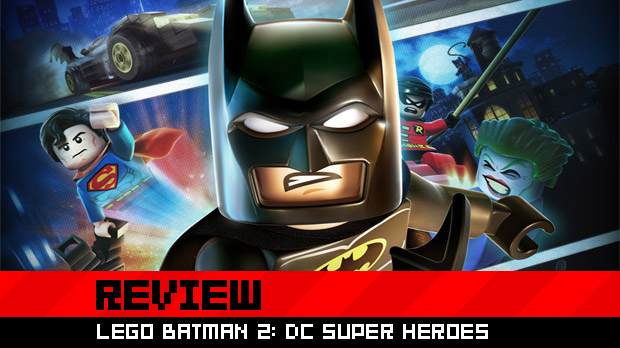 LEGO games. Love ’em or hate ’em, they’re not going anywhere. There’s always some pop culture property out there that looks so ridiculous yet so FUN when done up in LEGO blocks. For the most part, the core gameplay has stayed the same for many of these titles; there has been little innovation or change of the tried-and-true formula.

Until now. Mind you, this is both a good thing and a bad thing. 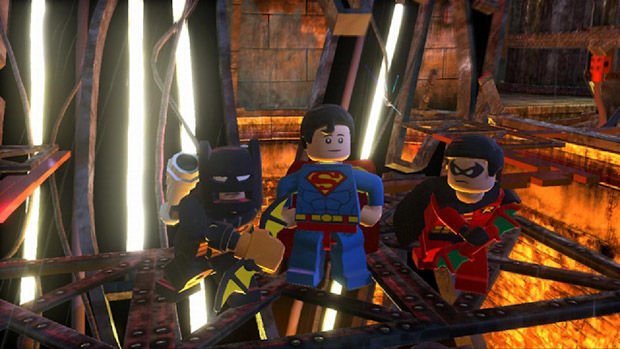 We all know what the LEGO games are about by now: building things out of blocks, collecting coin-like pieces, and obtaining kits, gold blocks, and red blocks for unlockables in a pop culture-inspired world. Once again, we visit the realm of Batman with an original story unique to the LEGO franchise in that it’s not based off the film exploits; a trait the original LEGO Batman game held as well.

This time out, however, the series’ trademark “humor” isn’t expressed with grunts and grins, but with actual voice acting. While this may impress some, I actually preferred the silent characters of the previous games. It does add a little more to the story and jokes, but overall, it’s not something that was necessary for the series.

Regardless, it’s there now. And as such, we’re treated to a variety of cut scenes where characters pop up to explain what’s going on. In a nutshell: Lex Luthor and the Joker team up to take out both the Dark Knight as well as Superman and reduce the LEGO version of both Gotham City and Metropolis to bricks. It takes the (eventual) combined efforts of not just Batman and Robin, but then Superman — and finally the rest of the DC heroes — to take down the baddies. Everyone got that?

From the start, it’s your standard LEGO fare: beat up enemies and build stuff. You’ll play through almost the entire first half of the story as Batman and Robin, with only occasional interjections from the Last Son of Krypton. There is a series of special suits the dynamic duo can use, each intended to help them bypass certain puzzles and traps in each stage. Blue LEGO bits are magnetic and can be manipulated by Robin’s Magnet Suit; similarly, if it’s covered in electricity, only Batman can traverse it in his aptly named Electricity Suit. Some suits serve a dual purpose such as Robin’s Acrobatic outfit, which not only allows him to swing from poles but also jump into a bubble to manipulate stress panels (such as those seen in the LEGO Pirates of the Caribbean game last year). 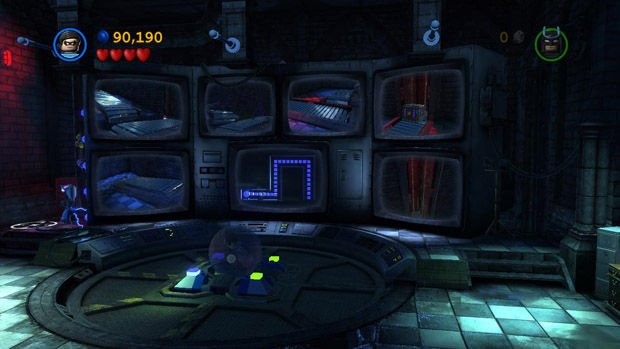 As you progress through the first few levels, the rest of Gotham opens up as your hub world, and the true scale of the game is finally realized. This is a huge title, with gold bricks and unlockable characters strewn all around the city. As you unlock Batman’s Batcomputer link ups, you’ll reveal enemy LEGO figures nearby, which once defeated will then be available for purchase with LEGO studs and added to your roster for Free Play. The Batcomputer also serves as a drop for a variety of vehicles, which are totally necessary, as traversing the city on foot would just take too damn long.

Sadly, the open-world hub between missions proves to be an annoyance more than the cool mode the developers had intended. The compass in the top left corner of the screen is practically useless, and the map screen is so sparse that being able to decipher which way you’re heading or even facing is an exercise in madness. This is only made worse when continuing a game after saving.

While in a mission, there are a few nodes that appear at the beginning of sections where you can choose to save and continue, save and exit, or just ignore. If you choose save and exit, you’re dumped back onto the street where you began the mission, or as far back as to the Batcave. The problem here is, however, that when starting the game up again, you begin your load in the Batcave. If you go to the Batcomputer map, it only shows the missions you’ve already completed, not the one your progress is currently saved in. To resume that game, you must drive through the city to the Bat symbol located on the map, then enter the location as you did when you originally began the mission. You may be fooled into thinking you may have to start the entire mission over, as the loading news report that begins each mission plays again, but thankfully, it should start you where you saved. 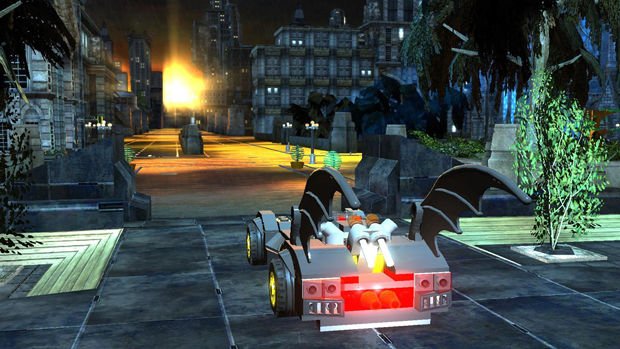 On that note, the whole save system is a joke. They still use checkpoints which save your progress, so using the save points is just a false sense of “it’ll be fine to stop here.” Plus, if you’ve collected any minikits while traipsing through the level and then use the save feature, when you reload your game, it’s as if you never collected it to begin with. This ensures yet another collection run through during Free Play (if you’re into that kind of thing).

Once you get into enough deep guano in the story, Superman shows up to lend a hand, and the flying aspect of his character is one of the most satisfying elements in the missions. What’s more, he’s invincible, only stopped by Kryptonite or blocked by hazards that one of the duo needs to bypass with a special suit. Blasting baddies with laser vision or freezing them with super-breath is tons of fun, and a silly highlight of the missions.

For some inexplicable reason, while Superman’s flight controls are perfectly easy to maneuver in the missions, when entering the city hub, it’s a huge pain in the ass to control him. They add a targeting reticule so he can laser blast stuff to free gold bricks, but the landing and flight controls are suddenly switched from the easy button mapping used in the missions. Why they chose to change the liftoff to a boost I’ll never understand. 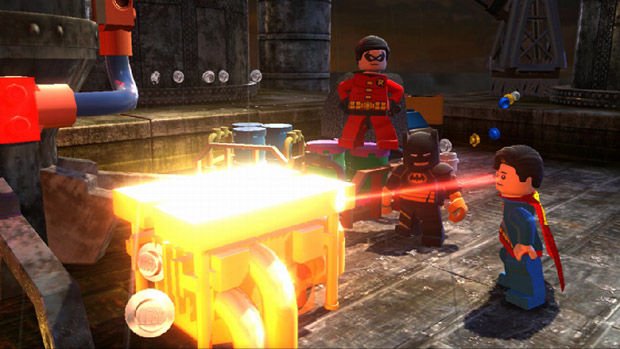 If there’s one other quibble I would have with the game, it’s that the control for certain things was a bit glitched. There’s one story mission of DC Super Heroes where you must destroy silver LEGO blocks and build something from the remains to advance. Silver blocks can only be destroyed by an explosion, such as from the rockets of Batman’s Power Suit, but there isn’t a power suit in that level.

There are some jetpacks, however, but after jumping in and out of them, I couldn’t figure out how to fire the rockets clearly mounted on the back. Sometimes I would press the B button, and it would fire, while others, it would make my jetpack boost me in reverse. I must’ve wailed on my controller for half an hour trying to get it to recognize the action I wanted it to perform. Granted, this seemed to be an isolated incident, but one that stood out as frustrating enough to explicitly note.

By the game’s end, you’ll have unlocked more heroes like the Flash and Green Lantern, all of whom are necessary for getting 100% of the bricks and studs in the game, which can unlock more vehicles, characters, and minikits. And while the voice acting isn’t great — the Joker’s voice, in particular, gets on my nerves — there are some humorous bits in the dialogue, such as Bats’ constant slighting of Robin, Robin’s hero worship of Superman, and a few sly digs at the title’s “big brother,” Arkham City.

If you’re a fan of the LEGO titles, there’s a lot to enjoy in LEGO Batman 2: DC Super Heroes, and the new bits Traveller’s Tales added — when they work — work wonderfully. When they don’t, though, be prepared to buy a new controller as you hurl the one in your hands through the wall.