I was feeling pretty cocky when I entered the home of a classy vampire and her kitten chum. I had a magical sword, a hat that gave me Flash-like super speed, and more health-giving apples than you could possibly eat in a lifetime. But no amount of stabbing put the vampire back in the ground, because vampires don’t give a crap about swords.

As I grumpily turned around and planned to head out the door in defeat, the blood-sucking fiend exploded into an army of bats — as they are wont to do. These tiny flying pests battered the hell out of me, and I was forced to consume many an apple in my righteous battle against them. With every last one sliced into little pieces, there was a glorious explosion, and I was showered in experience and gold. Success!

Feeling even more cocky than when I first entered the room, I decided to kill the kitten too. Now, before you string me up for slaying a cute wee animal, remember that it was living with a vampire. It had clearly chosen a life of complete evil. I struck it once, and then I was dead ten seconds later, forced to start my adventure all over again.

This is Legend of Dungeon, a game where kittens are more dangerous than vampires and where drinking random potions might make you inexplicably vomit rainbows. There are 26 floors of this madness, and they must be climbed down and then up again if you want to claim the treasure found in the dungeon’s depths. Oh yeah, and it was made by two people living in a tree house. 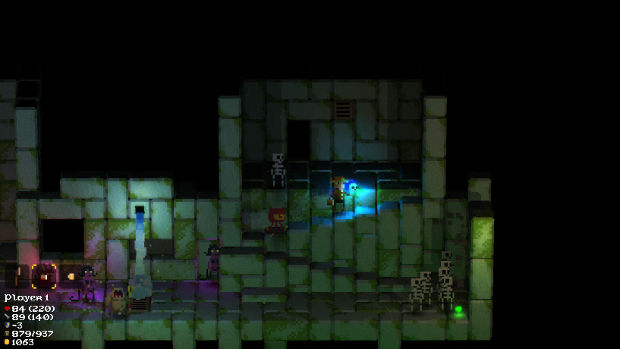 Robot Loves Kitty is keenly aware of the things we’re into right now: pixel art, permadeath, and hats. With that in mind, Legend of Dungeon caters to lovers of all three of those things. It’s a roguelike-like, a term that isn’t so much a solution to the problem that the roguelike genre is ill-defined and the source of many internet arguments as it is a safety net, allowing people to make games that are ostensibly roguelike in nature without needing to worry about upsetting folk who are easily distressed by genre definitions.

So, really, Legend of Dungeon is a roguelike, but with the combat of a brawler. Heroes must traverse 26 floors of a randomly generated dungeon, fending off all manner of deadly beasties, getting more powerful and — hopefully — more skilled as they go deeper into what may well end up being their tomb, and most likely the conclusion of the adventure will be the death of the hero.

The randomness of dungeons ensures that dying doesn’t mean you’ll have to go through exactly the same experience again and again, but certain obstacles and monsters do tend to be more common at certain depths. The permadeath system’s real flaw is that even quitting the game essentially kills your character.

If you’re in the middle of a dungeon delve and you get a call from a mate explaining that he’s been kidnapped by the Mafia and needs you to come to the docks to rescue him, you’re going to either need to just pause the game or say goodbye to all of your progress. Robot Loves Kitty is working on a save feature, but it boggles the mind that it didn’t ship with something so clearly needed. 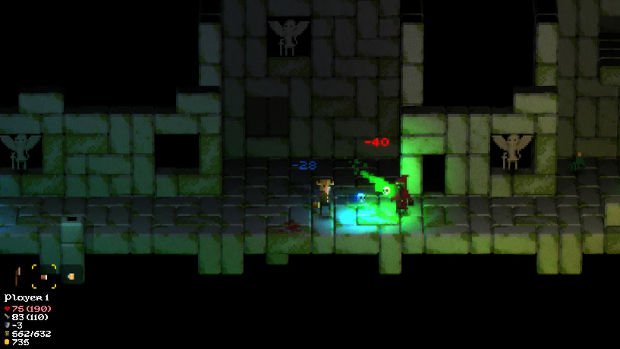 The whole romp is presented side on in 2.5D with gorgeous pixel art. This isn’t retro for the sake of being retro, however — in fact, I’d argue that it isn’t really retro at all. It’s a style, not a throwback. The character and monster designs are detailed and lively, and the gloomy, stone-clad dungeon is juxtaposed to the vibrant lighting. Rainbows are puked up onto granite slabs, spell effects light up pitch-black tombs, and doorways eerily glow to denote rooms you’ve already explored.

Accompanying you on your journey through these deadly catacombs is an excellent soundtrack that runs the gamut from ominous and foreboding to electric and groovy. The music is also randomized and dynamic, shifting and changing as you travel down into the forgotten depths of the dungeon. It’s usually pretty seamless, though on a few occasions I noticed that it would stop and change abruptly.

Scattered throughout the dungeon is a mountain of equipment and potions — from objects that encase foes in vines to the aforementioned rainbow-vomit-inducing elixir. For the most part, however, you’ll be finding hats. Or at least stuff that you’ll be putting on your head. Some of them give you Cyclops laser vision, others are just cats. Yes, more cats.

Finding a new bonnet is wonderful, because chances are it will change how you play quite dramatically, giving you insane boosts in speed or completely new abilities — all very welcome when the basic attack amounts to slapping things with a sword over and over again with variety only coming in the form of the ability to hold down the attack button for a supercharged cleave. 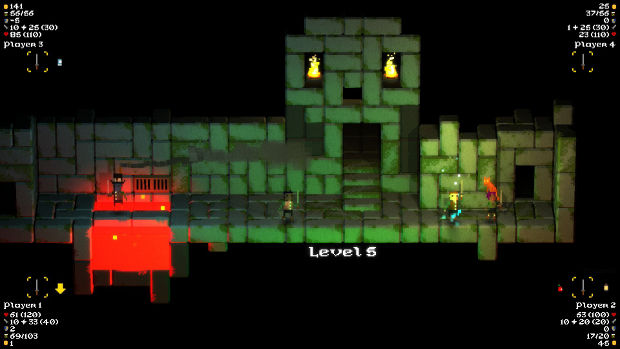 Unfortunately, it’s often hard to figure out what a new item does. A tiny box of stats sits at the bottom left corner of the screen, almost looking like an afterthought, and at first (and second, third, and fourth) glance, it’s just a bunch of numbers and brackets. It’s jumbled and cluttered, making it a bit challenging to decipher what items to keep or ditch.

Confounding things even further is an inventory system that needs to be doused in petrol and set on fire, then the ashes need to be thrown into the ocean. I’m getting frustrated even thinking about it. It’s the sort of system that maybe works if you’re juggling three or four items, but in Legend of Dungeon you have more items than that before you even leave the tavern at the top of the dungeon.

Shuffling through one’s inventory amounts to selecting the next or previous items in a single row. It’s annoying enough when nothing’s happening, but attempt to switch to a new item in the middle of a fight and you’re pretty much inviting death. About to die mid-battle? Enjoy scrolling through the inventory, looking for an apple, consuming it, and then scrolling all the way back to your sword so you can fight again. Oh wait, sorry, you’ve died before you can do any of that.

Even more infuriating than the fiddly nature of it all is that it encourages players to discard most of their inventory so they don’t need to fight to absurd system every time they want to quaff a potion or choose a hat. Many of the items are tailored to different approaches rather than being simply “better” — I found myself keeping a lot of different hats and a few weapons so I could alter my tactics when facing new, challenging foes. I was punished for this. Punished for exploring the game’s variety and not simply doing the same thing in every battle.

If limiting gear was the goal of this horrible system, then surely limited inventory space would be more appropriate rather than a feature that makes the mundane act of switching items a horrible, and often fatal, chore. 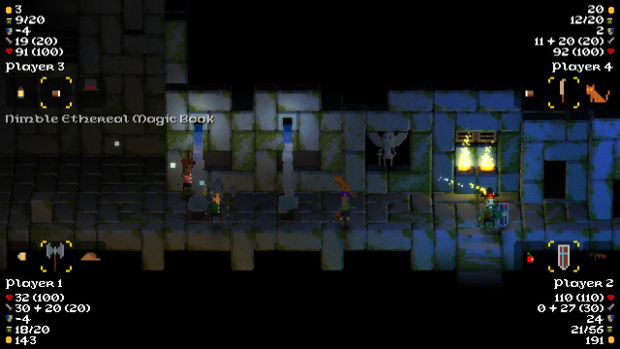 It’s a shame that it was such a pain, because it gets in the way of the delight that is slaughtering countless monsters. The freakish denizens of the dungeon all have their own little tricks, from flinging simple magical projectiles to paralyzing you with a mere touch. Encountering a new foe is both exciting and terrifying, as there’s no way to tell how powerful they are until you engage them in a scrap. Hence my aforementioned death at the paws of a kitten.

Choosing your battles wisely is paramount, and involves a lot of risk assessment. Will you take a chance and slap a minotaur around even though you have no more apples? Are you going to risk going toe-to-toe with three vampires, knowing the substantial amount of gold they tend to carry? Fights and bosses can be avoided, to take on later when you have leveled up and have a nice bit of health or some crazy gear, but you might need the rewards they spill upon death before that point. Perhaps bringing some friends along will make such choices easier to make? Then again, that might be more bother than it’s worth.

Legend of Dungeon is billed as a co-op dungeon romp, but it’s hard to take that seriously when it’s limited to couch co-op only. An online co-op mode was planned, but the Kickstarter failed to reach that stretch goal, leaving us with a more troublesome alternative. Everyone has a different PC setup, of course, so it might work better for some, but in my case an offline mode simply isn’t worth the hassle of changing my room. My PC is in my bedroom/office, where I only have one chair, and certainly not enough space for four people to comfortably play a game. At least I use a big TV, but others will be even more restricted with typical PC monitors.

Despite some strange design choices and the unfortunate omission of saves and online co-op, Legend of Dungeon still manages to be a hoot. But there’s a sense that it’s not finished; that what I really played was a polished beta and not the game Robot Loves Kitty envisioned. The good news is that more features are being planned, and being the price of a pizza or a couple of beers, it’s not a bad investment even if it’s not quite all it could be.