Choice Provisions is best known for the excellent rhythm-based series, Bit.Trip, a saga spanning six games (and one spin-off) which abstractly dealt with themes about a man’s journey through life. The studio has been toying with the idea for a similar title since as far back as 2010.

This idea was Laserlife, a rhythm-based space adventure which explores the concept of memories and how one’s life and accomplishments might live on long after they have passed away. 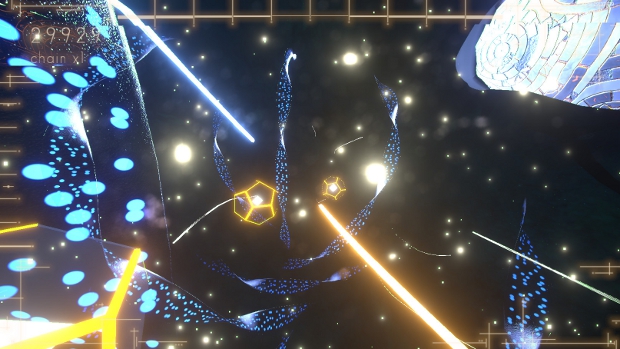 Laserlife tells the story of an astronaut who died out in space, whose body drifts aimlessly along with the wreckage of a space ship. The body is discovered by “future intelligences who have no concept of humankind” as they delve into the astronaut’s subconscious to extract memories in an attempt to learn of the skeleton’s history and how this human ended up dead in outer space.

Players control the future extraterrestrial entity in the form of two lasers. Each laser is controlled separately with the analog sticks, and they can both reach any part of the screen. Movement is very fluid and the lasers feel great to control as they spin and dance effortlessly around the screen.

Each level consists of four stages. During the first stage, Memory Molecule Collection, players must move into position and press the trigger buttons at the right moment to collect memory molecules. Later levels introduce molecules which must be held in position as well as ones which must be moved to a new position. An insufficient amount of molecules collected during the first stage will reset the level, but this was never a problem for me while playing on normal difficulty.

The second stage, Memory Harmonization, involves moving into position in order to hit targets. The hit boxes for the targets seem to be smaller than they are for memory molecules, so movements need to be slightly more precise, although the targets turn green once the lasers are in the correct position. These were the most difficult stages for me personally, even though they just involve moving around without having to time button presses.

The final two stages are the easiest. During the Warp Phase, players must avoid colliding with red barriers, or mental blocks, by moving towards the openings. Finally, the Memory Materialization stage finishes out the level with the player moving the analog sticks as quickly as possible until the bar at the top of the screen has depleted. Once all of this has been completed, the memory will be fully extracted and appear as a physical manifestation of a significant object from the astronaut’s life.

If players find that the game is too challenging, or too easy, there are a few difficulty settings to choose from which will increase or decrease the amount of obstacles to deal with. There are also leaderboards to browse, with separate leaderboards for each difficulty, if that’s something that interests you. 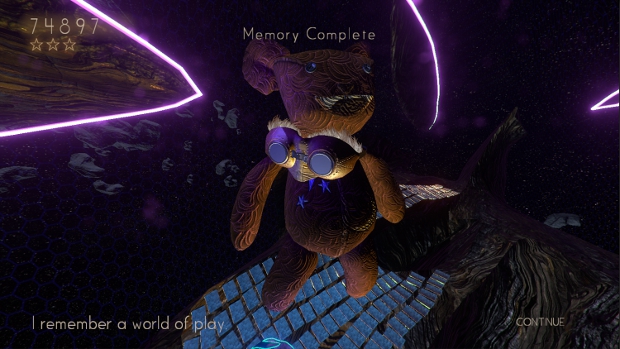 Music is obviously a huge part of any rhythm game, and the soundtrack could easily make or break the game. Laserlife‘s soundtrack is very chill and atmospheric, which fits perfectly with the outer space setting. It’s best to play this game with headphones in order to really focus on the music. I felt the soundtrack could have been a bit more varied at times, however, since all of the songs are very spacey and sometimes started to sound a bit similar after a while. Maybe they could have had some tracks that fit more with the theme of some of the memories, like a lullaby for the childhood memories, or even mixed in more spoken parts. One of my favorite tracks was used towards the end of the game, which had mission control voices being played over the music. I felt that was an idea they could have experimented with a bit more, because it worked really well for that one level.

Unlike the Bit.Trip games, the sound effects from collecting memories and hitting targets don’t really add much to the music itself, which was slightly disappointing. Obstacles are arranged so that they match up to the music of course, but interacting with them merely makes a dull sound which is often barely audible against the soundtrack. Having more robust sound effects might have helped make the soundtrack pop a bit more, and it would also be easier for the player to tell when they missed something.

Laserlife has a lot of big ideas and an interesting premise. I love the concept of extraterrestrial life coming into contact with a human skeleton adrift in space, and trying to learn something about the strange creature’s origins. The grand themes of human existence and the persistence of memory are ideas that I would like to see more games try to tackle. In this case, however, I found the overall experience to be a little underwhelming. It’s fun for a short rhythm game, but with only 12 levels, it felt like Laserlife never really got a chance to fully explore the broad topics it brought to the table.