Let’s take a quick look at the history of videogames with clay-based graphics. Skullmonkeys is a one-off that most people don’t even remember. The ClayFighter series has been dormant since the N64 days. Armikrog has been in development hell for years. That clay-based Loco Roco game for the PlayStation 3 never happened. Maybe worst of all, Dominique Pamplemouse is not yet a million seller. What the heck, guys!?

Looking at how few clay-focused games have made it to the market makes Kirby and the Rainbow Curse an even more interesting part of Nintendo’s overall strategy. It’s both safe and risky at the same time. This is not Kirby’s first foray into the world of arts and crafts, and Nintendo has toyed with the idea of clay graphics before. The cover art for the first and last issues of Nintendo Power were made from clay, and a lot of the promotional material from EarthBound used clay models. It’s clear that Nintendo has been toying with clay for a while, but Kirby and the Rainbow Curse is the first time it has finally gone all the way clay.

I hope it’s not the last. 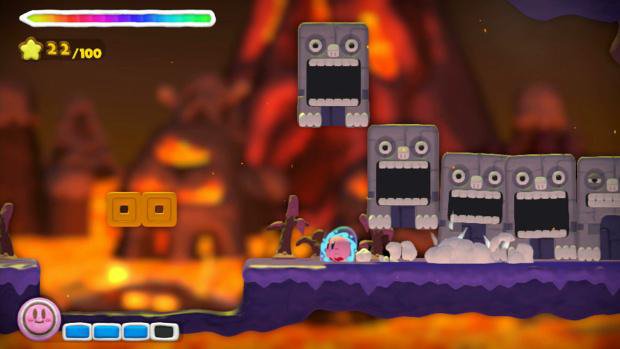 Seeing as everything in Kirby and the Rainbow Curse is made of clay, you might guess that the game’s story would focus on some calamity that has altered the very substance of Kirby’s world, forcing him to venture into the unknown in an effort to set things right. If so, you’ve guessed right. Sort of. The fact that everything here is made of clay doesn’t seem to actually phase anyone. Instead, the problem is that all the color has been taken out for the world by a couple of giant disembodied hands that look an awful lot like a certain pair of famous Smash Bros. bosses. No need to panic, though. The “Oh no where’d all the color go?” MacGuffin is in play for no less than three seconds before Kirby, Waddle Dee, and his new paintbrush pal Elline jump into a hole in the sky that takes them to a series of very colorful, often familiar environments.

It would have been easy to start the game with Kirby’s world being made from polygons (or whatever the heck it’s made out of in Kirby Triple Deluxe and Kirby’s Return to Dreamland) and then have it be transformed into clay by the villains, but maybe that would have been… too obvious? Too logical? Regardless, you should know from the outset that the story is nothing more than a thinly veiled excuse to see very cute things happen for a few seconds, leading up to even more very cute things. From there, the very cute things don’t stop until you either turn the game off or you die. This could be the most decadent, shameless display of cute-porn that Nintendo has ever displayed, which is saying from the company who brought us this and this.

Like the DS title Kirby: Canvas Curse, this new Wii U title ditches Kirby’s usual transformation antics in favor of a potentially divisive indirect control scheme. You don’t control Kirby here. You draw “rainbow ropes” for him to travel on. That may frustrate folks looking for a more traditional 2D platformer, though the game offers some of that too if you’re willing to delve into its multiplayer. As for single player, the controls do a lot to level the playing field for those new to the series, and for people in general. The single-player game has a grand total of three inputs: draw ropes, tap Kirby to make him spin dash, tap and hold on Kirby to make him do a super spin dash, and that’s it. These are the perfect platformer control mechanics for the Angry Birds generation. Anyone who has ever used a pen before will come into this game with the skills they need to achieve.

The controls may be simple, but they allow you to get into all sorts of risk vs. reward conflicts. Kirby is nigh invulnerable while dashing, allowing him to break through barriers, bonk his enemies into submission, and engage in other power moves, but what he gains in strength he loses in safety. A wildly dashing Kirby can be hard to handle, leaving the player to desperately draw the right ropes to help keep him out of harm’s way. Most of the game is spent alternating between taking Kirby forward with ropes, getting embroiled in some puzzle or combat scenario that requires dashing, and then trying to juggle Kirby back to safety after he loses control. It’s like running a three-legged race with an easily distracted, mildly intoxicated friend, which is probably more fun than it sounds. 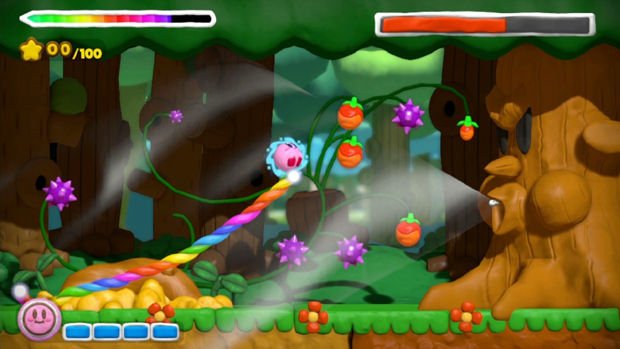 Speaking of friends, you’ll be missing out on a lot if you don’t check out the multiplayer. It makes good on the promise of truly “different-but-equal” asymmetrical multiplayer made by launch title New Super Mario Bros. U in ways that game never quite accomplished. The player with the GamePad controls Kirby in the standard indirect fashion while one to three other players take on the role of a spear-wielding Waddle Dee. Waddle Dee controls a lot like Kirby does in his main series, with free movement, multiple air jumps, and multi-directional melee attacks. There is no enemy swallowing for Waddle Dee though, and no transformations either. Kirby may believe in democracy, but he’s got to keep some of the good stuff to himself.

Waddle Dee’s advantages are offset by a couple of handicaps. He has half as much health as Kirby and he can’t scroll the action forward without Kirby. Sounds rough, but those handicaps are offset by yet other advantages. Waddle Dee can resurrect himself by mashing buttons for a bit, and he can pick up Kirby any time he wants. These ploys can be used for selfish reasons or altruism, depending on the circumstance and the relative moral quality of the player in question. 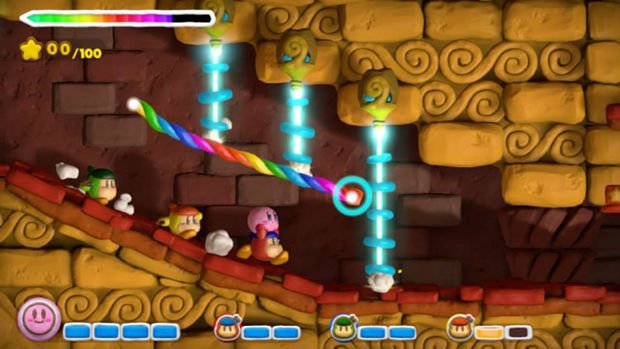 These power dynamics allow for some interesting relationships to develop between players. If Kirby is feeling stress and overwhelmed, he can ask Waddle Dee to run quarterback with him as the ball, playing the role of passive world-builder by drawing rainbow ropes to help Waddle Dee move forward. If Kirby is feeling aggressive, he can charge forward with rapid rope draws and spin dashes, leaving Waddle in the dust. Waddle Dee will need to get aggressive at least a few times though, as multiplayer offers exclusive mini-boss fights against those friggin’ hands that force our dear Waddle to really step up his game. Kirby can’t damage the hands at all. If he dashes into them, they’ll palm him easier than Jordan palms a Honeydew. During these tense encounters, it’s up to Waddle Dee to stab the hands into submission while Kirby plays keep away.

That’s not the only way the game plays with attraction and repulsion. There are times you’ll need to draw ropes for reasons other than dragging Kirby around, like digging through sand, deflecting lasers, and other tasks that may leave our pink hero vulnerable. Then there’s the need to earn stars, the game’s “collect 100 of a thing and then a thing will happen!” currency of choice. 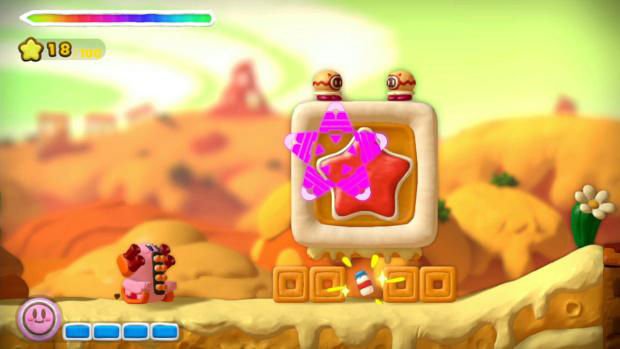 Unlike in the Super Mario games, the “thing that happens” here is more important than collecting an extra life. It takes 100 stars to do a super spin dash, and you can only hold a few supers at a time. You’ll need the charge attack to get through certain mandatory obstacles, so don’t waste them. If that’s not enough resource management for you, keep in mind that you can also run out of “rainbow rope juice” if you over do it with the drawing. Without juice, you’re 100% stuck, though it only takes about a couple of seconds for it to recharge. These are just a few of the ways that this simple game keeps you engaged in constant stream of small but interesting decisions.

Transformation-themed levels that allow Kirby to turn into a tank, rocket, or submarine and various boss fights are there to help mix things up, though the game never comes close to getting stale. Large, activity-laden stages filled with a mix of new and familiar enemies and environmental hazards give you plenty to do. There are 28 levels in all, each relatively long, packed with hidden areas and hard-to-get collectibles to encourage replay. Beyond Story mode, there are 40 Challenge levels that really put your skills to the test. Each gives you four rooms to get through, and 15 seconds each to get through them in. While Rainbow Curse is a generally freeing and sweet experience, Challenge mode can get downright vicious. It’s still cute though, because this game is always cute, even when it’s repeatedly killing you. 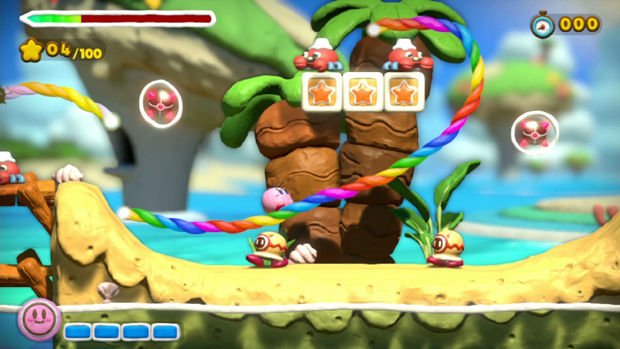 The game’s collectibles are probably where its cuteness reaches an apex. There is a jukebox mode where you can listen to songs you’ve acquired that features a little head-bobbing Kirby with headphones on, and it’s incredibly cute. There are storybook pages you can grab at the end of every level, and they are all painted and animated in a simple childlike style that is both humble and beautiful.

As great as that all may sound, the amiibo-like figurines you can collect in-game are even more disarmingly impressive. I’m not ashamed to admit that I’ve spent an inordinately long time studying them from every angle, wondering how HAL managed to make them look so tangible and believable. They’re a great example of how most modern console game depict a “real world” in a way that ends up feeling artificial, while Kirby and the Rainbow Curse depicts an artificial world that feels very real. I can only hope that HAL will make a new Mother/EarthBound game that looks like this someday. 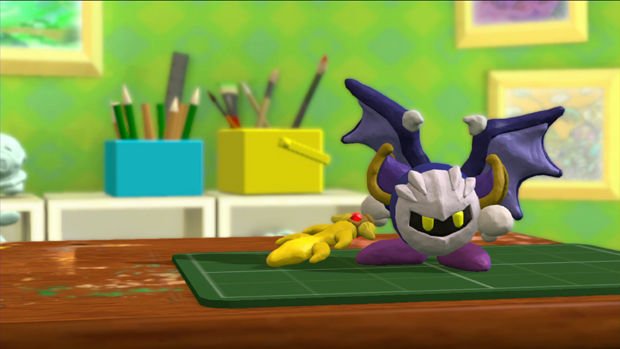 Kirby and the Rainbow Curse will amaze fans of traditional stop-motion animation with its achingly charming visuals. It works great as a lighthearted single-player platformer, a wild and boisterous multiplayer campaign, a tough-as-nails action-puzzle challenge, a bite-sized Off-TV handheld experience, or a big beautiful HD spectacle on your television screen, all depending on how you choose to play it.

It’s a game that has a little something for everyone, all without compromising its unyielding, unique, and undivided attention on its mission to blast pure adorableness into the world in all directions. If Kirby and the Rainbow Curse doesn’t make you smile, you may need to see a doctor for that.