Last year’s Kinect Sports was a rather tepid collection of games which showed some of the capabilities for Kinect as a control scheme and filled the much-needed role of “casual motion-controlled sports game” for the Xbox platform. A year later, Kinect Sports Season Two arrives to broaden our horizons to more simplistic, sports-based games.

Same as it ever was.

Kinect Sports: Season Two brings together a collection of six sports which are the basis for the mini-game collection; Football, baseball, darts, skiing, golf and tennis.

Of the bunch, the most impressive is the football game. Players take turns playing offense on a series of downs, with a range of passing plays to choose from (and a punt or field goal available on 4th down). Once the play is selected by either the player or the CPU coach, the player crouches down to receive the snap, then stands up or calls out a command to hike the ball. The goal then becomes to get the ball to a reciever before being sacked with receivers showing their readiness with an icon over their head. If a pass is complete, the player can then run to try and gain additional yardage.

The football game is surprisingly fun. Maybe it’s just the act of crouching down and standing up to start a play, but it works a treat for getting you in the mindset. Occasionally, I would accidentally throw a ball to an unintended recipient, but it generally works well. When you’re running for yards, you can lean to dodge an oncoming tackler which feels great when you can pull it off. 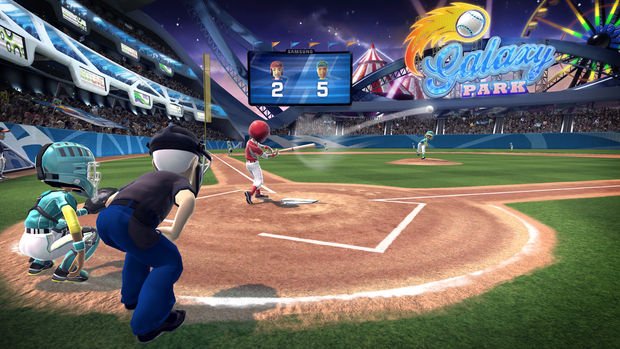 Baseball is a major simplification. Players will swing for the fences, run to first, pitch and catch. Batting feels responsive and accurate, though pitching didn’t always produce the pitch I expected from my motions. After you’ve hit a ball, you’re able to run in place to speed your avatar’s arrival at first base. You can even slide to get a boost of speed at the end of your run. The idea of sliding into first goes against every instinct I have, though it can (despite the laws of physics) make the difference between being safe and out.

The only action the defensive player can take following a pitch is to hope that the ball is flying towards a fielder, whereupon the game will let you move and try to catch it (but then the runner does nothing). The catching isn’t really fun, it just breaks up the action in a different way, but that there’s no participation on part of the defensive player when the runner is headed to first on a ground hit means a lot of yelling at incompetent AI. But at a two-inning game, it’s not long enough to get truly dull or frustrating.

The tennis game in Kinect Sports Season Two is the least impressive contribution.  It offers play for two simultaneous players without any semblance of taking turns (save for serve), which is great. And it works fairly well, certainly better than the table tennis game in Kinect Sports as sweeping arm motions seems to allow for a greater range of swings but it barely feels like an improvement over the tennis packed in with the Wii years ago and can quickly be dismissed. 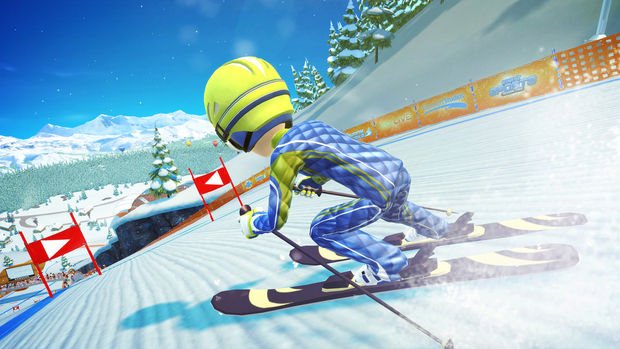 Skiing is the other game which allows simultaneous play, featuring three different slalom courses. Crouching allows you to gain speed as you lean to turn and pass between gates. Jumps appear periodically, slowing you down if not timed correctly, and it takes some practice. Skiing is fast and fun, particularly with another player next to you.

Golf is pretty solid too, but is mostly enjoyable because it makes effective use of gestures. Looking down the course toward the cup is executed by putting your hand to your head and when you’re ready to swing, you stand sideways and aim by walking parallel to your television, which causes your avatar to turn. When you’re ready to swing, you just carry out the action but if you want to take a practice swing, you can simply say “practice” and you’ll step back from the ball. If you need to change clubs, stick your arm out and you can manipulate a menu to select a new one. It’s intuitive, easy to play and features some devilish holes.

Last but not least is the darts game, which is a round of 501. In 501, hitting targets reduces your score with the ultimate goal being to reach zero points exactly by hitting a target on the board’s double-scoring outer band. A targeting reticule is aimed with the throwing hand. To throw, you just draw back and follow through forward. 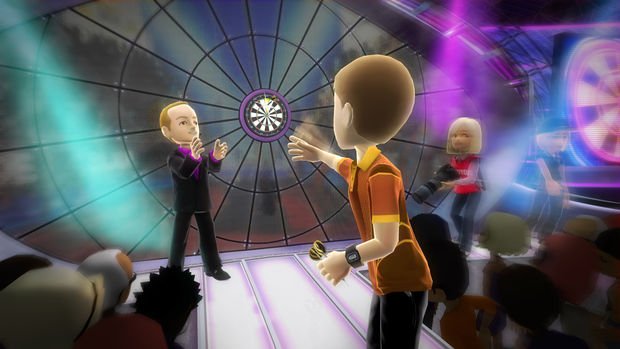 It does not come right away. Kinect can be finicky, especially if your conditions aren’t always perfect, and I had difficulty figuring out exactly the right way to pull back. To help account for everyone’s situation, the darts game has three height settings to choose from. Once you do have the hang of it, the game becomes pretty easy if you have enough patience. Players looking for a greater challenge from the darts game will find more excitement in the Pop Darts mini-game, where you must hit stationary and moving targets in a limited time.

Five of the six games on Kinect Sports Season Two feature a secondary mini-game. Baseball has a home-run derby, where hitting it out of the park consistently earns high scores and longer play. Smash Court is a target-oriented tennis game. Golf, too, has an accuracy game which has you hitting balls to islands and earning points based on where they land. Lastly, Skiing’s Downhill Dodge game has you avoiding obstacles in a fast-paced downhill track. Pop Darts and Downhill Dodge are a lot of fun, but the rest of these diversions are pretty ho-hum additions. 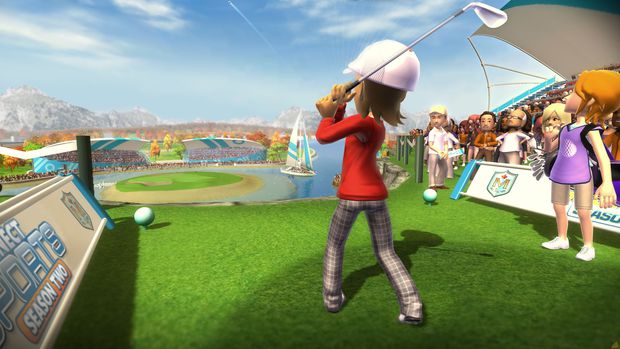 As is the norm with these collections, you’re going to get the most out of it if you have people around to play it with. A quick-play mode is ideal for a party situation, as it sets up teams and randomly selects games to play. But not having people around to play with doesn’t mean you have to go it alone. Online play works nicely and it’s actually kind of amusing to watch people pose for celebration moments during games. If you can’t get it together to play at the same time, a Challenge mode exists where you can send a score challenge in one of the games to someone else on your Xbox Live friends list which they then have a week to respond to.

Kinect Sports Season Two rounds out the collection found in the original Kinect Sports with a competent batch of games without a really bad one in the bunch. It can be a good time for families and folks who like to party and ideal in small doses. At the same time, it struggles to be compelling for more than the most casual of encounters and the limitations of the simple games don’t really hold up for repeated playing. If you absolutely need more motion-controlled sports mini-games, this has them but nothing about this title feels like an essential part of the Kinect library.