The rhythm is gonna get ya

For generations now, the marriage of music and video games has brought us some absolute classics. Whether it’s the comical hip-hop of PaRappa the Rapper, the million-dollar-making Rock Band franchise or the DLC-smothered Persona Dancing titles, the joining of big beats and button presses makes the two genres fit together as snug as a bug.

There’s a certain genre of music game, however, that likes to engage a little more with the rhythm and spirituality of the music itself, often presenting it in obscure, abstract ways. Titles such as Rez, Vib-Ribbon, Chime and Child of Eden, that attempt use the music to create a stage for the player to dance on, be that player a polygonal human avatar, or a long-legged, wire-frame bunny.

Just Shapes & Beats, by indie outfit Berzerk Studios, falls into the latter sub-genre of music games, attempting to deliver a fun-but-challenging interactive experience for you and your friends, laid over a series of great tracks, while breaking video rules with its abstract but magnetic mood. And, I’m glad to report, it succeeds. 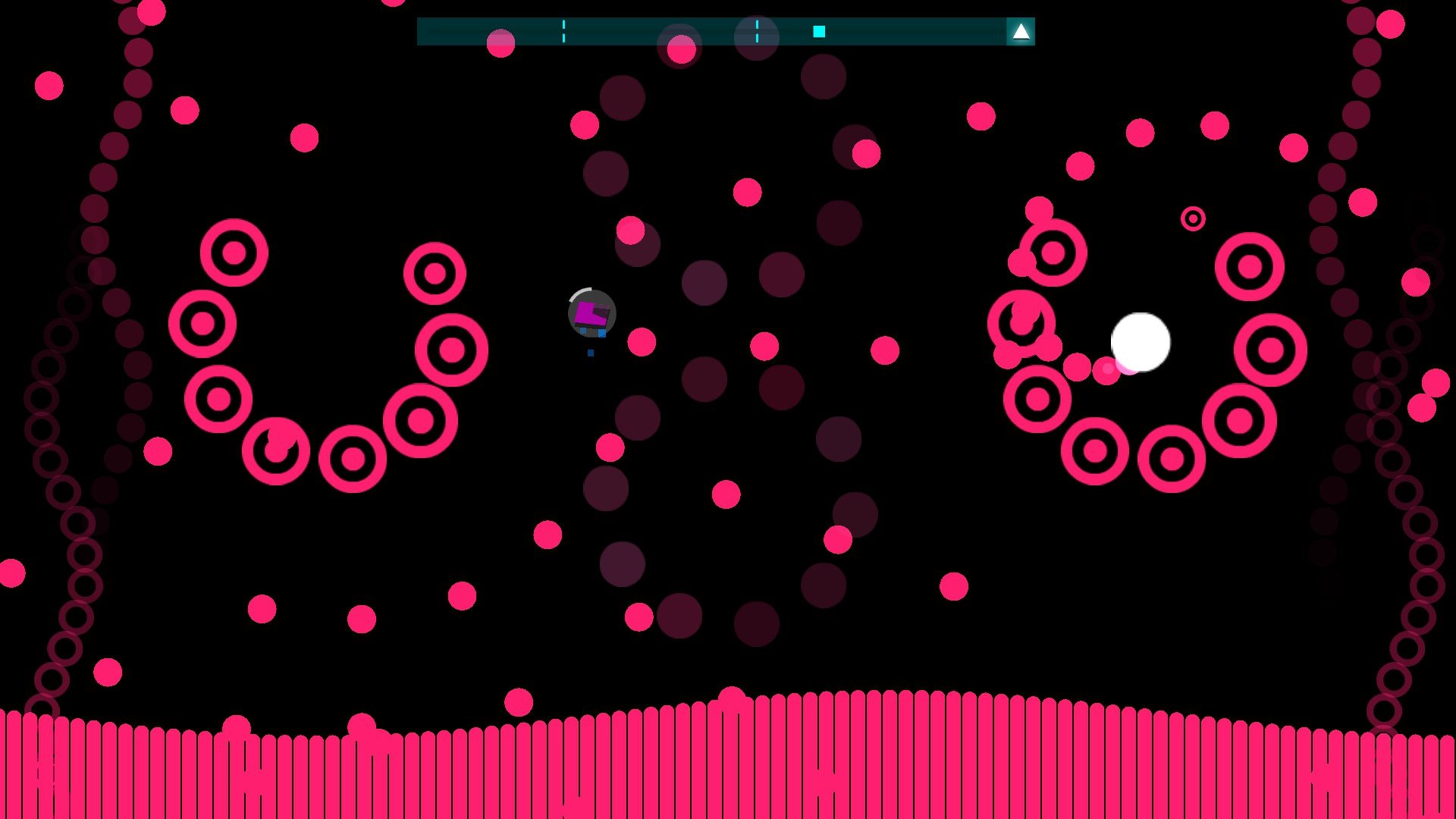 As its title implies, Just Shapes & Beats is incredibly simple in its conception, but that simplicity belies a really enjoyable, tricky and solid-sounding experience. Up to four players control one of a selection of small shapes and take on and increasingly difficult music tracks. The rhythm and the beat visually manifests on-screen as all manner of objects, of different patterns and sizes, that must be dodged until the track ends.

The attacks can come as huge beams, bouncing hills, snake-like spirals or pulsating shapes, all appearing, moving and attacking to the rhythm of the music. The players cannot defend themselves; survival is based entirely on slick maneuverability and lightning-fast reflexes. If you get struck, you lose part of your shape. If you break entirely, the game rewinds (literally) to the last checkpoint. Break three times and it’s Game Over. Or is it?

That’s the premise of the game summarised, but Just Shapes & Beats applies this simple concept to numerous modes, all designed to challenge the players. Whether score attack, multiplayer challenges or even the game’s bizarre and oddly emotive Story Mode, JS&B takes a basic concept, but presents itself in new ways to encourage further play, all while keeping you hooked with its excellent soundtrack.

Composed by Nitro Fun, Tristam, Noisestorm and many other chiptune artists, the score of Just Shapes and Beats is, in itself, a tribute to the history of gaming music. Though most of the tracks feature pounding basslines and the type of “wub wub” that makes me feel old, the overlaid melodies recall everything from Vangelis-style synth, to the Commodore 64’s SiD chip, to haunting RPG-style themes and more. Because the music directly influences the playing field, it means you can go from dodging booming, bass-heavy monsters to calmer, but just as deadly, bullet-hell sequences. It keeps the rhythm of the stages fresh, so you aren’t just gunning at 100mph stage after stage.

Where the difficulty really notches up is in the game’s sporadic and very unique boss fights. Players will come up against nicely-conceived boss characters, as they attempt to dodge aggressive attack patterns whilst trying not to be distracted by the cool little stories being told as they adapt to switch up their attack. These bosses can be a bit frustrating. The pattern recognition is real, sure, and the bosses mostly have “tells,” but sometimes you’ll get walloped, out of nowhere, by an attack you couldn’t possibly have seen coming. Trial and error is never fun in games, and it isn’t on the odd occasion it shows up here. 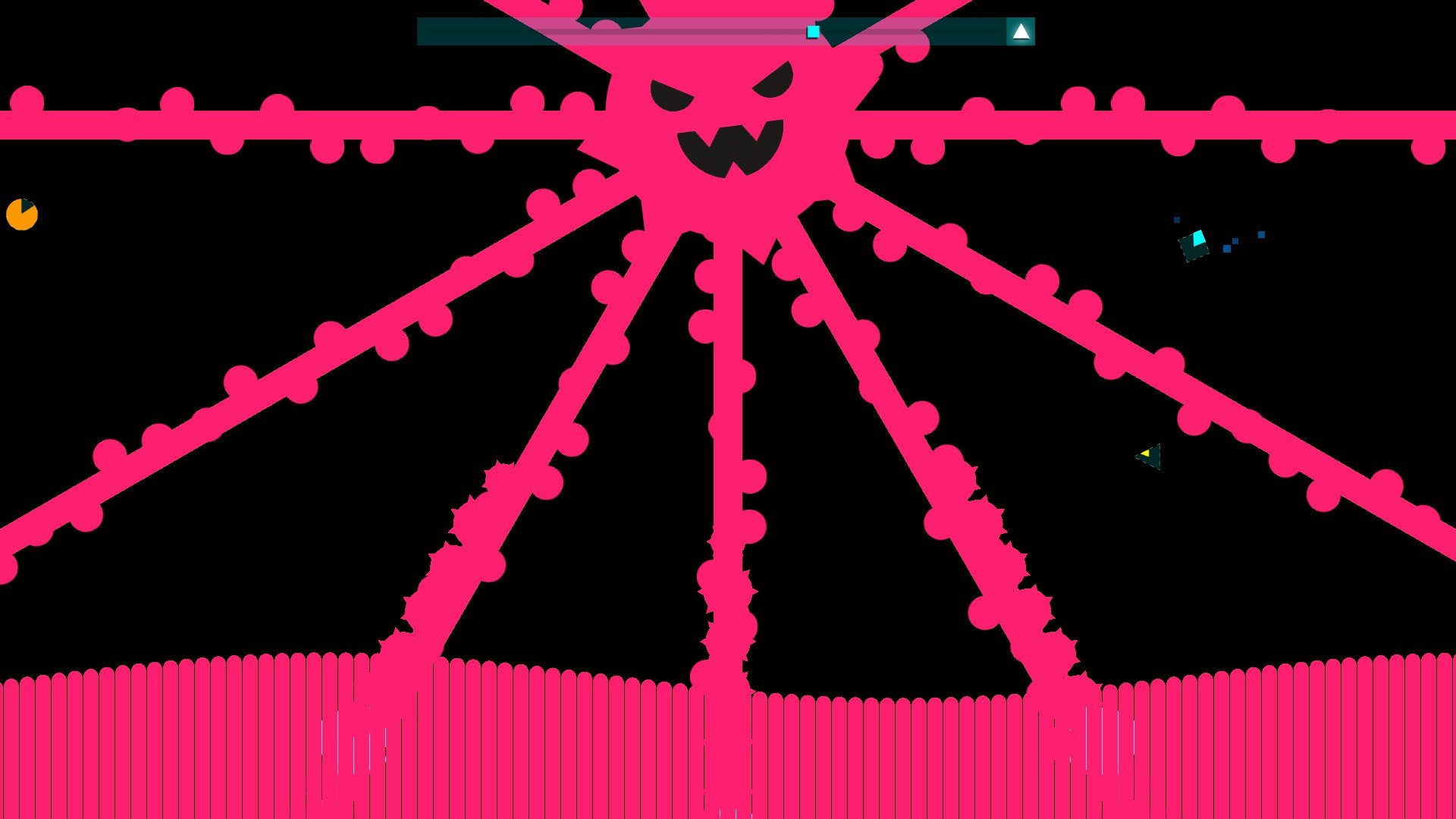 Despite its uneven difficulty balance and its occasionally grump-inducing boss battles, Just Shapes & Beats keeps pushing you forward thanks to its great music and overwhelming sense of original style. For a game so basic in concept and design, a lot of love and attention has been given to effects such as screen transitions. Even the map and game-over screens are cleverly and beautifully created. There’s also an easier mode for when things get tough, and a non-stop Party Mode, that keeps the music pumping and the game unending, perfect to have in the background for pick-up-and-play action. If you have parties. Or friends that is… [sigh].

This is about as pure as a game can be. You learn how to play it in a few minutes, but can sit with it for hours. Its stylistic visuals and awesome soundtrack draw you in and keep you hypnotised, while addictive and challenging gameplay teases you with frantic block-dodging mayhem, great multiplayer modes and weird, surprisingly emotive “characters.” In a time of incredible looking, but often flabby titles, it’s nice to be reminded that, sometimes, Just Shapes & Beats is all you need.