It’s no secret that I adore the Joe Danger games. The series immediately makes sense once you get your hands on a controller; it simply feels right. From there, things quickly escalate. While not as hardcore in difficulty as the Trials franchise — which I’m also a big fan of — Joe Danger does serve as great, arcade-style counterpart that still comes with a bit of a challenge once you dig in.

I was eager to try out Joe Danger 2: The Movie, especially knowing that this will likely be Hello Games last proper Joe Danger game. Continue reading to see if they’re ending on a high note. 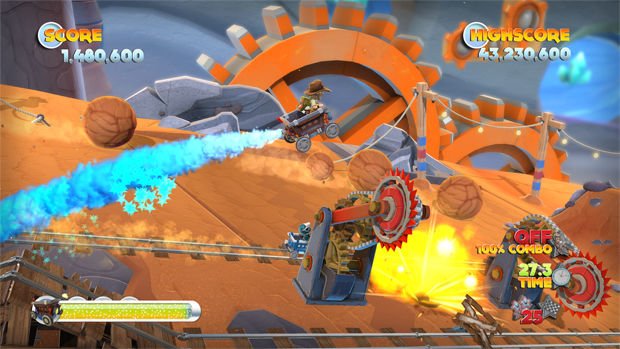 Joe Danger is back, and he’s decided to use his daredevil chops to start a career as a stuntman in action movies. As it turns out, this gives him a great excuse to continue performing crazy stunts across much more diverse locales while using some new vehicles. The game is broken up into six acts, the final of which serves as a fittingly titled Director’s Cut.

With names like “Indiana Bones” and “Total Freefall,” you should know what you’re getting into here. These acts have you sneaking through secret bases as a ski-bound spy, jetpacking around rockets fired by robots, and chasing after robbers as a cop. That might sound super ambitious at first, but really, this is largely more of the same Joe Danger from a gameplay perspective.

Vehicles do feel different in terms of weight and maneuverability, though the unicycle and jetpack end up being the biggest departures from the game’s arcade-y norm. The former requires a watchful eye and quick reflexes to stay balanced, while the latter is used in levels that feel much more platformer-oriented. Instead of automatically pushing forward, with the jetpack, you can go anywhere you please (within reason) inside levels. This is a nice change of pace from the core gameplay, which series fans will be very used to by now. And as different as it is, the jetpack still feels fitting for Joe Danger.

The six acts of Movie Mode contain more than 30 levels. These can vary in length significantly, especially depending on if you’re going for full completion on them, which you ought to be — that’s half the fun. If repetition was a concern for you previously, I’m happy to report that just about all of the levels look, feel, or play differently from one another. Between this gradual introduction of concepts and new content, and an impressive amount of polish overall, Hello Games has gotten closer than ever to making a Nintendo-esque videogame.

Players coming in from the original Joe Danger and not Joe Danger 2: Special Edition are going to have a hell of a good time. The transition from Special Edition to The Movie is, rather predictably, less of a leap. Considering how well-made the predecessor was, this is hardly a huge complaint.

In addition to simply surviving levels, you’ll be tasked with completing objectives which reward stars. Examples of star activities include keeping a combo active throughout the entire level, finding hidden collectibles, and smashing targets. Individually, they aren’t usually too much trouble, but on 30 of the game’s total levels (more on this in a minute), there are also Pro medals up for grabs.

Pro medals are awarded when you finish a level while obtaining all of its stars in a single run. This can be a lot of work when a level has four or five stars to earn in total, but thankfully, these medals grant access to new playable characters; that’s a decent prize in my book. Even players of average skill should find themselves unlocking new content frequently, which serves as encouragement to keep playing further. 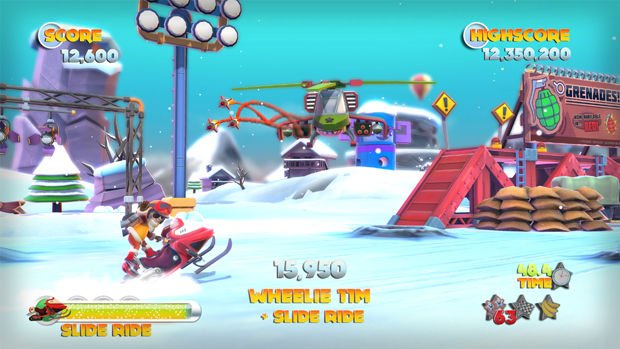 Beyond the main Movie Mode, there’s also a Deleted Scenes mode, which is broken down into six cups (similar to the aforementioned acts). This is essentially a continuation of Movie Mode in that levels are much more difficult. The first handful of them are smartly used to make sure you know how to do some of Joe’s more advanced moves (such as double jumping), which become a necessity later on. Although the stage variety isn’t as great as in Movie Mode, the increased challenge is appreciated. These are the levels that will feel most satisfying to fully complete.

Multiplayer returns, and this time, up to four people can play together offline. It’s nothing too exciting, mostly because there are only five levels to play on. It’s nice that it exists as an option, but Joe Danger has always been about leaderboard battles in my mind. Speaking of which, you’ll now see little replay ghosts with Gamertags flying around levels. These represent playthroughs others have completed and are perfect for showing how and why that one dreaded person on your friends list always manages to beat your best scores.

The level editor — or, Movie Maker, as it were — is back. The system is about as intuitive as you could hope it to be, and going a step further, you’re introduced to the system by playing puzzle-like levels which require you to pause the action and edit the placement of objects to proceed down the track. No terrible wall of text for instructions or anything! The Movie Maker allows you to easily drop in materials, test the level, and then publish it online. Frankly, it’s terrific. User-made content is broken down by a few categories — developer picks, top downloads, friends’ levels, latest levels, and hot levels — which should be sufficient once the community becomes active. 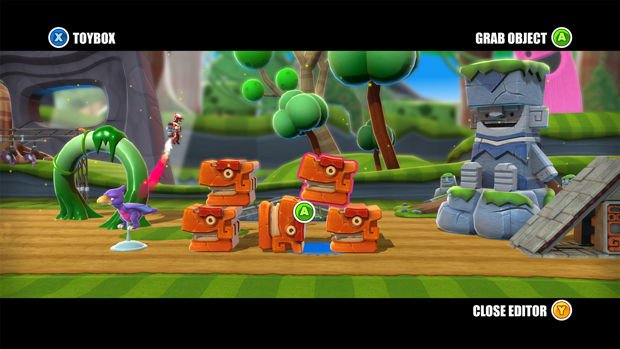 As a package, Joe Danger 2: The Movie is excellent, though in the context of the series, I didn’t find it to be quite as excellent as Joe Danger: Special Edition was when it first released.

The movie premise, while somewhat basic in its implementation, provides a good rationale for Joe to leave his trusty bike behind for some of this adventure. At times, the on-screen action can get a bit too cluttered, especially for levels with multiple lanes and eye-catching stuff happening on all of them. Frustration is bound to come up in games of this nature, but it’s unfortunate to see it stem from this source. Even still, most levels don’t have the obstruction problem, and the end result is a very lively, beautiful-looking game.

Fans won’t be astounded by Joe Danger 2, but they will have a polished, enjoyable, different-enough new installment to look forward to playing. You can’t ask for much more than that.