The pen is mightier

Visually striking indie platformers aren’t really that new of a thing. Standing out from the crowd is hard to do in the overcrowded indie market, but sometimes a game comes along that looks so strikingly unique that you just have to take notice. Inked is one such game, utilizing an ink line art style to create a wonderfully realized environment mixed with some samurai-inspired character designs.

Sadly, for as beautiful as Inked may be, the gameplay is simply not up to snuff. 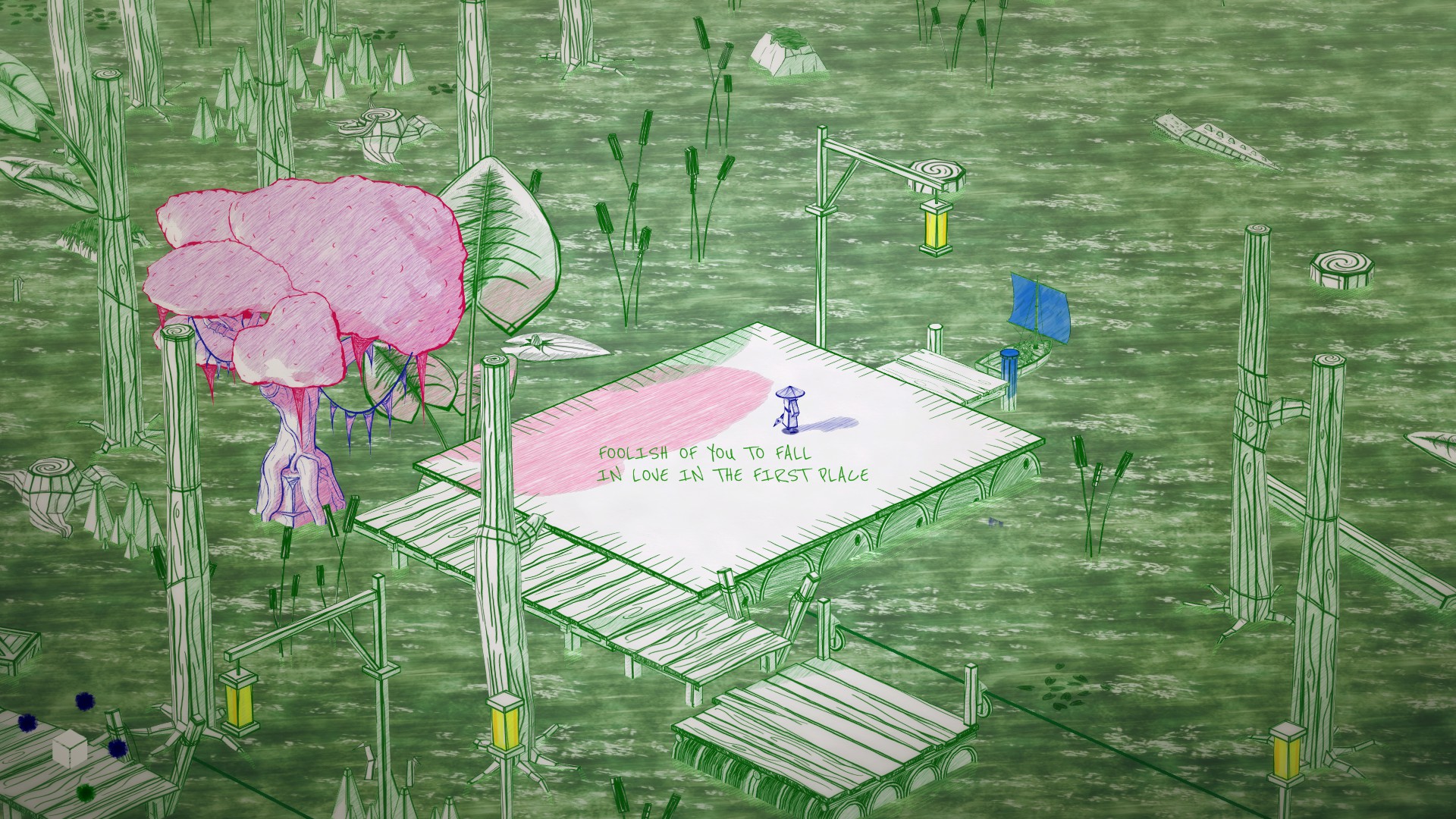 Inked follows the story of a man named Adam, an artist who draws a comic starring a nameless hero. This hero is a wandering ronin that is searching the land for his lost love, a woman naked Aiko. You’ll get bits and pieces of a greater narrative that involves the two, almost echoing the film American Splendor with how it weaves the lives of both characters together. This is all used to some great effect, telling a tale wrought with sadness and emotional conflict.

The general gameplay is basically a puzzle platformer. Inked features a moveset based on the tools that an artist uses, namely a pen. With this pen, your main character can create different platforms in the environment to traverse on. The game starts fairly simple, but quickly adds more tools to your repertoire to have you mix and match them. You’ll place objects like a square block or an angled ramp to help you climb walls or cross gaps before setting down a fan to help move a boat across a lake. It is creative and definitely capitalizes on the art style. While you won’t have a sprawling list of options available to you, solutions to puzzles aren’t dead giveaways. You’ll need to flex you brain a bit to continue progress in Inked.

The controls are straightforward enough. You’ll use WASD for movement, Q to bring up a radial menu of your ink tools, E to interact with certain objects in the environment, Shift to run, and the mouse to place your ink objects in the world. Gamepad controls are also supported, but I wouldn’t recommend them due to how slow the right joystick is. While those controls are fine, on the surface, the biggest issue with Inked’s gameplay comes from its isometric viewpoint.

Inked utilizes an isometric view that has the world titled at an angle. While this is fine, in and of itself, Inked is a game that often demands precision platforming. Trying to make specific jumps without being able to discern their distance is an exercise in frustration. Sometimes trying to place objects up against walls is futile, with the camera not cooperating with your character. You’ll have a clear vision of how you want to execute a solution, but your block will get placed far above you or refuse to go next to a wall.

This problem becomes doubly frustrating when Inked decides to throw in time limits on some puzzles. The earliest such instance is a small pool you’ll need to fill with water. You have to place some blocks in front of a hole in the pool so that water will fill, but you won’t have enough ink to place the ramp onto your platform and the blocks for covering the wall. You’ll have to place one block down to start the water rising, then quickly change to the ramp before getting drowned, which sometimes doesn’t happen because of the isometric view.

Making matters worse, you cannot move in cardinal directions without holding two buttons. The game is working on the logic that holding W will walk you towards the top of the level, but it does this without regard for the isometric viewpoint. None of the levels are laid out with paths this way, so traversing a simple sidewalk demands you hold A and W together, otherwise you’ll just venture off in the wrong direction. 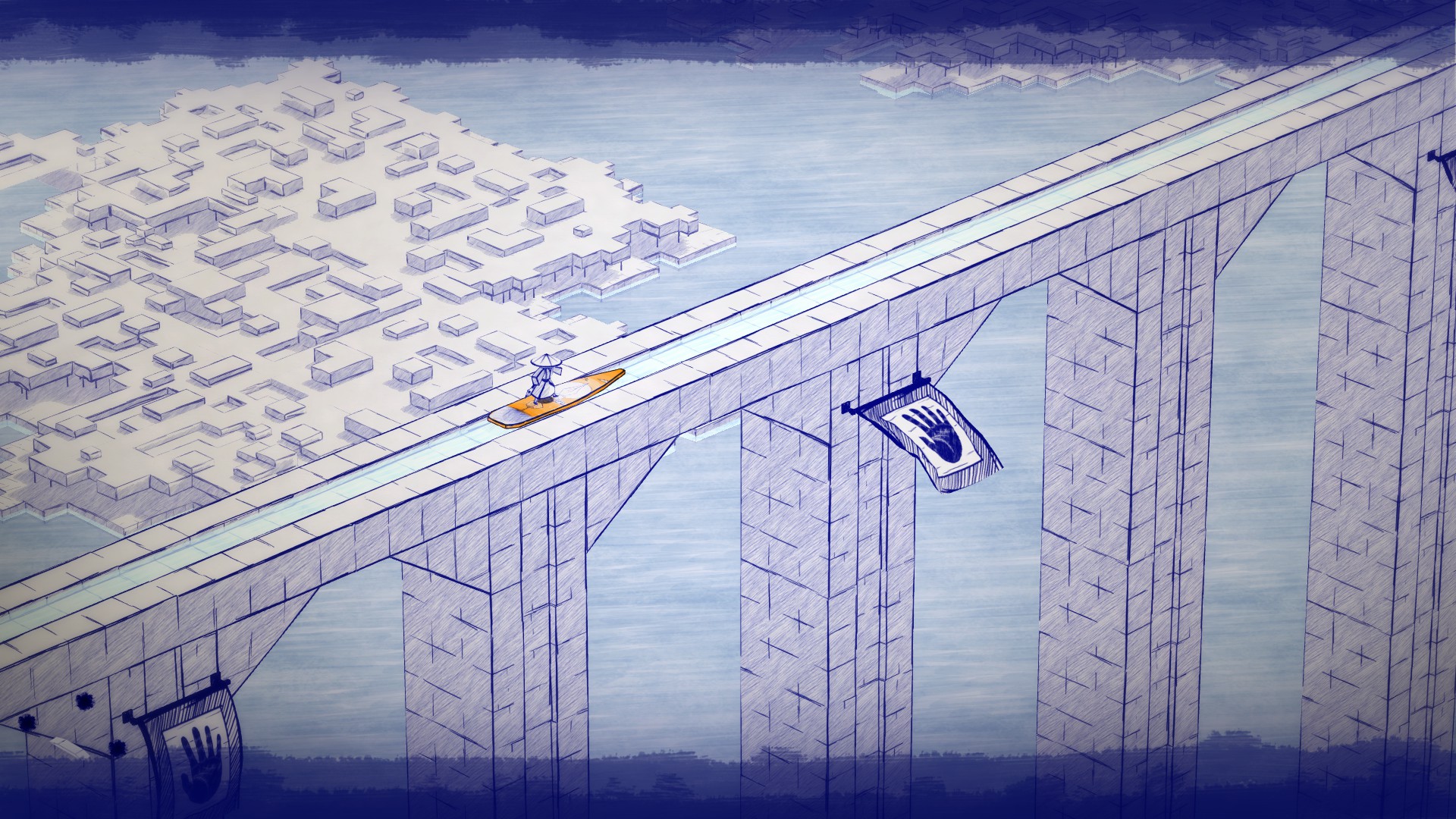 I could get over little issues like that, but I constantly walked straight off platforms because of the viewpoint. There are also certain puzzles that utilize momentum and trying to place a sphere on a ramp you can’t clearly see is a nightmare. I just wanted a ball to roll down a ramp, but that can be a little too much to ask for. At least without a time limit, these problems don’t compound each other. Where the game starts to get real wacky is with the “boss fights.”

There is no combat to speak of in Inked, but there are a couple of bosses. These mostly take the form of higher-intensity platforming challenges, but they exhibit the same kind of overbearing frustration that Super Meat Boy’s bosses had. These encounters require precision and acute understanding of the mechanics, but will harshly punish you if you fail. Dying during an encounter often resets the entire battle, meaning you’ll spend a large chunk of your playthrough redoing the same thing over and over. I can’t tell you how many times I dodged the falling boulders in the first challenge only to make it right to the end and perish.

I also can’t get over how poor the puzzle aspect is executed. While it starts off perfectly fine, later challenges fail to properly introduce concepts. One particular instance required me to use my gust block to push clouds before freezing them, but this was something I had never done in the game at any other point. Not only that, I placed my gust block thinking maybe that was the answer and the clouds disregarded that gust block. I ended up trying a bunch of different things before giving up and looking at a walkthrough and seeing I was just a bit off on my placement. 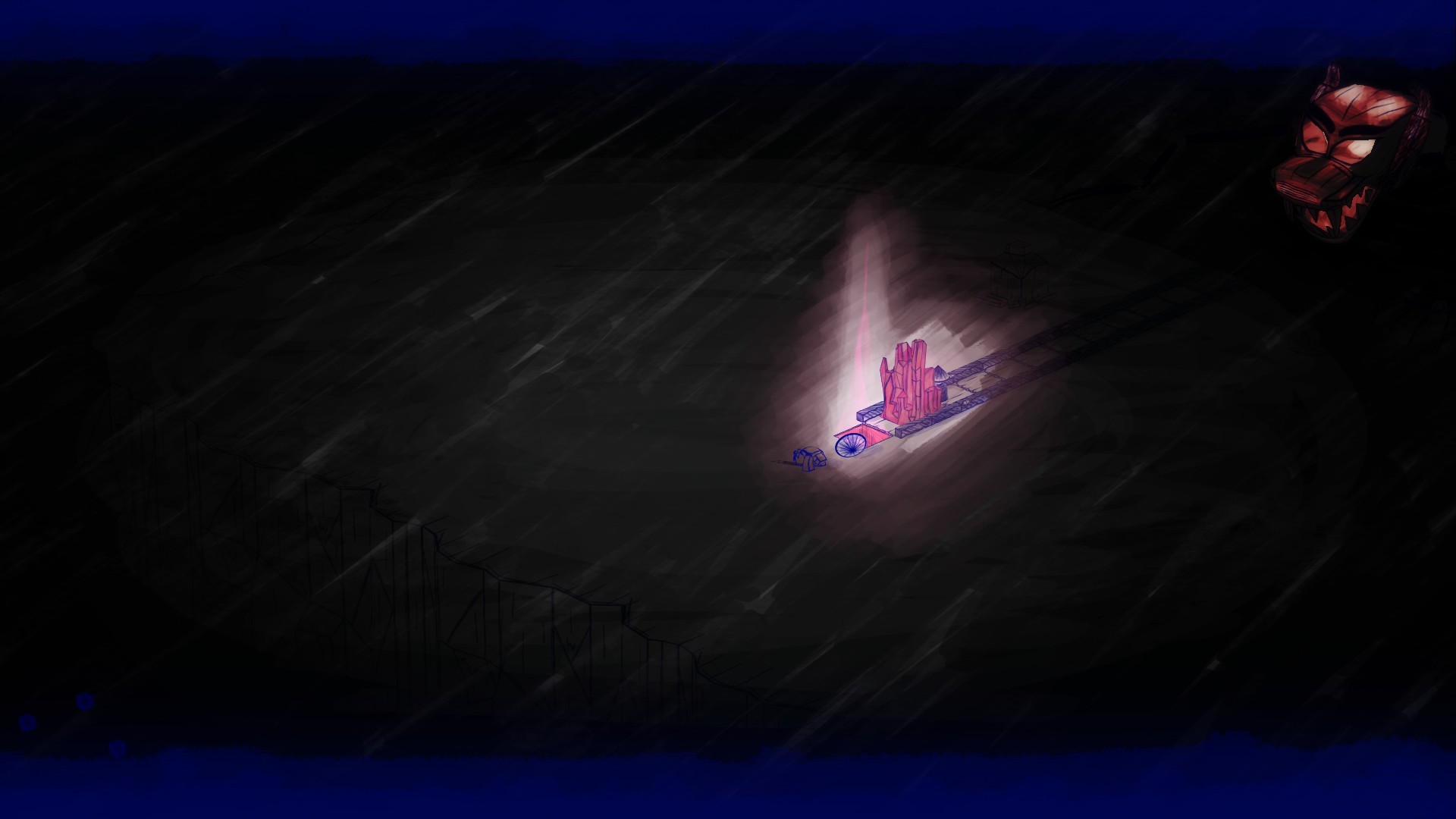 What’s more, sometimes events wouldn’t trigger, prompting a checkpoint restart. These problems came up a bunch of times, but were all relegated to the back half of the game. I’m not sure if development was rushed or not, but Inked does not have enough momentum to maintain itself. This is a real shame, because the presentation is top notch.

The soundtrack used during certain scenes lends a heavy atmosphere that perfectly compliments the somewhat dark subject matter. There are moments that wouldn’t feel out of place in a spaghetti western or a Zatoichi film and they’re all filmed with careful consideration for camera placement. Inked is constantly a joy for the eyes and ears, though the voice acting is a little weak.

I would get incredibly frustrated and be cursing up a storm, but then the music would kick in and the game would cut to a letterboxed view and I would be in awe. Developer Somnium Games certainly knows how to capture a moment; I just wish their ability to make memorable scenes carried over into the gameplay more often. 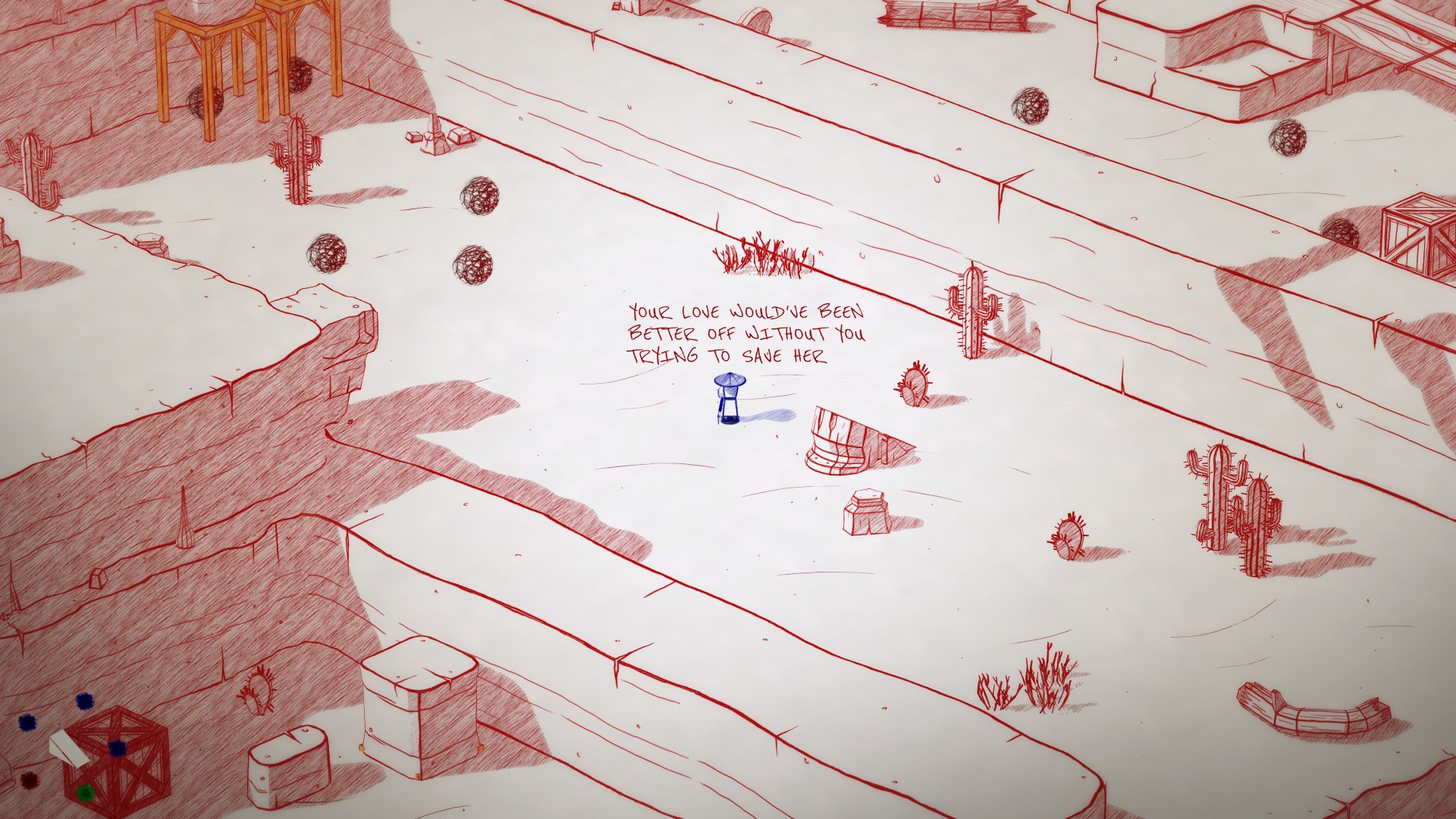 While a patch is in the works to combat the awkward movement, I’m not sure how much I could recommend Inked. It is a visual splendor, but the puzzles commit a lot of Gaming 101 sins. You have these very cinematic and well-shot moments that give way to obfuscated puzzles and sloppy controls. I want to love Inked, but it does just enough to turn me off and leave me frustrated.

There is a lot of potential here for a great idea and certain moments are truly awesome, but the whole experience just doesn’t hold up and ends on a low point. If you have a stronger stomach for finicky controls, though, Inked might just be the game for you.