Wading through the flood of Cave Story ports and remakes, with new ones seemingly being announced every hour on the hour, it’s easy to forget that creator Daisuke “Pixel” Amaya has indeed made other games. One of his earliest efforts is Ikachan, released more than four years prior to the original 2004 version of Cave Story, in fact.

With lovely sprite work, soothing music, and charming characters, Ikachan laid down the framework for Cave Story. Through it, you get to see first-hand the genesis of Pixel’s trademark style of open-world platforming, making Ikachan a very important digital milestone.

But if you go into Ikachan expecting anywhere near the same scope and depth as Cave Story, you will be sorely disappointed. 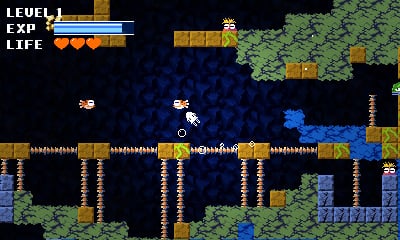 Ikachan is an open-world platformer set below the waves. The titular squid hero wakes up one day trapped in an underwater cave inhabited by a small village of sea anemones led by a large fish named Ironhead. Frequent earthquakes and famine put the residents at grave risk; as an outsider who mysteriously found his way into the cave, only Ikachan has the means to save everyone.

To swim, press A or B to thrust and press left and right to direct movements. You quickly gain the ability to damage enemies by swimming head first into their bodies, and later you acquire a dash that allows you to break bricks directly to your side. By killing enemies or collecting blue fish, you gain experience which leads to more health and greater attack power.

Aaaaaand … that’s it, really. Explore the cave, run errands for the townsfolk, and find a way out. All in all, you can probably breeze through the entire game in a couple of hours. There are no bonus modes, boss rushes, or anything of the sort to keep you engaged after the credits. 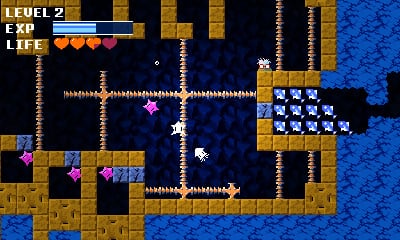 Despite its length, Ikachan manages to pack more charm than games five times as long. There is an unfortunate food storage guard being coerced through blackmail, a smart-talking starfish, and a self-serving goon who wants whatever food is left all to himself. There’s a blanket of melancholy over the game’s events, compounded by a soundtrack fueled by hope yet tinged with lingering sadness. It’s a testament to Pixel’s knack for world-building that he’s able to express so much through so little.

The size of Ikachan‘s cave is a mere fraction of Cave Story‘s floating island, but the spirit of exploration and discovery is still present. There may be fewer things to do or secrets to uncover, but there’s just enough to compel you towards the game’s heartwarming yet slightly weird conclusion. Which is why it’s disappointing that the game ends so quickly.

As with Cave Story, Ikachan is former freeware being gussied up and given a retail release. But whereas Cave Story was expansive enough as is and then given just the right amount of extra content for its WiiWare excursion, Ikachan remains quite barren. Sure, the map has been slighlty rearranged from the PC original, there are a couple of new enemies, mild stereoscopic 3D has been added, and super talented Nicalis artist Lindsay Collins contributed a couple of lovely pieces of art, but on the whole, the experience is not much improved. 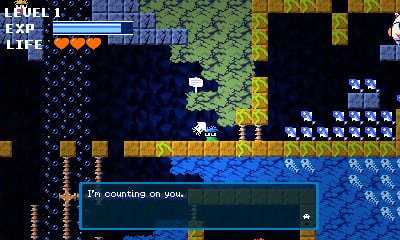 And let’s not forget that Ikachan is essentially a prototype, practice for the game Pixel really wanted to make. I appreciate that Nicalis is trying to share more of Pixel’s catalog — such as this, the foundation for his later works — but asking us to part with $5 for what amounts to a concept project is a little too tough to swallow.

Ikachan is a marvelous introduction to a much larger, more ambitious game. But that’s all it is: an introduction. If you are willing to accept that, you’ll happily enjoy the short time you spend in its watery world.