I’m not a huge fan of most indie games. There I said it. I find most of them derivative and lacking in quality, and I hate when quantifying a game I have to say, “It’s a great indie game,” as if that fact gives it an excuse for being less engaging or of lesser quality.

The duality of this is every once in a while an indie title comes around that blows my mind with how fun/clever/unique it is to the point where some of my most beloved experiences in gaming are with FTL, Out There, Little Inferno, Papers, Please, and now #IDARB. 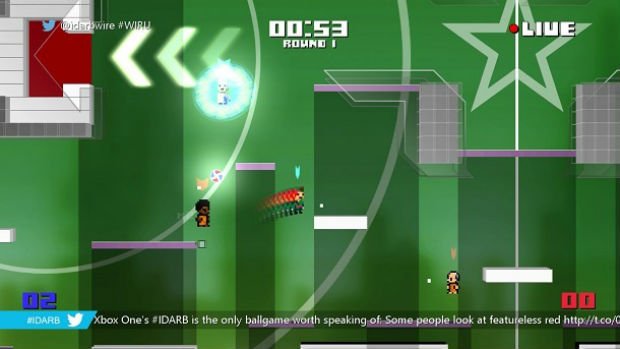 #IDARB is played on a 2D “field,” on which up to eight-players on two teams vie for control of a ball. The objective is to get the ball in the other team’s goal more times than they do so you can win. In these regards, it is like pretty much every sport except NASCAR (or wrestling, where getting a ball in the opposing teams goal is a felony), in its rule set. A round starts with players rushing for the ball which drops in the middle of the field.

As soon as you hit a loose ball, you’ll automatically grab it, but you can’t ever get more than a tenuous grip on it and the competition will be blasting you with force fields, which extend in a small circle outside of your character, to knock the ball loose. There are four rounds, and a half time mini-game, each match only takes around 10 or so minutes to complete. Those are the basics. It’s that simple on paper.

What makes #IDARB unique is the execution. While playing you’re treated to a cheering audience and announcers making nonsensical quotes from TV shows, movies, and video games. There’s a plethora of pop culture references all over the game, the half-time minigames are spins on titles like Duck Hunt and Flappy Bird, when someone quits a match before it’s over a “rage quit” meme is shown, and a ton of other little blurbs are spread all over the game. Unlike another recent release, all the “hip” and “random” content felt like it was all purposefully over-exaggerated and I found it to be a huge boon to the games colorful and fun character.

The gameplay itself is frantic, simple, and a blast. It has to be seen to really understand how fun it is so I recorded a video of myself playing which gives a good impression of the typical match. The only things you have to worry about are movement, passing/shooting (which is the same button), and the force field (used for stealing and blocking). The only other control input possible, but not necessary, is flicking the right stick to charge up to unleash a more powerful force field which lasts several seconds. The game also features a full physics engine, which is where most of the skill of the game is focuses.

Everything keeps momentum: players will keep moving for a moment after running or jumping, as will the ball. If you shoot the ball, it’s going to curve through the air instead of just going straight, so you can use this to assist in arcing it into the goal. The ball will also bounce when hitting a platform with enough force and each bounce adds to a multiplier. Shoot, and the ball bounces three times before it goes into the goal, you’ll get 15 points instead of the regular three for a long shot. The easier the shot is, the fewer points you get, so you have to really strategize on the fly whether you want to take the easy two-pointer from right outside the goal, or shoot from farther and risk missing.

This game is made for playing with others, and as such it has some unique social features that I found awesome. There is a character creator with which you can make a whole custom team to play with. These can then be shared with a QR code so anyone that has #IDARB can use them. Even though the game is rather new, there’s already been a ton of characters made, from South Park to The Goonies.

Twitter is also utilized in a way I’ve never seen used before. By tweeting @idarbwire and a match specific hashtag, spectators can “hashbomb” an ongoing game. A hashbomb is a field-wide effect which could be the lights going off, every player turning into a clown, spawn decoy balls and a ton more. This feature makes streaming or even just playing the game in your living room with a group of friends so much more communal and interactive and I feel like it may give a sneak peek into what the future of gaming might offer. 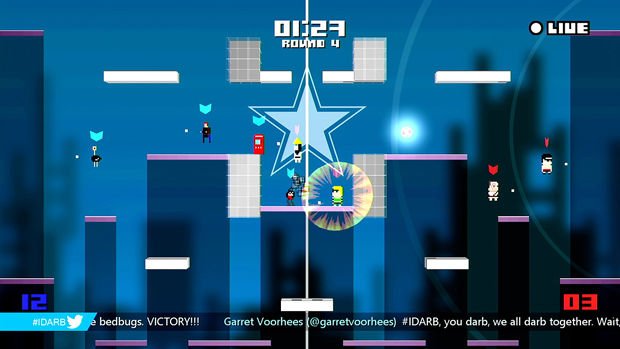 The two big problems I had with #IDARB were fairly severe. The first one was experiencing a ton of stuttering at times while playing. I’m fairly certain it wasn’t latency as my Xbox One is wired straight to the modem and a connection test read normal, and although I was using internal recording on the Xbox One, the matches I played before and after did the same thing without recording.

For something this fast-paced and precise, lag issues are a pretty big deal, and unfortunately I could not replicate it at will so I have no clue what the source is. I also didn’t like that online matchmaking would only match two Xbox Ones, not 8 players. To play with the full 8 players online, each console must have 4 local players. I still had a great time playing 1 vs. 1, but I feel like I missed out on some of the fun the game had to offer. However, support for 8 player matchmaking has been promised in a future update, so I suppose that will be a temporary gripe.

Games that are just pure, ridiculous fun are hard to come by these days. I love experiences with an involved story and poignant message, but sometimes the stresses of the day make it to where thinking about playing The Walking Dead, Dragon Age: Inquisition, or even Pokémon is exhausting.

#IDARB reminds me of the core reason why I play videogames, the honest fun and good spirit of the design with the tight competitive gameplay make this a perfect game to sit back and let the world slip away. It has its flaws here and there, and it’s not got a ton of variety, but I love it. Besides, it’s free on Xbox Live Games with Gold right now, so just grab it, ya dingus!