Serious Sam might not be a household name, but that hasn’t stopped the guy from appearing in a crazy amount of games. Developer Croteam and publisher Devolver Digital have always had a fondness for the character and that has extended to letting indie devs take him in directions never intended. This has led to games with interesting concepts, but shaky execution.

I Hate Running Backwards actually started life as another Serious Sam indie game before becoming a grand Devolver Digital crossover event. While it has cool ideas, a ton of charm and loads of guns, some design choices hold it back from its true potential. 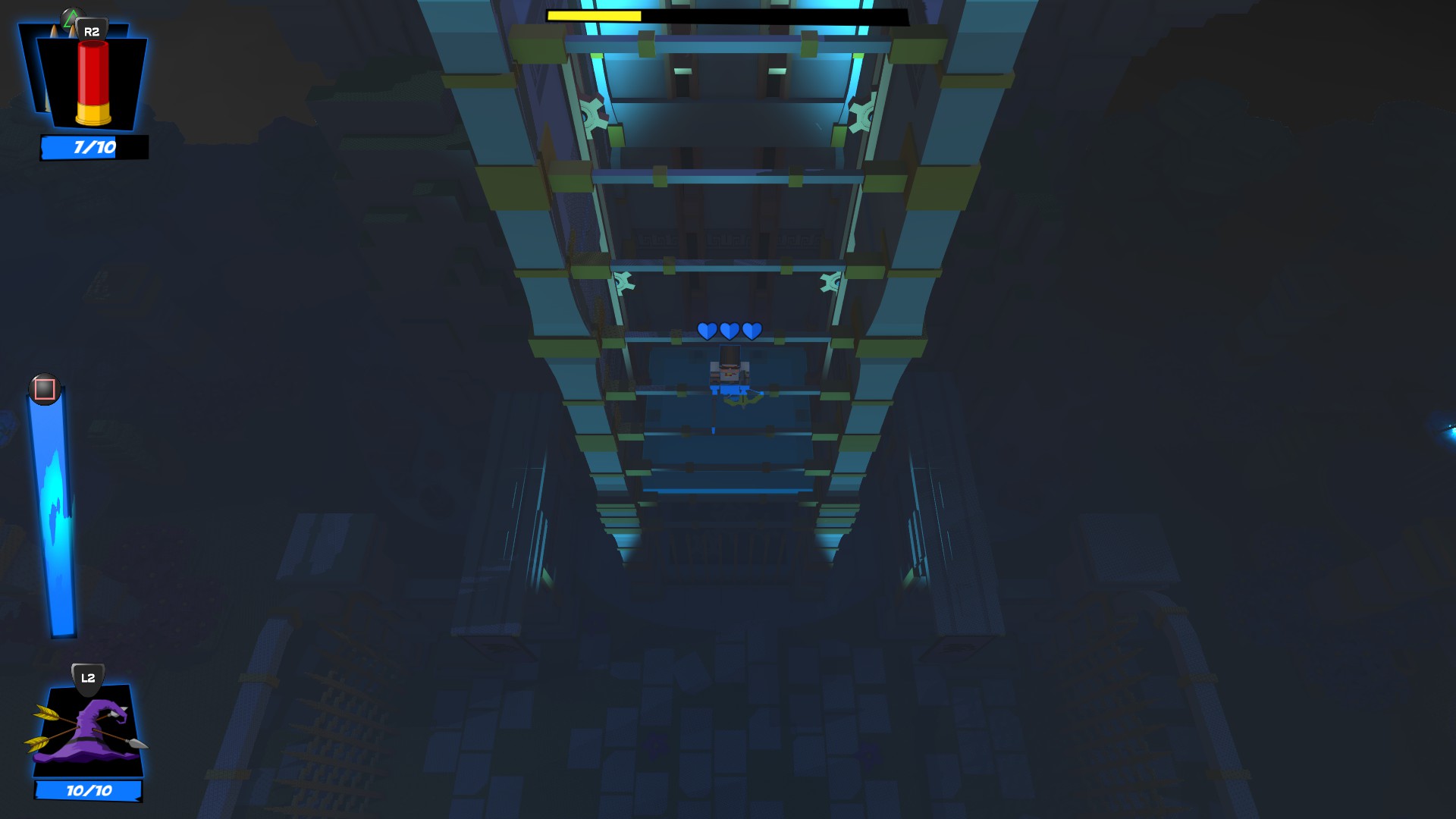 The main gimmick of I Hate Running Backwards is right in the title; you run backwards. Developer Binx Interactive has described the game as a, “Shoot ‘Em Down,” which is a reverse of the arcade classic shmup genre. You’ll control Serious Sam and a bunch of other Devolver Digital characters on a journey to defeat Ugh Zan and save the world… I guess. It’s never made explicitly clear why you’re doing anything, but that hasn’t ever stopped the Serious Sam series from being entertaining.

You’ll face a plethora of enemies from Sam’s own games, including the ridiculous, screaming, headless kamikaze guys and asshole skeleton “Kleers.” To kill these enemies, you have a melee spin attack and two weapons, which you can switch between on the fly. For Sam, this means you’ll get his Tommy gun and shotgun, while someone like Shadow Warrior’s Lo Wang will get his SMG and double barrel. Running out of ammo on either gun will default you to a slow pistol, though that has unlimited ammo.

Using just those few weapons could work, but the game ups the ante and includes a bunch of insane secondary items. These take the form of a refrigerator that can freeze foes, a drone that will fly overhead and shoot enemies and even a donkey that will fart on the opposition. It showcases a lot of personality and can make for some truly wild times, with bullets ricocheting all over the place and the environment getting destroyed by your firepower.

Along with those weapons, you’ll also find power-ups that grant you temporary abilities. The best is clearly the shield (which protects you from damage), but there is also an infinite ammo power-up that will let you blast away with reckless abandon for roughly 10 seconds. These all come in handy, with none of them feeling like a total waste. Finally, you’ll build up a meter from killing enemies that will unleash a special attack. These are character specific and have some cool effects, like the Disco Lady transforming into a giant disco ball and rolling over enemies.

This is all accomplished through a simple control interface. I Hate Running Backwards utilizes both triggers, Y (Triangle), A (X) and X (Square). The game isn’t a twin-stick shooter, so you’ll only need to worry about your line-of-fire being directly in front of your character. This simplicity is greatly appreciated because the action can become very chaotic in short order. Thankfully, you can bring a buddy along for the ride.

Where the game starts to falter is with the environment. While everything is themed around Serious Sam and uses the same Egyptian style of his games, I Hate Running Backwards is a procedurally generated game. This means levels will be randomly generated each run and dying will reset you back to square one. Every now and then, the game will be broken up by a mini-game (of sorts) that will see you driving a car, shooting a turret or flying a helicopter. It doesn’t happen often, so it feels out of place when it does occur. 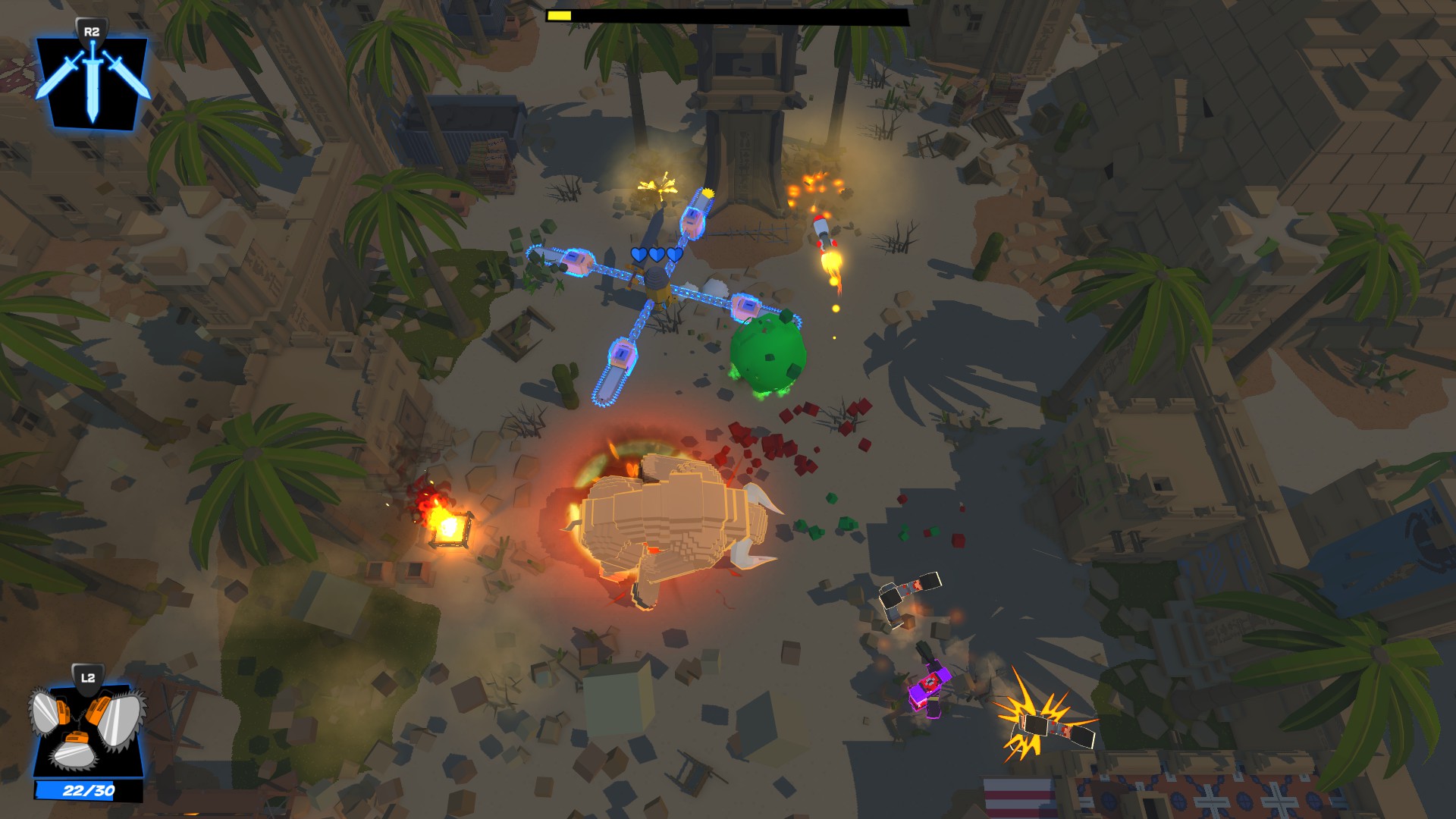 Another issue is that the amount of enemies on-screen wildly fluctuates between runs. The first area is typically simple, but can sometimes be swarmed with enemies and cause early (and frequent) deaths. This just leads to your run feeling useless, since you aren’t working towards any progressive unlocks. Some secondary weapons will become available after performing certain actions (which the game leaves vague), but they don’t dramatically alter the experience.

The only real unlocks are the various characters you can play as. You’ll start with three, but begin to collect different characters by hitting some of the game’s achievements. The big problem is that you’ll never know which achievement unlocks what character. Lo Wang will be a given (since he unlocks for dying the first time), but I still haven’t figured out how to get the protagonist from Hotline Miami or the Bullet, from Enter the Gungeon, which I saw in the preview build from PAX. The menu doesn’t clue you in and even the achievement descriptions fail to shed light on what you need to do.

The biggest problem is that the general pace of the game feels very slow. As chaotic as the game can become, the general scrolling speed is pretty lethargic. This isn’t so much running backwards as it is briskly walking. While this is meant to give you time to actually see enemies coming, sometimes they move ridiculously fast, while your character does not. Even though some character specific attributes include faster speed, it never feels like enough compensation for the game’s leisurely camera. 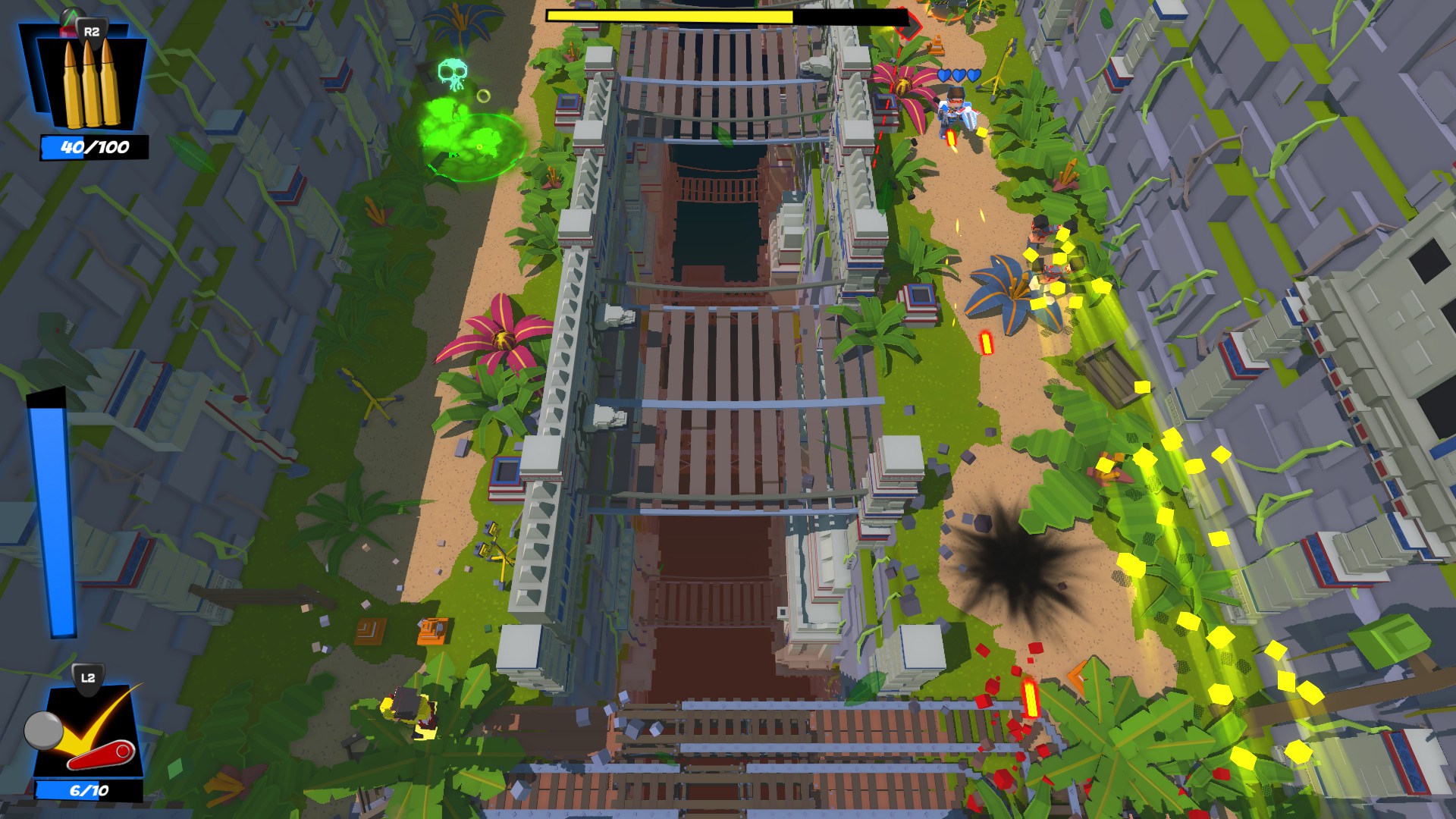 The general balance of the game’s difficulty is just very poor. Because of the procedural generation, sometimes you’ll get barely any ammo or special weapons and you’ll just get trounced by your enemies. The bosses demand you practice skills that aren’t used elsewhere and reaching them can sometimes take longer because the levels are generated with mini-games in the middle. It also sucks when the camera is stuck behind an environmental detail and you get pegged with a rocket, dying in the process.

Co-op is supposed to mitigate some of the challenge, since you can respawn after 30 seconds, but then the enemy count seemingly gets doubled and bosses require more damage. You’re also now fighting with your friend for ammo, which means one of you is going to be stuck with the crappy starter pistol and unable to really provide any support. Maybe it was due to my friend lacking knowledge of the game, but I had a much easier time without him.

The real kicker, though, is that there isn’t a reliable way to jump past beaten bosses. When you defeat a boss, you’ll unlock a shortcut that skips each area, allowing you to quickly get back to your place of death. Every time you quit the game, those shortcuts reset. I felt great after finishing the third boss for the first time and quitting for the night. Imagine my disappointment when I returned the next day and couldn’t just continue on. It basically killed my momentum and I dreaded having to repeat a bunch of content again. 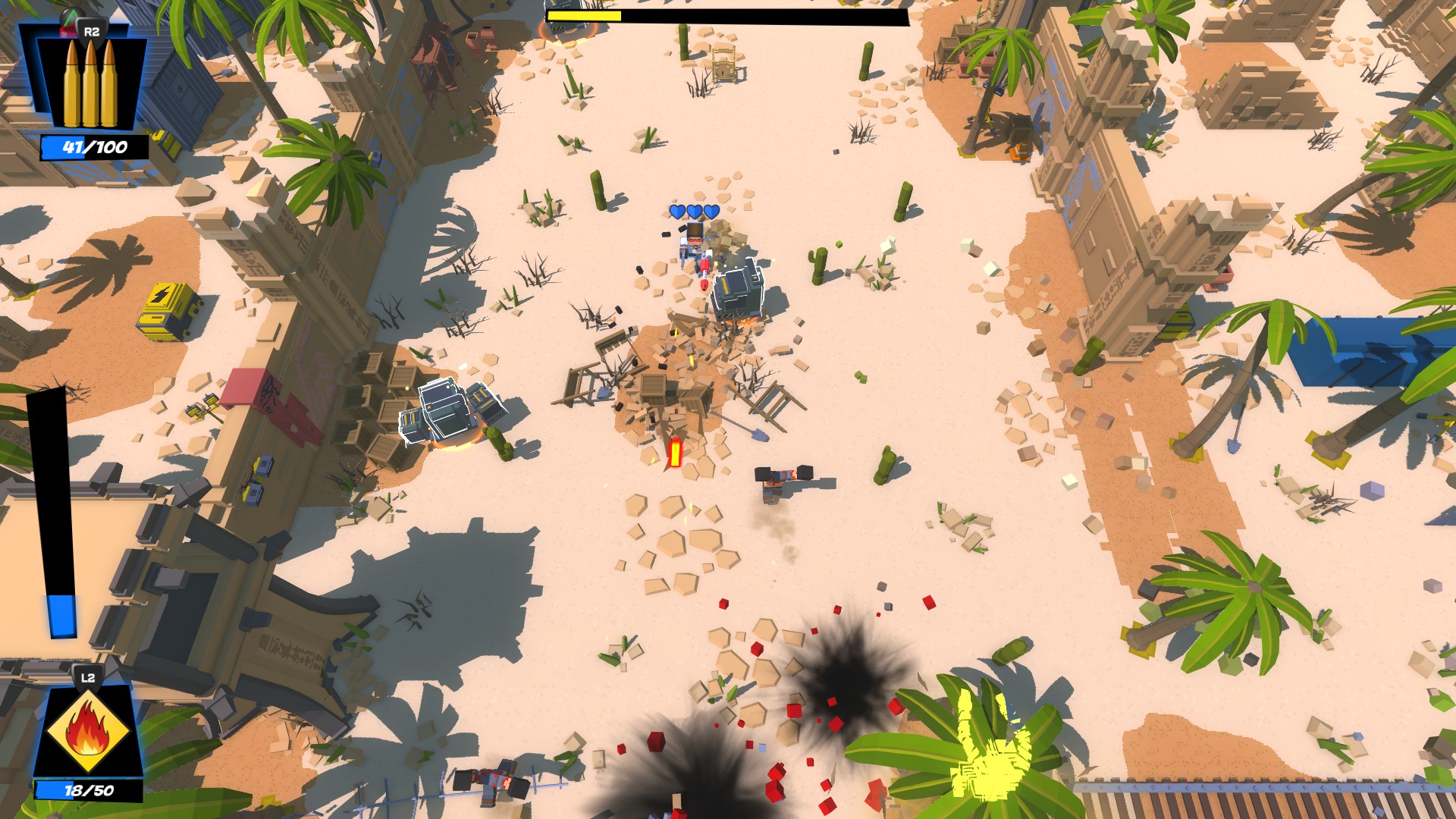 While I pushed on, for a bit, I could only ever get to the fifth boss (of six) and that wasn’t even consistent. The game would keep generating wildly different levels in the fifth area and I couldn’t get into a rhythm to proceed. I hate not finishing a game for review, but I Hate Running Backwards simply beat the drive out of me.

The game has potential and is loaded with a bunch of memorable characters, but it has general design flaws that are tough to overlook. I haven’t even mentioned how there are daily runs, but playing an even harder version of an already difficult game doesn’t really hold much value for me. Maybe if you like cutting your teeth on absurdly difficult shooters, this will be for you. Personally, I want to like this game, but I Hate Running Backwards just wore out its welcome far too early.

[Update: Developer Binx Interactive released a patch that fixes a lot of the issues I had with the game. Be sure to check out my post detailing them here. – Peter]