Last days in a dying world

The post-apocalypse is the new WWII — the overused, thoroughly played-out, exhausted setting that too many games and movies muck around in. We’ve seen it all: zombies, mutants, raiders, and hell, even dinosaurs. It’s hard to make the end of the world interesting again. But, Hyper Light Drifter manages to find a way.

Set on just the wrong side of an apocalyptic event, it brings beauty, style, and mood to the end of the world. A longing vision of the end times through the lens of idealized 8- and 16-bit games. A kind of heartbreaking sting that is at once nostalgic and completely new. The end of Hyper Light Drifter‘s world is more than interesting, it’s downright captivating. 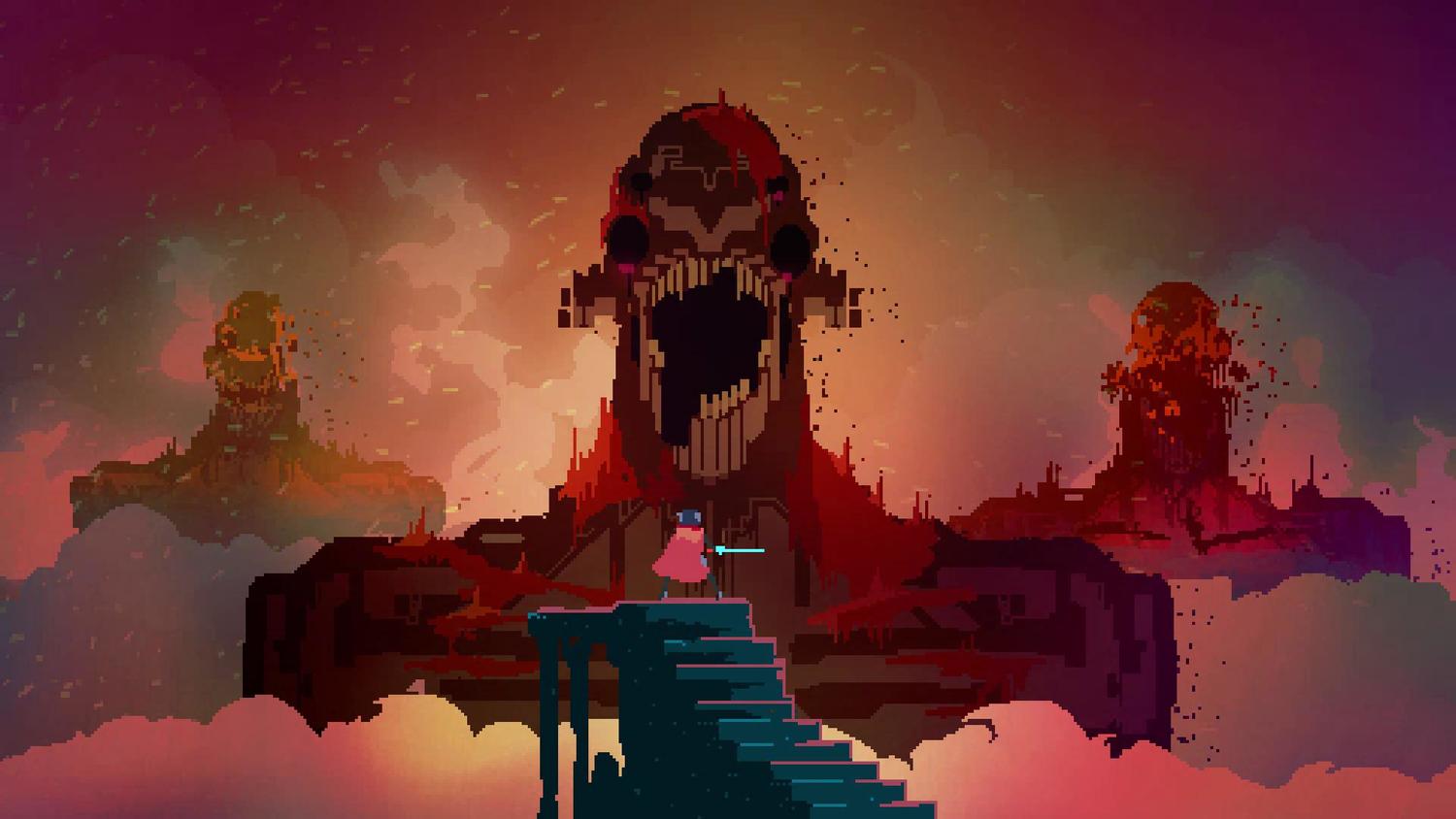 Hyper Light Drifter sets the player off to explore a dying world without much direction. After waking up in a quaint hamlet set square in the center of the map, a tool-tip may nudge you towards the north, but there isn’t any reason you can’t go west, or east, or south, or just hang out in the village and marvel at the character and design of its shopkeeps. You’re not expected to know where to go; the game delights in that uncertainty.

From the macro-level of not really understanding the critical path, or even your overall goal, to the micro-level of discreet portions of stage design, exploration is key. Hidden paths, tricky routes, and invisible platforms abound, and it’s best to embrace the wandering mentality early. Like some cheap Robert Frost knock-off, you’ll often be presented with two, three, four paths (and an invisible bridge) at once, and sorry, but you could not travel them all. Not right away anyway. You’ll be back eventually. There is no penalty for backtracking, and getting around the world is easy with centrally located fast-travel points in every area.

The backtracking never feels like a burden because this is a game to take your time with — to explore and really soak in the splendor and beauty of its design. The visual presentation of Hyper Light Drifter is second to none.

Honestly, you can’t take a bad screenshot of this game. Every single frame is a painting. The vibrant colors, intricate anarcho-future design of the settings, and super-detailed character spites grab the eyeballs and never let go. Hyper Light Drifter revels in its style, taking frequent breaks from the action just to bask in a glorious vista, some sad tableaux of an ancient broken robot in a forest, or a disturbing massacre of a primitive tribe. Even the menus and shops ooze with style. Every single image in the game is positively gorgeous.

The soundtrack from Disasterpeace is every bit a match for the impressive visuals. Much of it is moody and atmospheric, with sad stray notes and the occasional punch of percussion punctuating ominous synth humming. It’s all very isolating and spooky, the kind of music fit for wandering around a dead person’s house (which I imagine is the intended effect, given the wrecked nature of Hyper Light Drifter‘s world).

It all blends together to create one hell of a mood. Which is good, because that mood does most of the narrative heavy lifting. 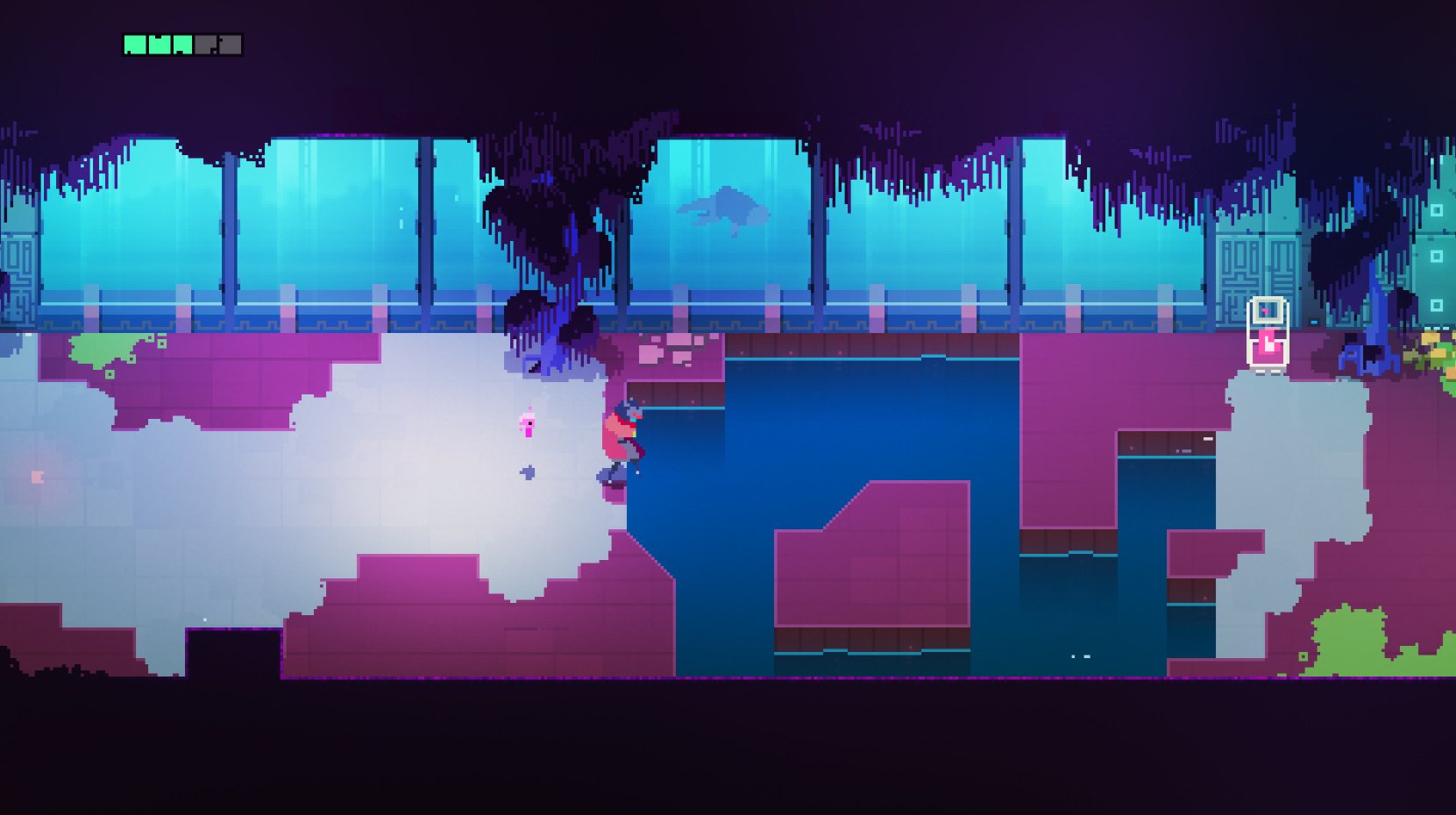 No words are exchanged in Hyper Light Drifter. There are short vignettes, troubling visions, and one-sided, pictographic conversations from the few friendly faces in the world, but no words. Everything is impressionistic and dreamy, expecting the player to fill in the gaps and supply their own ideas. World details and astoundingly beautiful pixel art tell small localized stories here and there, but the overarching plot is shrouded in mystery. What happened to the world? Why are you following this Anubis look-alike dog? Who is the man is the mask? Is he you?

By the time I saw the credits roll (roughly seven hours of game time), I had more questions than answers. Maybe they’re in there somewhere, tucked away in the many secrets I failed to unlock, or the New Game+ mode I’ve yet to tackle. I can’t be sure, but I doubt it. Hyper Light Drifter doesn’t seem particularly interested in answering those questions, it just wants them to occupy a spot in your brain; to stake out a little encampment in your mind, and in turn leave a part of yourself in its melancholic neon world. This is an arrangement I am perfectly happy with. 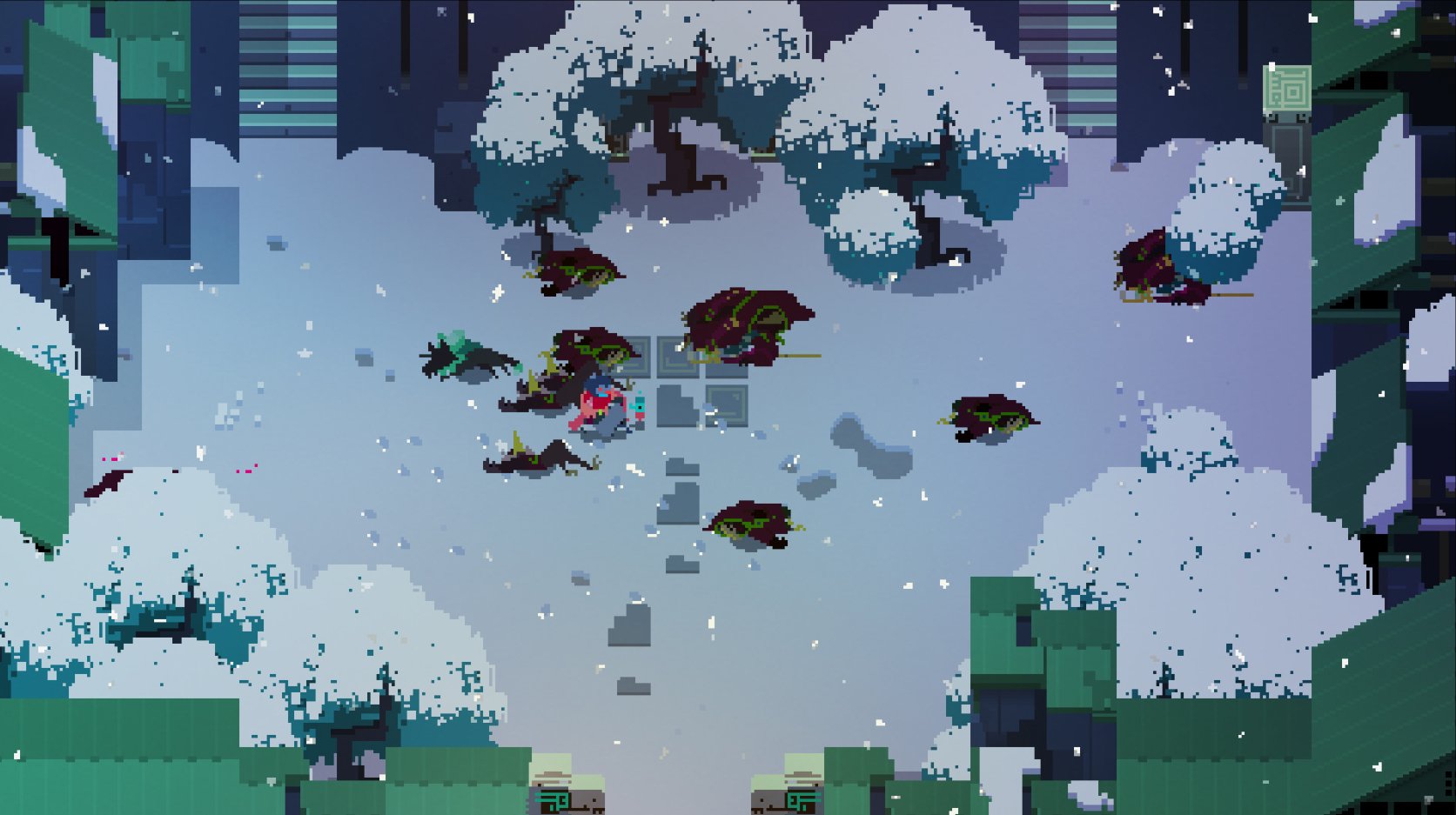 The world may be dying, but that doesn’t mean it isn’t dangerous. Combat in Hyper Light Drifter is fast, fun, and occasionally frustrating. I often found myself alternating between two extremes. Sometimes, I would clear out a room with a showy display of expert swordsmanship and dodge-dashing so beautiful it could be fit for a ballet. Other times, I’d make an embarrassment of myself, with panic-stricken flailing and lots of luck keeping me just this side of the grave. It all depends on your skill and flow. Don’t take that first hit and things usually go fine. But as soon as you start getting knocked around, the situation rapidly deteriorates.

Fighting involves the careful management of skills and abilities. The three-hit sword combo is (of course) the bread-and-butter of your arsenal, but knowing when to use your firearms (and which one to use, and when to quickly blind fire in a general direction, and when to sit for a second and aim, and so on) is crucial to soften up big enemies and pick off snipers.

The dash-dodge move must become second nature. Knowing its exact length and growing comfortable with aiming it anywhere is a skill that will serve you well. Bullets, bombs, ninja stars, and rabid mutant hounds are not your only worry — disappearing ground and gaps in the floor provide just as much as hazard as any foe — and it is important to be able to reposition yourself at a second’s notice. 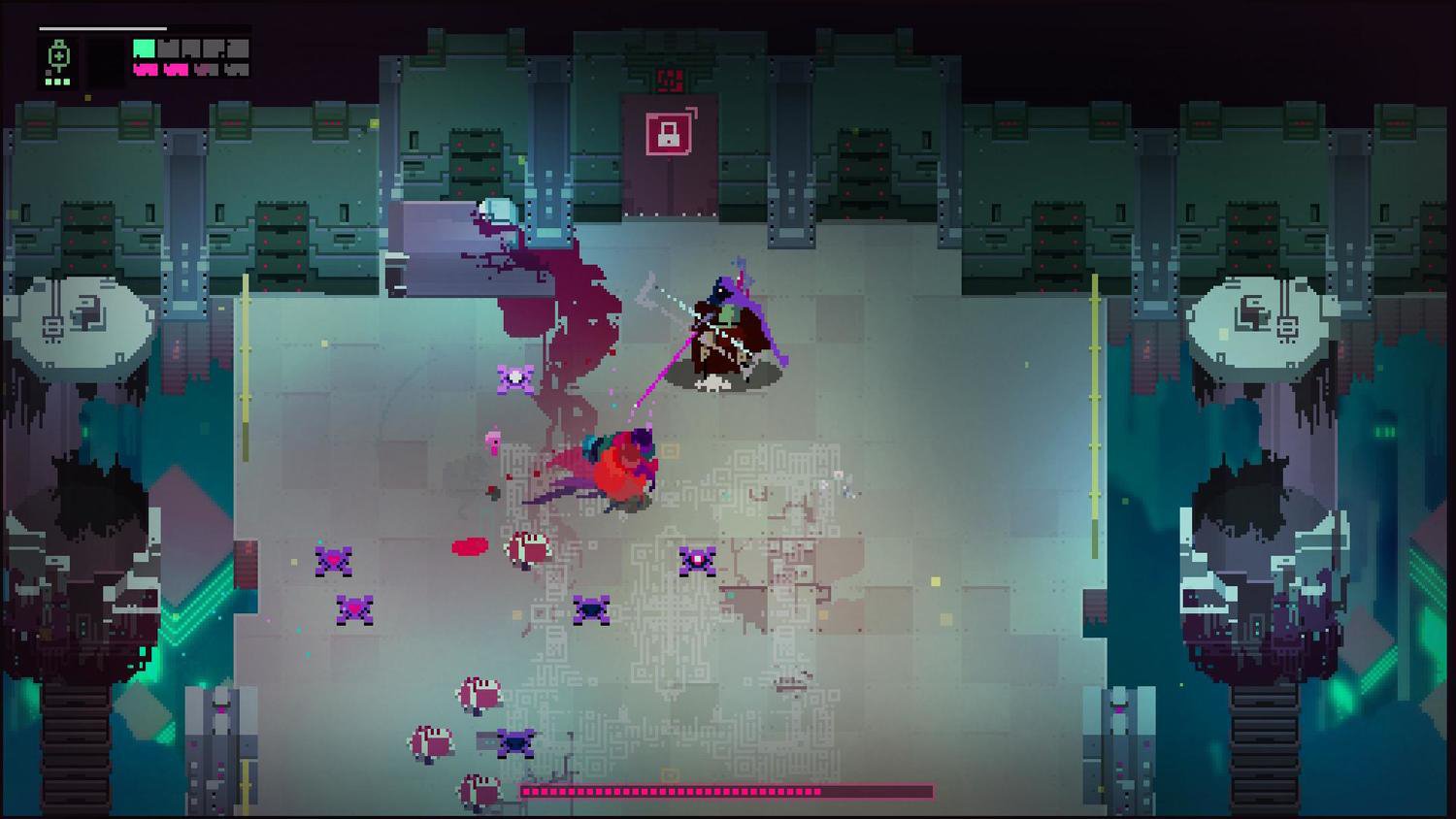 The ability to sock away health packs and heal on command may seem forgiving, but when contending with waves of manic enemies leaping on you from all sides, just creating the space and time needed to shove a syringe in your heart can be an accomplishment all on its own. Having a full supply of health packs at the ready is never a guarantee of victory when death can happen so quickly.

Thankfully, there are items and power-ups to collect, but don’t get too excited. Each upgrade is purchasable in the hub town and requires golden credit chits to unlock. Each chit is acquired by painstakingly assembling them out of four smaller chits found in the wild (think heart containers in Zelda). Even with a diligent eye, you won’t find enough to get every upgrade you want.

Upgrades run the gamut from the boring but undeniably useful (extra health pack storage in your inventory) to heavily skill-based tools that you need to hone before seeing a benefit. Chain-dashing is a privilege, not a right. Even after you unlock it, you’ll want to practice the exact timing necessary to string together multiple dashes if you want to get the most out of it. The bullet-reflecting sword upgrade is handy, but you still need to be on point with your timing if you don’t want to eat them yourself. 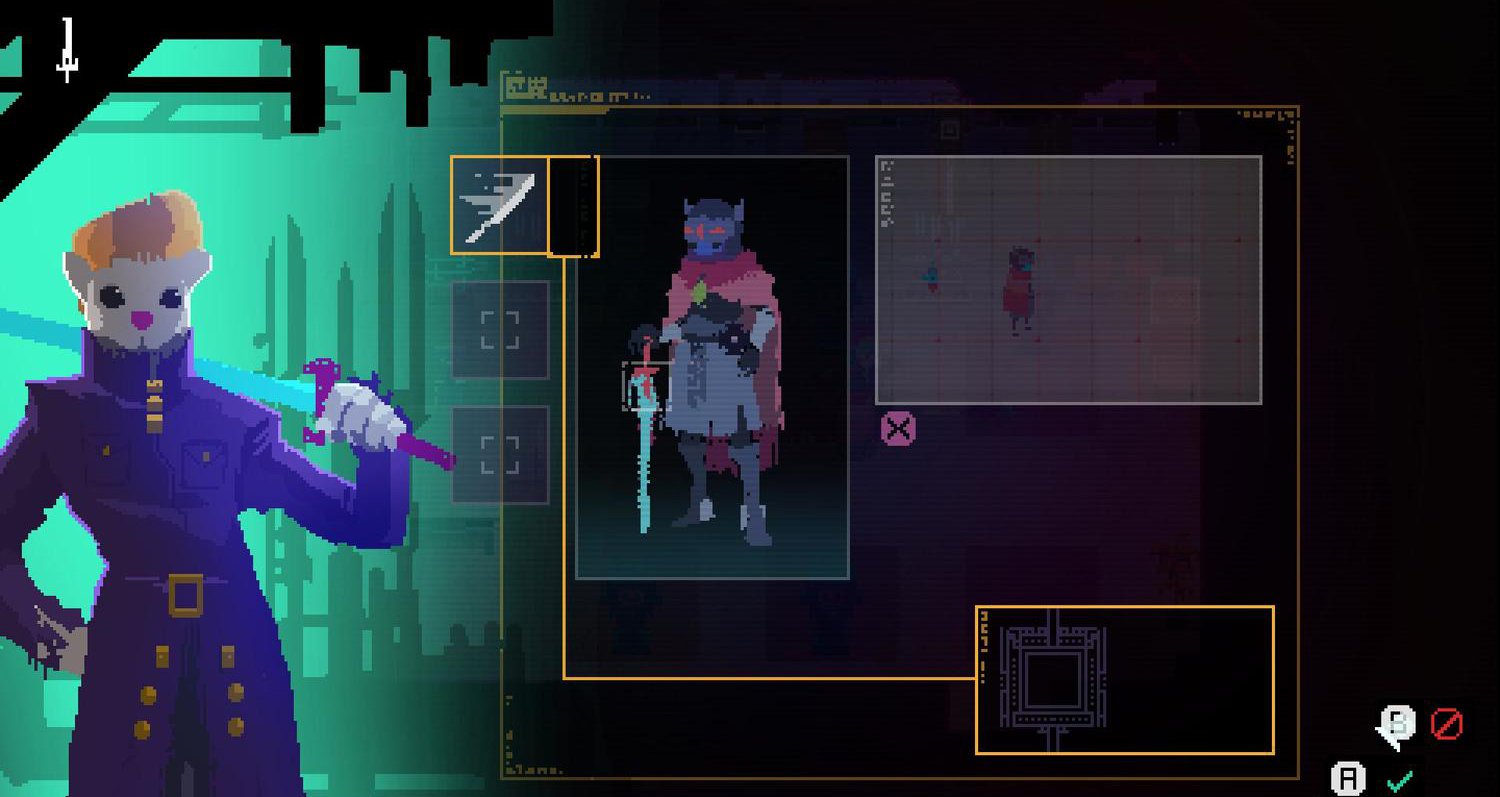 This is an old-school game. Dying several times in a row won’t unlock a Chicken Hat or easy mode option. If you’re stuck against a boss (likely to happen, since the bosses are waking nightmares), don’t bother waiting on a miracle to come, or for some secret technique or new item to allow you to turn the tables and suddenly make it a cakewalk. No. In Hyper Light Drifter, you have to eat your fucking broccoli and ask for seconds. You have to pile on the muscle, learn the patterns, and take your lumps. As it was, so it is.

The sternness of the game and its refusal to compromise on its difficulty may be a stumbling block to some. Even the great beast Dark Souls, sitting on its throne of defeated players and broken controllers, often gave players an out: a way to cheese the hardest sections — slinging arrows from an unreachable nook, iron skin and lightning weapons, a hornet ring and single lucky parry to take down the end boss. If there is any cheese in Hyper Light Drifter, I didn’t find it. 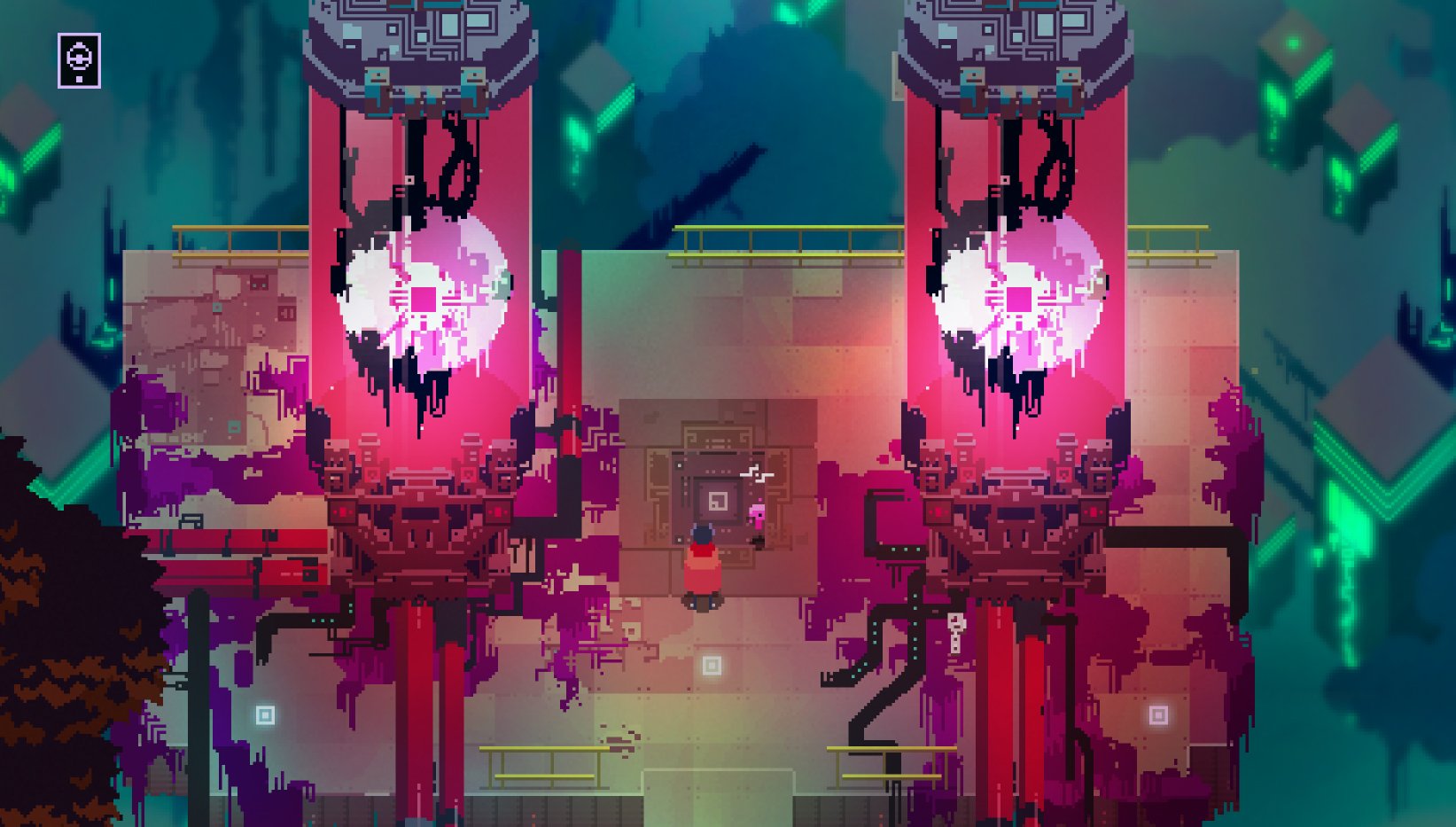 But that’s not me. Mood and atmosphere can carry me a long way, and I adored every second I spent in Hyper Light Drifter‘s world. The combat and movement often left me slack-jawed and giddy, a perfect homage to the ’90s RPGs that obviously inspired Heart Machine, while still feeling completely fresh and constantly surprising.

I don’t need all the answers if the questions are interesting enough. And if Hyper Light Drifter is anything, it’s interesting.