Dying ain’t much of a living

Remember when Punks were the bad guys in everything? When comics, movies, TV shows, and, in particular, arcade games of the ’80s and early ’90s all considered punks to be the street-walking vilification of society? From Class of 1984, to Final Fight, to Death Wish 3, nothing on Earth was presented more dangerous by middle-class media than a fella with spiked hair, a safety pin through his nose, and cider in his hand.

Then grunge came along – like a lank-haired A-bomb – and killed off the media scaremongering for good, replacing the bondage jackets and Siouxsie Sioux makeup with flannel shirts and massive depression. It was probably for the better, to be honest. Can you even imagine a world where we didn’t get The Melvins or L7?

But it appears the Evil Punks have been making a comeback, courtesy of popular retro brands such as Mad Max, Streets of Rage, Dredd, and this new offering from Swedish outfit Easy Trigger Games. Gleefully embracing a media age where the streets were inhospitable, the cops ineffectual, and the vigilante was king, Huntdown takes retro-futureverse visions of the 1980s and brings them, guns blazing, into the actual futureverse of 2020. Paul Verhoeven would be so proud. 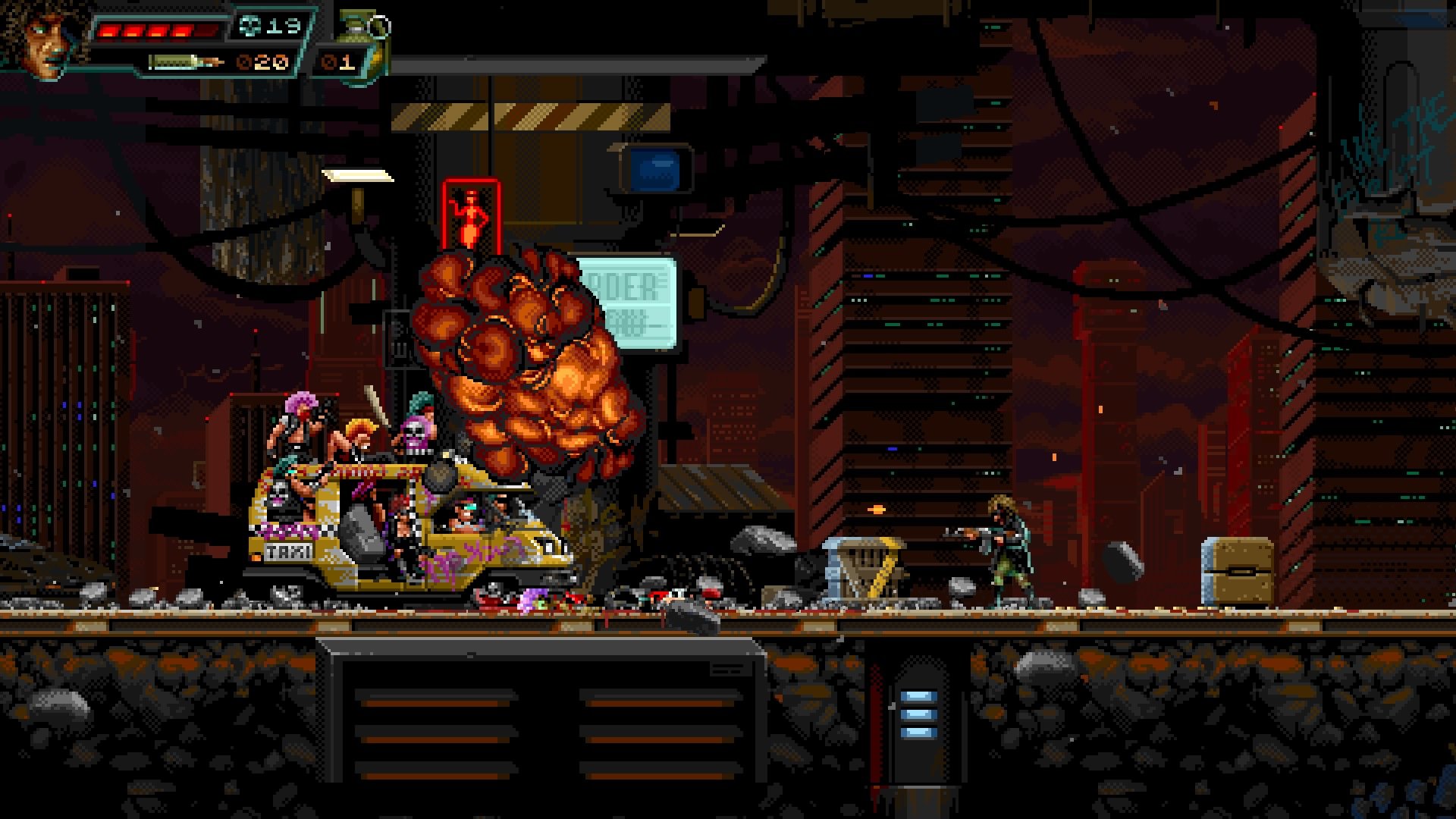 Like almost every element of Easy Trigger’s Huntdown, the plot is steeped in the trappings of ’80s cyberpunk. Set in the late 20th century, the aftermath of World War III has created a distinct class line in what few cities remain standing. Governments have been replaced by ruthless corporations, who provide jobs and protection for those willing to walk in line. The only other option is to seek refuge in one of the cities’ violent, marauding gangs, surviving by any means necessary, and usually ending up face down in your own chalk outline.

But there are those that walk a line between these two equally unappealing lifestyles. These people pledge no allegiance to any one corporation, while simultaneously being an enemy to every gang member in existence. They are the Bounty Hunters, hired guns commissioned by the wealthy to take down any criminal element threatening the bottom line. Truly, in Huntdown‘s universe, it’s an all-heel scenario. It’s just a matter of perspective.

In Huntdown, one or two players pick from a trio of hardened hunters, tasked by the mysterious Shimata Corp. to bring down the four gangs who have the strongest footholds in the city. Our zero heroes are the world-weary ex-cop John Sawyer, nihilistic mercenary Anna Conda, and refurbished cyborg Mow Man. On this night, these three merciless killers will face down four of the city’s most powerful gangs, or die trying. It’s a living.

Huntdown is a run ‘n’ gun shooter that captures the classic arcade action of games such as Contra, Midnight Resistance, and, perhaps most distinctively, Elevator Action Returns. Players blast their way through each gang’s turf, mowing down hundreds of unique enemies with a huge array of military-grade hardware, from Uzis and shotguns to flamethrowers, laser rifles, and bazookas, with some gnarly melee weapons chucked in for those close encounters. At the end of each stage awaits a face off against one of the gang’s lieutenants, en route to a showdown with each mob’s big boss. Clear the scum from the district, then hop back in your sultry wheels and await your next assignment.

What sets Huntdown apart from its contemporaries, and I cannot stress this enough, is its masterful sculpturing of explicit and outrageous Hollywood violence. Lightning-paced from first second to last, and punctuated with satisfying gunplay, a slick cover system, and devastating weaponry. Huntdown takes the classic run ‘n’ gun action that has come before and infuses it with breathless new energy, fine-tuned to modern gaming standards, exuding a “controlled chaos” that permeates every single moment.

Huntdown achieves this wanton sensation by displaying excellence at almost every turn. Control is intuitive and razor-sharp. Explosive effects and ballistic physics are visually spectacular and immensely gratifying, while every boss fight is a uniquely designed set-piece. Whether battling teenage samurai sisters, mech-riding arms dealers, a high class model rocking a hologram projector, or a sky-high battle above rush-hour traffic, Huntdown boasts smart and creative firefights. And while these bosses are undeniably challenging – sometimes very difficult – they rarely feel unfair, only necessitating the use of smarter tactics, faster reactions or, when all else fails, bigger guns. 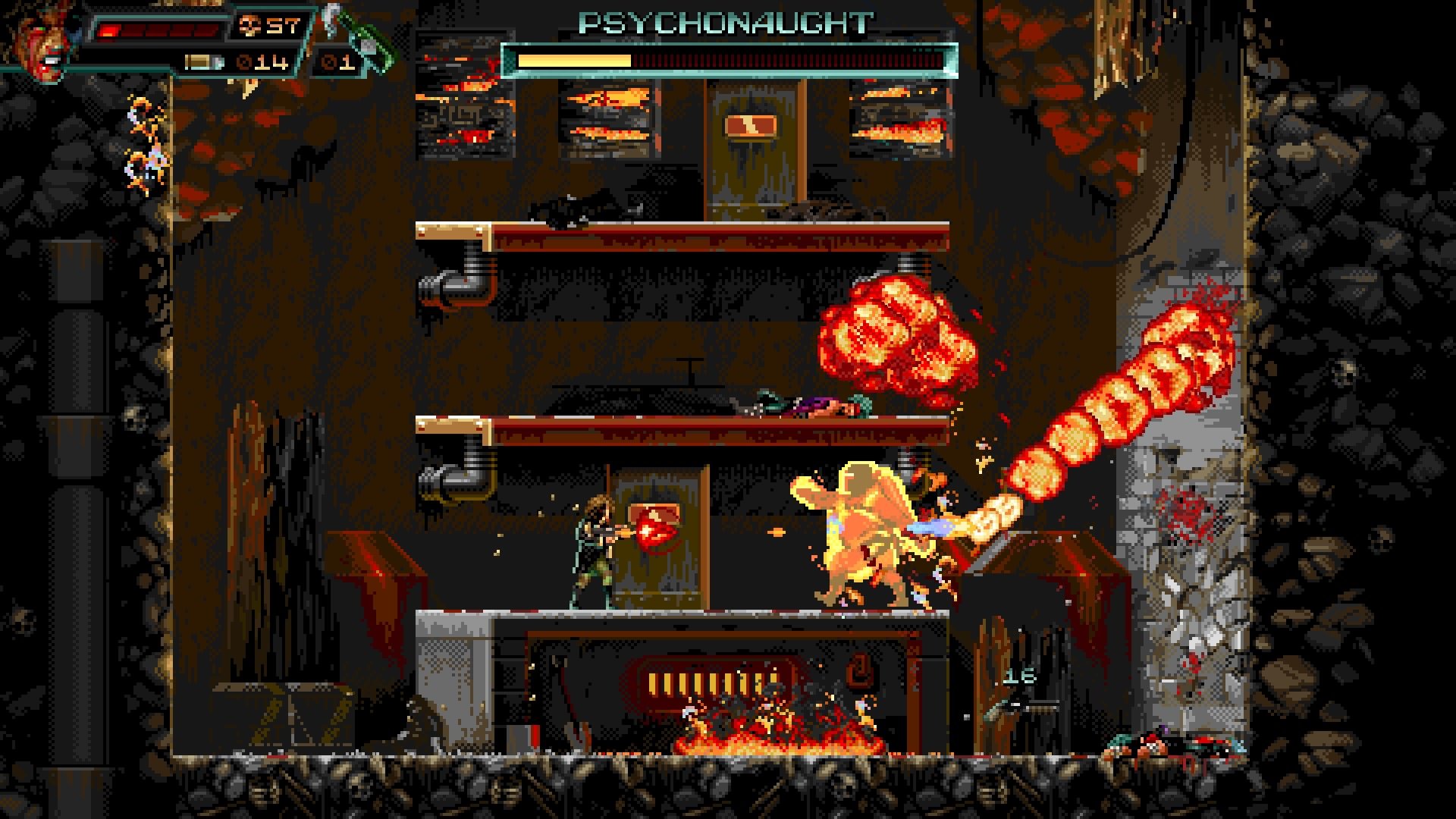 All of this rewarding action is realised in Huntdown‘s gorgeous 16-bit aesthetic, with every sprite, vehicle, and building hand-drawn pixel-by-pixel. The cities in Huntdown ooze personality and are bursting with life. Bar brawls break out, windows shatter, NPCs flee in terror, neon signs sputter, subway trains rush by, a hockey arena becomes holy ground, a movie theater a battlefield, all while Anna Conda and crew redecorate the scenery with the innards of the cut-throat villains foolish enough to oppose them.

To bring the occupants of these miserable locales to life, Huntdown is packed with balls-to-the-wall voice-acting – a cacophony of guttural insults, shouts, and blood-curdling screams from both the hunters and their prey. Aside from the mission briefs (in which the actor appears to be struggling with inflection), Huntdown‘s cast turns it to 11, the kind of performance where you leave everything in the recording booth, and the experience is better for it. I’ve not played many games where a boss takes a phone call for the duration of his fight, or a biker’s Valley Girl sweetheart cheers him on incessantly, but Huntdown affords each of its tiny pixelated figures larger-than-life character.

Huntdown features one of the very best scores I’ve heard this year. An eclectic blend reminiscent of John Carpenter, Vangelis, and The Running Man soundtrack, Huntdown‘s OST complements the overall atmosphere and the on-screen action. More so, it is a vital part of making the chaos compelling. From its hair-bristling intro theme, to its smooth synth overtures and drum-pounding beats, Huntdown‘s music outfits the city with an evolving sound, as specifically attuned to each district as the gimmicked gang lurking within its doorways.

With its highly detailed sprites and animations, teeth-clenching challenge, energising score, and boisterous attitude, Huntdown, like the pulp fiction genres it so obviously apes, is an absolute assault on the senses. An issue of 2000 A.D. brought to life, with the volume set on max and the knob ripped off. Wear headphones and play it loud, I’m begging ya. 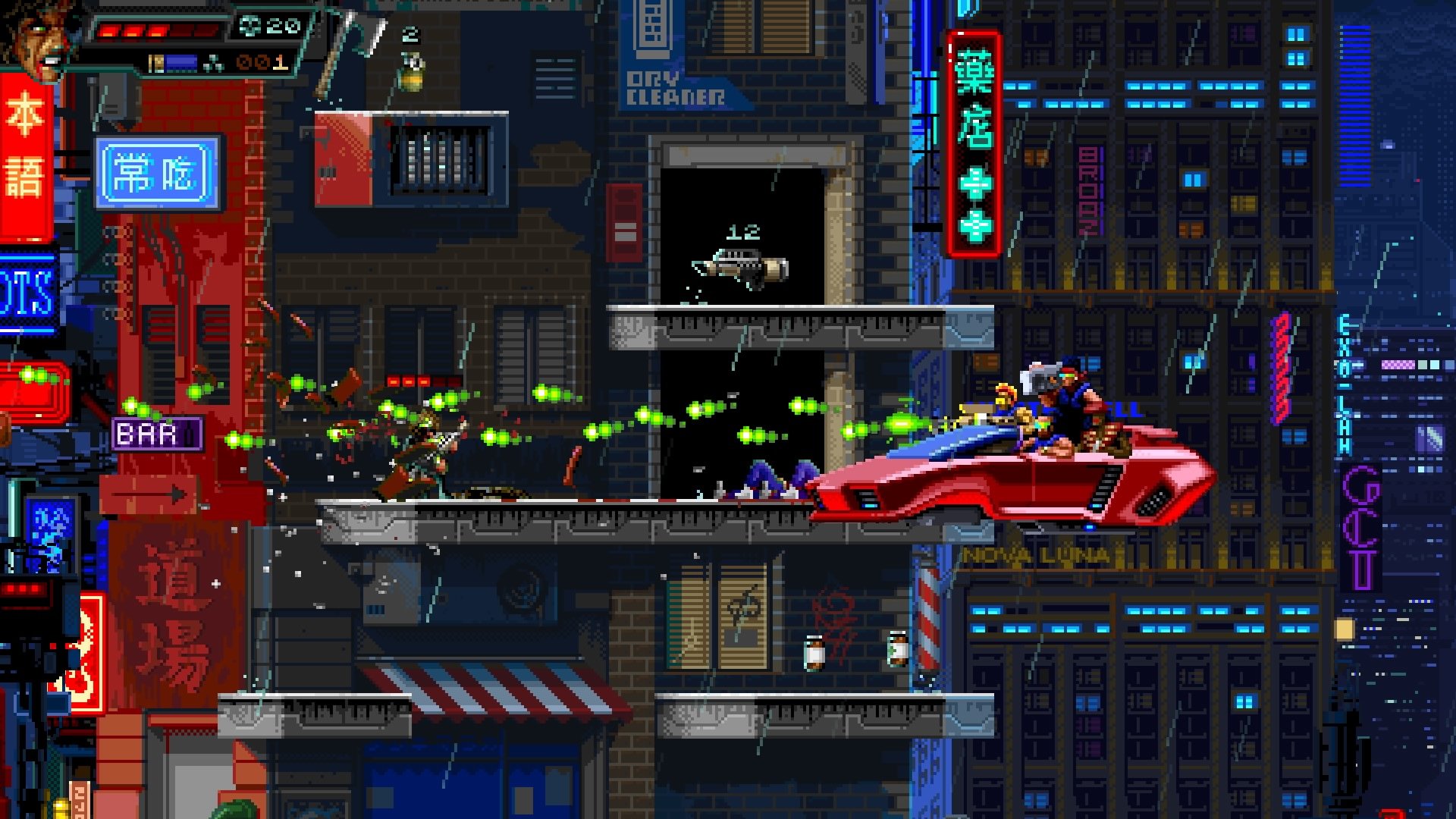 Huntdown‘s midnight run is an admittedly short but challenging one, with three characters, four difficulty levels, and a small selection of side-objectives to be completed. These tasks are exactly the same for each area, which is a little disappointing. I’ll also admit that as much as I allowed Huntdown‘s sleazy aesthetic to wash over me, my delicate sensibilities found a couple of its character stereotypes a tad questionable. Finally, the in-game text could also use another quick proof-read for spelling and punctuation errors… I can relate.

It’s clear Easy Trigger has hopes Huntdown will be a hit on the speedrunning/streaming circuit – given its built-in timer, infinite lives, and strategic boss battles – but there’s plenty of entertainment on offer for those who just want a few hours of old fashioned arcade mayhem. Unfortunately, Huntdown only supports local co-op – there is no online multiplayer – but I had a riotous time playing on my lonesome and, given its budget price tag, these few gripes are easily forgiven.

Easy Trigger has sculptured its love letter to ’80s grindhouse to hit players like a sledgehammer, bombarding them with amazing old-school visuals, fantastic sound, great music, and just enough retro-chic to pay homage to its source material, without getting too Family Guy about it. A lot of modern games claim to provide “retro arcade action,” but Huntdown delivers the goods, while simultaneously punching you in the mouth and telling mom to fuck off.

Huntdown is a nihilistic, loud, explosive, even obnoxious arcade shooter. But deep within its acid comic style and vulgar tone lies a superb, meticulously crafted action experience, packed with creative and addictive carnage, at a breakneck pace, for an agreeable price. Heed the warning: Do Not Sleep on Huntdown. It’s an absolute blast.