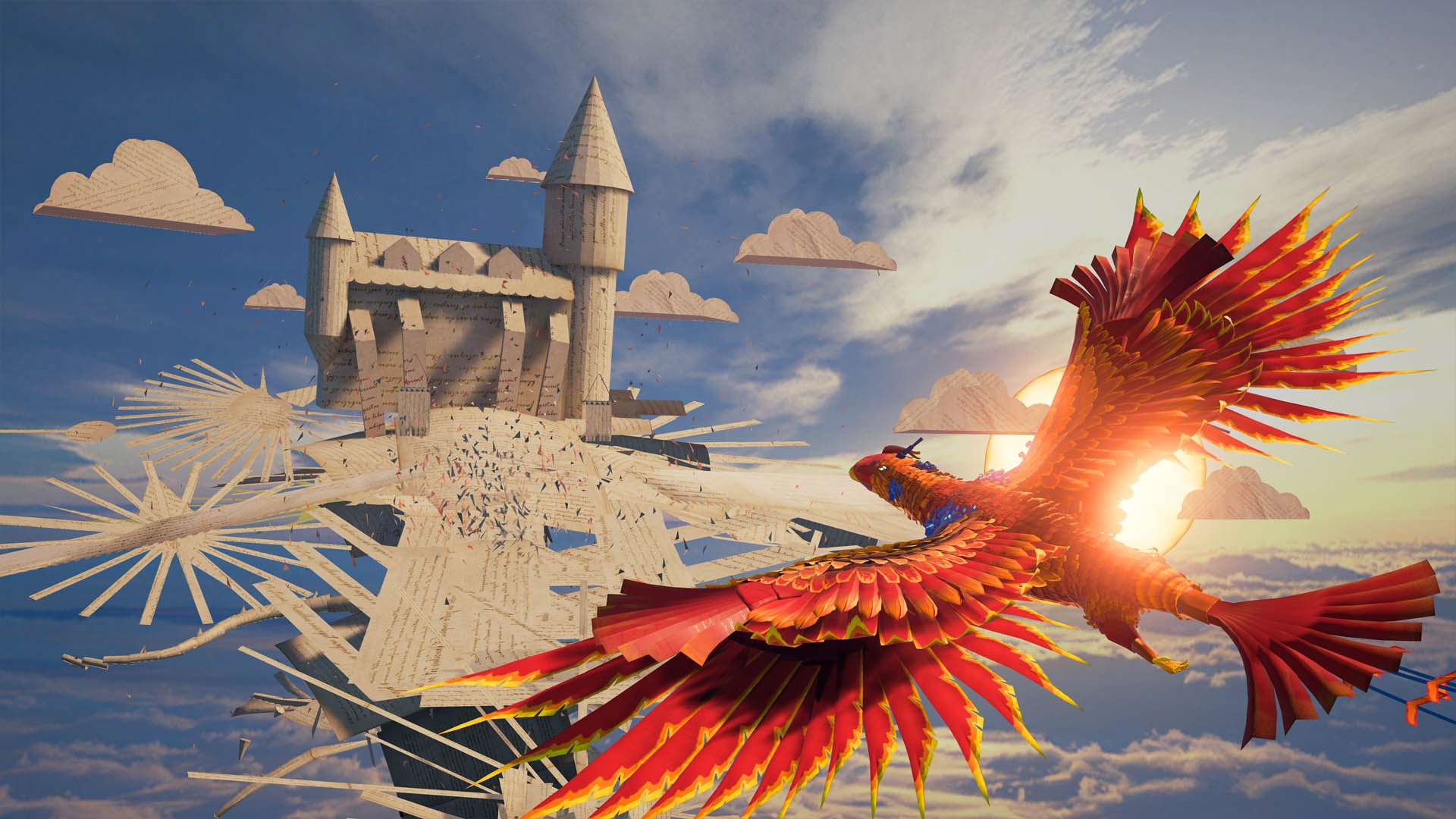 Love lift us up where we belong

Flying, much like driving, is a captivating fit for virtual reality. While there have been plenty of games that opt to take us on a trip into the far-flung future, placing us inside a cockpit and sending us off into crazy and sometimes disorienting spaceship battles, How We Soar goes for a much slower, calmer pace.

Unlike Ubisoft’s Eagle Flight, another recent VR game about flying, this one sits you atop a sort of piñata phoenix, sandwiched between its huge flapping wings. How We Soar is the story of a writer struggling not only to craft a great story and prove his worth, but to keep a strained relationship going. 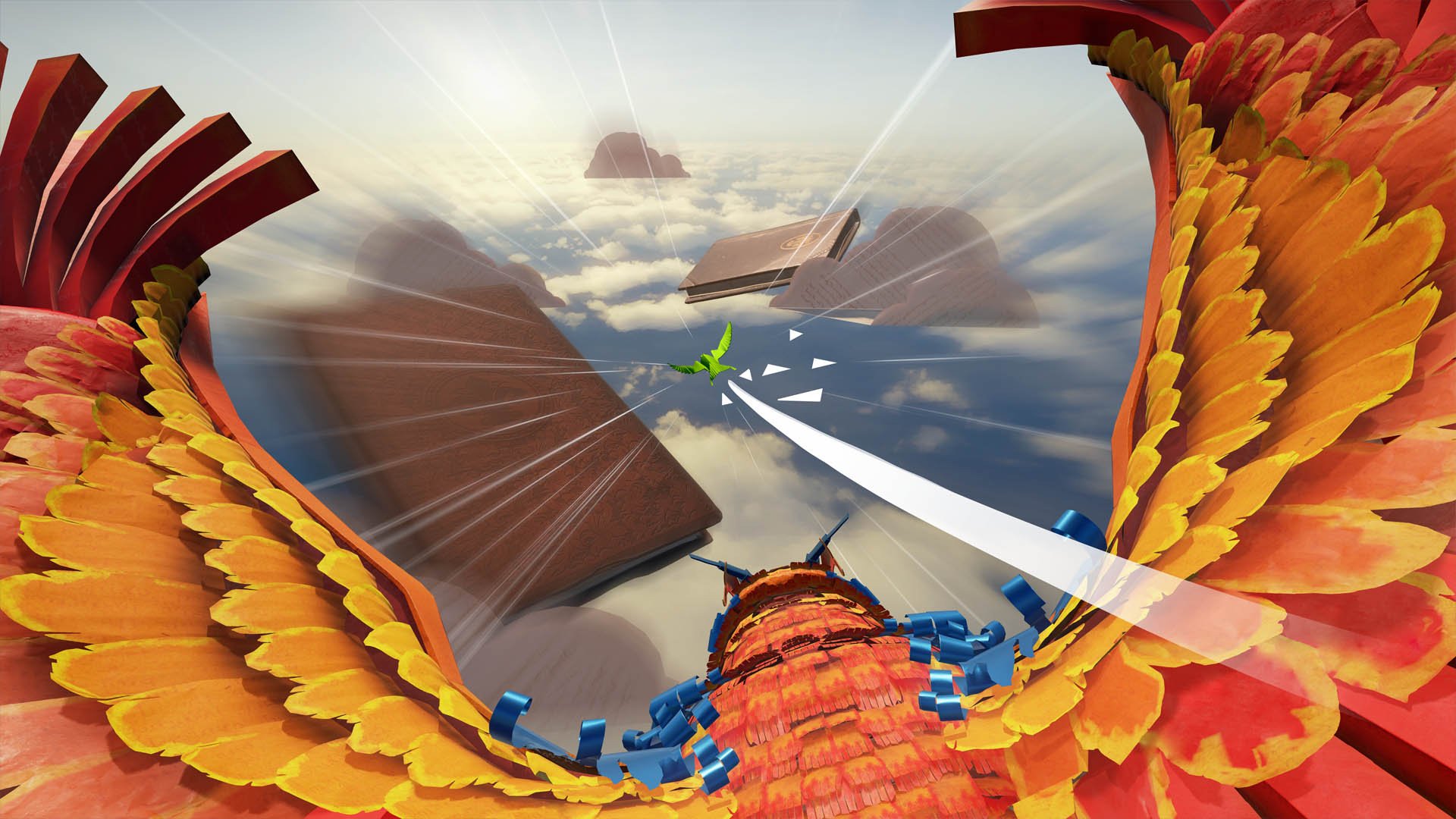 That premise might seem like an odd match for a relaxing flight game, but it’s woven rather well into How We Soar. While the story is partially told through voiced snippets of conversations, there aren’t discrete cutscenes, and the bulk of the narrative is expressed through the world designs. There’s a papier-mâché theme here, and as you play, abstract  paper pieces will twist and turn, reworking themselves into objects related to the author’s fantasy stories and events in his personal life.

In each of the 11 levels, you’ll flap around vast skies in search of colored rings to pass through, orbs to collect, and birds to chase after like you’re in a spontaneous game of tag. That’s the core loop, from beginning to end, and it’s there to keep you from zoning out too much or, worse yet, growing bored. This is not a challenging or punishing game by any means, though you do have to pay attention to your surroundings if you’re to ever progress to the next area. It rides that line effectively. There’s also a satisfying optional goal: to skim papercraft structures to “paint” them with color and detail.

Even with clear mandatory goals in place, I mostly found myself going slow and taking in the soothing sights and sounds, at least for the first few areas. The flying in How We Soar is inherently enjoyable, and with the way VR is implemented, there’s a decently convincing sensation that you really are riding on top of a winged beast. It’s the major appeal of this game. You use the left analog stick to control the bird while your head movements are matched to the camera, giving you the freedom to peer off to the side or behind you to better line up your positioning as you weave past obstacles. There was only a single frustrating moment where I couldn’t quite get the bird to cooperate, so I came away impressed.

If I have any hangups about How We Soar, they primarily have to do with the lackluster and at times predictable story, and some uneven pacing. It’s a bit of a slow burn on that front. And since the mechanics don’t evolve or significantly change the further in you get, your motivation to continue comes down to the spectacle of the paper-fashioned worlds and the basic act of flying.

My enthusiasm dwindled for a level or two toward the middle, but the story and level design did eventually pick back up and those invigorating developments brought me straight through to the conclusion. I also initially struggled with the way far-off objects can appear very out of focus (an unfortunate reality of this hardware), but I was able adjust to and accept that flaw.

As a lower-key alternative to the high-octane flying games in the VR space, How We Soar has found its niche, and it’ll serve those players well. It strikes a good balance between letting you unwind and also making sure you’re adequately challenged and engaged. The story doesn’t quite do enough to draw you into the author’s plight and keep you hooked, but the flying alone carries this game far.