Horizon Zero Dawn came out of nothingness and delighted thousands. Born on a lark as the “most risky” concept from a Guerilla Games pitch session, the aesthetic of meshing tribal warfare with high-tech creatures is intriguing all on its own before one even picks up a DualShock remote.

It’s also a compelling reason why Guerilla should be working on new IP. 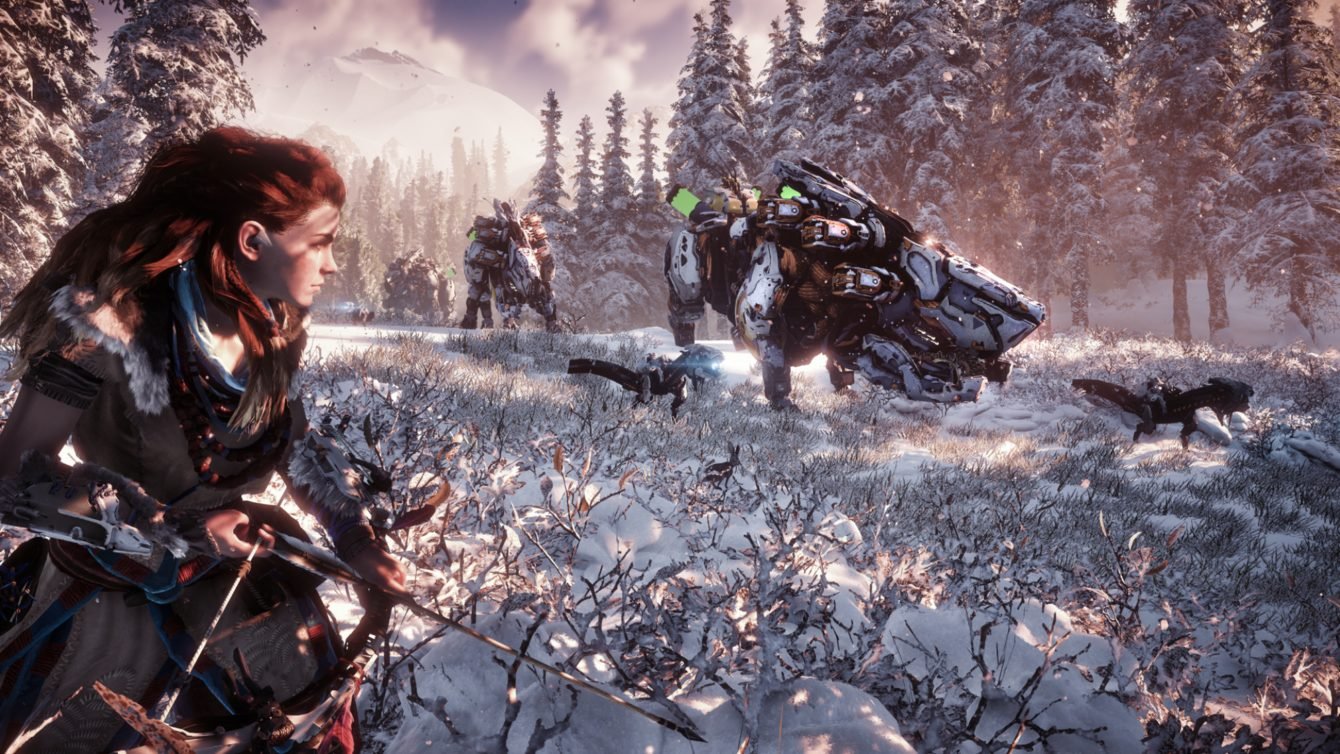 Horizon Zero Dawn‘s premise that man, in a tribal state, and machine, co-exist, sells itself. The promise of using a bow and arrow to hunt prey is something that’s been working its way into a litany of games in the past several years, much less with a metallurgy tint and lifeforms comprised of circuits and wires to resembling hulking beasts. But if you strip down the eye candy, Horizon focuses on a hero’s journey with a young woman at the center.

The name Aloy (pronounced “Ale-oy”) is slightly cringe-worthy, but she’s captivating enough to hold up the narrative, and formidable enough to hold my interest during some of the action sequences. I’ve always liked Ashly Burch’s work (particularly in the anime arena, she kills in Steins;Gate), and she succeeds in giving Aloy a little bit more spark than the average voice actor. We even get bonus Lance Reddick, who yells at Aloy almost with the same fervor as when he yelled at that asshole McNulty.

But beyond those two, the rest of the cast falters. Not only do they sport bland designs, but they really don’t have a whole lot of interesting things to say, even when you exhaust all of the choices on the occasional dialogue wheel. A rote “Aloy grows up” intro and tutorial drive the point home that from a narrative sense, you aren’t going to get anything you haven’t seen before.

It does get better though. The more you roam around the open world, the more captivating this realm gets, especially if you care to fill in the bits and pieces from some optional sidequests. The main source of entertainment? Killing robots indiscriminately in all sorts of ways. Yes you have a bow, sling, rope gun, traps, and all sorts of gadgets (with elemental flair), but you can get even more creative than that. You know that part in Return of the Jedi where the Ewoks roll logs onto an AT-ST? It’s like that. In fact, the entire game is kind of like that scene, but with humans instead of Ewoks.

What makes it fun is that the machines are formidable. Several of them are huge, resembling Japanese style Zoids or Metal Gear robots, and they make for some great open world candid boss battles beyond the scripted critical path ones from the story. The real draw is how open the combat system is, given that there are so many effective ways to approach a situation.

For instance, players can utilize different types of AI to take advantage of weaker pack animals, by routing them into a Home Alone-esque funhouse full of explosions and debilitating traps that cause paralysis. Or you can opt to use stealth to take them out one by one with critical kills before focusing on the pack leader. Alternatively, you can use your spear and dodge the old fashioned way.

Even still, there’s more options. By using a piece of tech Aloy acquires at the start, you can scan enemies (read: it’s detective vision) to identify their weaknesses, and even track their movements with little on-screen footprints. Or, you can take over enemies entirely by re-writing their programming (starting with weaker foes first, sans upgrades), turning them against each other. Much of my playtime was spent exploring, identifying situations, and coming up with a plan to take them all out.

It would be amazing if that’s what the entire game is, but you have to take frequent interludes to fight human opponents and move the story along, which as you can expect, is often a drag. Here it turns into a typical third-person action shooter, as the AI really isn’t as smart or adaptive as the machines. It’s not like there’s an overwhelming amount of these bits, but they are substantial, and humans are peppered into several of the cooler machine-oriented boss fights. 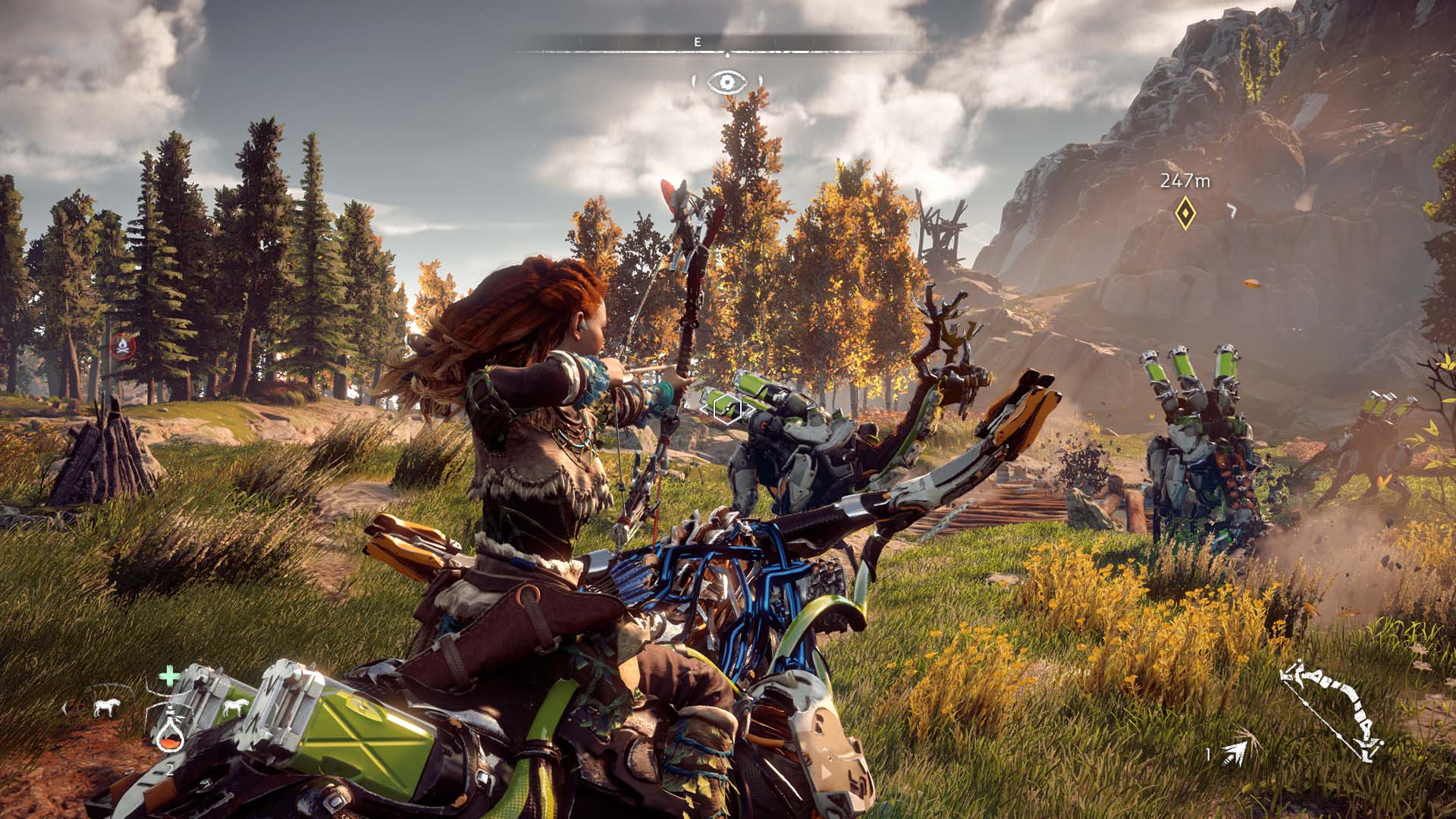 Missions also frequently shift from open world roaming to Uncharted-like linear romps in underground locations. The platforming system is forgiving as it provides the player a large degree of control (you can’t really fall unless you try, as Aloy will automatically grab or lock onto potential ledges), but as a result, it makes a lot of these sequences elementary, like you’re just going through the paces. They’re backed up by some killer lore fill-ins, sometimes of the much-loved audio tape variety and frequent story revelations, but altogether the platforming is a tad too safe.

It’s especially odd when juxtaposed to how heated combat gets, as machines tend to have large lifepools and dish out tons of damage. Although some might be turned off after being one-shot by a boss, I relished the chance to temper my skills and found the difficulty curve to be refreshing for an open world game. I never really had to specifically grind to beat anything, but the game does lightly push you towards sidequests as a means of leveling up (since, in a non-traditional manner, some missions grant you different stat bonuses than others).

Usually you can judge an open world game based on how much it makes me want to keep chasing those shiny map icons, and Horizon Zero Dawn is in the unique position in that it inspires me to just screw around. At no point did I feel like any arena challenges or bunker spelunking sidequests were droll, merely inoffensive filler, backed by a really strong core. On the way to an objective I’d get lost on purpose trying to craft an upgrade or find a rare material, only to look at my watch and see that three hours had passed.

Which leads me to another big aspect of Horizon, crafting and gathering. You can make nearly every resource, ammo type, potion, and trap on your person, but it takes effort, and some will find it tedious. For extra capacity pouches for instance you’ll need rare drops from animals (yes, critters are in too), like a piece of raccoon skin. But you can also loot another rare drop from them: raccoon bone. See what I’m getting at? 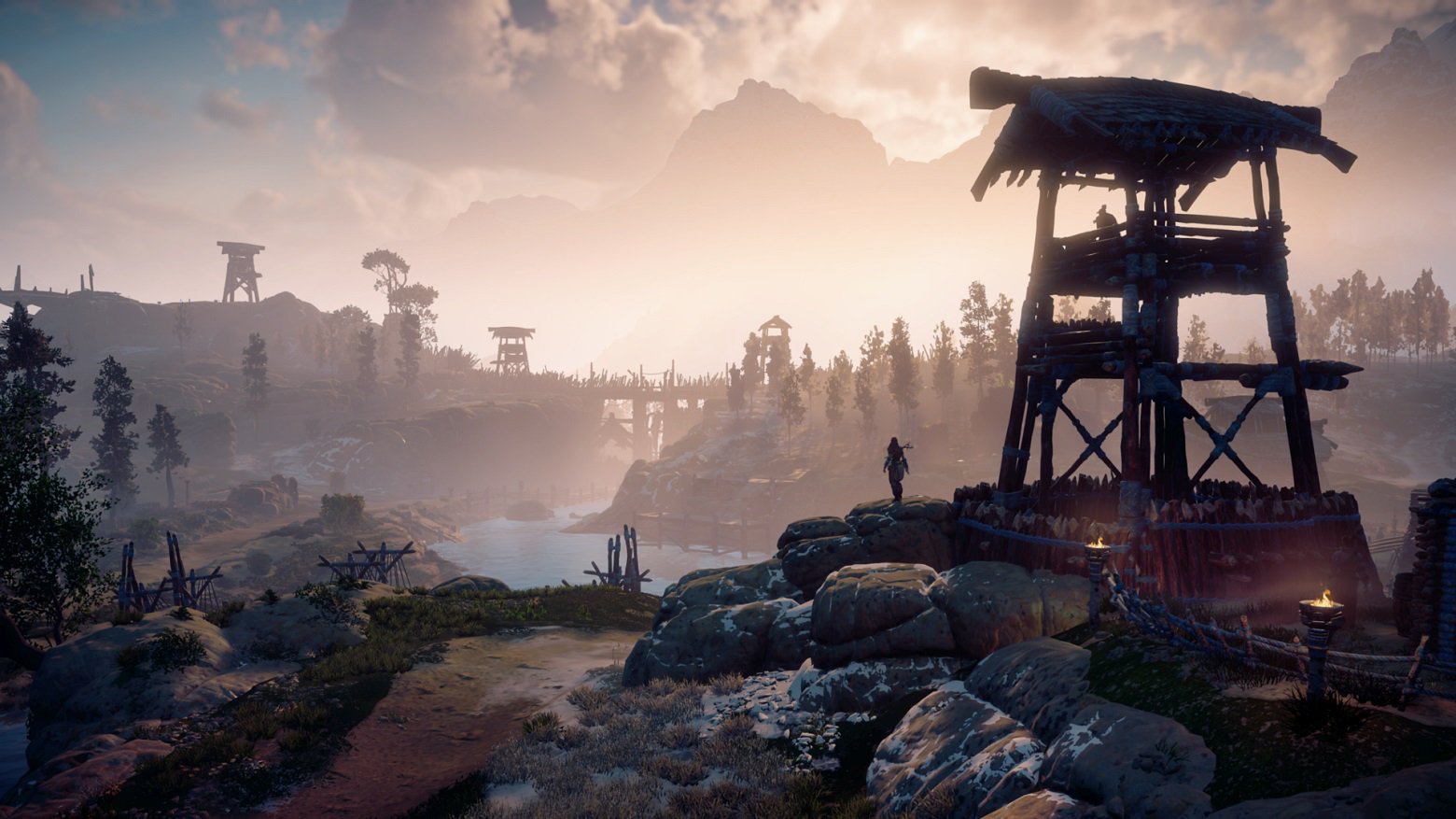 Lest you think corners were cut rushing an open world game out of the door, think again. The day and night cycle, which plays out even during multiple mission failures, is beautiful, as is the weather system. It’s stunning with 4K and HDR support (on a Pro),and although the 30FPS cap does sting at times, it’s mostly stable. Turning off the HUD and invoking the now Sony-standard camera mode also played a huge part in my decision to spend a lot of my time doing nothing in particular.

Horizon Zero Dawn is a fascinating premise wrapped in a tortilla of tropes. It has detective vision, radio towers, skill trees, masked load screens (Tony Hawk’s American Wasteland gets no credit for popularizing this in 2005, by the way), and a world map littered with billions of points of interest — all stuff you’ve seen before. But after you set up and execute a cunning plan to decimate a pack of giant robot crocodiles and that smile hits your face, it’s more excusable.