You’re as cold as ice

Horizon Zero Dawn is probably at that “tentpole” level at Sony by this point. They have the sales and critical acclaim under their belts, and after nearly a year they figured they’d dole out some DLC while we wait for the inevitable sequel.

Although I wasn’t as crazy over it as most, I’m perfectly okay with getting more of it. There’s plenty more tales to tell not just involving Aloy, but in the Horizon world as a whole — which is where the Frozen Wilds expansion comes in. 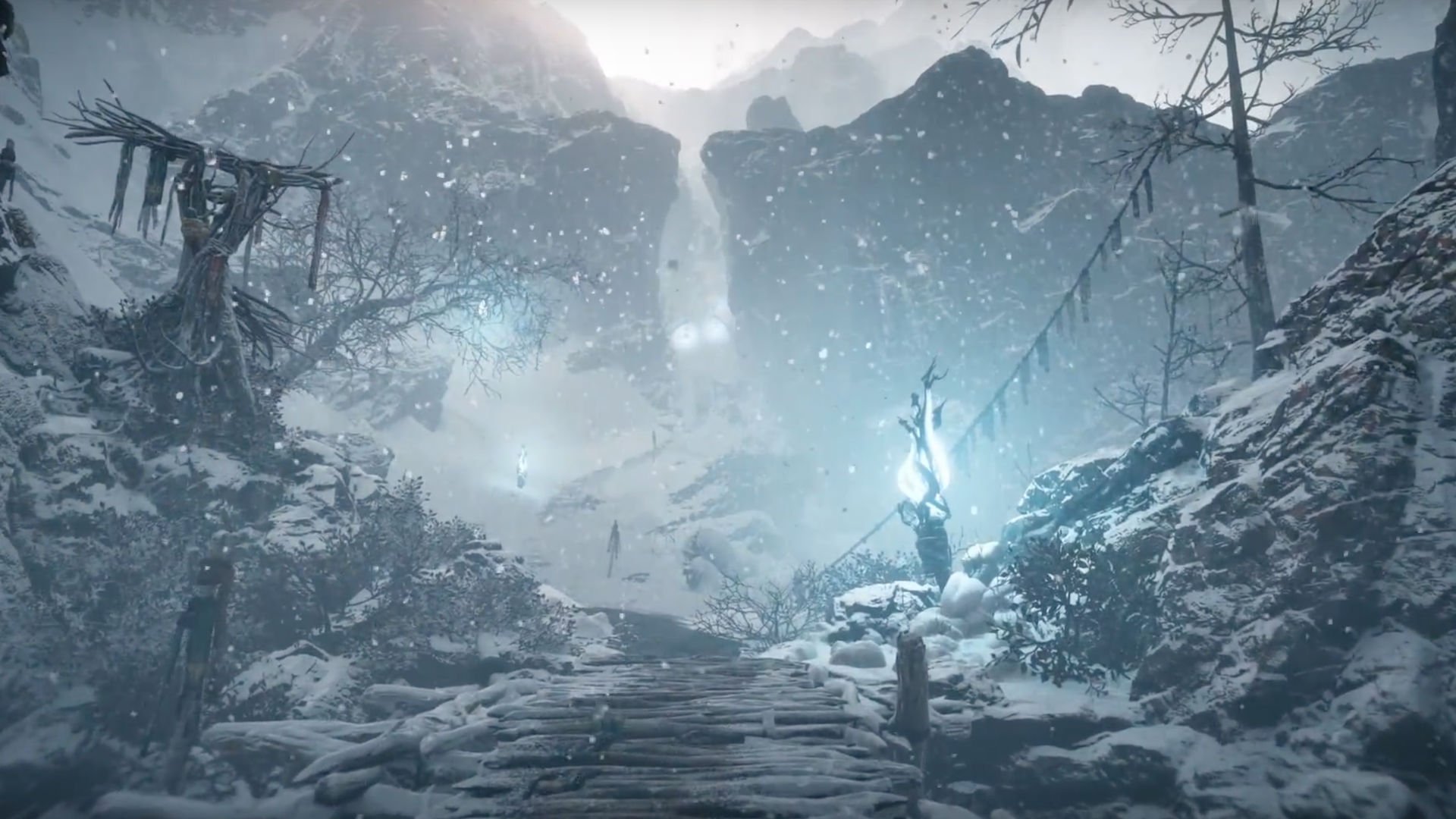 Expansions, you remember those right? The things that deliver a substantial amount of more stuff to do and having nothing to do with gambling for loot boxes or micro-quests? To clear the air on all the technical bits first — this is not a standalone expansion, it’s tweaked to cater to players who have already finished the game and are roughly level 30, and it’s not an isolated experience, but rather connected to the main map. Cutting through the fat, it’s a new area, more robot dinos, and new gear/one more skill tree branch.

The Cut, the new zone, is roughly the size of a major area. Its initial linear lead-in isn’t anything special, but once you walk in you’ll know it. As well as icy winds that can screw with your vision, you’ll also find a group of Banuk who are aimless due to poor leadership from their chieftain and shaman. It’s up to Aloy to save the day from a “daemon,” apparently, and the mystery begins. But I’m more interested in The Cut itself than the story it has to tell. The further you go in the more tumultuous it is, which has a nice sense of progression to it. I fell back in love with the ease of gathering once again (which has a new resource, Bluegleam, to find), and the teal glow that adorns the area is mesmerizing — especially when in HDR mode.

Its other big addition, the Traveler skill tree, is sadly uninventive. It opens up with “picking up stuff while mounted” and “50% extra shards when dissembling resources” before branching into machine repair and more “extra resource” fluff. Outside of fixing NPCs (mostly mounts) every so often it’s basically just another Forager tree, which is a massive disappointment. Aloy feels formidable around level 30 as it is, but the expansion fails to elevate players in any meaningful way beyond what they already have.

I was quickly reminded of the Detective Vision mechanic (which is usually employed in the exact same way for each puzzle) and the shoddy objective markers (which at one point, in a cave, completely pooped the bed). Slowly investigating ways to open a door in a bunker isn’t something I wanted to do more of. But I also got to re-experience all of things Horizon Zero Dawn nails. Since Aloy’s combat fundamentals are nigh unchanged, I didn’t have to relearn any wildly different tactics — which is fine. Swapping from short to long range combat with traps in the middle still feels great, and the enemy AI can be impressively aggressive when it needs to be.

Giant bears (Frostclaws) are the highlight when it comes to Frozen‘s denizens, and the added element of daemonic corruption places The Cut in a slightly different category. Reduced vision is a cool factor to deal with, especially when multiple mobs are swarming you. When in doubt I just revert back to my hunting mentality, roaming the tundra for random things to kill to earn potential crafting resources.

The Frozen Wilds doesn’t feel like a must-play add-on, but it’s more Horizon Zero Dawn. It’s something you can enjoy once or stack with New Game+ runs when you inevitably play through it again. In other words, an actual expansion.