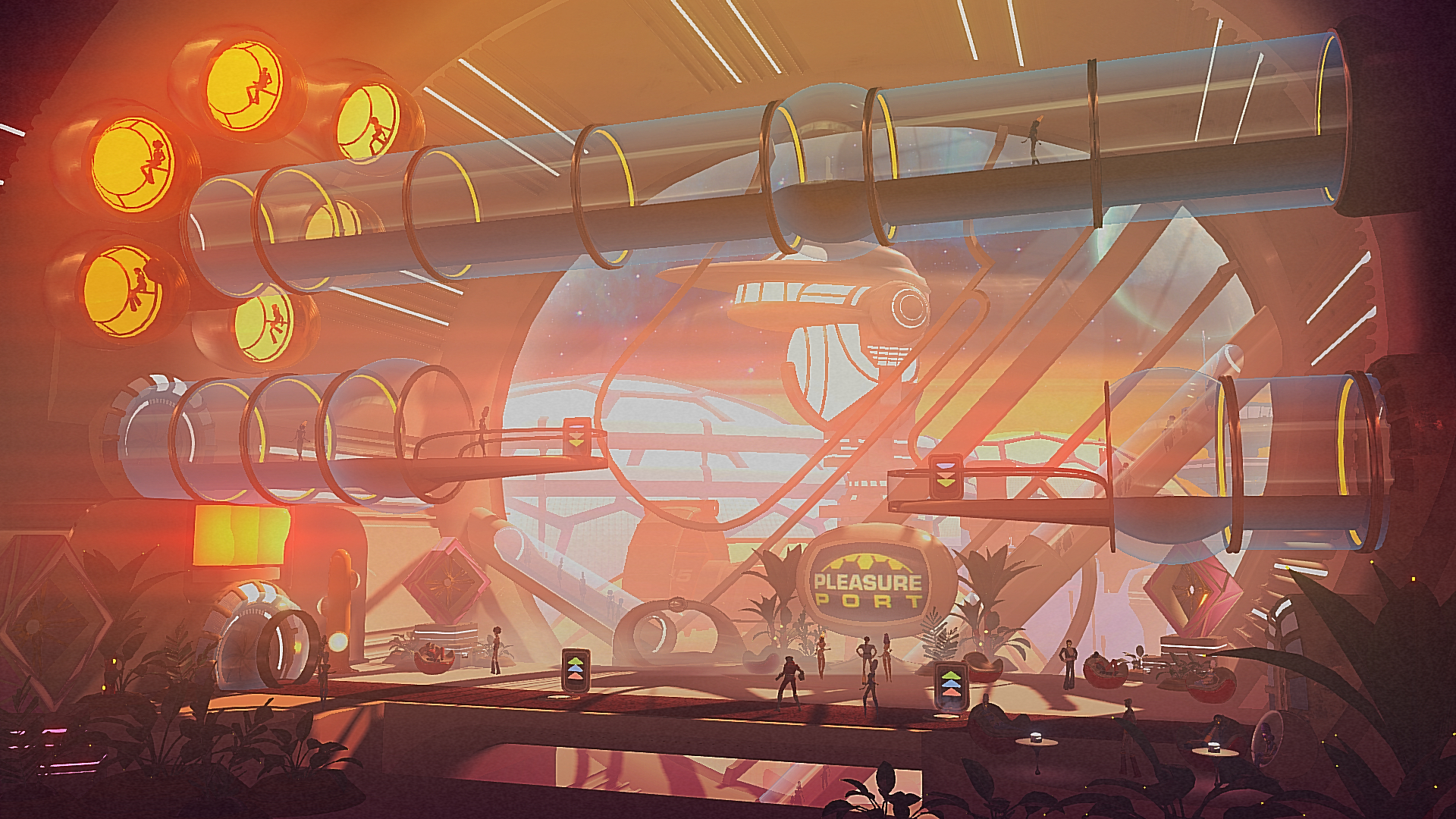 Headlander knows what it is but doesn’t know what it wants to be. The tutorial gives you a singular impression — this game is a puzzler with light action elements, à la The Fall (a comparison I was unable to shake, even as Headlander‘s heavy ’70s aesthetic continued to press down on me). Although that core loop never truly wavers, the game constantly tries to ditch the promise it made in the first handful of minutes.

As a result, its diversions feel less like variety and more like an identity crisis played out across six hours of intermittent frustration. When it has the space to breathe, it’s a fine (if slight) action-adventure title. But such moments become rarer and rarer as the game goes on. Eventually, that breathing slipped into hyperventilation and Headlander lost me completely. 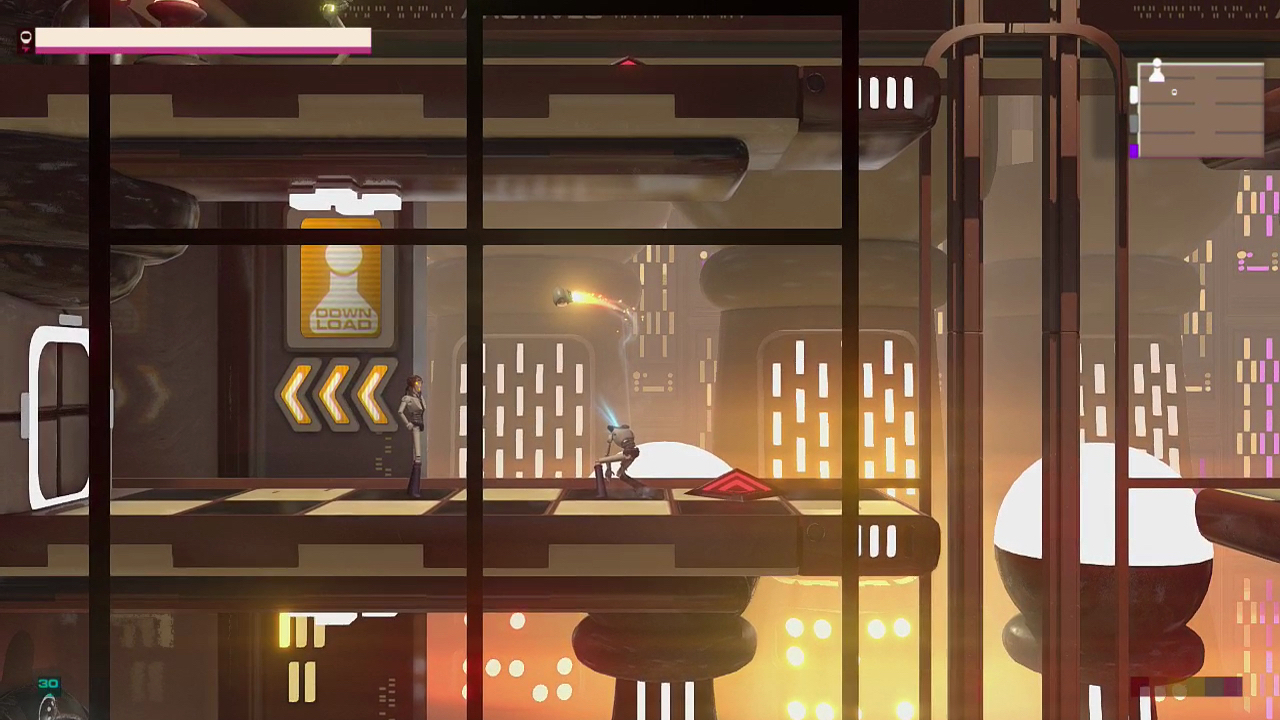 In Headlander, you play a disembodied head. You don’t know who you are, you can’t speak, and you’ve got a sick rocket where your neck used to be. You’ve been woken from your slumber by Earl, a disembodied trucker voice who fills you in: it’s the future, all human brains have been uploaded to robot bodies, and an evil AI called Methuselah is in charge. You might just be the last organic being in the solar system, so Earl recruits you to fight Methuselah and his army.

Your primary method of fighting back is to use the vacuum function on your space helmet to pop heads, dongles, energy crystals, and other dome-shaped knickknacks off their perch and take control. That helmet you’re wearing isn’t up to much in a straight fight, but take over that laser-shooting robot and you’ve got a fighting chance.

Over the course of the tutorial, you should get the hang of Headlander pretty quickly. Within minutes, I found myself ripping cybernetic heads off artificial bodies, booking it towards their buddy, launching off at the last second, and ripping off my foe’s head while they were confused. It’s great fun, although it got old once I had mastered the system.

Once you’re off the tutorial ship and on the space station where the majority of the game takes place, Headlander‘s progression goes sideways. There is a simple metroidvania “get the powers, said power unlocks new areas and old passageways” structure, with stronger and stronger enemies as you progress. All that works just fine. But when Headlander tries to get clever, I get lost.

There’s an odd diversion midway through where you engage in a bloodsport (oilsport?) that reads as a cross between the Hunger Games and the chess game from Harry Potter presented in 2.5D. It’s not exactly confusing, but God help you if you pause and come back after an hour. You have to take a specific chess-themed body from one side of the arena to the other. Do this multiple times, and then you get to bang your head against a long, frustrating boss fight. None of this is entertaining in any way.

Headlander mixes things up a handful of other times (the arena fight where a bunch of repurposed map robots show up and stun-lock you to death is so god damn awful that I briefly considered converting to nihilism in response), but it never manages to be as successful as other games that play with their own mechanics. In, say, the latter Saints Rows, those kinds of diversions pull from a set of core, previously established ideas to subvert expectations. Here, it feels like Headlander changed the channel and you’re playing a segment from a slightly different game all of a sudden. 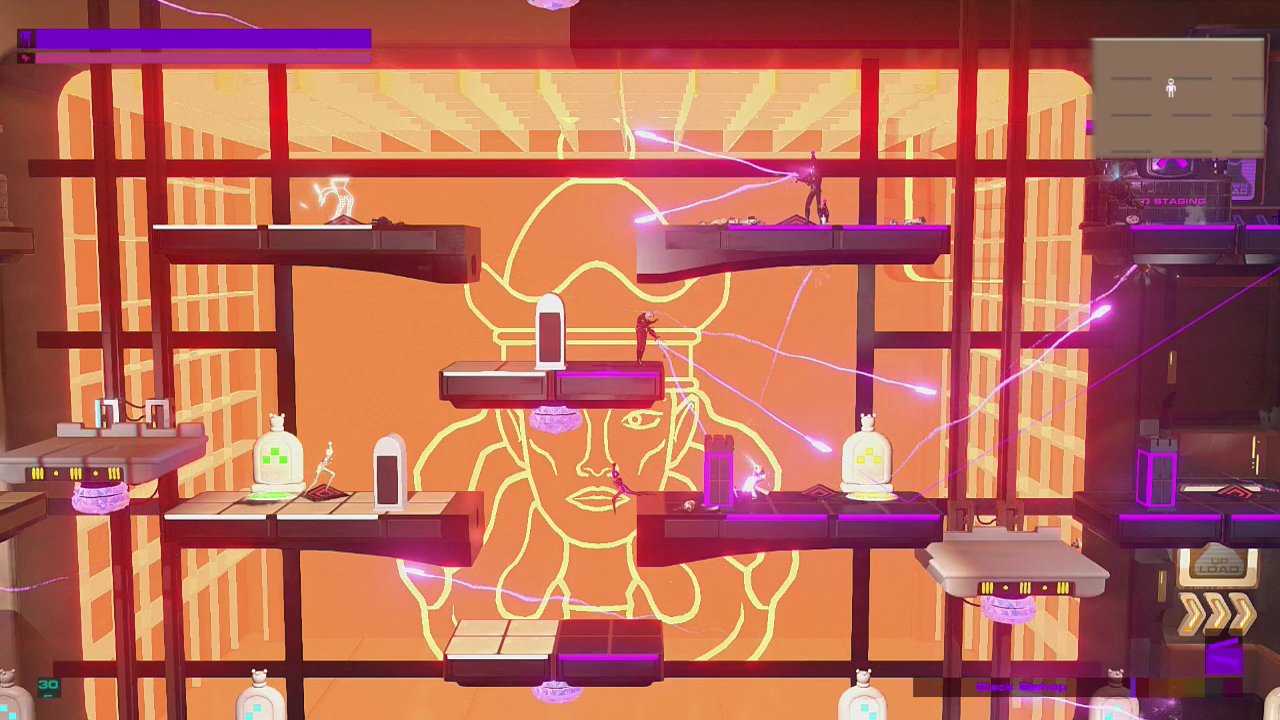 Don’t get me wrong, you’re still playing Headlander. There’s a lot of popping heads off bodies, no two ways about it. And don’t mistake my situational disappointment for general dismissal; a guided tour through unused science fiction anthology concepts would have worked if the ideas were given their due. As it stands, these diversions feel muted — like they aren’t being pushed to their full potential in what little time they have.

The same can be said for Headlander‘s primary thematic through-line: like, can machines be alive, man? It’s nice to see this idea framed through 1970s retro-future instead of the slick Next Sunday A.D. seen in games like Deus Ex: Human Revolution or movies like Ex Machina. But that’s not enough. I finished Headlander about an hour ago and I couldn’t tell you what its overall stance on transhumanism was.

Not to spoil the story, but there’s no real moral choice (interactive or otherwise) presented to any of the characters. The idea of freedom fighters trying to return to their organic roots, pushing against a system where most of the citizens seem content with their new lives could be an interesting jumping-off point, but Methuselah is never presented as anything beyond an evil robot. He’s just the HAL 9000 without any of that ebony monolith’s unsettling charisma. 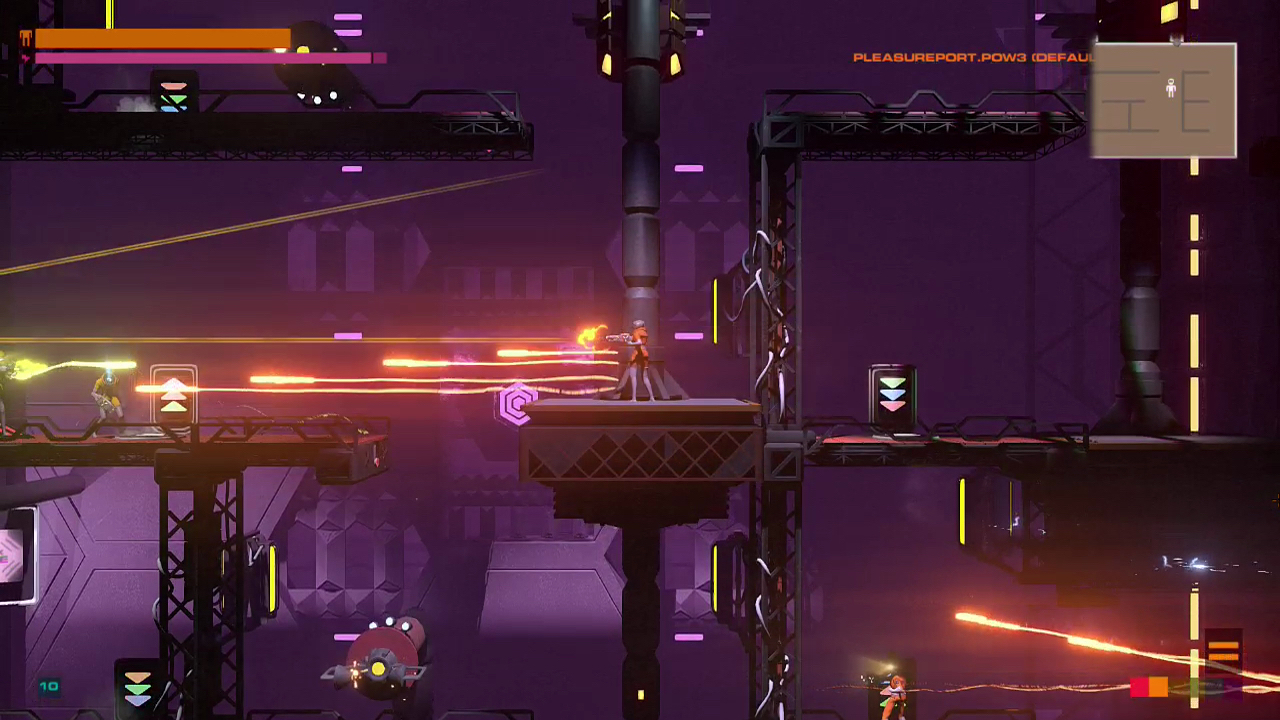 We’ve seen the android moral dilemma before; in games, film, literature, comics, and countless other methods of human expression. Headlander does little to stand out among its peers, or even to enter the same conversation. It lacks the bombast of the Deus Ex prequels, the emotional and thematic interplay of The Fall (there’s that game again!), or the intimacy of the Hateful Days duology. Here, characters opine at you about the nature of humanity for like, a minute, and then nobody says anything for another couple hours.

The story has the same problem; emotional beats come and go with little to no impact. Named character death should not feel this inert. At the very least, the player should have an idea of how that event changes the narrative thrust, but nobody seems to matter all that much aside from the protagonist. Engaging with this game’s writing is a fool’s errand. At least some of the jokes are funny!

Headlander’s aesthetic, one of its biggest selling points, feels very surface-level. I do appreciate the ’70s sci-fi look; you don’t see much of that in media these days. But it doesn’t exist to create a mood, further a theme, or really affect the game in any way. Aside from a shag carpet, Headlander‘s world doesn’t feel any more analog for existing in this specific vision of the future. It does look good, though, for all that’s worth. 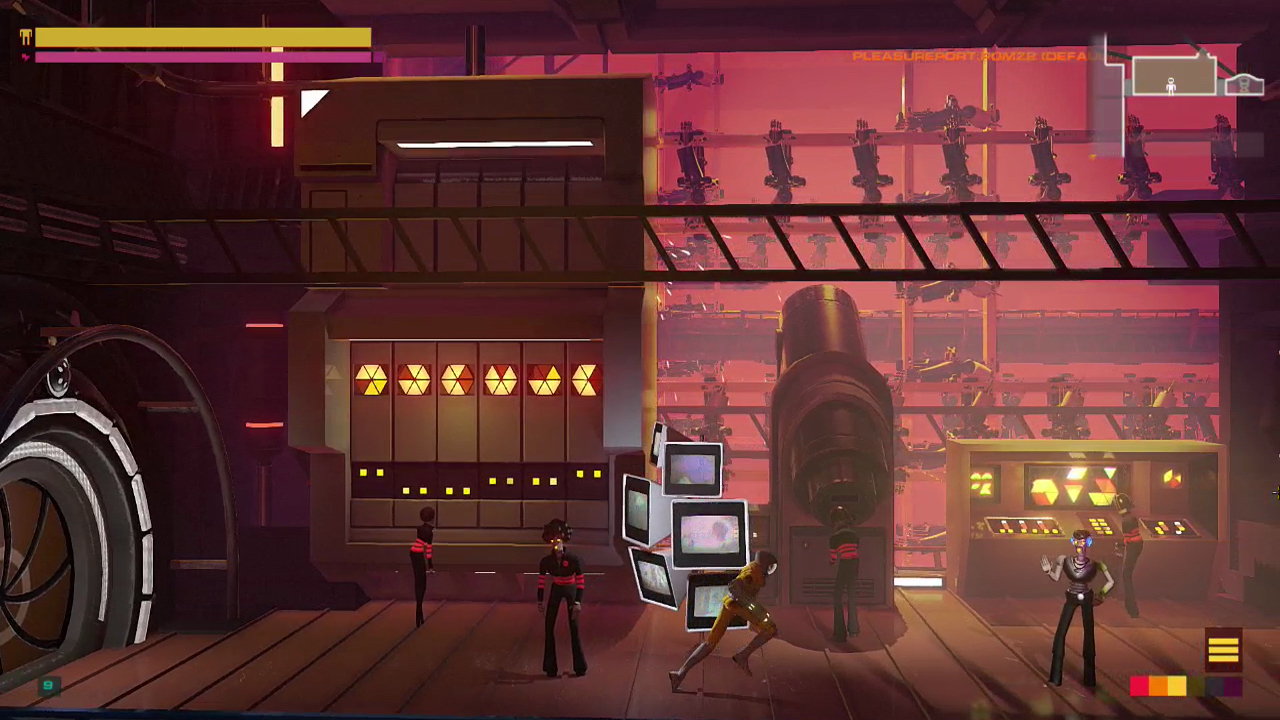 I feel bad about knocking a game for not leaning all the way into what is unquestionably a unique visual style, but the more I played Headlander, the more I was itching for any kind of depth. When it’s not shallow, it’s frustrating. I did honestly enjoy the segments where the game sheds its ambitions in favor of light, affable metroidvania puzzling, but there aren’t enough of those moments. (A sequence where you scramble around an elevator shaft solving puzzles is easily the highlight.) The parts of Headlander that don’t quite fit — there’s a final boss you have to fight using puzzle mechanics — chafe to the point of discomfort.

Without those lackluster diversions, it would be an amicable trifle. Even at its best, the game feels like an idea gestating in real-time, like a sponge dinosaur filling up with water. So much of Headlander teases you with the idea of what could have been; a shame, because the game we actually got is kind of a bummer.