One of the things that is so appealing about science fiction is that it deals with situations that seem fantastical, but are ultimately plausible. Technology today would look like magic to those from years past, and so the technology of the future might seem incredible to us now.

Good science fiction brings up not only these possibilities, but the questions that would show up alongside the possibilities. The nature of these questions can be ethical, social, psychological, philosophical, or just technical. Halfway asks: What happens if you spend too much time in the “in-between” when making a faster-than-light jump?

Halfway answers: “Aliens show up and you shoot them a lot.” 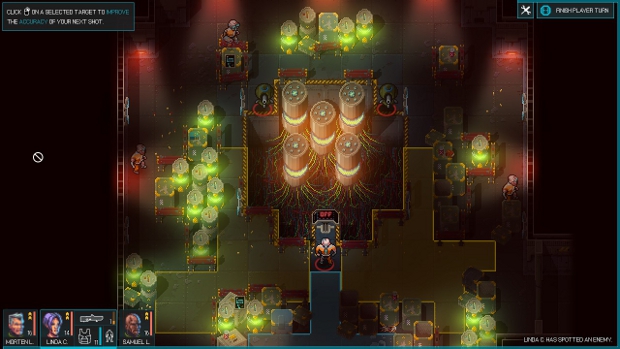 At its core, Halfway is a turn-based tactical combat game, with heavy emphasis on ranged attacks and cover. There is some minor character progression, generally through small stat boosts and weapon upgrades, but for the most part, the focus is on how best to arrange members of the team in order to maximize damage output and minimize incoming threats.

Players take on the role of Morten Lannis, a hardened space marine who wakes from cryogenic slumber on a ship named Goliath before it had reached its destination. Of course, the journey has gone awry somewhere along the line, the ship is making several seemingly random FTL jumps, and each time, mutated humanoid intruders show up to ruin his day.

Most of the 34 levels play out similarly to one another. Lannis and his ever-growing team of survivors investigate a new area of the ship, then at some point they are ambushed or caught off guard by another FTL jump and beset by a new group of enemies.

Although it sounds predictable, this formula actually makes for some of the most tense gameplay. As the small team creeps through the derelict vessel, each corner turned can be the beginning of a battle. What results is a fairly realistic tactical experience of leading a squad into unknown territory. I found myself setting squad members up individually in various cover spots, peeking into a room with a scout, finding it clear, and then doing the same for the next room.

While there is no enemy activity, players may freely move about. However, once an enemy is spotted, Halfway‘s control transitions to turn-based, where each character gets two action points. Action points can be spent on moving, attacking, focusing for a single accurate attack, using items, trading items, equipping items, or on a character’s unique special ability. One neat tweak on the formula is that characters need not complete both actions consecutively; one may perform an action, a second may interrupt with an action or two, and then the first may continue.

The system is not overly complex, but there are some ins and outs to learn in order to be successful. This is where one of Halfway‘s biggest failings shows up: Its mechanics are very opaque, and it does little to explicitly explain them. For those who want total control over the battlefield, that can mostly be achieved, but only after a good amount of trial and error. 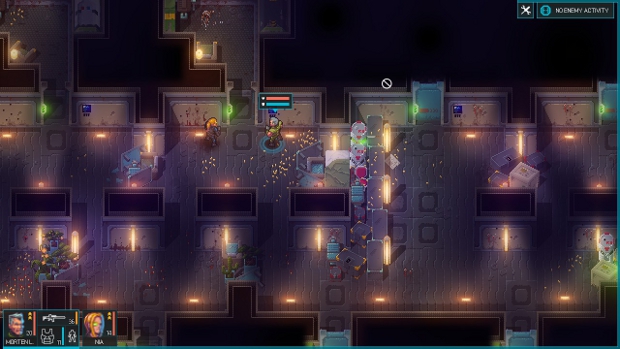 For instance, since ranged combat on a square grid is the name of the game here, line of sight and distance are paramount to a good battle plan. However, line of sight measurement is never made explicit and the exact calculations for how range affects hit percentage are not shown. Near the beginning, I would occasionally move to a space where I thought I would have line of sight to an enemy, only to find that I could not attack. Later, I realized that there is a system in place highlighting which enemies can be seen from various spaces while a character is moving, but this system itself is never pointed out. It just exists to be noticed at some point.

Continuing in this vein, the cover mechanic is never fully explained. While there is hard cover and soft cover, each affording a certain percentage of protection from incoming fire, its relation to line of sight is unclear. Diagonal shots might or might not be affected by cardinally-facing pieces of cover; after completing the 15-hour campaign I still cannot say for sure. Most egregious is that the single most important tactical maneuver is never even mentioned: certain pieces of cover allow a character to peek and trace line of sight as if he were in an adjacent space, while simultaneously preventing enemies from seeing him without moving to another vantage point.

Perhaps my background in tactical board games — where every rule must be spelled out in order for proper play to even occur — has spoiled me in this regard, but it really seems like Robotality came up with the laws governing combat in Halfway, then proceeded onward assuming every player would be on the same page from the beginning. 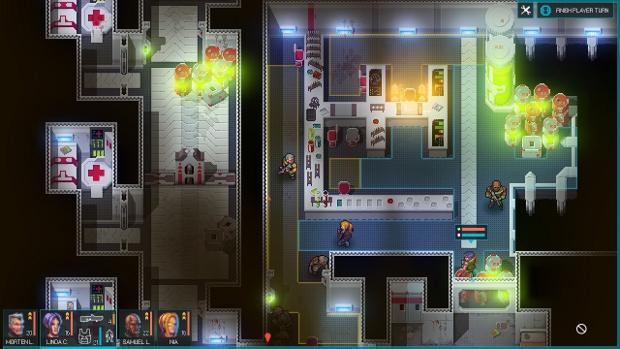 The amateur mistakes extend past the general lack of mechanical explanation. Another place they surface is in the user interface. Often, an object can only be interacted with by clicking on a small portion of it. Sometimes, clicking certain squares has no effect at all. Scrolling through the map feels stickier and slower than it should at times, and it continues long after it should have stopped at others.

A few times, when trying to select a different unit than the one I had selected, I accidentally misclicked and moved the selected unit. With both actions spent and no undo functionality for mistakes or changes in plans, she was a sitting duck, and I had to spend extra effort and resources trying to salvage the operation.

More disappointing than the user interface shortcomings is the generally dull writing. Though the overall plot of Halfway is mostly serviceable (barring the unexplained boss fight and a slew of unanswered questions), the character dialogue lacks personality. Most of the eight playable characters lack a distinct voice, and once a unit with a unique voice shows up, he is intentionally unlikable to an extreme. To make matters worse, he is a required unit for many of the story missions, and he has one of the less useful special abilities to boot. 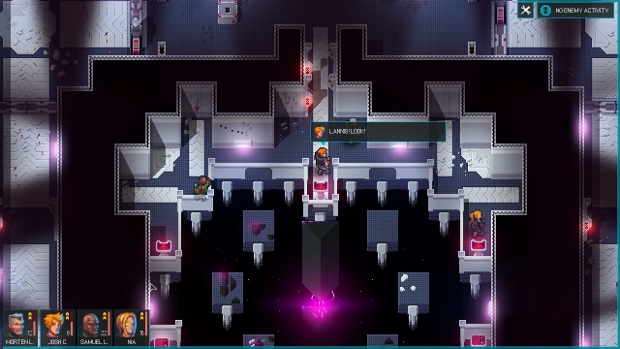 Where Halfway excels is in the presentation. The art is vibrant and detailed, while still invoking the nostalgia associated with chunky pixels. Lighting effects help this immensely, offering not only some eye candy but also contributing to the eerie atmosphere of being trapped on an abandoned spaceship and stalked by alien creatures. For those who pay particular attention to graphical details, the environments early on hint at events near the end in a small way. The sound design is similarly well-handled. Though the soundtrack is not particularly memorable, it does evoke a spooky space feeling, and is well-suited to the tense moments before combat begins.

Despite all the criticism I can levy against Halfway, I still enjoyed it quite a bit. The mechanics in place lay a good foundation and the aesthetics leave little to be desired. The combat hits the sweet spot in difficulty where it is not a cakewalk, nor is it insurmountable. Once the player really understands the rules of the battlefield, it hits the right neurons for tactical bliss.

Perhaps that is why its shortcomings are so glaring. What is good here is really good, but what is bad detracts enough that the entire package is a bit of a disappointment. A great piece of science fiction may ask a lot of hard questions and make the audience think. Halfway is not a great piece of science fiction, but it is a good strategy game for those willing to put some effort into it.