Guildlings is a game that just launched on Apple Arcade, and it’s got a whole lot going for it. Through a mixture of RPG, point-and-click, and visual novel mechanics, it tells the story of a young girl who gets her first phone. Only, it’s not actually a phone. It’s a tome, and it turns her into a total nerd who forms a guild and goes on quests and stuff!

Let’s back things up for a minute. Coda is a young girl who hasn’t seen her friends in years. She never had a phone, so the only way they could keep in touch was through crummy old letters. That all changed when she was gifted one from her sister, who neglected to inspect it for any viruses or curses beforehand. Next thing you know, Coda has already signed the Terms & Conditions, and now she’s trapped in a giant bubble until she forms a guild and completes one simple quest: save the entire world. That’s a really intimidating ask, so she decides to just help her sister go on a date instead.

This may all seem absurd and ridiculous, and that’s because it absolutely is. It’s also, surprisingly, adorable and effective as an impetus to get things going. 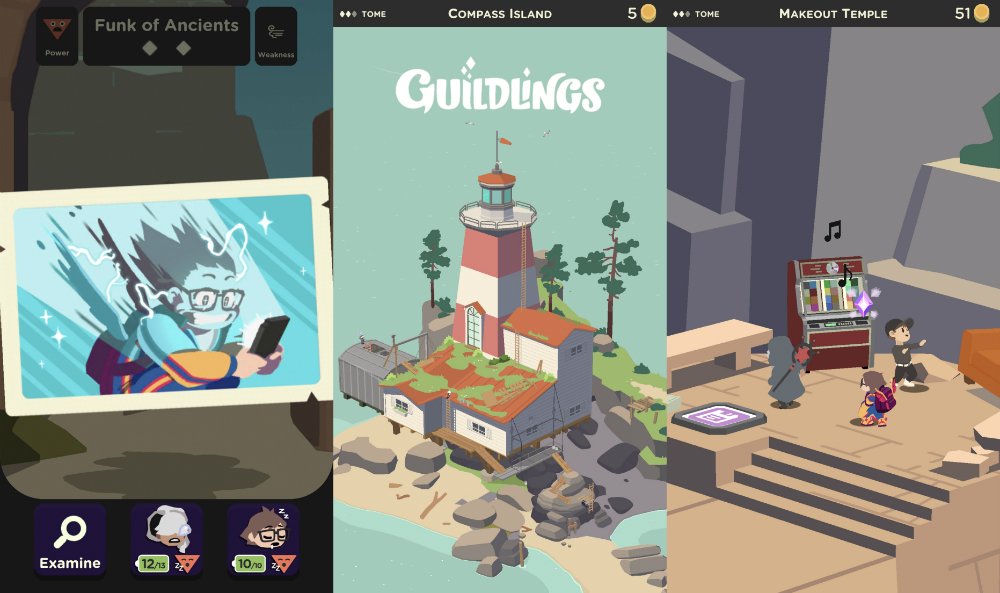 Since Coda is trapped in a bubble and can’t move from her bed, she’s forced to navigate the world as a floating icon that must recruit her friends to help. Tapping on the screen moves characters forwards, much like clicking a mouse in traditional point-and-click adventures, and a press and hold will move more akin to a digital joystick. I found myself settling on a mixture of the two methods across the journey.

A good portion of your time will be spent finding items and solving some extremely light puzzles. Seriously, this is not a difficult game, and the majority of the focus here is on the character dialogue and story.  However, you will occasionally find yourself in combat situations.

Combat in Guildlings, unlike the standard genre fare, is all about not fighting. It’s set up like a traditional RPG, but your “attacks” involve delaying things and running down enemy meters until they no longer have any energy.  Each character has special moves that are relative to their class, and by the end, you’ll need to make use of all of them in order to outlast opponents.

Continuing the theme of non-violence as an answer, your companions’ abilities aren’t leveled up by fighting. Instead, they gain points when you say nice things to them or just act as an honest and true friend via dialogue options. When I say “honest,” I do mean honest. Characters react differently to dialogue approaches, and the game always seemed to reward responding realistically, for better or worse.

These are your friends. They know you. They’ve known you forever, and if you come at them with some bullshit, pretending everything is great when it’s not, they will call you out. These interactions felt lived-in and refreshing. They made me care more about everyone involved because they felt real.

The soundtrack is also legit gorgeous. It’s worth popping on a good pair of headphones while playing. Even as I’m typing this, I’m still listening. I’ve had the game paused for about an hour now, while I just soak it in. There’s a sense of atmosphere throughout that perfectly captures how I felt during my time with the game. The music takes risks, and it pays off. At the very least, if you have any love for me at all, play with the goddamn sound on.

Now, as fantastic as the overall experience is, it’s not without some faults. For me, the only thing holding Guildlings back from an absolutely stellar review is the presence of technical issues and the fact that the story ends on a cliffhanger. I encountered a particularly soul-crushing glitch, about one to two hours in, that made it so I couldn’t progress. I had to restart from the beginning and take extra care to avoid the exact circumstances that caused it. 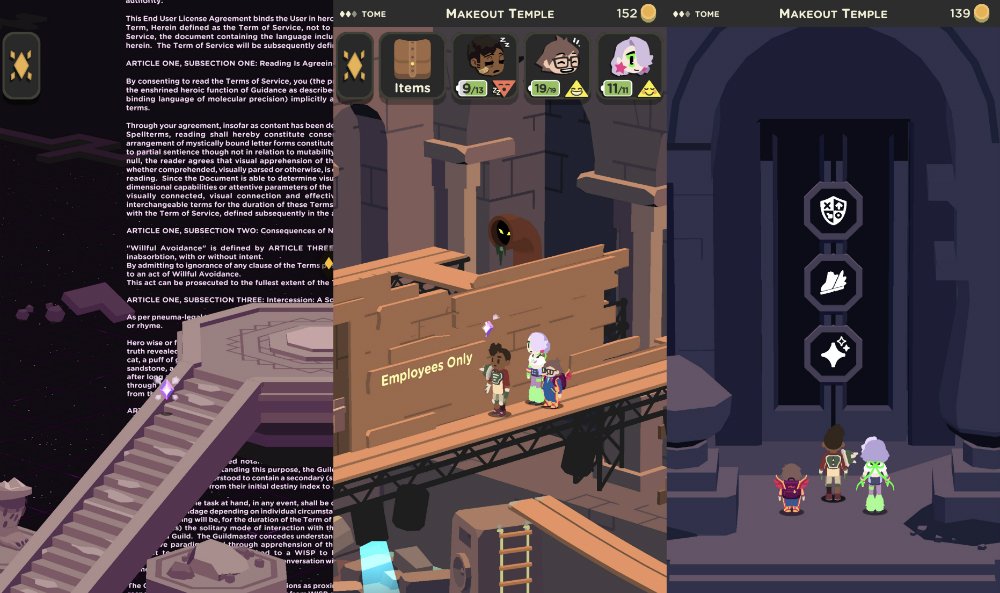 This wasn’t an isolated incident either, as I found others online who had the exact same issue as well. Luckily, the game was worth jumping through the added hurdles, and the rest of the roughly four to five-hour experience was fantastic. Although, this is an episodic adventure, so you’ll need to wait for the next update to see how things conclude.

While these inconveniences did hamper my enjoyment slightly, it was far from enough to keep me from wholeheartedly recommending it. This world and its characters are going places, and I’m stoked to see how things play out.

The artwork, music, story, and dialogue all had me positively brimming with joy. Guildlings may still have a few kinks to work through from a technical perspective, but everything else it offers up, even with the setbacks, has firmly cemented it as one of my favorite mobile experiences to date. It’s got so much goddamn heart that I can’t help but sing its praises.

It’s a beautiful story about caring and being there for the people who matter most. It’s also really gosh darn funny, and I love it.