I’ve played side-scrolling shooters starring space ships, fairies, gothic lolitas, but never had I played one starring a knight atop a gryphon.

“How original,” I thought, with fantasies of knightly glory on my mind. “Surely this theme won’t be squandered on a poorly-designed game.”

Boy, was I wrong. 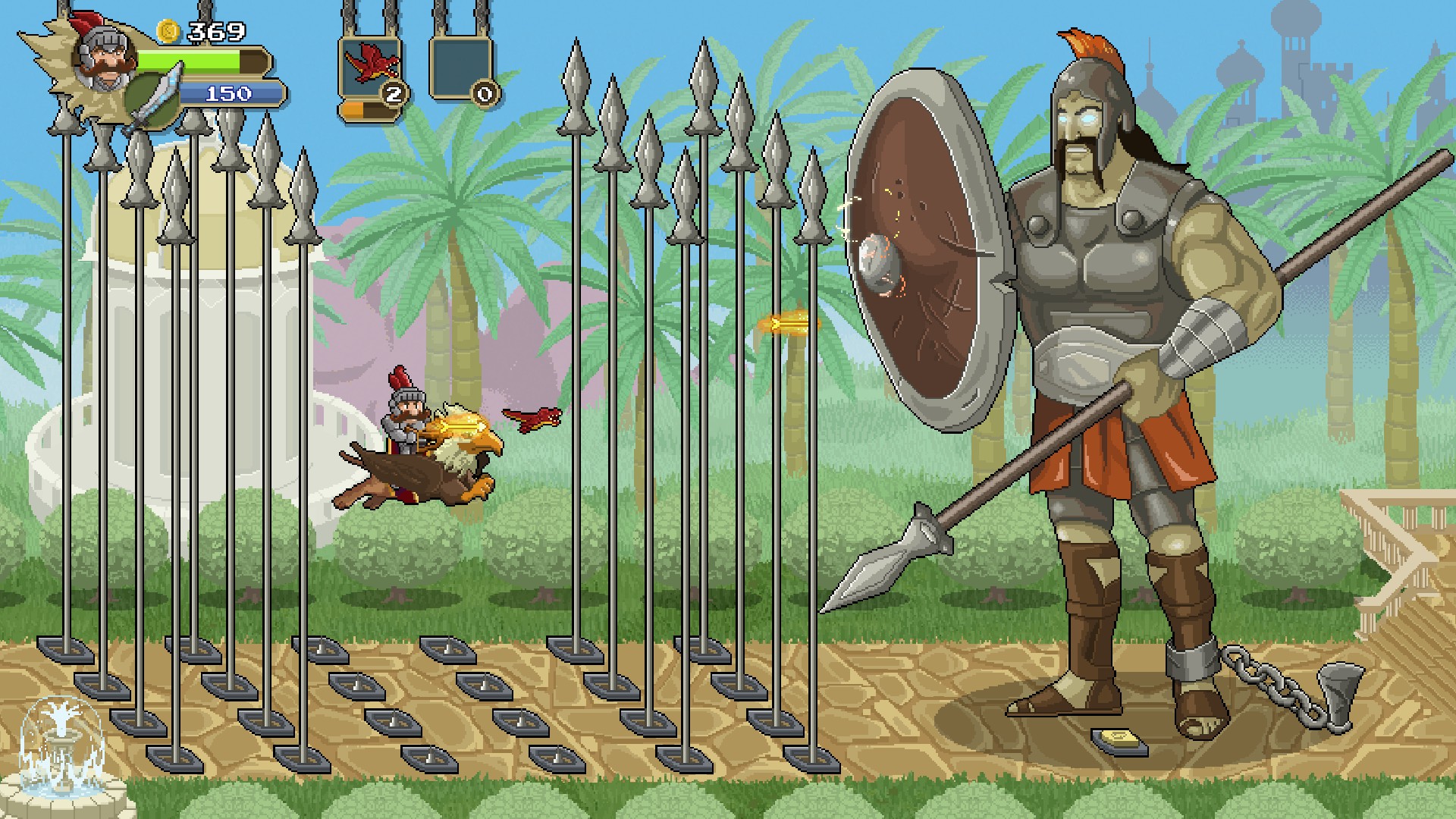 A diverse group of warriors set out on a journey to kill a great dragon, and upon doing so find a stash of treasure; Gryphon Knight Epic‘s intro is seemingly ripped straight out of J.R.R. Tolkien’s writing. The same goes for Tree Stache, a mustached tree character met later in the game. The warriors all find weapons and take them with glee, while the gryphon knight himself, Sir Oliver, takes a shiny amulet. Turns out the weapons are cursed, causing all the characters to let their bad sides take control of them and, wouldn’t ya know, the only thing that can cure them is the amulet.

Sir Oliver is told this information in pretty plain English by his bad side that presents itself as a shadowy physical incarnation of him, but he doesn’t seem to grasp it right away. I think Oliver not grasping what was just told to him was supposed to be funny, but it just wasn’t, much like all of the writing in Gryphon Knight Epic. You could guess the story, as it has been told a thousand times: Knight frees all his friends, then faces the ultimate evil. The ending is especially cringeworthy. It abruptly sets up a sequel that surely no one will be clamoring for.

On the surface level, Gryphon Knight Epic looks like it could be something new for the genre, but the only things it does original are terrible. If you’ve played more than one side-scrolling shooter, you’ve probably realized that most of them have one tiny hitbox where the player can take damage and they are otherwise invulnerable. This is not so in this case. If any part of Sir Oliver touches a projectile or enemy, including the feathers on top of his armor, he takes damage. This wouldn’t be such a problem if he weren’t such a large sprite to begin with.

Stages can be played in any order and at any of the three difficulty levels, which should be labeled: way too easy, way too hard, and why would I even bother? As a self-proclaimed seasoned veteran of bullet hell shooters, I found myself having to resort to easy mode. The difficulty mostly comes the aforementioned hitbox size, and the fact that bosses are brutally difficult and even a challenge at times on the easiest difficulty. Most games have boss fights with a pretty recognizable pattern that gives the player a visual cue of an impending attack with time to react. That isn’t the case here. One particular boss, a giant frog, will quickly snatch Sir Oliver out of the air and chew him up, taking a large portion of his health with little to no time to try to avoid being attacked.

Upon running out of lives — a concept that should have died with arcades — you’ll be forced back to the level selection map and will have to either play the whole level over again or half of it depending on how far you made it. While it is nice to have checkpoints in most games, this is the only side-scrolling shooter I can think of with them, as most games just let you continue at the exact screen you’re at, costing you power-ups or score. Because of these checkpoints, you’ll have the displeasure of repeating the same parts of level multiple times, and who doesn’t like repeating entire sections of levels multiple times? Oh, that’s right, everyone.

Sir Oliver can be made to look left or right with the press of a button, which is useful as enemies can come from both directions, but the way it is implemented mostly kills the usefulness. Say you’re heading to the right and then enemies start to approach from your rear. Pressing the button to turn around to attack those enemies gives them time to approach and causes Sir Oliver to start moving towards them at the same time, thus allowing them to be right on top of him before he can even attack. Often times when battling enemies from both sides and maneuvering around the screen, I found myself unintentionally going the wrong direction, which isn’t something you ever want a player to experience.

Being able to turn back and go the way you just came from would be useful if the game weren’t an overall linear affair. I believe there was only one level that required a bit of backtracking to unlock one of the hidden runes found in each level that grant abilities, better states, and some lore. The runes aren’t really worth the time it takes to find them as the benefits are minor and the lore isn’t all that interesting. 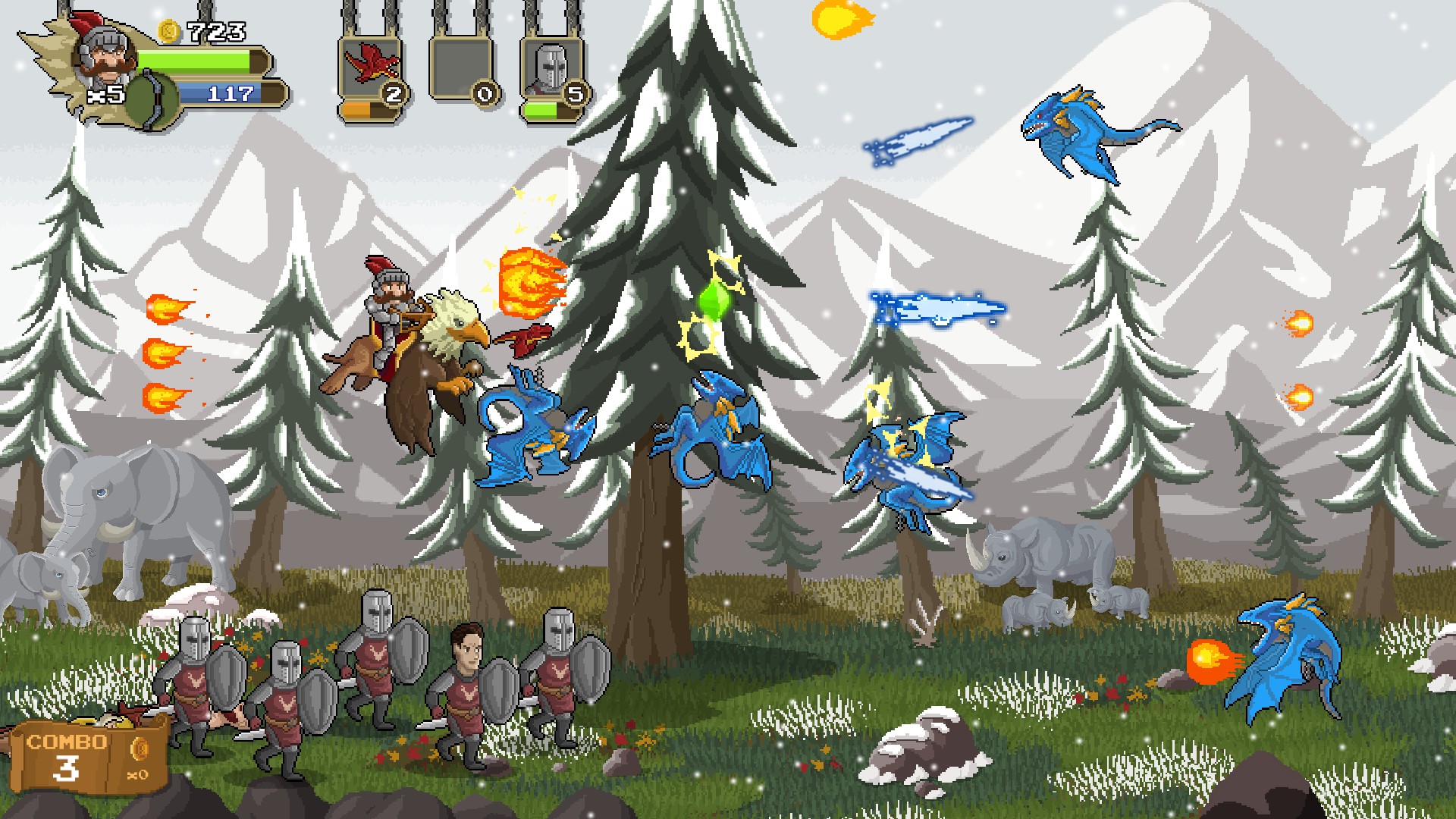 Each time a boss is defeated, you’ll gain another magical weapon that uses a bit of an automatically refilling magic bar. These weapons can be used alongside Sir Oliver’s trusty crossbow — which is automatically spammed by holding the designated button — and are vital to defeating larger enemies and bosses. They deal a considerable amount of damage after being upgraded. Upgrades can be purchased between levels from the gold earned by killing enemies, opening chests, and freeing prisoners in levels.

After playing for around five and a half hours, I found myself unable to afford most of the upgrades, even though I’d completed all of the levels because every time you die, you lose ten percent of your overall gold. Each time Sir Oliver gets hit by an enemy, his squires — miniature helpers purchased from the store — lose some of their power as well, making them mostly useless unless you somehow manage to never get attacked. Really, the punishments for getting attacked or dying in Gryphon Knight are far too extreme to allow the game to be enjoyable.

Gryphon Knight Epic isn’t a great looking or sounding game. It mostly feels like something you would expect to see in the early days of the original PlayStation; the sprites are all right, the backgrounds are bland and repetitive, and the music is forgettable. At one point, I found myself laughing out loud when I noticed a stage set in the snowy mountains with vikings had elephants and rhinos in the background. From then on I started to realize that each level had an enemy or two that just kind of didn’t feel like it fit there: a green blob that looked like a Metroid and a tentacled brain monster come to mind. It felt almost like the devs had created these sprites prior to coming up with the game and just decided to put them to use because they had them laying around. 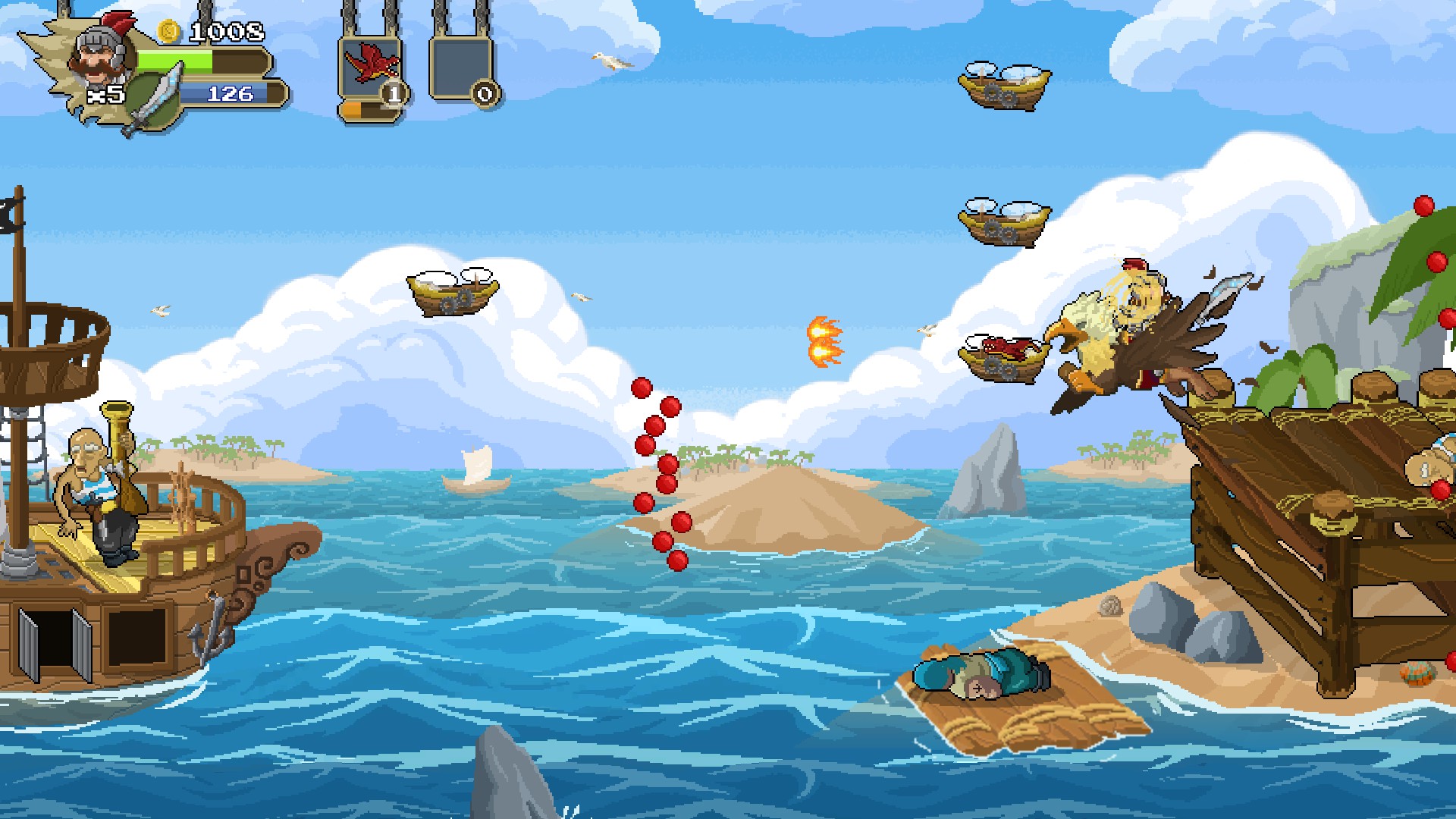 With hitbox resizing, the ability to move in one direction while shooting in another, and some difficulty adjustments, Gryphon Knight Epic could be an okay game. As it stands, it’s a messy medieval hodgepodge that you’d be better off avoiding at all costs. Save yourself some money by instead buying some feathers and a fake beak and putting them on your dog.