[Disclosure: Ashly Burch, one of the voice actors for Gravity Ghost, previously created video content for Destructoid. As always, no relationships, personal or professional, were factored into the review.]

Traditional ghost lore states that spirits remain in the physical realm when they have unfinished business. That trope applies to Gravity Ghost‘s protagonist Iona. Less common are ghost stories about soaring between tiny planetoids to collect stars. So that’s new.

It has been described in Internet shorthand as “like a 2D Super Mario Galaxy,” but past the physics of elliptical planetary motion there is not a lot of similarity. Where Mario keeps on his toes to avoid traps and enemies, Iona’s journey is a more zen-like experience of exploration and self-discovery. Gravity Ghost touches on some more serious themes and is more than just a platformer with unusual physics. 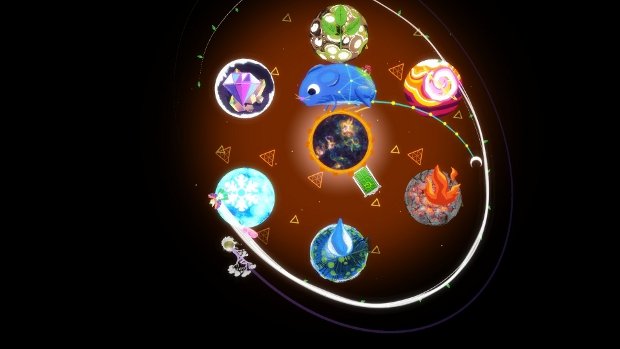 Gravity Ghost‘s initial gameplay premise is simple. On each level, Iona must touch a star then navigate to the exit. The main twist is that she does this in near orbit around tiny planets. She has some control while airborne (spaceborne?) but often must rely on gravitational slingshots to reach the furthest targets.

Over the course of the game, new types of planets show up to alter how a problem can be approached. Gas giants are bouncy, water planets can be passed through, hot planets repel Iona, ice planets are slippery, and gem planets are extra dense with stronger gravity. Eventually, Iona gains the power to terraform planets at will, changing them to suit her needs.

Iona also slowly gains other abilities that affect how she can interact with the environments. In addition to the ability to make small flight path tweaks, she eventually learns to increase or decrease her effective mass, boost her speed, double jump, and even pass through solid objects.

The control upgrades are a huge boon for the later levels. When there are a lot of different planets on screen, each has its own gravitational pull (and possibly other effects depending on the planet type) on Iona, and it can be difficult to predict exactly how she would behave unassisted. Even at the end of the three-hour campaign, there were a few levels that I did not fully understand, but was able to get through by skillfully using all of Iona’s tricks.

Punctuating the outer space platforming gameplay are in-game conversations and flashback cutscenes. Gravity Ghost begins with Iona as a ghost losing her fox friend Voy and trying to find him. The flashbacks show her alive, and a big part of her coming of age involves reliving those memories and discovering how she transitioned to the realm of the dead.

Though the “ghost with a mission” and “coming of age” tropes are common, the narrative carve out its own niche. It ends up being a genuinely touching tale of growing up and accepting responsibility. I got a little misty-eyed when it wrapped up, but I’m a sucker for stories about people with canine companions.

Though the serious stuff is the most powerful, Gravity Ghost doesn’t maintain that tone throughout. Most of the narrative follows Iona before she realizes her purpose. During that time, she is insubordinate, aloof, and prone to make a poop joke. Her demeanor is a little jarring at first because the central theme of death is usually treated with more gravity than Iona gives it, but her carefree attitude serves to highlight her growth as a character. In the beginning, she is very much a child, ghost or not. 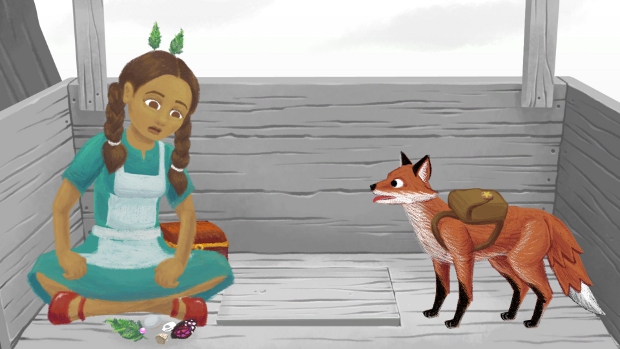 The power of the narrative is bolstered with great vocal performances from Ashly Burch, Logan Cunningham, and Sarah Elmaleh. Burch nailed Iona’s growth, playful and defiant in the beginning to mature and sober in the end. Though the cast did a fine job overall, the voice work suffers a bit from how few actors were involved. There are scenes where Burch is talking to herself through two different characters, and even with separate intonation and speech patterns it takes players out of the moment.

Visually, Gravity Ghost is pleasing. The use of vibrant color for characters and planets contrasts beautifully against the stark backgrounds of deep space. Iona’s hair in particular deserves a nod. The way it trails behind her encourages movement; I often found myself trying to maintain a stable orbit just to watch the effects. The bumpy, drawn-on-canvas style works well most of the time, but starts to look a little messy up close. Though it is not obvious in still shots, character animation can be a little robotic at times.

Ben Prunty’s soundtrack merits praise not only for its general quality, but also for fitting the feel of Gravity Ghost well. With Gravity Ghost partly set in space, it makes sense that some of it sounds a bit like the FTL: Faster Than Light soundtrack, with echoed electronic tones over a flowy, atmospheric base. There is more variety here, with tribal beats behind Iona’s conversations with animals and sweeping piano tracks during some flashbacks. 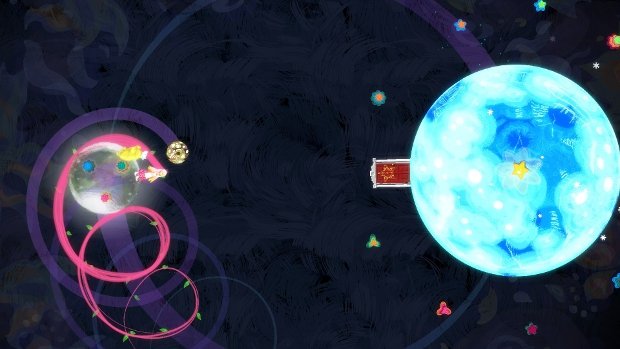 Overall, Gravity Ghost is pretty great. The gameplay exists in an odd space where it would require appreciable skill in order to play it well, but does not feature any sort of punishment for playing poorly. Though it only rarely can be described as difficult, it can still be satisfying.

The story it tells is heartfelt and relatable despite ostensibly being about a ghost who orbits tiny planets in search of giant animal spirits. At its core, it delivers a narrative about a young girl having to grow up even though she might not want to. Her journey is intensely human, even as she zips past a sun with her brightly-colored hair trailing behind.

[This review is based on a retail copy of the game provided by the developer.]