Are you not entertained?

Right now, as I’m typing, my arms are noodles. They ached yesterday, they ached today, and they’re gonna ache tomorrow. I get so focused that I don’t even realize how sore I am until it’s too late.

If you’re a PlayStation VR owner, you too can know the pain that follows a hard-fought victory against hordes of meaty men who will stop at nothing – and I mean nothing – to clobber you to bits. Gorn has been cracking PC VR players up for years, but it’s only now becoming available to the PS4 populace. 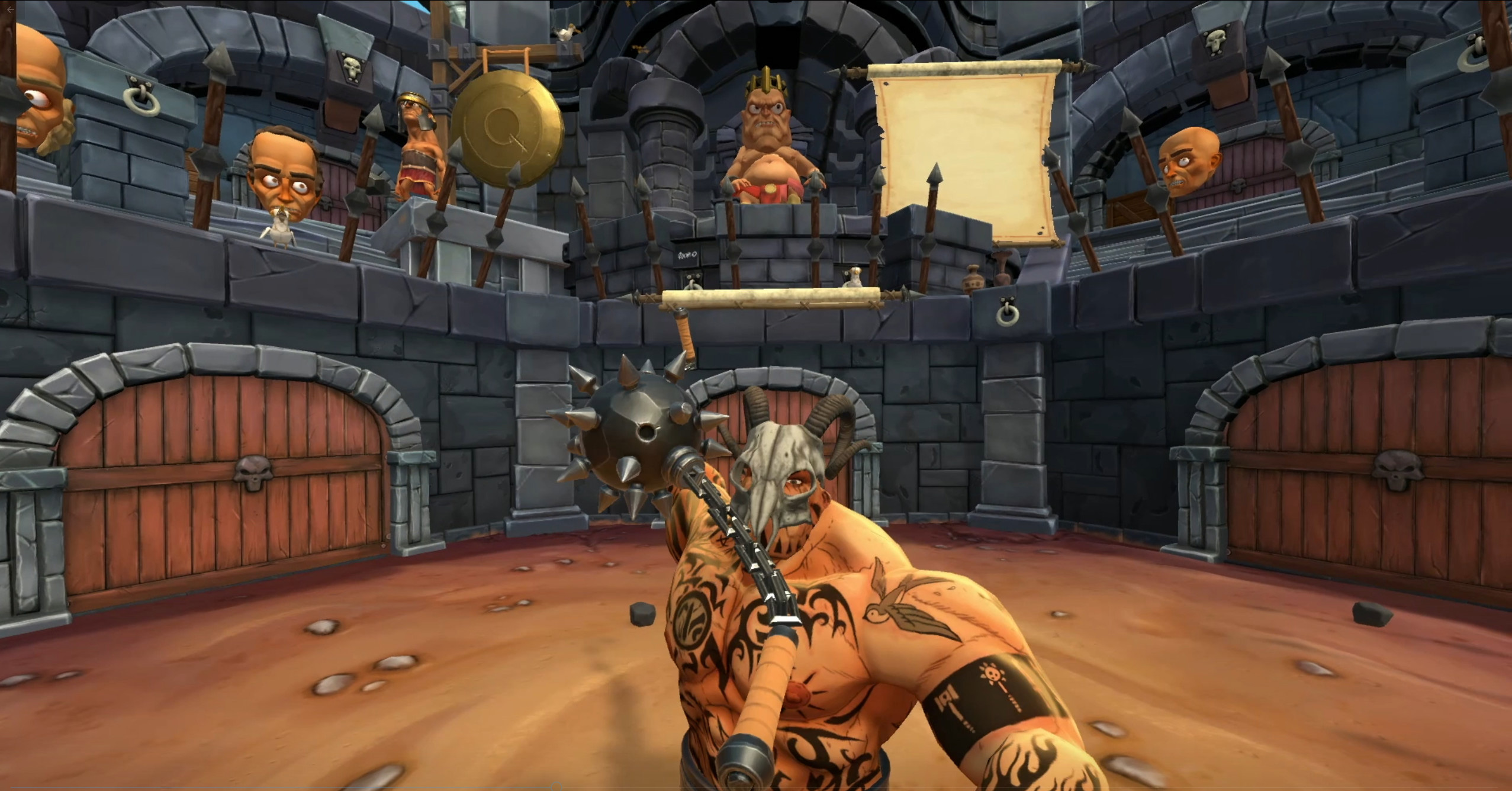 The main point I want to get across is that Gorn is (probably) more interesting than you’re expecting based on a gut-reaction glance. I think that’s fair to say. VR gaming has seen so many by-the-numbers arena fighters and shooting galleries that lack ambition and only offer surface-level fun at best. It’d be easy to write this off as another one of those titles without looking any closer. Don’t be too hasty!

Gorn isn’t exactly revelatory – especially not as the medium reaches new heights with substantial narrative games like Half-Life: Alyx – but it is a joyful reminder of just how entertaining interactions can be in a virtual setting. Gorn‘s wow factor is found in its absurd weapons, not its structure or story.

You might have a shield in one hand and a morning star in another. Or you might prefer a ranged approach: either a two-handed bow (that you semi-realistically draw and release) or a wrist-mounted crossbow. Of course, the hammer has its uses too – it’s great for smashing armor plating – and there’s something to be said about swinging a massive two-handed flail over your head like a maniac.

The weapon list only gets wackier as you barrel through the main-story levels, all of which are constantly giving you new playthings. By the end, you’ll have fended off snarling badgers, yanked soldiers’ arms off with clamping crab claws, and sliced and diced with extendable Wolverine claws.

I thought Gorn would be mindless in a “smack everything until it stops moving” sorta way – and when you’re caught up in a free-for-all with several other gladiators, it can be – but there’s depth. If you’re struck even once, you’ll have to race to finish a kill before you bleed out, and when your foes are armored up, that’s much easier said than done. I felt like I really had to land hits strategically.

It’s funny how surprisingly threatening these silly muscle men can feel in the game. I’ll be the first to admit that they look wonky as hell when you don’t have a headset on, but in the virtual arenas of Gorn, when a few dudes are booking it toward you, your fight-or-flight response is bound to kick in.

A large part of that oh-shit panic stems from the unusual movement system.

You’ll need two PlayStation Move controllers for Gorn – not just for two-handed weapons, but for simply walking around, too. Imagine stretching your arm out, holding your thumb down on the big Move button in the middle of the controller, and then pulling your arm close to your chest. Picture it again, except faster. Again and again. Now in reverse. That’s how you move. In other words, it’s as if you’re grabbing hold of the world and pulling yourself forward (or pushing backward) to dip in and out of harm’s way. (This is the part where I remind you that Gorn is a good way to get your heart pumping.)

Left and right camera turns are performed with the face buttons (you can pick between 45-degree, 90-degree, and smooth turns), and you’ll use the trigger-like T buttons to either make fists or hold items. It’s a lot to keep track of, I know. For the most part – basically up until near the end – it’s manageable.

The PlayStation Camera does a surprisingly okay job of tracking the Move controllers when it comes to swinging weapons and firing projectiles. It felt accurate enough. That said, it struggles to keep up with frantic rapid-fire attacks, and the intensive movement system is less than ideal, to put it mildly. 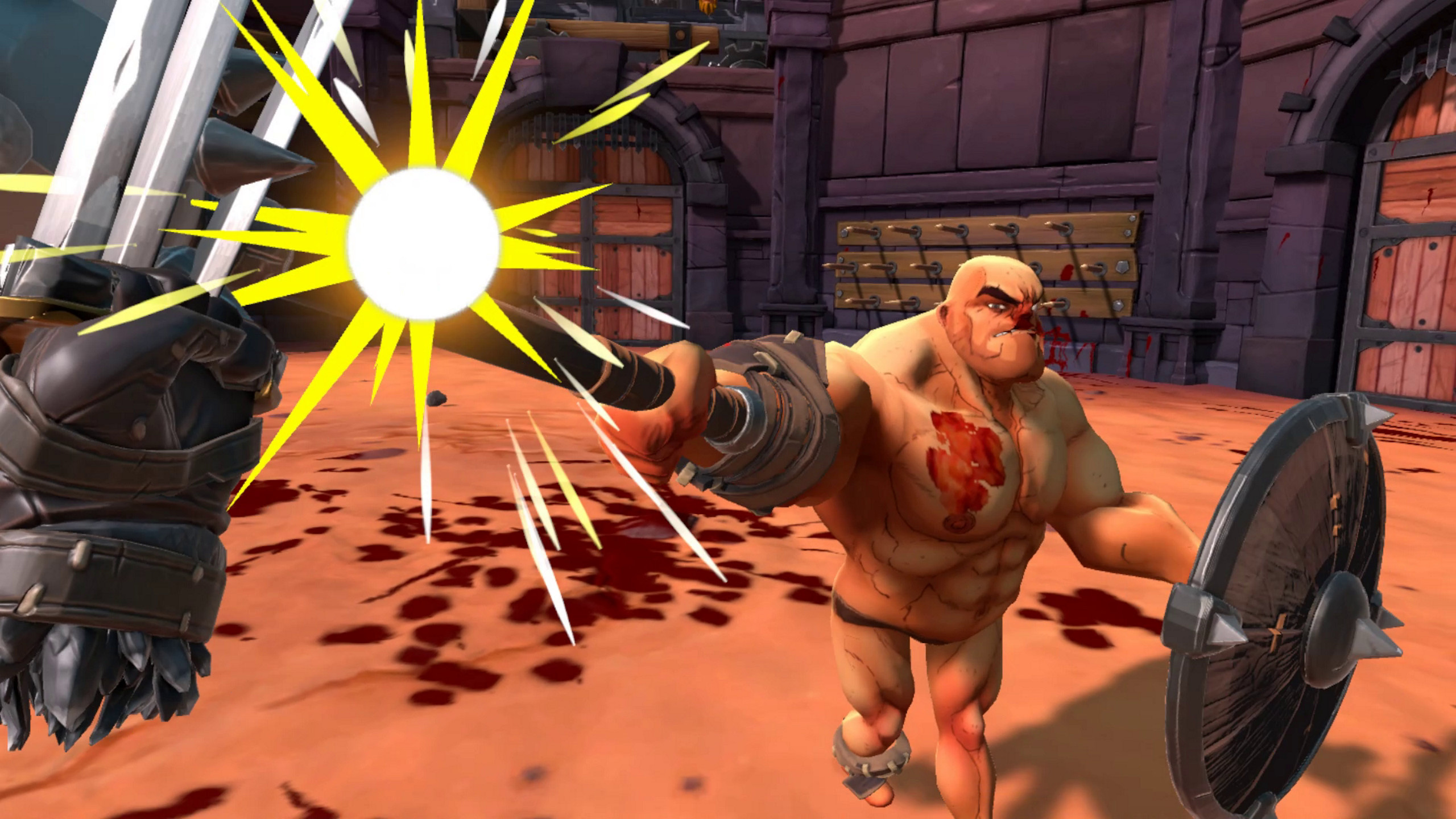 During the final few levels, it seemed like the aging tech couldn’t quite keep up with what the game was asking me to do, and as a result, some of the gaps between checkpoints felt way too long. I had my share of frustrating moments, especially while facing bosses with highly specific weak-points. Still, I’d recommend it, flaws and all. Unavoidable controller constraints aside, I enjoyed my time overall.

Gorn is up there with Superhot as a flashy intro-to-VR experience for people who don’t have their own setup at home. It’s something you can boot up in a group setting and share a bunch of laughs over. Granted, it’s a super violent game in which limbs are lobbed off left and right, but there is a candy-spewing Piñata Mode, so kids can get in on the bloodlust. I appreciate that all-ages concession.

Beyond the several-hour-long level-based campaign, there’s an endless survival challenge and a custom arena with all kinds of options including a god mode, slow-mo, weapon toggles, and more.

Even though the PC version is unquestionably the ideal way to play Gorn, the PlayStation VR port is commendable, and I’m happy it exists. It won’t blow you away – especially not in 2020 – but it’s worth adding to your VR library the next time you want to let off some steam. Invite a few pals over.