Yes, I know, this review is ridiculously late.

But … for fans of the first two Golden Sun games on the Game Boy Advance that have been looking forward to this anticipated, yet quietly-released Nintendo DS sequel, this review being late is a good thing.

You see, Golden Sun: Dark Dawn is a huge game. This is not a lazy, quickly put-together sequel to appease fans who have been clamoring for a new game in the series for years. This is a fully realized, super robust RPG that feels about as long as the first two Golden Sun games combined.

So, yeah. This review is late because the game took me a really long time to complete.

But was that long time (40+ hours!) spent playing a worthy follow-up to the cult-tastic previous games in the series? Or did I just waste a lot of great holiday gaming time on something ultimately disappointing?

At the conclusion of the last game in the Golden Sun series, The Lost Age, the heroes of the first two games activated the healing power of the Golden Sun, saving the world of Weyard from decay and certain destruction. (For non-fans of this series that decided to still click on this review you probably have no idea what I am talking about.)

While this would normally be a good thing, releasing the all-powerful, elemental-based force of Alchemy on the land completely changed the world: continents shifted, towns crumbled, and new monsters were born. While the heroes were praised by some for saving the world, others criticized them for releasing a force that may have never been meant to be released.

Golden Sun: Dark Dawn begins thirty years after this magnificent, yet cataclysmic event, as a new set of heroes sets out to investigate some mysterious happenings in the newly formed world. 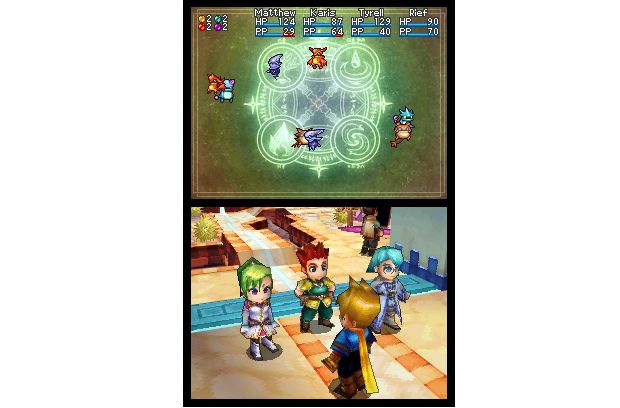 In a clever twist, you take on the role of main character Matthew, son of the original game’s heroes Isaac and Jenna. In fact, the three characters in your party at the start of the game are all sons or daughters of the heroes from the first two games.

And this is something I have always loved and respected about the Golden Sun series. Instead of each game being a completely new story with completely new characters (like Final Fantasy), each game continues an epic story and involves similar characters and locations that all exist in the same overall world.

While some may think this would be boring — visiting the same places over and over again — I find it all very interesting. Following around a set of characters (and their offspring!) in an ever-changing world is fascinating. It helps the world feel alive, and makes running into old characters from previous games both surprising and exciting.

Upon starting Golden Sun: Dark Dawn, I was instantly a fan of the three main characters Matthew, Karis, and Tyrell, if only because I had got to know their parents so well in the previous two games.

But as I started playing the first two hours of Golden Sun: Dark Dawn, I was worried I wasn’t going to like the game.

And that made me sad.

The first two hours of Golden Sun: Dark Dawn is a lot of dialogue and a lot of battles.

And as much as I love the world of Golden Sun, the battle system is initially a little overwhelming and, frankly, a little boring. 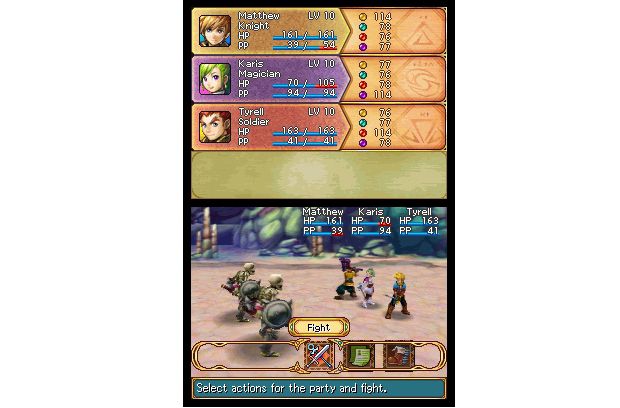 Utilizing a turn-based system activated by (old school alert!) random battles, Golden Sun: Dark Dawn has you selecting from a large menu of options to battle a variety of monsters with various difficulty levels.

As traditional and familiar as this all sounds, the problem lies in the way the battles play out. While players can select from classic Attack, Defend, and Magic (in these games called “Psynergy”) choices, the main focus of the Golden Sun series lies in the Djinn, Pokemon-like creatures that can be called upon to perform special moves in battle.

Collected around the world either in random battles or by finding them in hidden places, the elemental-based Djinn have two functions. Each playable character in the game (of which there are more than you might think!) can carry up to nine Djinn at once, each having its own special skill — one may unleash a basic attack, one may heal the party, while others offer special bonuses that boost your strength or defense.

In battle, each Djinn can be activated from the menu. Once used, the Djinn puts its power into a “summon pool” (as I like to call it). Once this “summon pool” collects a certain amount of a specific elemental-type of Djinn, a massive creature can be summoned. And these creatures are what help you the most in almost every battle (eventually the Attack and Psynergy selections become almost completely underpowered).

And therein lies the problem. With so many options to choose from in battle, things don’t flow as smoothly as they should. Say you want to build up your “summon pool” enough to summon a massive dragon, and this dragon takes four Wind Djinns to call. Depending on what Djinns you collect in the field, all the Wind Djinns you have to use to summon this dragon could be completely useless (i.e. revive a party member … when no one is dead) and therefore basically amount to you wasting four turns in a row just to get those Djinn into your pool.

If all of this sounds confusing and kind of annoying, it is.

And the first two hours of Golden Sun: Dark Dawn doesn’t involve much more than dealing with this strange, not very exciting battle system (in between some pretty long cutscenes).

Because of all this I was a little turned off. 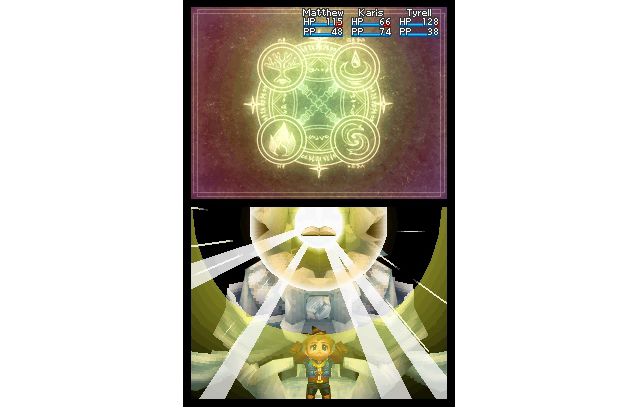 But, luckily, things turned around rather quickly.

Once you get used to the battle system — and start to collect more useful Djinn — the battles become pretty fun, and not nearly as tedious and slow.

And once you really start journeying around the world, you immediately realize that the battles become a secondary part of the game. The real focus of the game is exploring the world and solving some surprisingly clever puzzles.

Unlike most RPGs, Golden Sun: Dark Dawn puts a heavy emphasis on the exploring and puzzle-solving you do outside of battles. Instead of just walking around, occasionally talking to people and buying equipment between battles (don’t worry, you still do that stuff as well), the game tasks you with entering enormous, complicated dungeons filled with puzzles and traps straight out of the Zelda series. 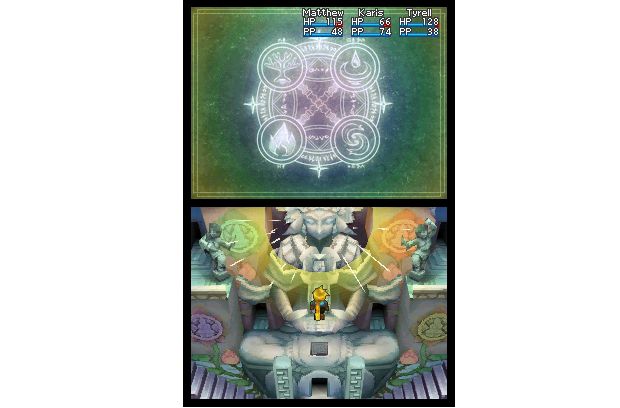 Since all the Golden Sun games are based around elemental Psynergy, each character is equipped with different elemental powers that can be used in or outside of battle. In battle, these powers come across as generic spell attacks, but outside of battle they are so much more.

The “Growth” Earth-based power, for example, can grow vines and open up new paths when walking around the enormous and varied world of Weyard. “Move” can push giant blocks, while “Fireball” forms a massive fireball that can do many different things (from lighting torches to burning away the roots of trees).

Once you start exploring these dungeons, the game goes from a competent, if rather traditional RPG to one of the genre’s most engrossing and clever offerings. And as the lengthy adventure continues, the dungeons, Psynergy powers, and puzzles only get better and better, culminating in one of the best-designed and satisfying final dungeons I have ever played in any role-playing game. Great stuff!

So, I guess the moral of this review is to not judge the game based on the first couple of hours alone. Just keep in mind that it only gets better as the game goes on. 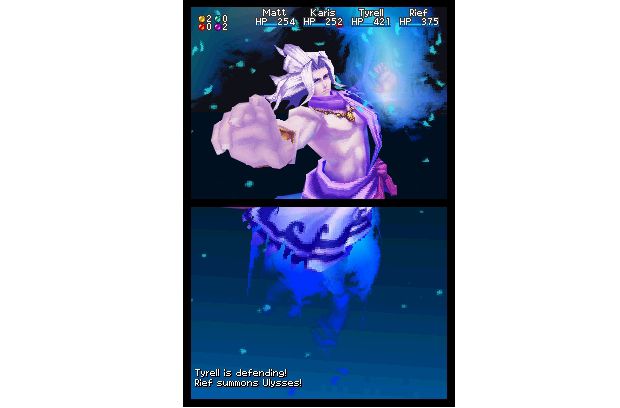 In addition to the remarkable puzzles, the game also looks and sounds fantastic. While a lot of “3D”games on the DS leave little to be desired, Golden Sun: Dark Dawn’s rich color palette and strong texture work make it one of the better-looking games on the Nintendo DS. I thought I would miss the classic 2D look of the original Game Boy Advance games, but after journeying through an increasingly gorgeous Weyard, I quickly forgot about the old games and was happy Camelot went in a new visual direction with Dark Dawn.

It is also worth mentioning that the summons in the game are not only out of control and over-the-top, they are absolutely breathtaking. I may go so far as to say the numerous different summon animations are some of the best (and most elaborate) I have ever seen in any RPG, even rivaling those seen in classics Final Fantasy VII and Final Fantasy VIII.

After some initial hesitations, I grew to love Golden Sun: Dark Dawn. The game is polished, well-designed, and, for fans of the series, surprisingly moving in parts. Camelot has finally seemed to perfect the slightly flawed Golden Sun design with Dark Dawn, easily making it the best of the series.

Golden Sun has a very cult-like following — since this review is so late, I am assuming all the fans of the series have already picked it up.

But for the people who still have not got around to purchasing it, there is no need to hesitate. With the 3DS set to take over the handheld world in a few months, Golden Sun: Dark Dawn may just be the last great RPG for the legendary Nintendo DS.