It’s the early 21st century and humanity is embroiled in a bitter war with an alien race hellbent on stemming mankind’s advance into outer space. You are a mech pilot. You pilot a war machine that’s enormous and powerful. Aliens shoot at you, and you are probably going to need to dodge some bullets and shoot back.

It’s an age-old story, one that’s probably not going to win many accolades, and that’s okay. Sometimes it’s just fun to bomb around a distant planet and blow up everything in sight. 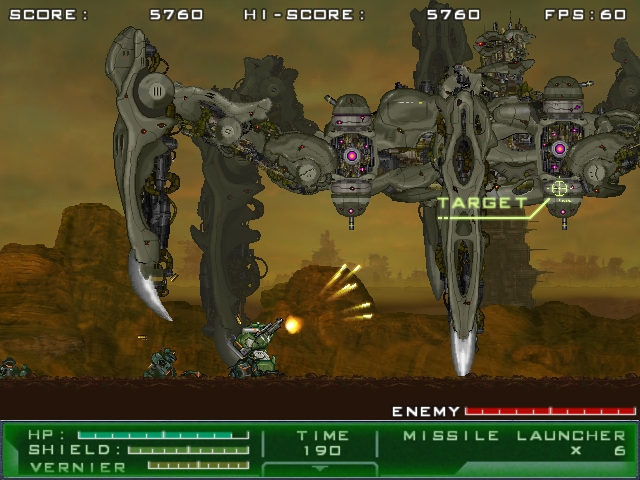 Gigantic Army is a throwback to the mecha shooters of the 16-bit era. A heartfelt tribute to the likes of Cybernator and Metal Warriors, it certainly wears its heart on its sleeve, paying homage to the classics by crafting a faithful pastiche that wouldn’t have looked out of place sharing shelf space with the genre’s paradigms twenty years ago.

Much of what makes this action-heavy side-scroller so delightful is the GMR-34 Saladin itself. A manned combat robot packed to the gills with heavy artillery, it walks a fine line between handling well and seeming like a lumbering war machine. Simultaneously weighty and motile, the leaden suit of armor just feels exactly how you’d want a massive legged vehicle to feel.

The arsenal you take into battle is up to you. Prior to charging into battle, players must select a primary and heavy armament. There are three of each, making for nine potential combinations to support a variety of play styles and skill sets. The Saladin also possesses a devastating melee weapon, should any unfriendly natives ever get too close for comfort. There’s also a valuable shield ability and a set of vernier jet engines, which allow you to soar into wild blue yonder for a brief time. Well, it would if the sky wasn’t always such a rancid shade of green.

Apart from the anomalous platforming section where the focus is circumventing a minefield, the experience largely focuses on trudging across the game’s six levels and laying waste to anything and everything along the way. Common enemies don’t pose much of a threat and can be quickly dispatched or avoided. However, the real focus is traversing these obstacle courses whilst taking as little damage as possible. You’ll need to save that previous health and heavy munitions for the treacherous minibosses and colossal foes that await at each stage’s close.

You can’t be too cautious though. Just as dangerous as the enemy forces is the clock. A timer constantly ticks away, encouraging players to press ahead, lest risk a fiery death. Should time run out prior to the completion of a level, any remaining health reserves quickly evaporate and then, well, you suddenly explode for some reason.

After meeting my maker once in such a fashion, the dwindling clock weighed on me greatly. The feeling of being caught between a clock and a hard place lends the game a tense of tension, wherein players are forced along a tightrope. One must remain even-keeled, but with a touch of recklessness. It’s a balancing act, avoiding oncoming fire and returning the favor whilst being mindful of how much time remains and how that should impact your strategy. There’s a nice sense of risk and reward to it all. 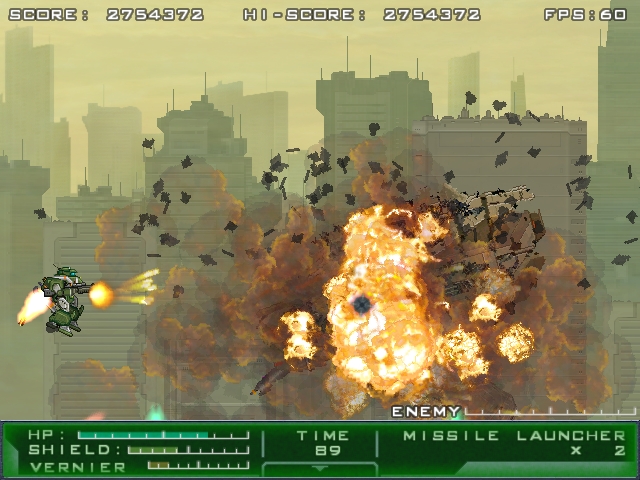 Gigantic Army generally handles pretty well, boasting inputs that can be customized at your leisure. Though, I should note that I encountered some issues pulling off the dash move reliably with a gamepad and special special weapons seemed to go off at random on occasion — minor gripes that didn’t have a great impact an otherwise phenomenal experience.

At just six levels long, the duration is fairly short. Experienced players should be able to clear the campaign in about half an hour. That said, you likely won’t be doing that on your first attempt and much of the enjoyment comes from replaying the title and testing your mettle against increasingly more challenging difficulty settings. Personally, I’ve gone back through it again and again because the game is such a joy.

The story is the real weak link here. Told through scrolling text diaries reminiscent of those in Konami’s 1993 shooter Cybernator, the narrative breaks up the action with banal exposition that isn’t interesting or engaging int he slightest. It robs from an otherwise sterling product, as words flit down the screen amid dead silence. That’s the worst part. The music just stops and you get to look at a journal and some cigarettes laying on a desk. 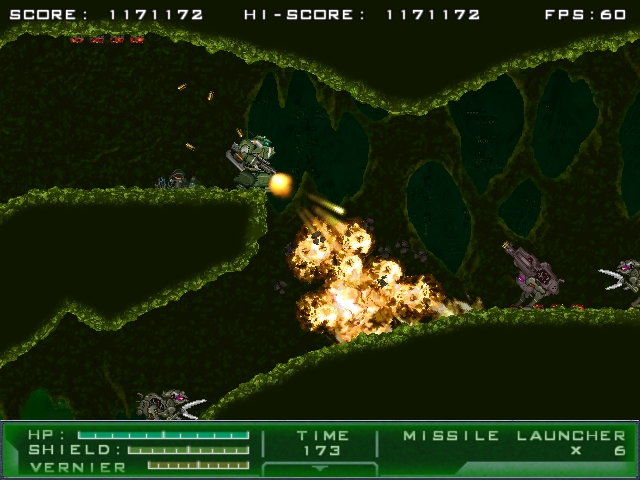 The music isn’t all that great, mind you, but it’s better than absolutely nothing. Another weak spot in an otherwise stellar package, the soundtrack merely serves to fill the dead air between explosions — there’s nothing terribly memorable about it. It does the job, but it’s certainly nothing you would want to listen to on its own.

In the end, Gigantic Army is a breezy retro-style shooter that STG enthusiasts would do well to check out. The tiny doujin team at Astro Port have created something special, hearkening back to the games of yesteryear with a well-crafted dose of nostalgia. Considering the modest asking price and the overall quality of the package, there’s no reason to be gun-shy over this mecha shmup. Go on, pull the trigger.