Giana Sisters is a game that generally incites one response: plagiarism of Super Mario Bros.

When Black Forest Games launched its Kickstarter campaign for Project Giana back in July, the intention was to provide gamers the chance to celebrate the 25th anniversary of Giana Sisters with a unique new game. As one of the first Steam Greenlight games released, it’s finally here for us to see Giana all dolled up and ready for her graduation. 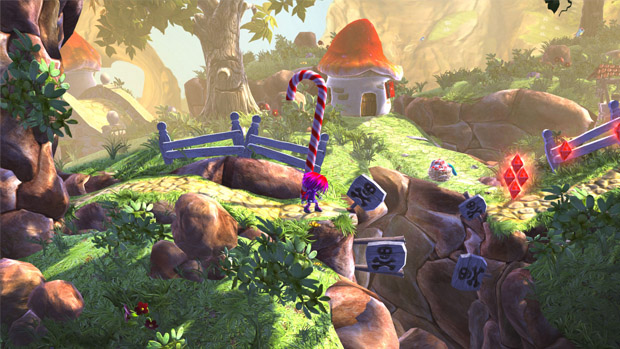 Black Forest Games has kept a firm stance on its approach since launching the campaign to have the game formerly known as Project Giana released: to create something unique and exceptional, giving Giana a game that truly feels like her adventure.

Giana, now a teenager, is drawn into her dream alongside her sister Maria, and they have become separated. It’s up to Giana to save her sister and escape her dream, but Giana is now grown up — she is no longer scared of her nightmares and hates the cute, sugary dreams she once used to love.

So in the center of Giana Sisters: Twisted Dreams, you’ll find the dream-change mechanic. At the touch of a button, Giana will switch between her twisted nightmare and cute dream, and depending on which she inhabits, she’ll also change her persona. In the twisted dream, “Cute” Giana will twirl and dance her way through the scary world filled with demons, while in the other, “Punk” Giana will bring her fire dash and aggressiveness out to combat the cute owls and sunshine.

Switching between these personas is essential. As the dreams mirror each other, obstacles and routes will appear depending on which dream you inhabit, requiring you to switch on the spot to progress or figuring out the best approach to switching between the abilities of the different personas.

Some spots call for “Punk” Giana to dash and bounce off walls and enemies, while others call for “Cute” Giana to twirl and glide through the air; there’s a good amount of puzzles to solve. At certain intervals, boss battles will appear, also requiring things to be switched up to defeat them. Think Donkey Kong Country 2 and its tag system, just with less monkey business. 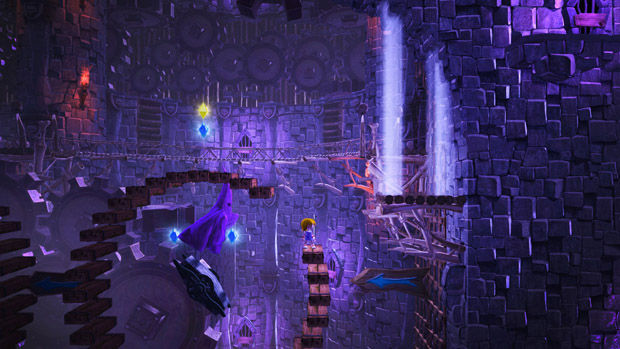 The difficulty increases steadily as progress is made, and Twisted Dreams also allows for players to go at their own pace. For those who enjoy exploring and treasure hunting, the stages are vast and feature numerous routes. For those who just wants to jump and run, the game still packs a challenge. On a standard run through, it’s about 5-6 hours to get to the very end, so it feels a bit on the short side despite its 23 levels however.

Throughout each stage, there are also several hundreds of crystals. The blue ones can be picked up by either Giana while red are obtainable by “Punk” and yellow are specific to “Cute.” Reaching these different colored crystals often requires some strategy of interchanging the worlds to reach. Giant mega crystals are also scattered around to be found and collected for secrets.

Stages are also able to be replayed after completion to find all the crystals, and extras are rewarded after each stage depending on how many you found and the number of times you died. Some of the secret crystals are damn hard to find, so expect to revisit quite a few of the stages if you want a perfect score. 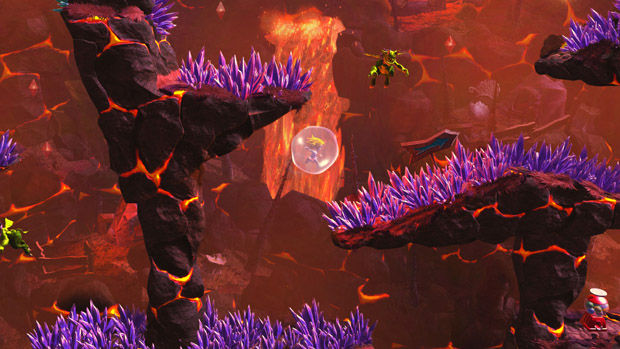 Several new modes can be unlocked based on your completion rate — “Time Attack,” “Hardcore,” and “Uber-Hardcore” — upping the ante and giving you only one shot at clearing a stage, or be sent back to the beginning. A gallery mode is also unlockable.

The controls are very responsive, and feel natural once you pick the controller up. Using an Xbox 360 controller, the button layout is properly balanced out to make all the abilities accessible without too much thought or practice, and sign posts on the first few stages will help you get the hang of things. With a keyboard, it’s a bit more tricky to get the timing down however, and several sections require some finicky maneuvering that’ll bring back memories of the submarine stages of Earthworm Jim so you’re really better off using a gamepad to fully enjoy the game.

Great Giana Sisters was most famous for its soundtrack by Chris Hülsbeck back in the day, and they brought him back for this to go full circle. Like the dreams, the music will also change when the switch is made. The twisted world features Chris Hülsbeck’s new arrangements and compositions, while the cute features a metal rendition of these tracks by the band Machinae Supremacy. It’s a bit of a risky move to constantly have music change on the fly, but thankfully, they spent time balancing out the arrangements — the switch is done with a subtle cross-fade. It’s a really great soundtrack, made all the more interesting by it being dynamic and interactive, though it would have been nice to see some more new compositions. Overall, the quality of the soundtrack isn’t too hampered by this due to the strength of the music that is in the game.

Graphically, the game packs a visual punch and is really aided by the dream-twist mechanic. At the touch of the switch button, the scenery will come alive and transform itself before your very eyes, and changes are made as far as the eye can see. This attention to detail makes the game very fun to interact with, as castles and mountains will grow from the ground in the twisted world, while nature and rivers will flow through the screen in the cute world. The later stages feature some very nice lighting effects, and the textures are clean throughout. The art style is a tad inconsistent between some of the enemies, however, and can range from strangely realistic to overly cartoony. 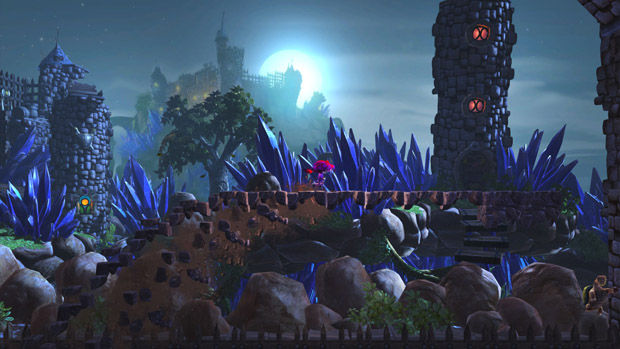 The graphics also introduce some of the game’s more frustrating points, the most apparent being the lack of distinction between foreground and background. Enemies don’t always stand out from the vivid scenery, leading to deaths that feel cheap. Another issue is the fact that certain hazards come to life when the switch between the worlds is made, and might spring up right beneath you, or remain hidden behind a piece of foreground objects. Although it’s not too often this happens, it certainly will at certain moments, which will undoubtedly cause some gritting teeth.

But issues aside, it is a rather wonderful little platformer at a great price that brings back the joys that were had some 20 years ago. It might not satisfy the needs of action gamers, but for those who appreciate a classic style platformer with plenty of challenge and responsive controls in the vein of Donkey Kong Country and Genesis-era Sonic the Hedgehog, it’s an essential purchase, with plenty of history attached and an ironic twist of fate by breaking new ground with Steam Greenlight and Kickstarter.