I’m just going to come out and say it: Sucker Punch is underrated as hell.

I know. Infamous got a lot of love back in the day, but as far as the sequels (and the standalone games) are concerned, not enough love. Also, Sly Cooper remains one of the greatest mascot treasures in all of gaming, and you can’t convince me otherwise.

But if all of those didn’t manage to put Sucker Punch in the same conversation as a lot of other studios, Ghost of Tsushima will be the tipping point. 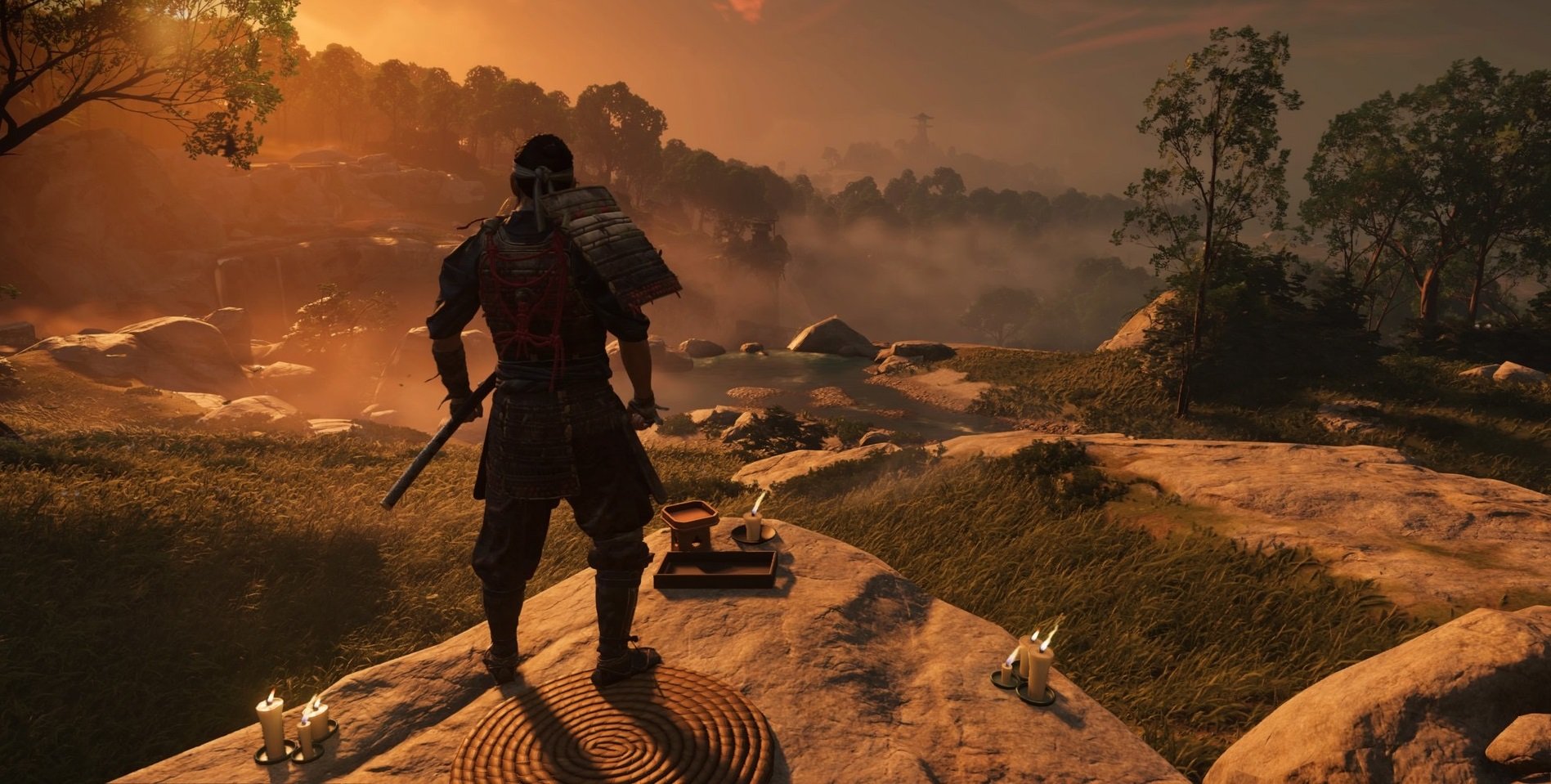 Ghost of Tsushima wowed me from its opening moments. I can’t stress enough: this is one of the most incredible-looking games I’ve ever seen, and not just from a technical standpoint. Ghost is somehow moody, yet idyllic. Bloody and dangerous, yet calm and serene.

Waking up on the battlefield of Tsushima to find his people massacred at the hands of an invading Mongol army, samurai (and noble) Jin Sakai is foisted into a good old fashioned revenge tale. While it seems like a surface-level conflict, the setup is frankly genius, allowing the narrative to blossom alongside of the player. Jin morphs into the persona of the “Ghost,” the potential savior of Japan, but his lineage provides us with a firm background that informs his character’s motivations.

Watching it all unfold with Japanese audio (English is available) and in an optional black and white “Kurosawa mode” filter is glorious. Sucker Punch pays homage to classic Japanese cinema throughout the game’s 30-ish-hour runtime.

That filter — and the rest of the game really — sings in HDR, right down to details like individual leaves cascading across the screen. Amazingly, Sucker Punch also kept the load times down to a minimum, as they range from five to ten seconds (sometimes less) when transitioning between fast-travel locations. PS4 Pro owners have the option to swap between a performance-based mode and a visual-first toggle, but I kept it on the latter the entire time and didn’t notice any major framerate drops. In many ways, coupled with the fast load times, it feels like the culmination of current generation tech.

While this is a “call your horse with a button and roam the open world” game, Ghost of Tsushima allows its personality to augment that seemingly rote framework. It starts out a bit clunky, with a limited moveset and light traversal options, but once you get into the main loop, everything comes together.

You know that boring breadcrumb trail that’s in most games? Well Ghost reinvents it, with a flowing wind effect that points you in the right direction while wildly altering the environment in front of your eyes. I’ll never get tired of it and now I want it in pretty much every game: it’s tough going back to busy objective markers that gum up the HUD.

The rhythm of combat is also a sight to behold. Resolve (think of it as MP) fuels your healing and your skills, allowing an interesting balance between defense and offense. The crux of the action is housed within the timing-based parry system, as well as the need to dodge unblockable attacks (reflected by a blue and red glint, respectively). It’s the standard for a lot of action romps, but I respect it, especially after it opens up.

Ghost of Tsushima slowly ramps as you acquire new stances, dancing between them to counter enemies who sport shields, spears, and swords. You also manage to feel powerful at the start even with a low health bar and no tricks, as the parry system provides you with most of the tools you need to survive. Adding in extra ninja stuff, more stealth options, dodging, and brute-force techniques help you customize Jin’s playstyle to your liking, though. 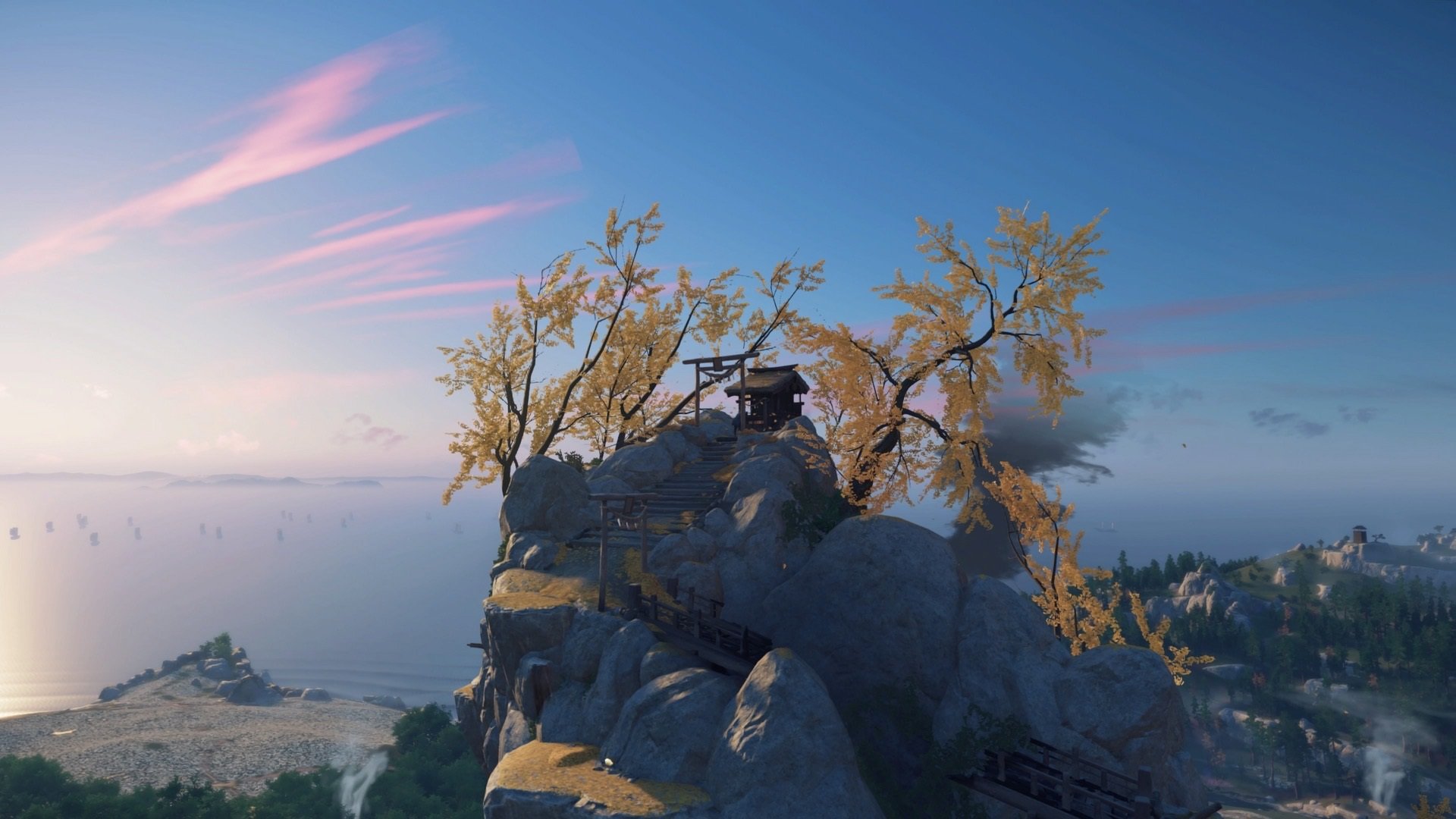 Like the small open-world nuances, combat blossoms over time. The insta-kill standoff sequences are fitting given the cinematic samurai theme, but are also functional ways to approach combat head-on if you aren’t big on the whole stealth thing (very few missions require a “no alarm” stealth parameter).

Outside of fighting, you’ll also find open-world locations that grant bonuses that require you to compose a haiku first. Or reflect on certain story beats while bathing in hot springs. It’s all very unique and helps break the chains of most open-world checklist garbage. Sucker Punch embraces this philosophy inside and out, as the HUD follows a minimalist design by default.

Ghost of Tsushima kept me interested throughout the course of its entire campaign, but there are plenty of story-based side missions and extras to uncover. The map isn’t obnoxiously big — though there are a lot of collectibles — and the genuinely speedy fast-travel system helps move things along. The dual audio and multiple difficulty settings also nicely tee up extra replays.

With Ghost of Tsushima under its belt, Sucker Punch deserves to be in the same conversation as Insomniac, Naughty Dog, and Sony Santa Monica. If this generation is to wrap up soon, it’s fitting that it’ll end with Tsushima: one of its most beautiful games thus far.