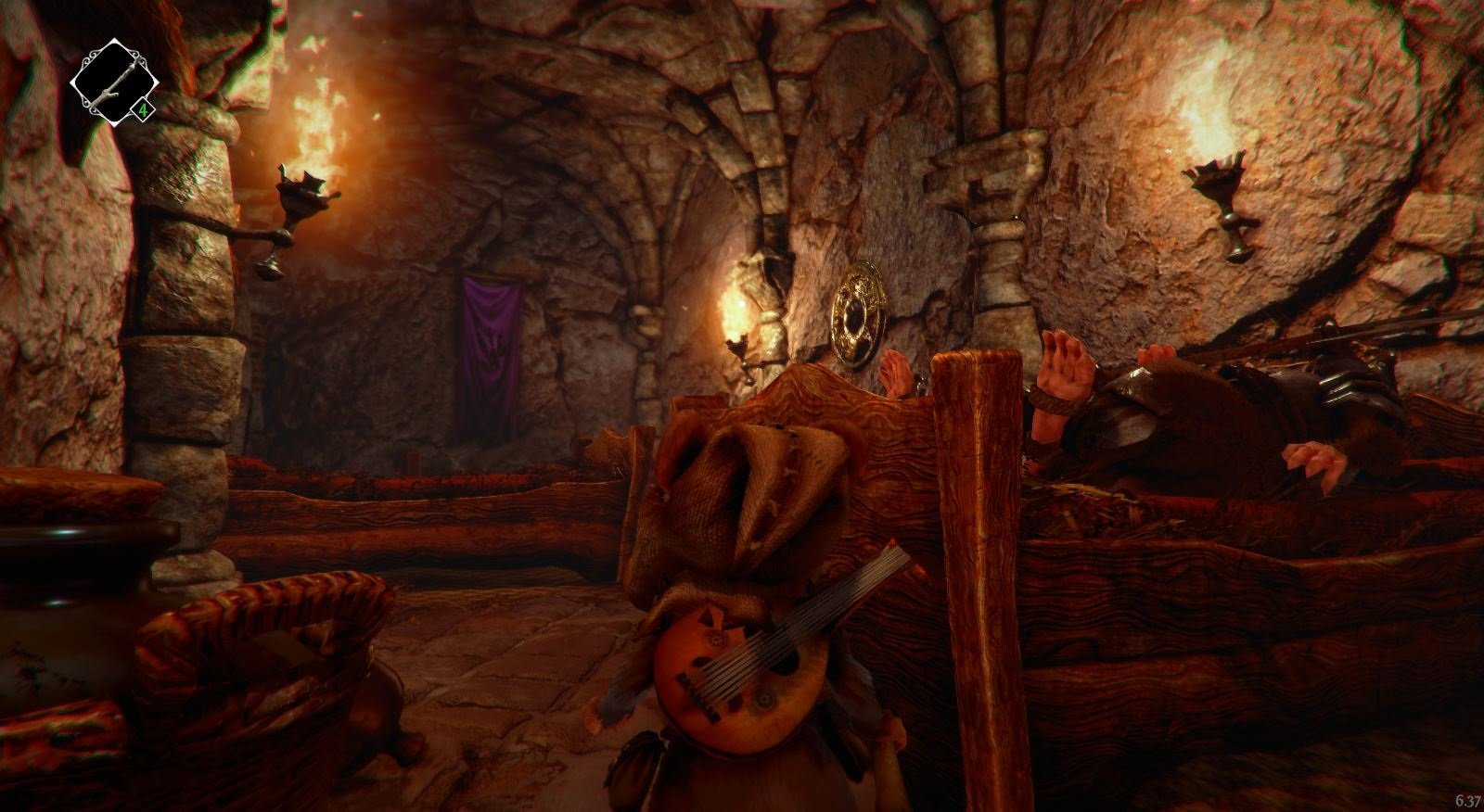 Ghost of a Tale has a fantastic aesthetic. It was the gothic imagery akin to games like Thief that first drew me in. The medieval adventure follows Tilo, a mousey minstrel on a quest to escape the clutches of a rat empire and rescue his wife Merra.

Tilo uses stealth and disguises to dodge the guards in this prison as he searches for clues as to Merra’s whereabouts. It’s all good fun, but some of the mechanics are poorly explained and honestly a bit frustrating. 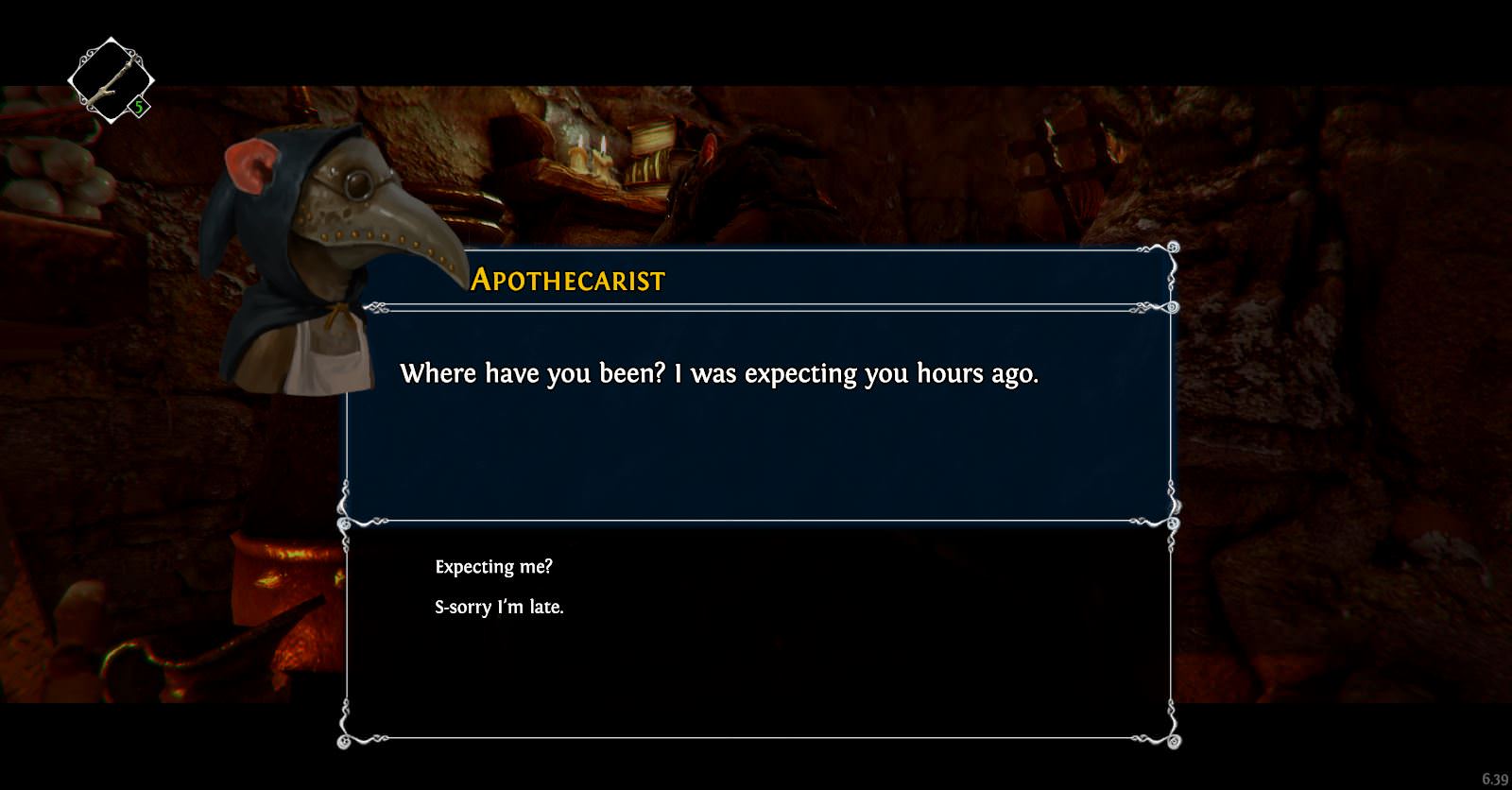 Ghost of a Tale is set in a medieval fantasy world inhabited by several different species of anthropomorphic animals. Mice, rats, frogs, badgers, and magpies among them. After being the heroes of an event known as The War of the Green Flame, the rats are the big cheese around here, and thus, mice like the player character, Tilo, are second-class citizens.

The game opens with Tilo awaking in a jail cell. He’s been mysteriously set free by someone called S and must find out where his wife has been taken and how he can escape this island outpost.

The halls of this Redpaw garrison are swarming with unfriendly rat guards and Tilo, while brave, is far from powerful, so you’ll have to rely on sneaking around. You can tiptoe past sleeping or non-observant enemies, but an awareness meter above their head will let you know when things are getting risky. 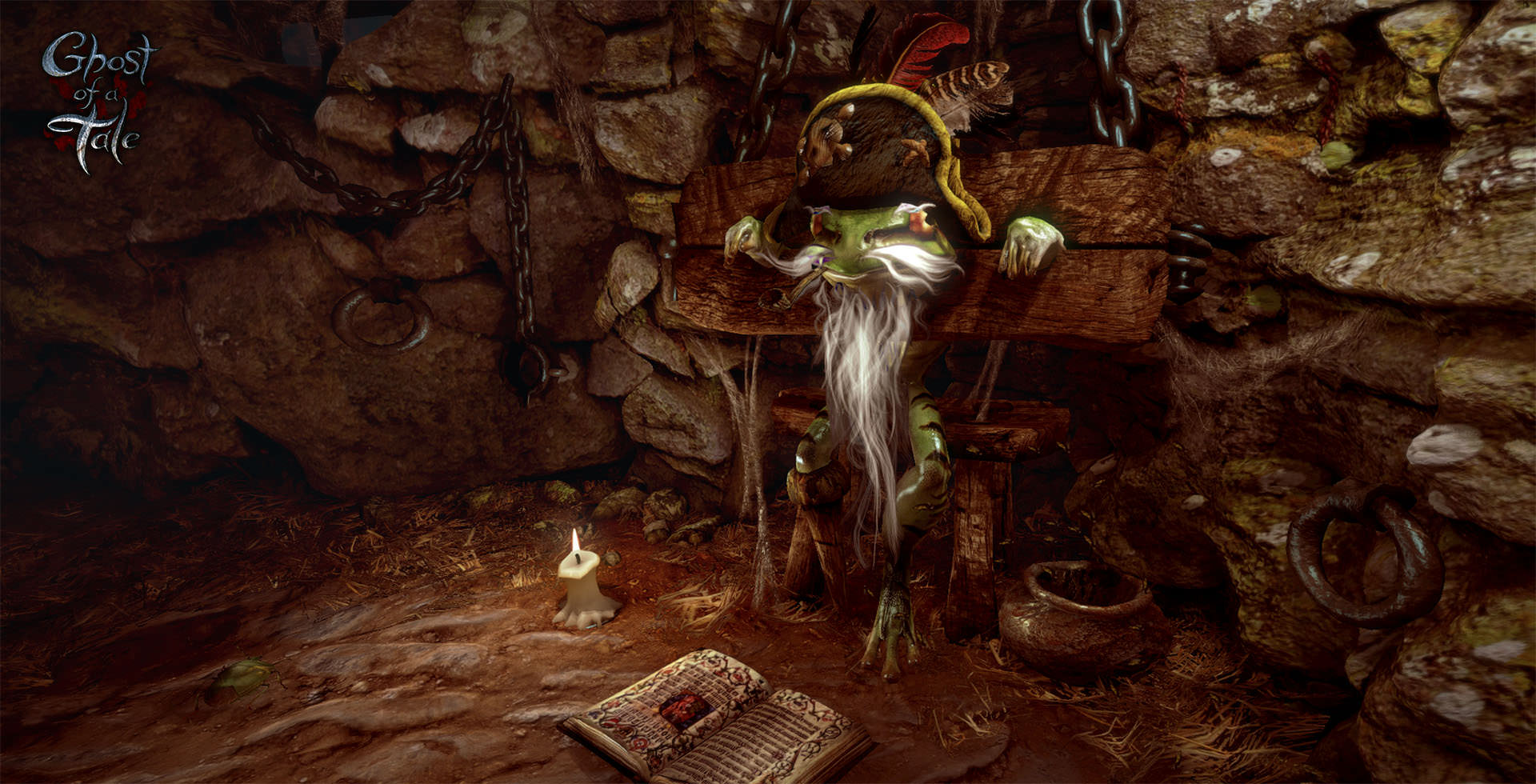 If spotted, you’ll have to make use of your limited sprint to scamper off and hide in a barrel or a cupboard; if the rats have line of sight on you, you’ll be unable to hide. Once you’ve hidden yourself the guards will give up shortly because as in most stealth games, searching a barrel is above their pay grade.

Most of the quests in Ghost of a Tale involve fetching items for NPCs at different points of the map, or putting together new costumes that will make these characters tell you what you need to know. For example, dressing like a rat guard will have the other guards simply letting you move about as you please. Some of them may be even willing to divulge information like the whereabouts of other items or prisoners.

The problem with these quests is the game doesn’t do a great job of setting a baseline for you. Early quests are about as simple as “get the footlocker key,” but telling me to grab a specific key that could be on the belt of any guard in any of the game’s areas doesn’t exactly give much to go off of. 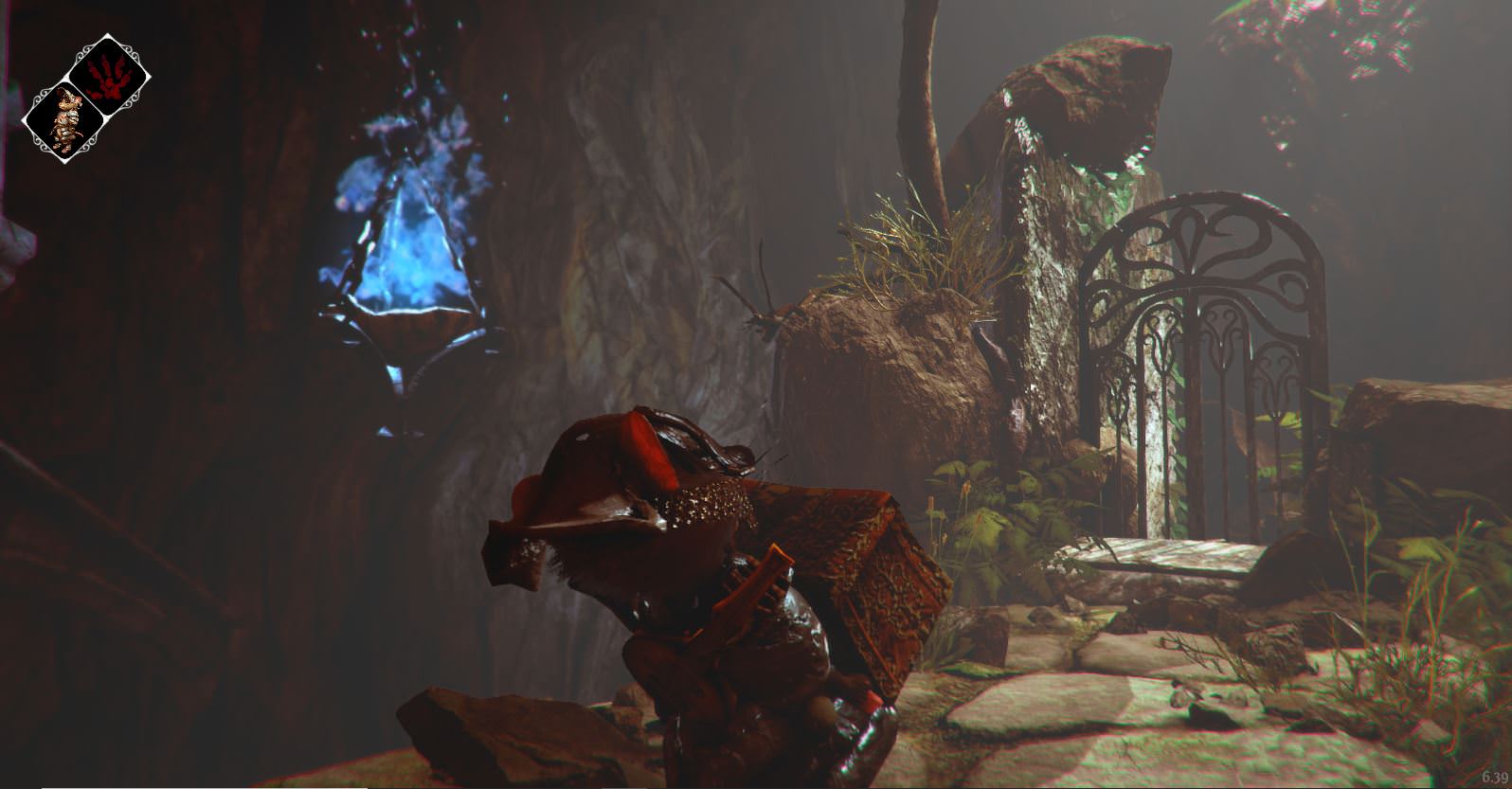 A lot of this leads to you just hoarding what you can and turning in quests as you happen to complete them. On more than one occasion I picked up a new quest only to find that I’d gathered all of the necessary items hours ago. Likewise, I found myself backtracking to far corners of the world to recover one specific item late in the game which, with Tilo’s limited sprint, can feel like a chore.

On a brighter note, the island setting of Ghost of a Tale is beautifully rendered. The day-night cycles allowed me to watch more than one beautiful sunset from the lake shore and tower keep, and when the sun goes down it gets damn hard to see your hand in front of your face.

Despite the flaws, I really did enjoy my time with Ghost of a Tale. Whenever the gameplay started to feel a bit too tedious the amazing writing would pull me back in. Every character you can interact with from the garrison commander to the pirate frog prisoner has something interesting to say and will react differently depending on your garb. 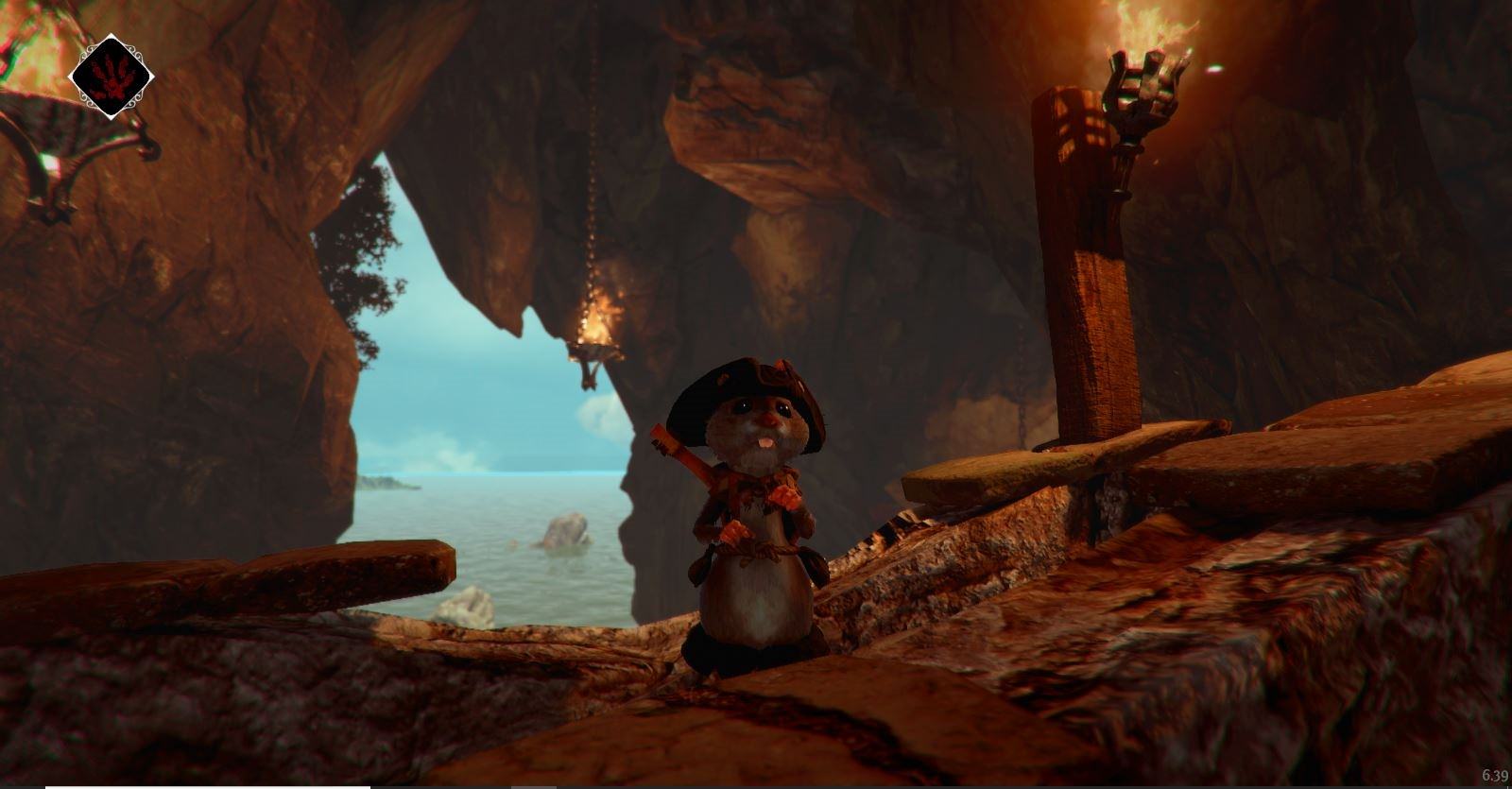 While the guards in the commissary will be alarmed when a pirate walks in, most of them will be happy to see a fellow guard. Hell, by the end of the game, they would all greet me by name when I wore my Redpaw armor.

Ghost of a Tale is a gorgeous, fun adventure that can occasionally be bogged down by frustrating and repetitive mechanics and it’s come a long way since entering Early Access in 2016. It doesn’t quite fill the stealth game hole that Thief left me with, but I hope we haven’t seen the last of Tilo.

Filed under... #Ghost of a Tale#Stealth