What’s going on, I can’t hold all these shmups!

With the rise of digital distribution, more and more developers are able to get their previously super niche bodies of work into the hands of more folks, which subsequently results in more shmups being developed — it’s lovely. Just take a look at Cave, who remained dormant for many years only to rise up and nearly put its entire catalog on mobile devices before moving to PC.

It’s a great time to be a shmup fan, sure, but not all of them are created equal. Ghost Blade HD has the makings of a classic shoot-’em-up, but ends up coming off like a half-measure. 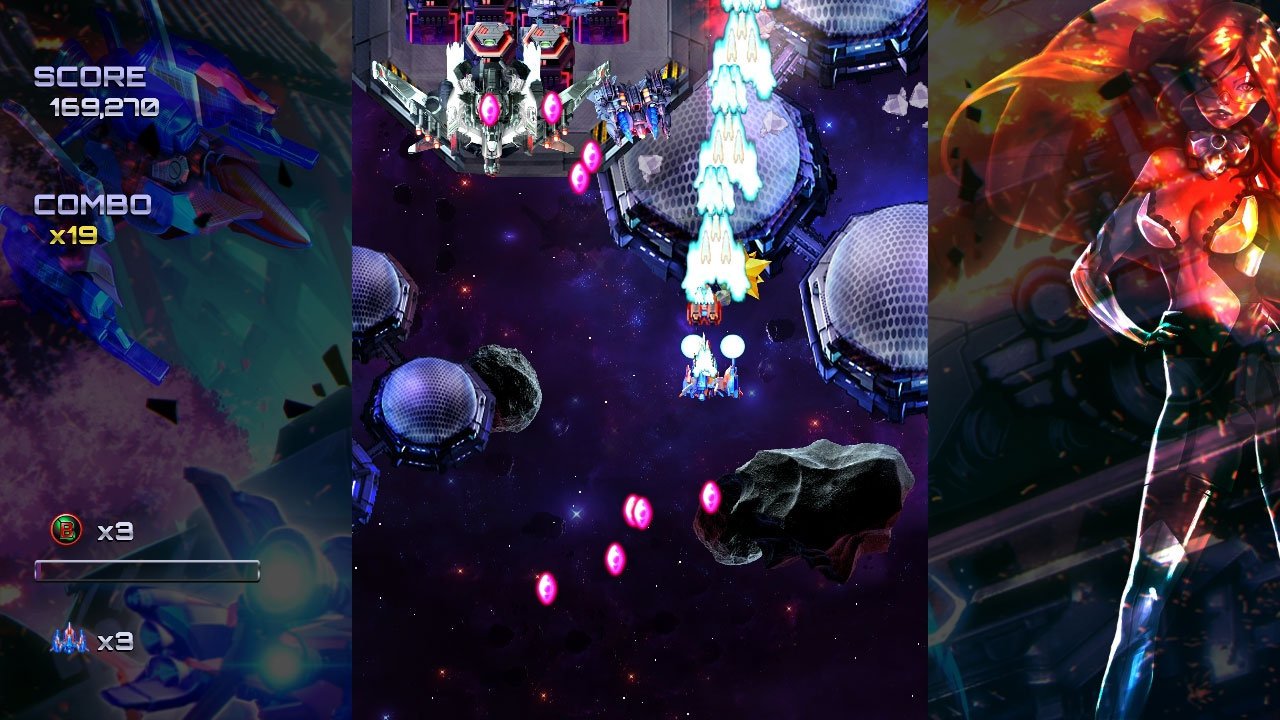 Shoot, focus, bomb. It’s a trifecta of buttons you’ve seen a million times before, but hell, it works. Ghost Blade HD takes the middle mechanic a step further by making it much more effective than other similar games, centering your spread shot into a literal beam of focused fire that’s best suited for big enemies and bosses. The bullet hell conceit never really goes overboard, and the maze patterns are well-crafted and aren’t haphazardly placed. It seems great on paper, there just isn’t a whole lot of material to work with.

Look, five levels that take around 20 minutes to complete isn’t a bad thing for shmups. As long as those stages all stand on their own and are worth playing hundreds of times over (whether alone or with a friend by way of Ghost Blade‘s co-op feature), I’m happy. But several of that small handful are way too similar in design, and the bosses leave a lot to be desired. There’s a lot of hope with the first big bad — a robot that has loose, shaky arms and exudes a lot of character. But then the team falls back into duller concepts like giant ships and the peak of a static spire.

There is a lot of potential there as you’re making your way through those truncated stages. I like how a lot of the enemies swoop effortlessly into the foreground — it’s done more gracefully and in a more telegraphed manner than a lot of other shmups. The option to customize your HUD position, wallpaper, and even swap the screen to a vertical position (for those fancy swing monitors), a choice that’s not typically present on western console shoot ’em ups, are all available in Ghost Blade. The sound design deserves a special mention too, as the electronic heavy soundtrack is one of the most standout things about it.

Training mode is also cut above, as it lets you tackle bosses directly rather than have to deal with going through the rigmarole of a stage every time. But while I typically go back through a shmup campaign for half a day straight until I start to reach some semblance of a good run, I didn’t have that same feeling with Ghost Blade. None of the nuts and bolts, including the three very similar ship types, feel that different within the confines of the game itself without taking the genre into perspective.

If the bosses were more interesting as a whole, there were sprinkles of lore in-between to dive into, and perhaps some alternate level tracks to explore, I’d be more inclined to play it again. That said, the three difficulty settings are well-tempered, with the lowest offering some reprieve without outright letting you win, and with the highest not being insurmountable while providing a challenge. Outside of trying a new setting, score attack and leaderboards aren’t enough.

With an easy mode, truncated (basically non-existent outside of “defeat the AI called Shira”) story, and a multiplayer option, Ghost Blade HD is a great gateway drug for anyone on the fence about getting back into shmups. It has all the mechanical makings of a great shooter, it just lacks that special spark in a few major areas.