There are few things in this world that allow people worldwide to connect at a human level, and learn from each other’s cultures, more than entertainment. Cinema can show us humanity wherever it is filmed, and games can teach us about the world’s many cultural myths and legends wherever they are created.

When a little Iranian game called Garshasp caught my eye, it showed much promise. Made by a small team of nine, this looked like the kind of game that has always been lacking on the PC in ages past. As a hack & slash game that draws from a different tapestry of Persian myths than many of us in the West are familiar with — Prince of Persia notwithstanding — Garshasp had the potential to unite players of any country or background in celebration of cultural learning and enjoyment.

What a missed opportunity it turned out to be. 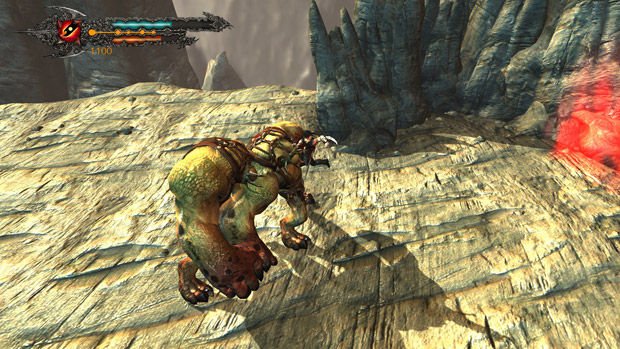 Garshasp is an all too familiar beast, being a legendary warrior who can kill a variety of monsters with combos of light and heavy attacks. Although this is a PC game, Garshasp is best played with a well-configured controller and you’re not likely to get very far using the default mouse & keyboard controls.

To compare it to God of War might be a bit lazy but when practically every part of the game mimics the classic hack & slasher, it’s hard not to do so. Many combos end in area-of-effect blasts, statues can be used for health and experience orbs, and there are even sliding segments in which Garshasp uses his blade to control his descent down a wall.

If you are expecting an intricate tale that delves into Persian mythology and shows you the wonders of this widely untapped cultural heritage of the bygone empire, you’ll be sorely disappointed. A narrator occasionally tells the story of Garshasp’s travels to recover a sacred mace of sorts that was stolen by the evil Hitasp, and that’s about it. The best you can hope for is some nice artwork featuring Persian statues. 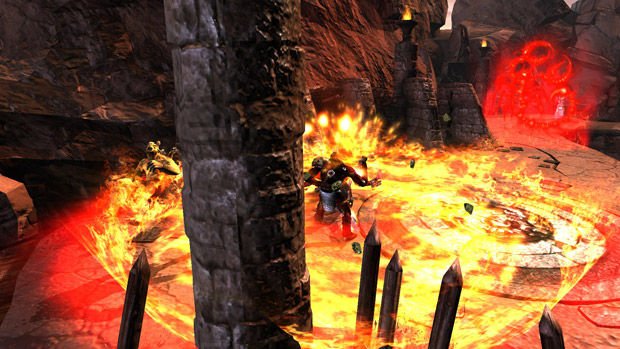 Disappointments with the lack of any fleshed out Persian mythological potential aside, the combat is mediocre at best. Incoming attacks can be interrupted with blocks and parries, and a rage meter can be filled for special attacks. Certain enemies can be finished with a Quick Time Event that always leads to an identical animation for the same types of enemies. If you’ve played any games of this type before, you know what to expect. Where it goes wrong is the collision detection and the camera.

Enemies have a pretty large hitbox around them that makes it easy to run or dodge into — even when they are spawning from the ground — meaning you’ll often get stuck in groups of enemies or bump into enemy space when you try to dodge away. Combine that with a camera that occasionally goes to ground level or decides it would be fun to get stuck behind a pillar in the foreground, and the core elements of frustrating combat are already leveled up to 99.

A lot of these problems are easy enough to overlook in the first two hours of the game when you already know you are playing a game that is not really good or polished, but when you’re still in that mode where you are willing to give it the benefit of the doubt. As you get further and further, however, a few frustrating combat sequences can kill you over and over again unless you run around in circles and spam the same area-of-effect attacks or get lucky with the camera and with dodging away. 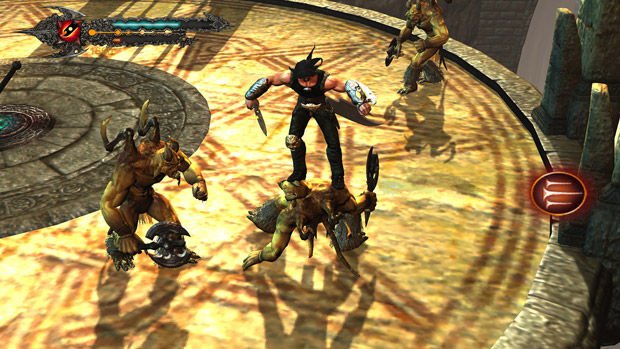 QTEs can be even more annoying as you’ll tend to run into an enemy to initiate one, and doing so with an analog stick can make it easy to accidentally press the wrong direction before you even see the prompt. You end up stopping in front of an enemy, initiating the QTE, and then using the d-pad to perform it. That is, if enemies don’t hit and kill you in the meantime. Grabbing one enemy in a group for a QTE finisher and succeeding in it is a matter of luck.

The usual trap-filled platforming sections pop up throughout the game, but other than a few swinging logs that push you down into oblivion, most of them don’t do enough damage to make you care about evading them too much. There’s always a health statue at the end of those segments to boost you back to full health, after all.

That is, unless you make the mistake of switching from your sword to the pretty awesome-looking dragon skull-and-spine mace at the wrong moment; this somehow makes all incoming health disappear. If you happen to do this and then run past a checkpoint with minimum health, you’re pretty much screwed.

Then there are the bugs. Garshasp can jump on top of an enemy and he’ll simply stand on top of them. You can still get hit, so it’s not really a gameplay mechanic you can exploit or anything like that. Occasionally some textures are simply missing or incomplete, showing you the blurry background skybox through the terrain. 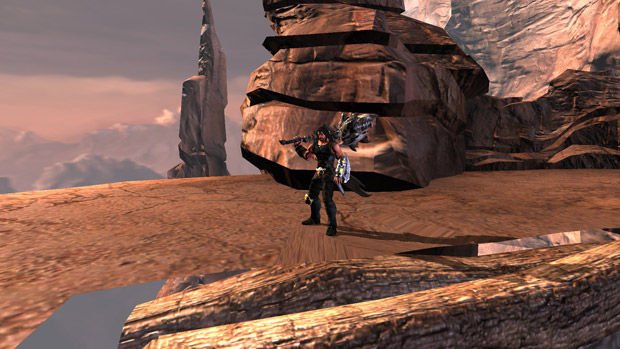 Enemies can glitch and fall off a cliff, and so can you if you happen to enter a QTE or a combo into an enemy that is standing near the edge of one. QTE-killing an enemy standing in thin air may look funny, but dropping down like Wile E. Coyote afterwards is slightly less fun. From time to time you’ll think you can walk off a ledge and drop onto the ledge below that is clearly the way forward, but then you’ll fall into a small gap obscured by the camera that someone decided would be fun to put there; the same thing happens with some bridges and corridors.

It’s likely to make you go: “I’ve played these games before, so I’ll just run forward to the next encounter and… what. Why is there a gap here!?” After the 20th death by cliff or surprise gap, you won’t even feel frustrated anymore. You just start to laugh at how dickish it is to make the player suffer like that — intentional or not.

Sometimes you are allowed a change of pace by doing something like riding a raft. That means you’ll have a raft with a gondola type of oar that you can push for 1.5 seconds to make the raft jerk forward, and then you need to push it again. And again. And again. It doesn’t even have momentum to glide through the water, but basically stops dead in its tracks until you jerk it forward again. Should you decide to dodge away from some of the goblin-esque enemies that drop onto the raft from time to time, you’ll dodge into the water and die; Persians warriors can’t swim after all. Luckily half of the enemies will just glitch and fall into the water. 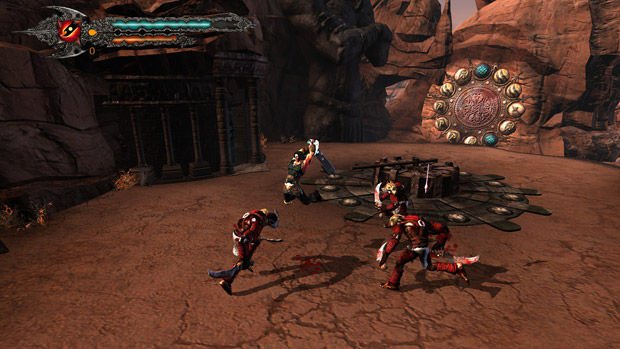 If you are willing to overlook the unfinished feel of the combat, the graphical and AI glitches, and the overall performance of the game — which can make decent PCs struggle at random intervals — there are a few highlights worth mentioning.

The animation for one is not bad at all, even if Garshasp’s hands almost always go through the ledges he’s supposed to shimmy on. Enemy animation and creature design is not bad either, and while there aren’t a ton of different types of enemies that require you to use wildly different approaches, there are enough of them for the four hours the game will last you.

Garshasp also doesn’t look too bad. It doesn’t look great, but on higher resolutions and texture settings parts of the game can look better than something like the HD remaster of God of War 2. Oddly enough, the prerendered cutscenes look a lot worse and more like the kind of cutscenes you’d expect from a PC port of a console game. And of course you can’t skip the majority of them, even if you happen to die straight after a cutscene ends because you got stuck inside a boss’s geometry. Or because you jumped on top of an enemy and then down to the ground, where you can’t run anywhere anymore because you are stuck inside the ground.

Despite the bugs and lack of polish though, some elements show that the small team at Dead Mage do have skills. It just feels like they should’ve spent some more time using their combined skills to fine-tune the game, or to tell an actual story for that matter. 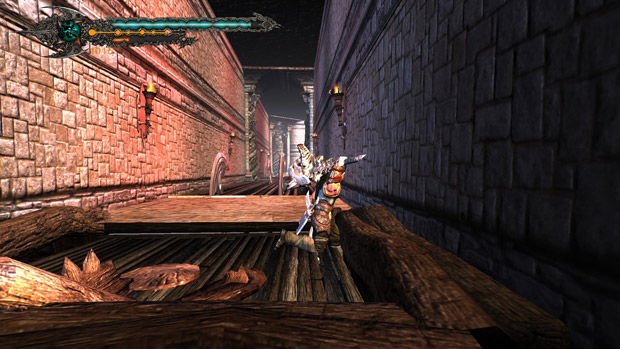 When it comes down to it, any of the positive things you can say about Garshasp simply do not counter all the negatives that are in the finished product — even after a couple of patches and pricedrops since its release. There are average hack & slash games that have their faults, like Conan or Viking: Battle for Asgard, but fans of the genre can usually overlook them in favor of having fun. Garshasp, however, sadly doesn’t come close to being one of those games.

It’s the kind of game that I would’ve eaten up in my teenage years when ’90s PC gaming didn’t have the type of games that were found on the consoles. We were happy as hell when we got an arcade racer like Screamer, or even a 3D platformer like Croc. If Garshasp had come out in that era it would’ve been an amazing game. But it didn’t. It came out in 2011.

Garshasp never fulfills its potential as either a standout Iranian game that introduces and immerses us in Persian myth, or as a niche PC-exclusive action title. Perhaps it was an overly ambitious project and it’s still a commendable first effort by Dead Mage on many levels if you are willing to look for what it does right. I really wanted to like this game for what it could have been, but when push comes to shove — off a ledge and into certain death in most cases — Garshasp is not even an average game by any measure.

Instead of unifying gamers of the world in cultural exploration while simultaneously enjoying themselves, all it manages to do is unite them in exclaiming the protagonist’s name as a sigh of frustration: Garshasp!

Score: 3.5 (3s went wrong somewhere along the line. The original idea might have promise, but in practice the game has failed. Threatens to be interesting sometimes, but rarely.)