Let’s get ready to stumble

After three long years, a fistful of patches, some redesigns, and viral videos up the wazoo, party-brawler Gang Beasts has finally left Early Access to officially unleash colourful mayhem on the world.

Created by Boneloaf, a UK outfit started by three brothers, and published by Tim Schafer’s Double Fine, the multiplayer fighter is now available on PS4, PC, and Mac. A madcap Battle Royale (in the traditional sense), Gang Beasts mixes simple-but-charismatic characters, ridiculous physics, and batshit chaos. Let’s find out if it deserves an invite to your next party. 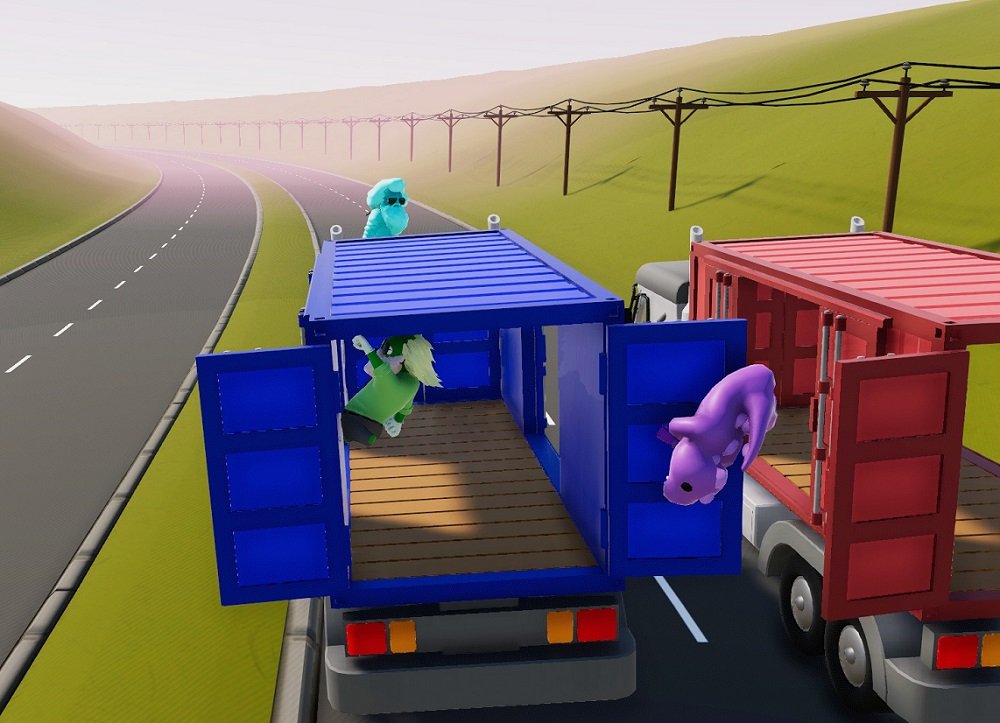 It has to be said that Gang Beasts is not the most technical fighter on the market. Its simple, no-nonsense premise sees a bunch of gelatinous, faceless characters — all of whom are fully customisable in wacky outfits — punching it out in a series of hazardous locations to be the last blob standing. This is achieved through ring-rocking brawls, as the fighters stumblefuck around the arena punching, headbutting, and slamming each other with the grace of a Saturday night 2am rumble between a pub bouncer and some guy named Terry.

Hardly Bushido Blade, the game can be considered part of the “crazy physics” genre, alongside titles like QWOP and Surgeon Simulator. The characters, practically boneless, gloop and slide around the arena with homicidal intent. Control is deliberately awkward, with shoulder buttons representing your arms, and the face buttons used for hugely inaccurate kicks and headbutts. It’s trickier than it sounds.

Gang Beasts‘ pugilists have the inertia of a fool on ice, and thus slip all over the shop, swinging wildly and careening off ledges on a whim. It’s not unlikely to see two players repeatedly punching a third in the head, whilst they themselves dangle another player off a speeding truck by the ankles.

In fact, the beauty in Gang Beasts‘ ugly punch-ups is in the bizarre way they evolve. A fight on a truck might see two players roll under the wheels together, locked in a simultaneous choke-hold. A scramble between three dudes in an elevator might end when a fourth simply yanks off the cabling, sending them all crashing to Earth. Everything in the arena can be clumsily manipulated. Walls can be climbed, railings broken, windows shattered. It’s all part of the game’s base theory of “Entertainment first, strategy last.” 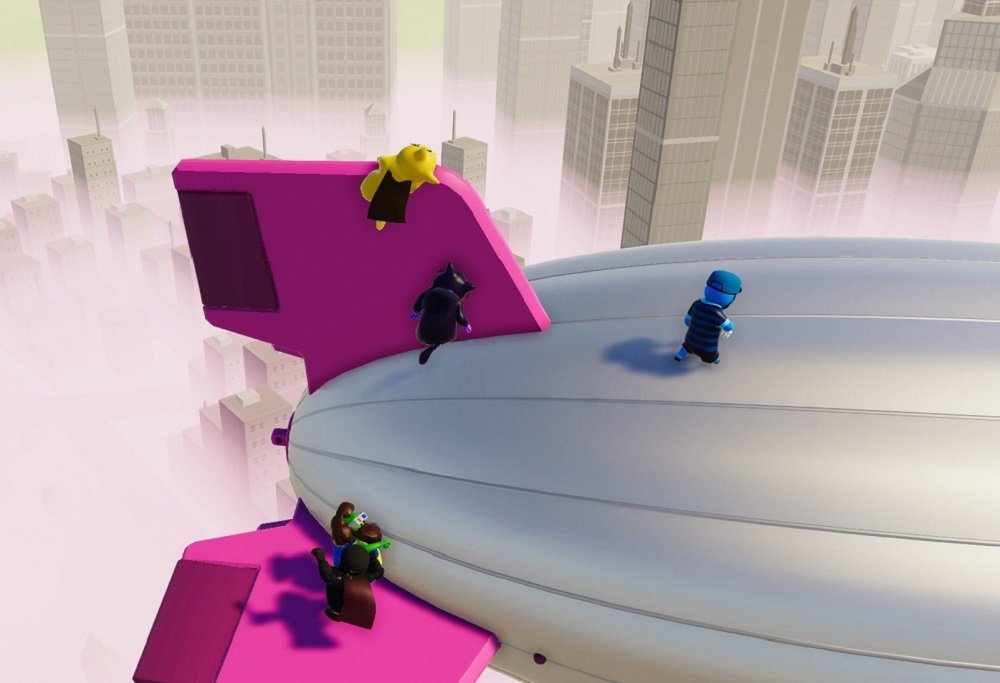 Although it has been in Early Access for years, the game still looks like something you’d have found on Greenlight. It has very bare presentation, with a UI, options screen, and lobby system akin to that of an in-production Alpha. The game itself is also pretty busted. Numerous times hapless players would get trapped out-of-sight, leaving us all waiting out the clock, which seriously hurts the comedic flow. On an aesthetic level, there remains plenty of glitches, flickering textures, and some post-load pop-in.

Though the emphasis is, quite rightly, on fun, with technical shoddiness being part of Gang Beasts‘ quirky appeal, the problem comes when you’re asking $20 for what amounts to a low-budget, kinda-broken, party title. Destined to be played every now and then, before being put “back into the cupboard,” so to speak. There are other modes to explore, such as a soccer mode and a battle against waves of CPU characters. Online fights are an option, but without friends some of the appeal is definitely lost. Ultimately this is a game you play for an hour at a time, at best, before the novelty starts to wear thin. 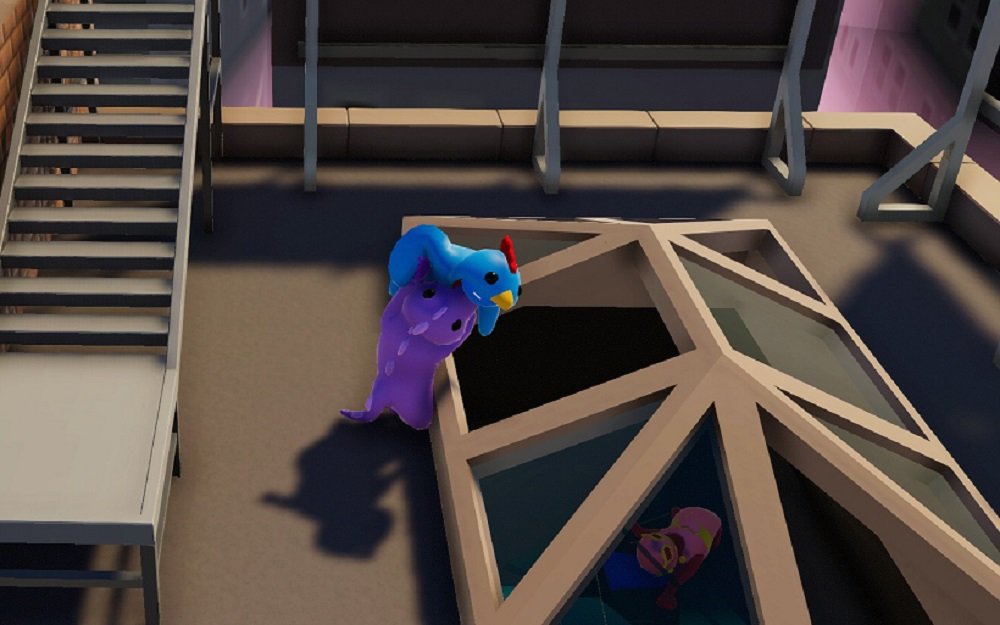 Gang Beasts succeeds in entertaining its audience. For something so difficult to control, it is amazing what brilliant, Hollywood-style events can occur, such as a death-defying leap to safety from a collapsing platform. Those laughs and moments are very entertaining. But buyers should remember that the game is essentially a novelty, multiplayer-only title. As such, its longevity may be in doubt.

It’s tough to be down on Gang Beasts. At heart, it’s just very silly entertainment for you and your pals, like the multiplayer games of yesteryear. It’s kind of bad, broken even, and it’s certainly not going to become a mainstay of anyone’s regular gaming catalogue. But it does guarantee some laughs with your buddies. Isn’t that what gaming was designed to do?