The War of the Five Kings might be one of the bleakest collections of events in A Song of Ice and Fire, the series on which HBO’s and Telltale’s Game of Thrones is based. The entire continent of Westeros is at war, heroes are slain, villains rise to power, and it is around this point that many readers and viewers finally accept that everything will probably not be okay (to put it lightly).

Game of Thrones: A Telltale Game Series takes place toward the end of the conflict, but that does not mean everyone is safe. The kingdom is undergoing a restructuring of sorts, and those who were allied with the losing factions walk a thin line between loyalty and destruction. House Forrester of Ironrath in the North is one such clan, caught up in a conflict much greater than itself, struggling just to survive.

[Note: spoilers for the source material and events during the prologue of this episode are present in this review. Proceed with caution if you have not yet finished A Storm of Swords (Book Three) or Season Three of the HBO series.] 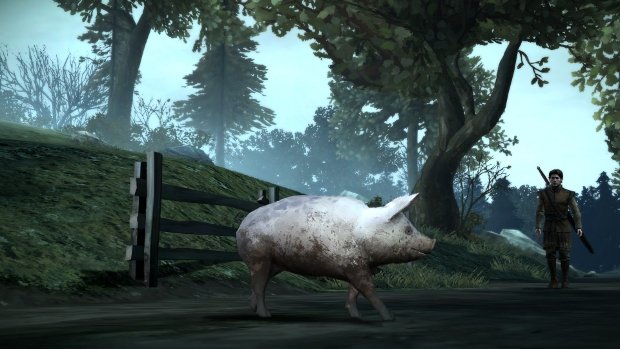 Over the six planned episodes, Game of Thrones is set to be experienced from the point of view of various members of House Forrester, both noble and lowborn. Most fans of the series would not know the Forresters yet, as the family has only seen a brief mention in the novels and has not appeared in the television series. Still, the family feels familiar, as it closely mirrors the better-known Stark clan.

Lord Gregor is the battle-hardened head of the house whose life is taken through treachery. Lady Elissa is his wife, a calculating matriarch from the South. Ethan is their teenage son, thrust into power before he is prepared. Mira is the firstborn daughter, discovering guile within herself while living the life of a proper lady in King’s Landing. Ryon is the youngest son, too fearful and naive for the harsh time he was born into. Asher is a short-fused warrior who was exiled to Essos. Only Ethan’s twin sister Talia does not have a close parallel in the Stark family.

In this episode, players control Ethan, Mira, and a lowborn squire to Gregor named Gared Tuttle. Asher is hinted as the fourth playable character for future episodes, but the final member of House Forrester to be controlled is still unknown. True to the source material, there are many characters to keep track of, but there is an in-game codex to aid in that endeavor (and the notification for its existence pops up exactly when it is needed).

Any who have played the most recent Telltale series know what to expect in the gameplay department. Players divide time between exploration, dialogue, and action. Exploration sections involve walking around, inspecting the environment, and initiating conversation. Dialogue sections present a series of choices for the player to steer the story, in both major and minor ways. Action sections involve quick-time events and serve to inject some excitement into what is otherwise a largely passive experience.

All of that is present in Iron From Ice, but Telltale’s trend toward a greater focus on writing and a lesser focus on classic adventure gameplay is apparent. After the opening at Edmure Tully’s wedding at the Twins and the subsequent chapter following Gared, there are no more action sequences. As quick-time events are never particularly great in Telltale’s games, this is not a huge loss, though it does set the slower, more somber tone for the episode.

Less easily excusable in the shift away from classic adventure gaming is the total lack of puzzles or other logic exercises. The characters do keep inventories, but none of the items gained in this episode are put to use in any inventive ways. Most are not used at all, but instead saved for later. The only thing remotely resembling a puzzle is having to remember a dying man’s words to act upon later, and to liken that to a puzzle is a stretch. 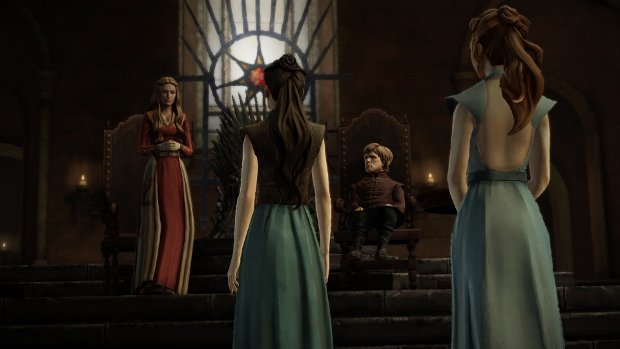 The emphasis on story largely pays off, as it captures the essence of A Song of Ice and Fire. Diplomacy is paramount in Westeros at this time, and certain sections like the audience with Queen Regent Cersei or the encounter with Ramsay Snow are particularly nervewracking as a result. Attempting to balance honor, fealty, nobility, and justice is an impossible task, and no matter which dialogue option is chosen, it rarely feels like the right one.

By the end, I was filled with a sense of dread for what is to come. The Forresters are good people, but it definitely seems like their situation will get worse before it has any chance of getting better. To exacerbate the feeling, having (perceived) agency in the story elevates it from “bad things are happening to good people” to “bad things are happening to good people and it’s all my fault.” To the effect of creating a foreboding narrative, Telltale emulates the source material well. Still, it takes a particular mood to enjoy such a dire tale.

One of the failings of the story is common for Telltale: it turns out that the choices the player makes are not as far-reaching as they initially appear to be. Driven by guilt over some wretched outcomes from my decisions and curiosity over whether they could have turned out better, I played through Iron From Ice twice, each run taking about two hours. Despite the claims that the actions of each playable character would ripple out and affect others in House Forrester, the main plot events are largely predetermined. If the choices made here have important effects, those effects will not be clear until a future episode.

Overall, the writing is on par with what we expect from Telltale. It is smart and it captures the feel of A Song of Ice and Fire well. Dialogue for existing characters Cersei Lannister and Ramsay Snow is spot on. Tyrion lacks any standout lines that will be classic quotes, which is disappointing. 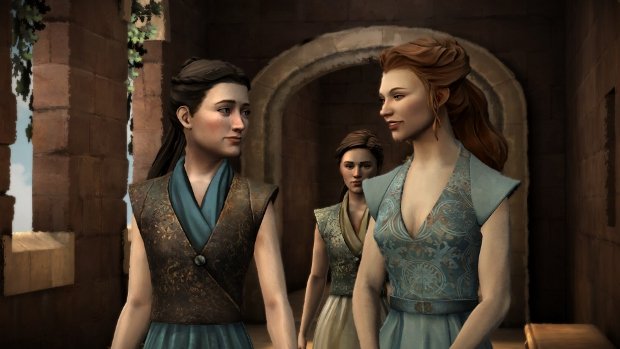 Graphically, Game of Thrones is kind of a mess. Though it was not apparent from the quick cuts in the teaser trailer, the art is done in the style of an oil painting. The two-dimensional landscape backgrounds can be beautiful, but up close the textures are muddled. Usually, the edges of character and environment models are sharp, but at times they take on a strange blur. It is distracting at worst, but it highlights the age of Telltale’s engine.

Another side effect of the inclusion of less cartoony character models is the step toward the uncanny valley. Most of the previously unseen characters look stylized enough to fly under the radar, but some of the known characters are unsettling. Specifically, Margaery Tyrell resembles a strange alien porcelain doll hybrid. Again, it distracts from the serious drama of the narrative.

Still, that narrative is the focus, and it is strong. If Zer0 Sum left me looking forward to future episodes of Tales from the Borderlands because things are going to get awesome, Iron From Ice does the polar opposite for Game of Thrones. The bad situation that House Forrester is in is only going to get worse. It feels like a punch to the gut, and it sets the stage for an intensely emotionally draining experience. In spite of its blemishes, so far it looks like Game of Thrones: A Telltale Game Series deserves its place in the A Song of Ice and Fire lore.