Ladies, ladies… one at a time

I didn’t think anyone else at Destructoid would be interested in reviewing Gal*Gun: Double Peace. I’ve become the defacto niche Japanese game reviewer somehow and this title, with its scantily clad teenage girls you pleasure with your shots of love, is obviously right in my wheelhouse.

Thankfully, I’m not the only weirdo here. When we received our review codes, Chris suggested we tag-team it to see if we could double penetrate Double Peace‘s cartoonish exterior to find what fun there was to be had behind those throngs of turned-on teenagers. 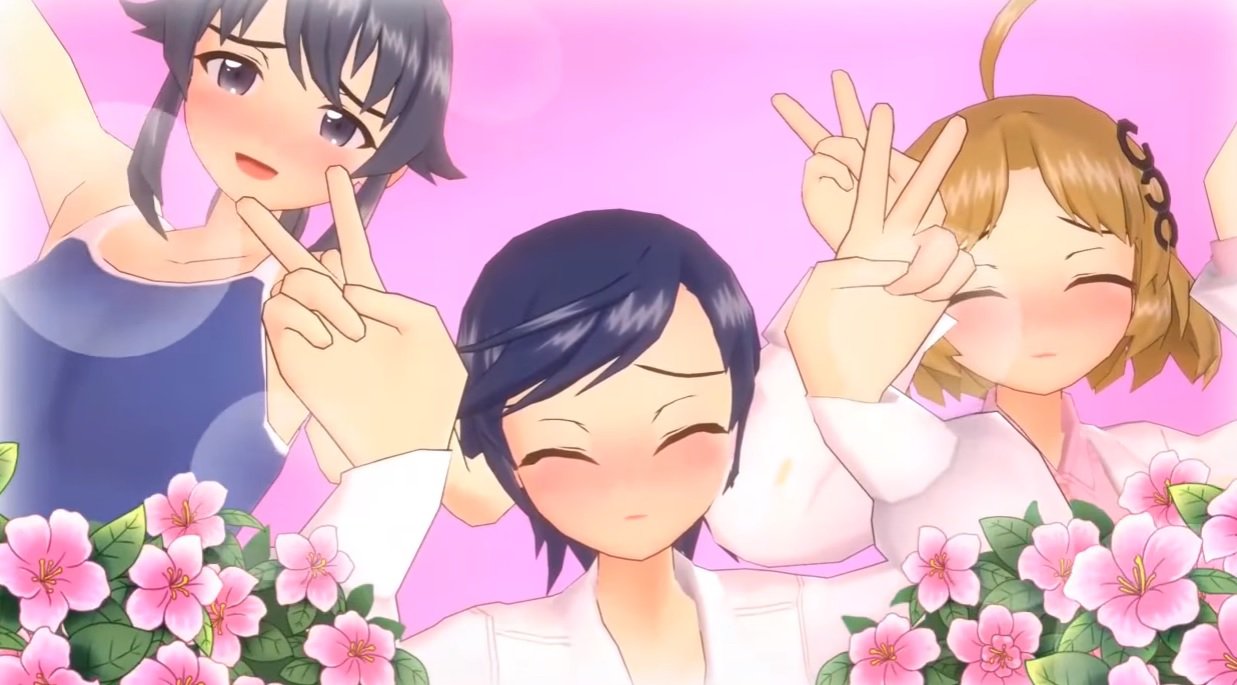 CJ: Hey Chris, I can’t wait to talk to you about Double Peace, but I just have to wait for it to load first.

You know what, I’m going to go make a bag of popcorn and see what finishes first.

The popcorn finished first. Three minutes for the game to load?! Something tells me it’s not optimized for the Vita.

Chris: Everyone else may as well grab popcorn too for these reviews across the web!

As a little bit of Destructoid meta, I’m glad you’ve been covering so many of these obscure releases. I actually got my start years ago reviewing a niche game from Japan (the original release of Disgaea 3), and although I often don’t have time to cover everything, I love it when I have the chance to focus on them as often as possible. And like Tokyo Mirage Sessions, Gal*Gun is unapologetically anime, so much so that it expects you to already know what senpai means. It’s amazing.

So for people who haven’t been following along, Gal*Gun is a rail shooter where players fire pheromones at girls to subdue them after a Cupid (Ekoro) makes everyone fall in love with you. In a way, it’s like that Aerosmith game Revolution X with its secret zones and wild premise, which I really dig. Speaking of digging in, before we do so, can I just say I love the soundtrack? It’s so upbeat it reminds me of Lunar (the school setting also brings back memories of Vane). It’s so hopelessly upbeat, and it knows what it is. Oh, and the PS4 version has been pretty smooth so far.

How are you finding it?

CJ: It’s easy to see Gal*Gun isn’t ashamed of what it is. When one of the personality options for protagonist Houdai is “pervert,” it’s obvious this game is quite comfortable in its skin. And it’s so nice to hear the PS4 version has been a smooth experience because “smooth” is not a word I’d use to describe my time on the Vita. That boot-up time I mentioned above is not a joke, and while it only took that long the first time I started the game, subsequent restarts have taken upwards of two minutes. Then there are the loading screens, which appear frequently and are so long I found myself using the stopwatch feature on my iPhone to time them.

If people watch that trailer above, they’ll notice an obvious slowdown in frame rate. It’s present in nearly every level of the Vita version. There doesn’t even have to be a lot happening on-screen for it to occur because it’s as if the shooting segments have a framerate cap of around 25 fps. Depending on what I was doing (like zooming while moving), that framerate would drop down even further. I’ve seen old Rankin/Bass television specials with smoother animation than some sections of the game.

Of course, the question I always ask myself in these situations is “does the framerate/bug/glitch take away from my enjoyment of the game?” As I progressed further and further, I found it wasn’t the annoyance I was worried it would be. Once I accepted the fact Inti Creates clearly went with “good enough” for the Vita version, I was able to focus on the entertaining parts of the game, and by that, I mean satisfying these teenage girls with my love gun.

Chris: It is fun, isn’t it? I mean, it’s not the most amazing shooter in that it only really offers the basics, nor does it do anything really new outside of its wacky (in the west, at least) presentation, but at no point did it feel like a chore.

After hearing all of the hubbub about it I expected something really strange but instead got a rail shooter that’s just silly. I also love the attention to detail, like Maya and her recognizable tilting Oni mask, and Ekoro’s memorable getup. All of the characters are recognizable in their own way even with all of the costumes — more-so than a lot of western games I’ve played recently.

Also, to your “pervert” point, I went with “jock” and decided to try something different! None of the personalities seem to really make a huge impact, but if it’s basically just stat alterations by way of classes, I’m on board. 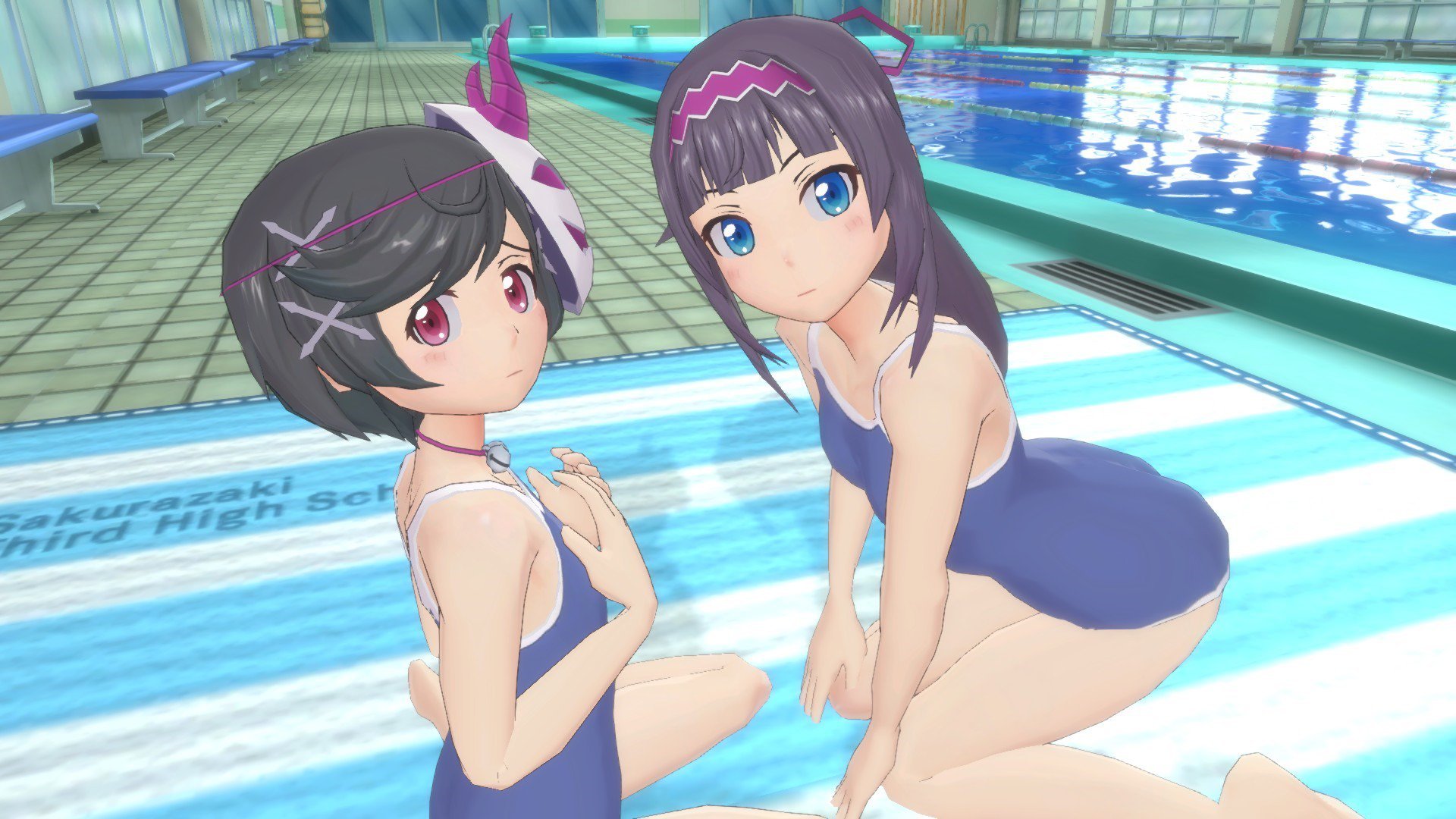 CJ: The school may be kind of basic in design and decor, but you’re right about the girls. They feature way more detail than I would have expected. Their eyes are really expressive. I also love the little details like the cellphone chatter between chapters or when you zoom in on a girl and her clothes turn lightly translucent giving you a glimpse of her underwear. It all adds to what is a charming, breezy, and silly rail shooter that honestly wasn’t a whole lot of fun. At least, it wasn’t on beginner.

After I finished my first playthrough with two of the available endings, I restarted the campaign on expert and found myself enjoying it a hell of a lot more. Girls take more shots to satisfy, so you really have to give it to them. With multiple waves of teenagers pursuing me, expert mode actually provided a challenge, testing my ability to make all these girls experience euphoria as quickly as possible. There were so many girls, in many instances the only way I was able to make it through without being overwhelmed like a guy in an Axe ad was to jump into Doki-Doki mode as soon as possible.

To our unaware readers, Doki-Doki mode is a way to clear out most of the girls on screen with a little hands-on action. You can rub up to three girls at once, targeting their pleasure areas with enough finger action to trigger simultaneous euphoria. The camera is always moving, so you may have to wait for it to circle around if you’ve found the perfect spot to rub on her body. Purchasing additional cameras gives you multiple moving angles that make this easier, but finding the right spot on each girl can be difficult. I had one third-year student whose only pleasure area was her taint and, due to the way she was sitting, the cameras barely gave me a glimpse of that.

The touchscreen on the Vita makes this mode quite immersive (and also incompatible with the PlayStation TV). It does the same for the mini games, which had me rubbing and swiping the screen to help heal a girl who fell or get the same girl out of a sticky situation. The touch controls for segments like these is why I choose the Vita version.

How do these portions play on the PS4? 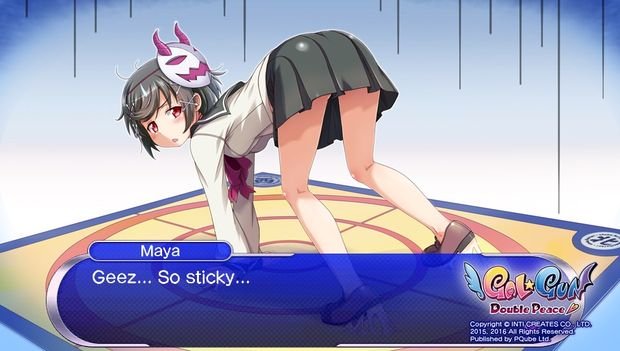 Chris: They sound, uh…a lot less interactive! It’s tougher to have to move the cursor quickly to compensate for the moving camera, even if it’s pretty responsive. But at no point did I feel like the game was too cheap or insurmountable.

As we talked about previously, the smoothness of the console edition makes up for some of the Vita’s control enhancements. It plays just like a lot of other shooters for previous consoles did sans NES Zapper, sans Super Scope — missing that little extra something, but fun so long as the gameplay and interesting world is there. I also jumped in right away on expert mode so that may have helped.

To sort of tie in to what you’ve been saying this whole time about the absurdity of it all, I’m surprised that from start to finish, it’s basically the same version that launched in Japan. While I can generally tolerate small alterations for the west, seeing something that’s essentially untouched is refreshing.

CJ: It is absurd and refreshing, and the game is all the better for it. The strange scenarios found within kept me coming back for three playthroughs, whether I was protecting a girl from a tentacle monster or stealing panties from the girls locker room like a character from an ’80s teen sex comedy. There is a lot of replay value in unlocking the different endings, finding all the costumes, and traversing the different parts of the school. Hell, I still haven’t found those squid girls pictured at the top of the review. I have, however, given euphoria to more than 1,200 girls, which basically puts me in Leon Phelps territory.

I didn’t think I would have this much fun with a casual rail shooter that uses touch controls, but Gal*Gun: Double Peace kept me engaged and entertained with its uncompromisingly Japanese high school antics.