No, it’s not furries

After an amazing debut with Rogue Legacy, I couldn’t wait to get my hands on Cellar Door Games’ attempt at a side-scrolling beat-’em-up. I grew up, as many did, loving every opportunity to play the classics like Turtles in Time or The Simpsons arcade game, especially with friends. Since then, even more games have come out to rekindle that love, the poster child being Castle Crashers.

Full Metal Furies is the newest game to cement itself as a modern classic, and with Cellar Door Games behind it, it’s got a good shot. 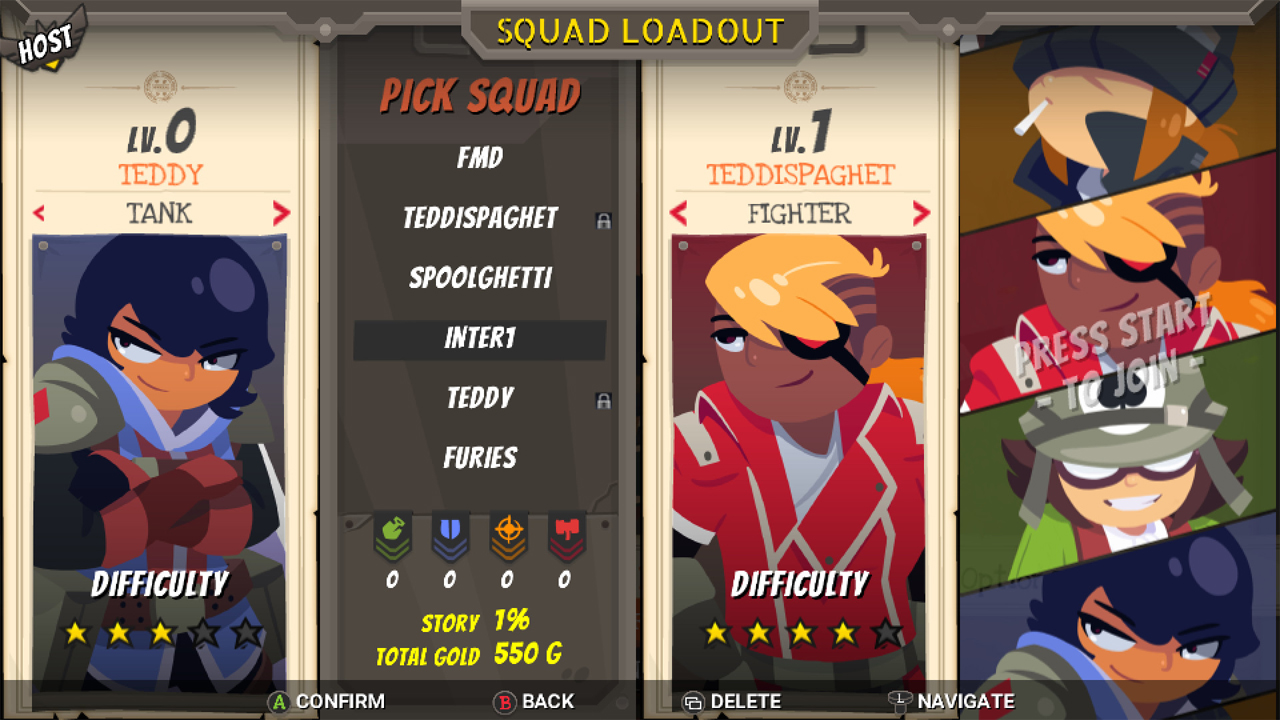 Full Metal Furies puts players in the shoes of Triss, Meg, Erin, and Alex, four women who have set out to take down the four Titans of their world. Each character acts as a unique class with their own set of abilities and upgrades. Triss is the tank, Meg is the sniper, Erin is the engineer, and Alex is the fighter. Chances are that each player will quickly be drawn to one character or another based on how they play, their visual design, or their personality.

Personalities are quickly established through cutscenes at the beginning of or between levels. There isn’t an incredible amount of dialogue at any given moment, but it is well written and often genuinely funny. The game doesn’t take itself too seriously, yet at the same time starts raising philosophical questions of ambiguous motivations and alignment of moralities. The writing is certainly not the main draw (cutscenes can even be completely turned off), but it tonally fits the overall theme of the game.

The gameplay is what is going to bring all the proverbial boys to the proverbial yards. Full Metal Furies plays similar to a beat-’em-up like Castle Crashers, though with a larger emphasis on ranged attacks. Two of the four characters use ranged attacks, which at first I was worried about. In general, a big knock against classic beat-’em-ups is how hard it can be to “align” your character with an enemy. Luckily, the ranged weapons have no issue here. The sniper’s default gun has a laser sight that will be blocked once it comes in contact with an enemy, and the engineer’s pistol hits anything within a huge conical range. There is also a ton of content. It will take around ten hours to get “through the story,” only to realize your story progression is hovering around 50%. Please, have no qualms about value or anything of the sort here.

Each character plays ridiculously different from one another, though there are plenty of similarities. Everyone has a basic attack, an escape maneuver, a “Tec” attack, and a unique move. Tec moves vary per character but generally do damage in some way shape or form. It’s hard to make a general statement about almost any of these since blueprints are collected and bought to change how many of the move properties work.

Seriously, “baseline” characters often play completely differently than their geared-out versions. Best of all, every blueprint I have come across has felt like a true “sidegrade” instead of complete upgrades. Often I’ll find myself reading the description and thinking “wow that sounds amazing!” and then using it and having my expectations put in check. My final thought is generally “I understand this weapon’s uses” and then ultimately decide whether or not it fits my playstyle. Since all four moves have four blueprints, mixing and matching the different alternatives is incredibly exciting at times, and is what truly sets Full Metal Furies apart from other games in the genre.

Of course, this whole thing is built with cooperative play in mind, but there’s plenty of fun to be had solo. When playing alone, players choose two Furies to swap between at any moment with the press of a button. This allows for some really neat combination of powers that would be much harder to set up in cooperative play due to specific positioning. It’s exciting to discover that two characters’ moves sync up really well and execute them in a stage. For anyone worried that this is only fun with friends, fear not (though it is amazing with friends). Plus, you can always jump online and team up as well. 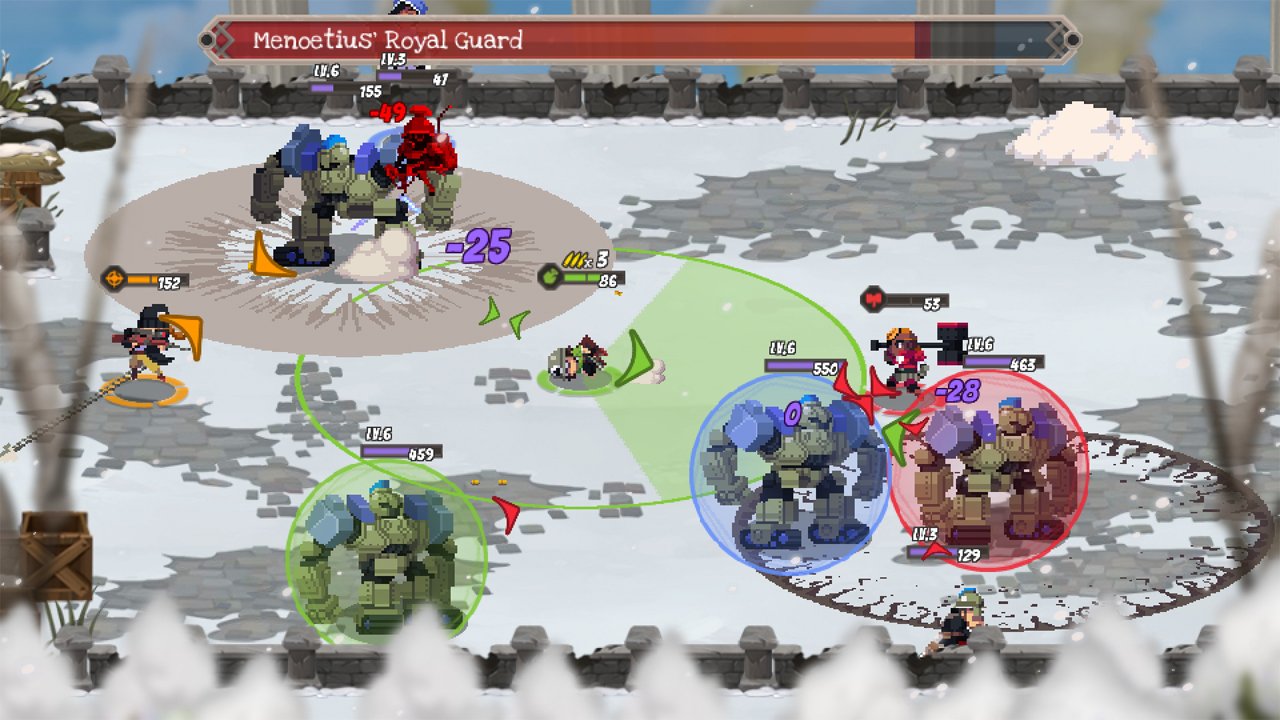 There’s a great variety of enemies and they are introduced at a manageable rate. Not all enemies are created equal, and there are some that I shudder to see mixed in with a big group (I’m looking at you, airstrike-guys). I wouldn’t say that any one enemy has a “tricky” behavior pattern; the combination of enemies on any given screen is what provides the difficulty. Well, that and the colored shields.

Colored shields are my least favorite thing about the combat system. Often, enemies will have a colored sphere around them that links up with a specific character (one that is already in the game). To do any damage, that specific character must attack that specific enemy until the shield goes away, at which point any character can damage it. I understand why it was implemented, but feel as if it is an artificial and lame increase in difficulty. Sometimes that character will be downed and must be revived before any damage can be done, which results in circling around and wasting time until you can safely revive them (especially solo). It also essentially forces each character to put a decent amount of points into damage, since otherwise, it will take forever to take down the shield, especially later on in the story. There is at least a colorblind mode that draws lines between the enemy (even if they’re invisible) and the character that can hit them.

There is a lot in place to make sure players “switch it up.” Profile-level masteries increase things like damage, health, and gold, and can be leveled up by using different blueprints often. Stick with the same four attacks forever? You’ll level up much slower. Cellar Door Games really doesn’t want you to dump all of your money into one character, and so they’ve added all these extra mechanics. In reality, the characters and blueprints are inherently interesting enough to get players to swap out often enough, and most of this feels extraneous and, in the case of the colored shields, uninteresting. 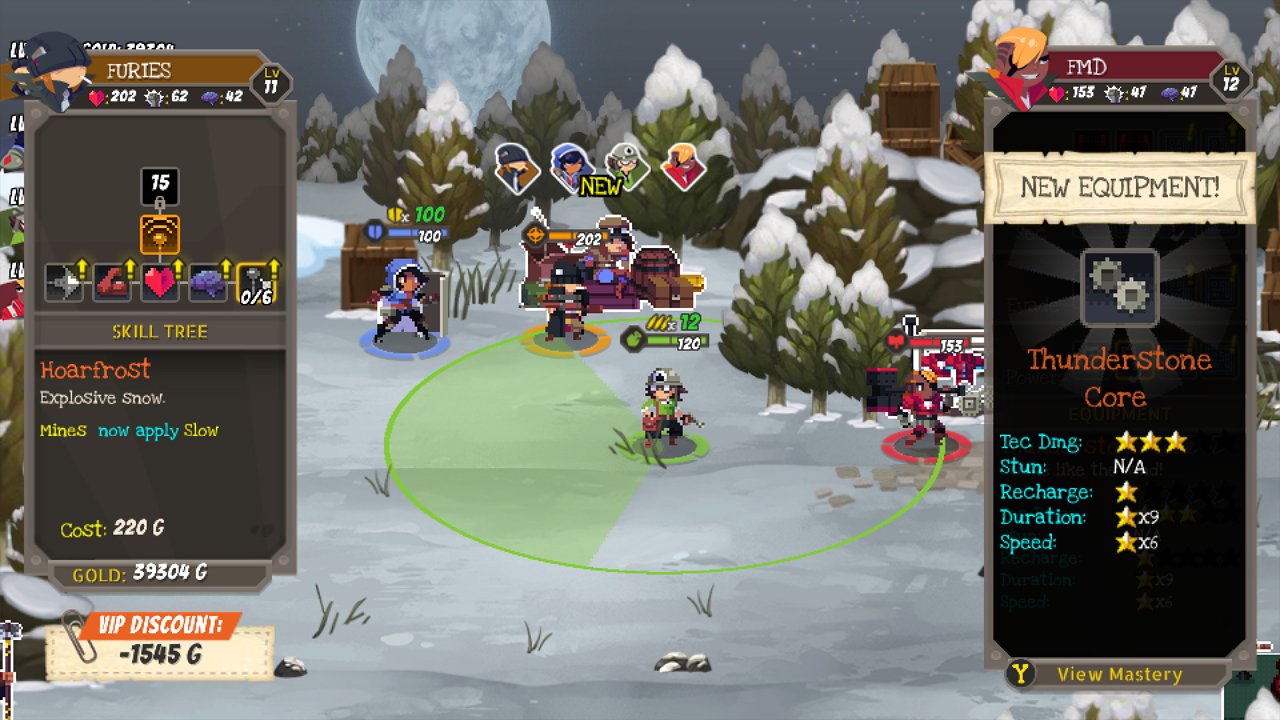 The gameplay loop here is strong. Players will head out on a mission, collect some gold, and then spend it back at base camp on either the aforementioned blueprints or the skill tree. The skill tree is the game’s way of providing tangible progress by allowing for the increase in stats and the purchase of unique passive abilities. For example, players will eventually unlock the area in the tank’s tree that allows her to dash longer. There is always something to look forward to as more pieces of the tree are unlocked and your favorite characters get better and better. Similar to Rogue Legacy, this is such a great way to ensure that the player is always working towards something, even if they fail a mission.

The beauty of the structure is that there’s rarely a point where the player feels dejected. Without spoiling anything, the later fights feel as if they just pumped HP into the big baddies and put colored shield on them in order to make them “hard,” but even then, there’s always the possibility of replaying other levels, getting more gold, then coming back with some new talents or blueprints. That may not jive with a lot of players who just want to progress, but considering how many secrets there are to discover, chances are many players will find themselves replaying old levels anyway.

There is a lot to love here in what ends up being a fantastic beat-’em-up that deserves to stand alongside modern classics like Castle Crashers, Scott Pilgrim Versus the World, and Double Dragon Neon. It’s far from perfect but hits so many of the right notes that it’s easy to ignore those faults in the midst of gameplay. Plus, with so much interesting things to do, it’s guaranteed to hold your interest for a long time to come.