One of the most appealing facets of Apple Arcade is the idea that I can try before I buy. I know a lot of games these days come with demos, but usually those are extremely limited in how much you’ll be able to see of the final product. With an Apple Arcade subscription, there are no such limitations. So if a game initially launches here but is ported to one of my preferred platforms, I can get all the facts I need on my iPad before showing my support to the developers and buying it on my Switch or PS4.

That’s why a game like Frogger in Toy Town is the perfect Apple Arcade title. It’s something I’d be hesitant to actually spend money on if it were coming to Switch instead of iOS. But with the new subscription service, I no longer have to hesitate because I can test it out from beginning to end. And because of that, I now know this game is something I should never buy if it comes to another platform. 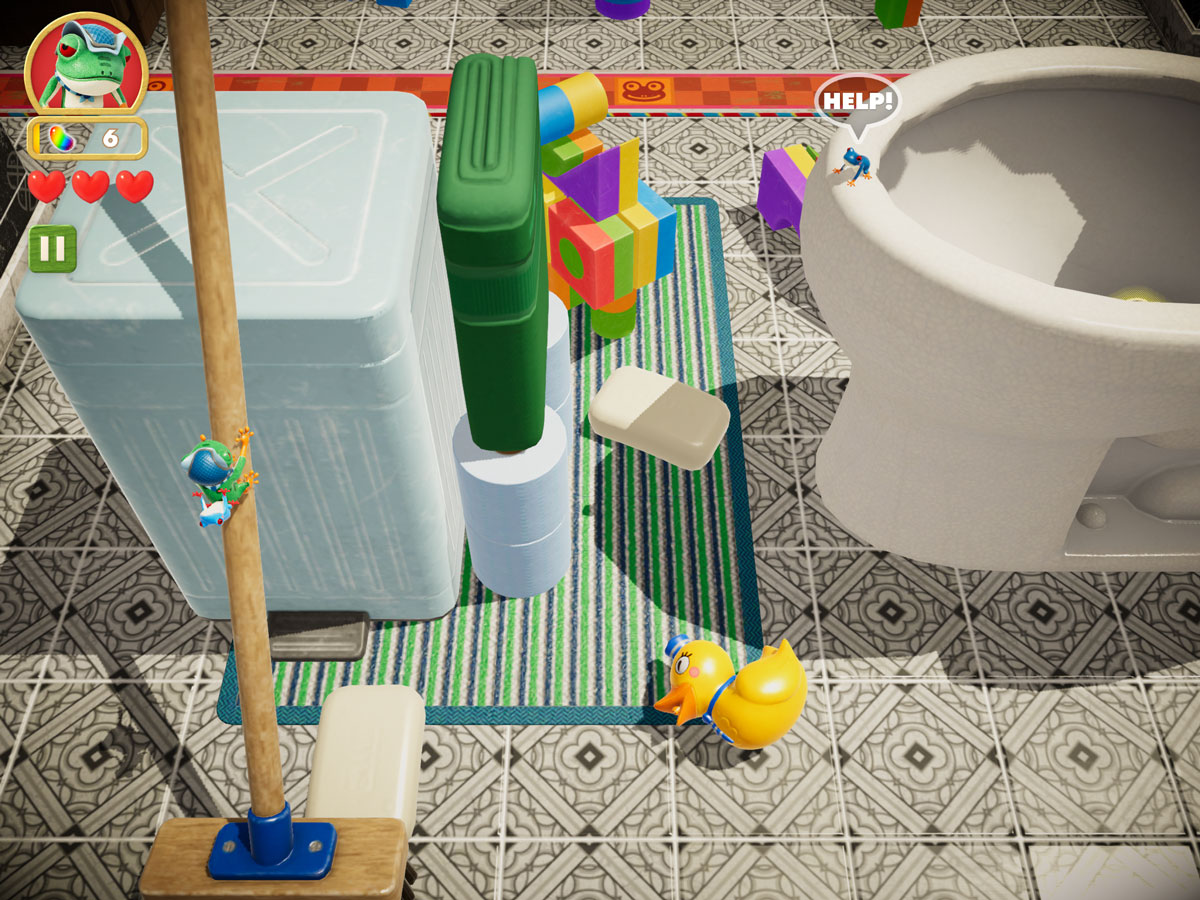 Frogger in Toy Town is a game about chaos. You play as the legendary Frogger as he traverses various, beautiful stages attempting to rescue all the froglets that scattered during a recent storm. As a frog who appreciates the human world, Frogger is chosen to infiltrate the many rooms of the human houses where these froglets are waiting to be rescued.

You progress through most stages as you do the classic Frogger. Traveling from the bottom of the screen towards the top, you’ll have to avoid a wide variety of hazards looking to drain you of all your hit points. There are toy cannonballs, helicopters, spring-toys, rings, babies, vacuums, and more, in addition to the classic cars and trains that move in alternating patterns.

The toy theme fits the game wonderfully and developer Q-Games did an admirable job of finding ways to incorporate all the different objects into this gorgeous game. Some objects are simple barriers, some are used in small puzzles found throughout each level, and others can be used to attack the hazards that stand in your way. Not only are you able to attack with certain objects scattered across each stage, but Toy Town also has a few unique single-use weapons that can aid you in your rescue mission. These include bombs, jump pads, decoy frogs, and more.

Progression through Frogger in Toy Town is similar to most other mobile puzzle games, though without the typical free-to-play bullshit. Each stage has three tasks you need to complete to collect coins. Two of the tasks almost always revolve around saving a certain number of froglets while the third is usually level specific. Sometimes you have to avoid taking damage, other times you have to avoid being hit by a certain hazard. It can be troublesome when hazards start to stack up because if you do take a hit, any froglets you’ve rescued will scatter to the wind. The levels are short, so it’s not the biggest of deals to just start over once you take your first bit of damage.

Save up enough coins from completing the tasks and you’ll unlock new costumes, challenge levels, and houses filled with more stages to conquer. Later levels have a smooth and gradual difficulty curve to them, though occasionally, the difficulty will spike if you have to restart a level. Any time you retry a stage, the layout will change. Usually, it’s manageable, but sometimes the game will drop an armful of objects into a small space, severely cutting down the ways in which you can proceed. It can be frustrating, but not nearly as frustrating as Frogger in Toy Town‘s physics engine.

Rather than opt for something along the lines of the arcade original, Toy Town utilizes real-world physics for Frogger and all of the objects in the game. Like I said at the top of this review, Frogger in Toy Town is about chaos. For instance, you can use objects and other weapons to attack hazards in the game. So if I have a ball, I can throw it at whatever is standing in my way. But just because I hit it doesn’t mean that ball or that hazard will disappear. In fact, both will bounce off one another, usually sending them flying into other objects in the area. Often times, that ball will keep going until it hits one of the many car/train portions and proceeds to back everything up. This presents a problem: just because a hazard has stopped moving doesn’t mean it won’t hurt me.

Or maybe it does. The hit detection is so unpredictable here that a rolling paint can that has come to a complete stop might still damage me, but I can run head-first into a baby and it won’t do a damn thing. Considering all froglets will hightail it out of there if I lose even a single heart, these cheap and unpredictable hits are irritating. Unfortunately, Frogger himself is behind many of the cheap hits I had to deal with throughout my experience because he is one unreliable frog.

If you have played it, you’ll know in the original Frogger when you jump onto a log and then onto a lily pad, so long as you don’t completely miss it, it’ll only take you two jumps to make that move. Not here. Frogger in this game likes to stick to the sides of an object and there is no telling whether the jump he’s about to make will result in you landing on the side or on the top of whatever it is you’re trying to crest. So that move to the log to the lily pad might take three or four jumps depending on how he lands. 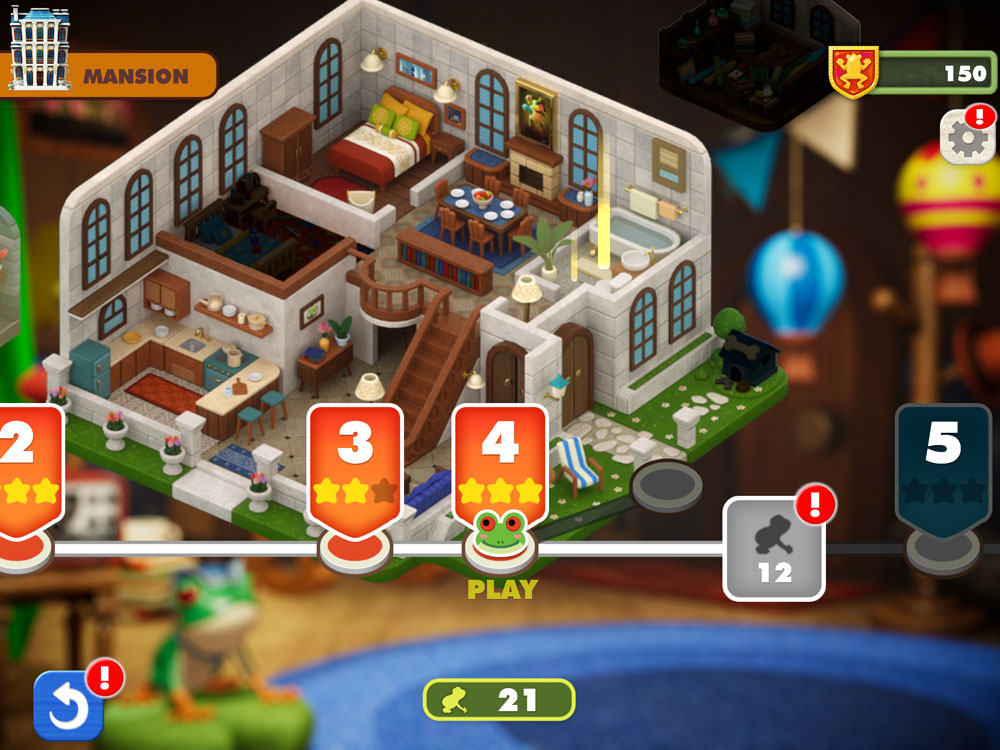 It’s absolutely aggravating to watch all the froglets I’ve rescued scamper away after taking damage because Frogger and I had a difference of opinion on where he should be jumping. This lack of consistency is inexcusable and led to countless restarts of several levels because Frogger decided he couldn’t make the jump to the top of the short stack of books on his first or second try. No, first I would have to be hit by the toy duck chasing me — driving my froglets away — before he’d consider, maybe, making that jump.

I can handle a world full of chaos, where my actions create ripple effects and I have to figure out ways to get around the messes I cause. I can even handle inconsistent hazard movements and the not-quite-frequent-but-certainly-not-occasional feeble hit detection. But what I can’t handle is character movement that feels as though the game is flipping a coin to see whether or not Frogger will end up where I want him to. And while that may not have stopped me from seeing Frogger in Toy Town through to the end, it certainly kept me from enjoying it.