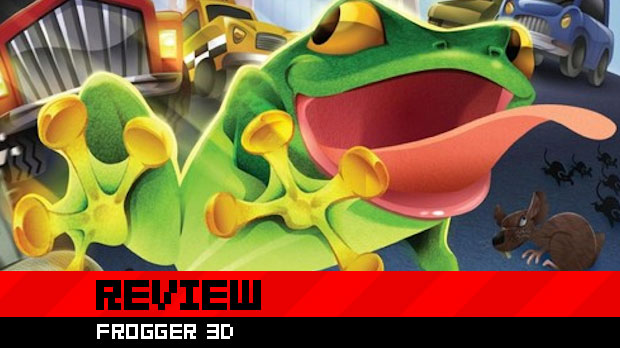 Frogger is one of the most recognizable games on the planet. While not quite as famous as Pac-Man or Donkey Kong, it nevertheless has made a lasting enough impression in its arcade heyday to be “up there” with the VIPs of the gaming world.

Despite this, however, the series hasn’t been quite as exploited as its peers, and certainly hasn’t had a high profile outing in quite some time. Unlike Pac-Man or Donkey Kong, Frogger is a name that has never been mentally associated with anything other than the original arcade title, due to his subsequent games’ failing to make any impression whatsoever.

So, if we can say one good thing for Frogger 3D, it’s that it keeps up tradition.

Frogger 3D faithfully builds itself on the core of its famous ancestor, putting players in control of a frog that hops along an invisible grid and charging them with the task of avoiding cars, snakes, pits, and other deadly forces in order to reach a goal. It’s a simple and timeless formula, but naturally Konami has plenty more to add.

Each stage must be played three times, with the goal moved to a more difficult location each time. Starting on the second turn, coins also appear dotted around the level, providing an optional challenge. Each goal must be reached within a time limit, and some stages have regular appearances by huge trucks or car chases to keep things extra dangerous. If the frog is squashed three times, the stage is lost and needs to be started again from scratch.

In several stages, our heroic frog has access to “friend” frogs, which grant temporary bonuses if he hops on their back. The “Vore” frog will eat tomatoes, opening up new paths, while the “Big” frog can leap across obstacles otherwise inaccessible to smaller amphibians.

Frogger 3D‘s biggest problem is that its stages generally come in two varieties — boring and annoying. The boring levels are simply retreads of the classic “hop from A to B while avoiding cars” dynamic, which is about as compelling as the original arcade game — inoffensive, but hardly amusing. The annoying levels try to be more gimmicky but invariably fail due to these gimmicks’ adding nothing but frustration.

Such contrivances include a slot machine that spits out coins — coins that are indistinguishable from the pile of gold you’re hopping across, so you can’t see what’s coming — and trucks that randomly speed across roads, crushing any player who wasn’t clairvoyant enough to get off the road in time. Many of these gimmicky traps come without any warning whatsoever and are fully intended to kill the player the first time around. In games specifically built around death as a mechanic — platformers like Heart of Darkness or Limbo — this can be an endearing trait. In fact, the varied and brutal deaths are often amusing in themselves. In Frogger, where you’re plodding a small frog along a map, only to be boringly squished, it feels like a massive waste of time.

Some of the ideas truly are clever, but it takes only a few seconds to realize that clever ideas don’t always make fun games. For example, there are “boss” stages that make innovative use of the core Frogger gameplay, but they rely on repetition and take far too long to deal with. Yes, it’s “smart” to have the frog push a trolley of spikes along a street to puncture a truck’s tires before it speeds in from the background. However, it’s a chore to do that four times in a row. It feels like work, not a game.

Not all the ideas are dreadful, and a few cool enhancements do pop up. This mostly concerns the aforementioned ally frogs, who can be rather fun to use. There’s even a “Metal” frog that can smash cars out of the way — although staying near them too long will kill your frog in a resulting explosion. Walls that can be climbed and can allow the player to jump greater distances provide some deeper puzzling elements as well.

The graphics also actively contribute to the challenge, and only in negative ways. The skewed perspective of Frogger 3D often makes it hard to accurately judge where danger is coming from or where it’s going to land. Sometimes, the game actively exploits this, changing to an even more skewed, almost isometric angle just to confuse and annoy. Levels that would be too easy rely on bad graphical design to artificially keep things tougher. But again, the alternative is to present a level normally, which would make it simple and weary. There’s never any middle ground between insultingly easy and insultingly annoying.

There’s a multiplayer mode, but it’s not online because this is the year 1992. There’s also Endless Frogger, which is the classic arcade title stretched across an infinite map. Unsurprisingly, this is the best part of the game, since old Frogger is better than any of the new stuff.

I tossed the game aside when I hit the aforementioned coins stage, because Frogger 3D is a fool’s errand of a game that often relies on cheap ambushes to be challenging but remains utterly tedious when it tries something less surreptitious. It has a handful of interesting ideas, but none of them work well enough to create an engaging videogame, and everything else is just old school Frogger with graphics and perspective changes that nobody asked for.

It’s a shame because the first few stages are relatively cool and present a lot of promise. It’s also not badly made, just designed poorly, with a lack of charm and character to make up for it. Perhaps the frustrating stages could be more easily forgiven, or the tedious stages more easily slogged through, if there was any humor or character in there, but this is not the case. It’s just a very drab, mediocre game, spiked with moments where one wants to throw the 3DS on the floor.

Perhaps the worst thing about Frogger 3D, however, is that it could have been on a cellphone rather than sold as a $30 game. Given that its longevity is mostly made up of stages that repeat themselves, that the gameplay input is simplistic, and that the core mechanics are considerably shallow, there’s really nothing that should have stopped it from being released on iOS or Android platforms. The only thing that justifies its place on the 3DS is the fact that it has “3D” graphics, but I turned those off because they make the game’s traps even harder to gauge. When your big selling point detracts from the enjoyment of your product, you’re in trouble.

Developers need to be more careful when creating handheld titles, because the market has changed so much. A game like Frogger 3D would have been acceptable five years ago, but with mobile games easily able to offer their own arcade experiences, it’s not good enough to throw up something like this and expect to be taken seriously. Hell, this game doesn’t even look very good, with boxy graphics and zero visual effects. To say it could be on a mobile phone isn’t rhetoric — it’s a straight fact.

Ultimately, Frogger 3D is a game with nothing to offer the world but boredom and irritation in equal measure, and isn’t worth playing even for those who are desperate to flesh out their 3DS library.