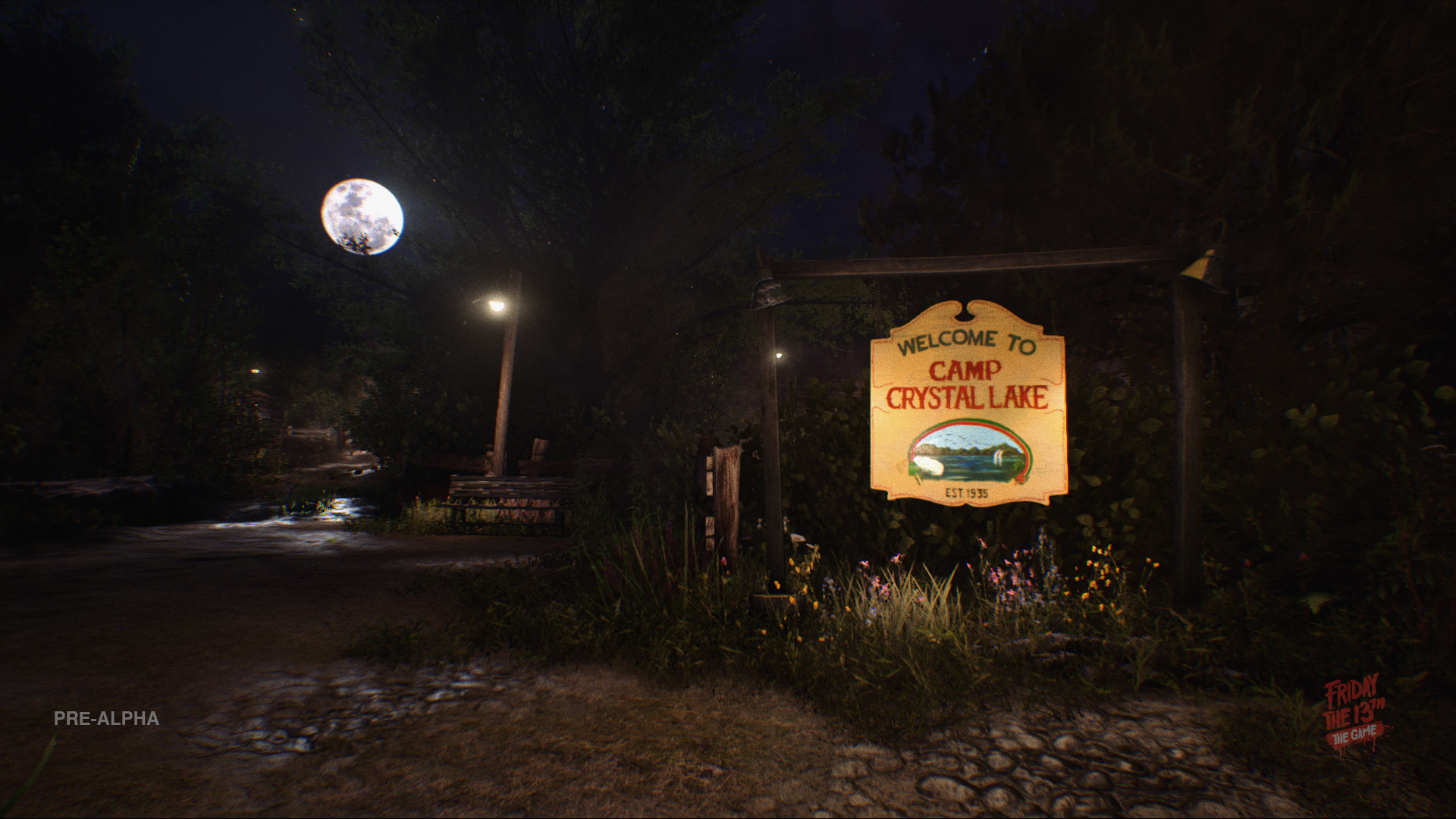 Somehow I’ve made it through life without viewing a single Friday the 13th movie, yet after playing this game I feel it’s probably unnecessary (see what I did there above??).

Kickstarted back in October 2015 and initially planned to be released last fall, Friday the 13th is now here for folks like me to revel in ’80s teen slasher glory. And boy, did I get slashed. A. Lot. 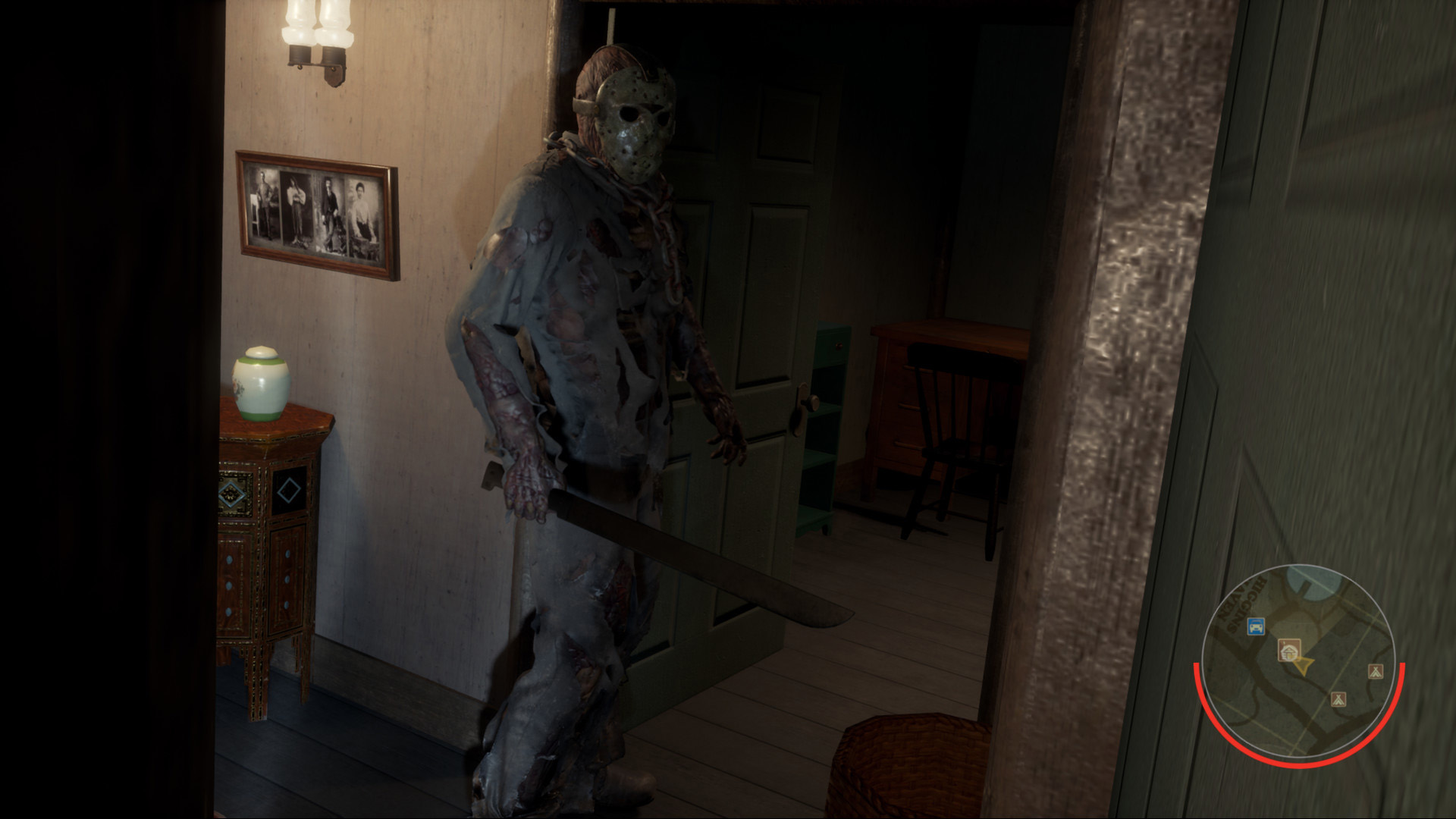 Friday the 13th has a fairly straightforward premise: you and eight other online players are thrust into a campground from the ’80s as camp counselors, with the exception of one player who has the good fortune of being selected as Jason. His job is to, you guessed it, horrifically kill every counselor. This is done through many means including but not limited to: axes to the crotch region, throwing fools through windows, bear hugs, gouging eyes, and punching heads off entirely.

As a counselor, the goals are a tad more broad and involve escaping through various methods or waiting the night out. For example, counselors can find car parts scattered throughout cabins to repair a car and drive off the property, or look for a fuse to fix a call box and ring the police for help. If counselors are bold enough, they can also attempt to stun or even kill Jason with weapons found throughout the map, although this is apparently extremely difficult and near impossible. 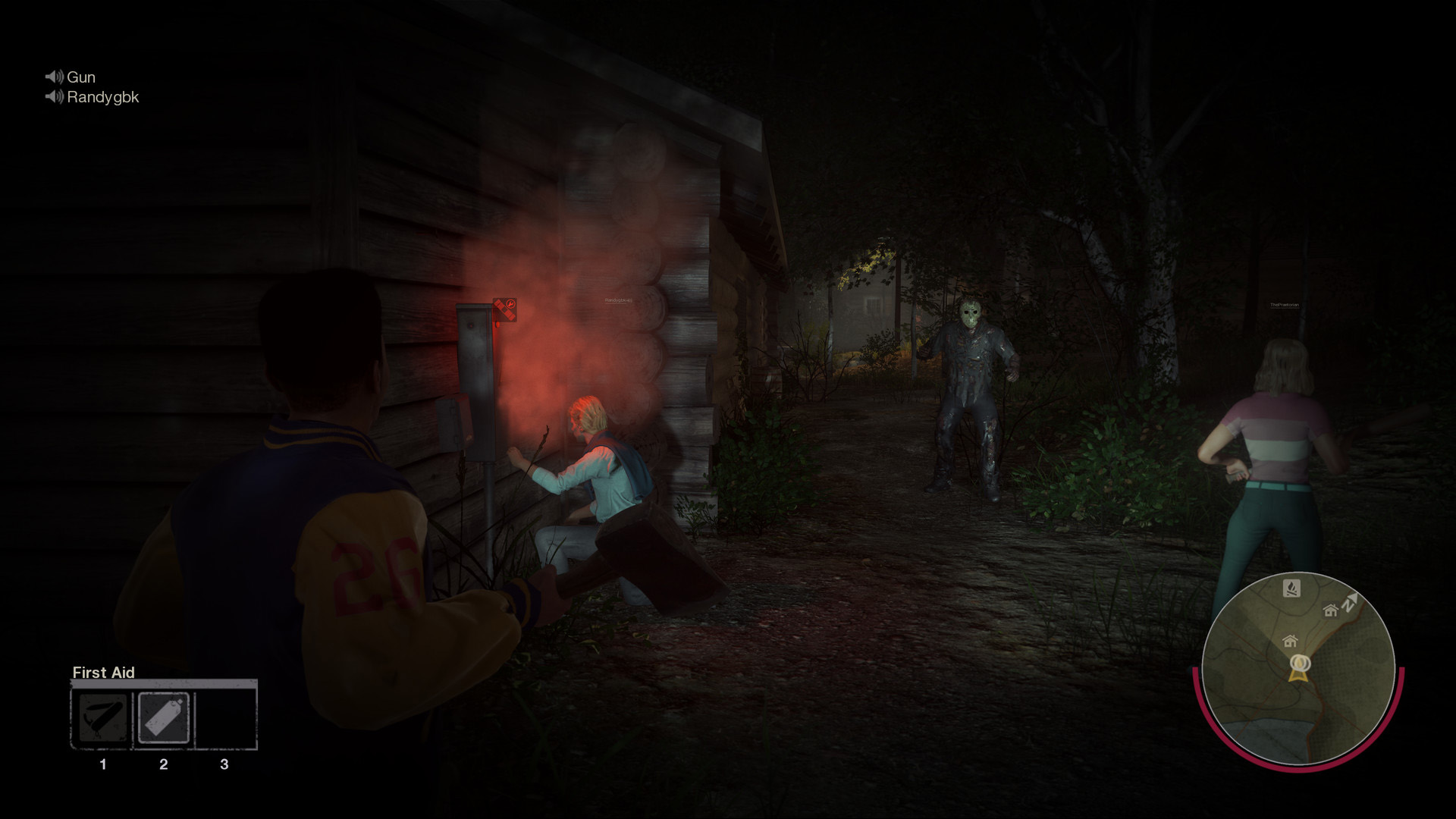 Jason is essentially god-like, with four powers that enable him to track, stalk, and kill his prey. Morph allows him to literally move anywhere he wants on the map; Sense gives him the ability to see counselors who are afraid and/or making noise (which is pretty much all the time); Stalk gives him stealthy abilities so he goes unnoticed; and Shift makes him move at high speed to catch up with counselors. Despite a cooldown for each, it’s a combination of skills that makes it very difficult for him to lose. Depending on the Jason variant that players choose, he can also come equipped with bear traps and throwing knives (more of which can be found on the maps). The variants have their own strengths and weaknesses and are based on the different movies (i.e., Jason Part 2 wears a sack on his head).

On the opposite side of the spectrum, counselors come equipped with very little outside of a few perks that you can roll for (spending earned experience) and equip in advance. Some perks give boosts to stats or allow the counselor to start out with an item, but there’s also a good chance that the perk will contain a negative attribute. Counselors have their own inherent character stats that affect things like how easy it is to break free from Jason’s grasp, how much noise they make when they sneak, and how fast they run (a maybe obvious hint: this is the most important stat). 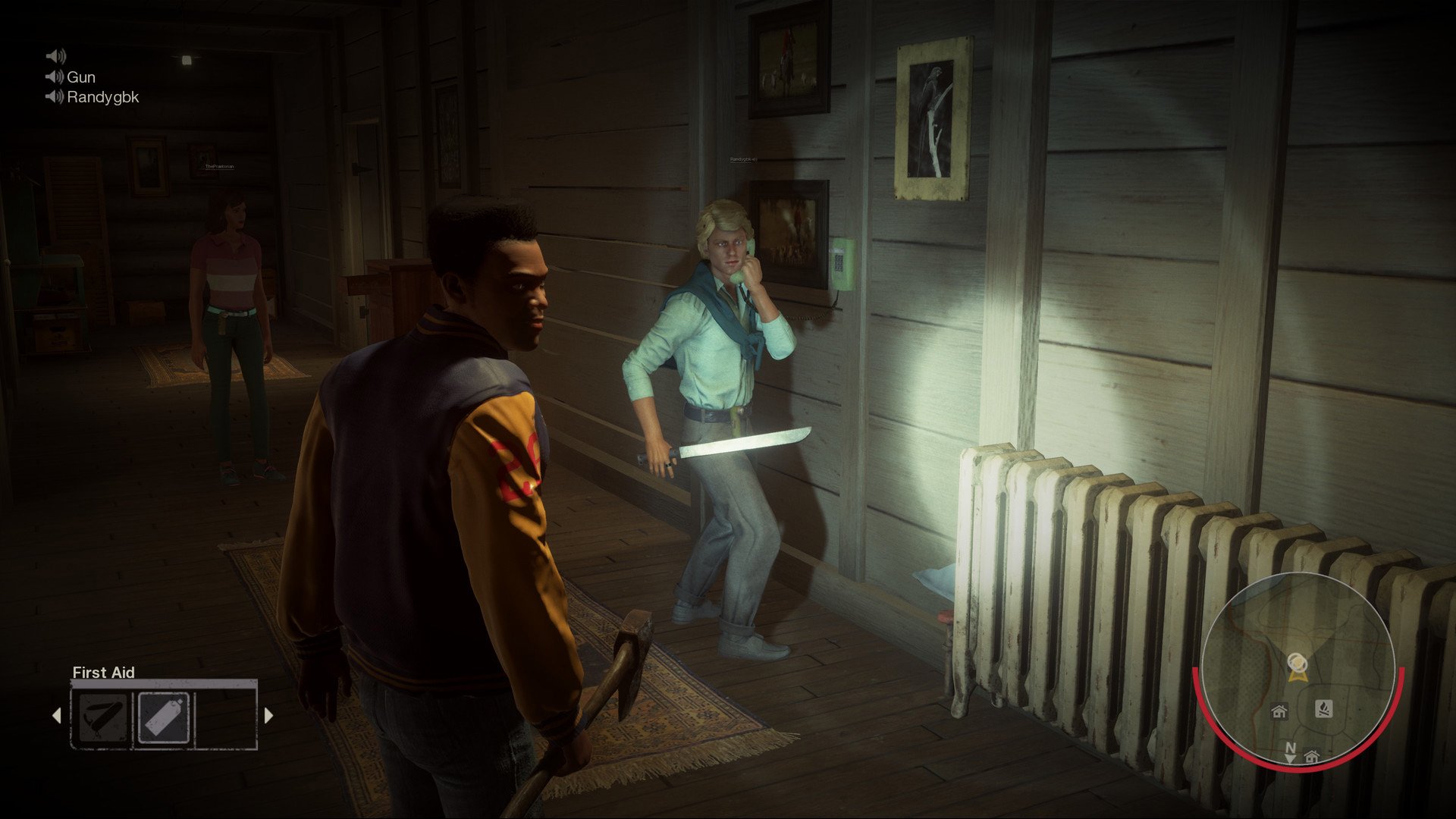 Contrasted to Jason’s straightforward goal of murdering everyone in sight, a fair amount of the game playing as a counselor involves much more nuance and a lot more coordination between the players. Counselors have a variety of methods to avoid Jason, including barricading doors, jumping through windows, or just plain hiding under a bed or in a closet. Since Jason has the inhuman ability to sense counselors on the map, it’s not long until he knows where they are, so running or finding items to stun is the norm of gameplay outside of finding the key items to repair something and escape.

Voice chat is instrumental in understanding where others are and what they’re working on, however counselors can only hear one another if they are physically located close to each another on the map. In an interesting twist, Jason can also hear counselors speak if he is physically close to them. This makes your words a critical part of gameplay despite 96% of other people spending their time making fun of how bad that particular Jason is or screaming “RUN BEEATCH” at other players. 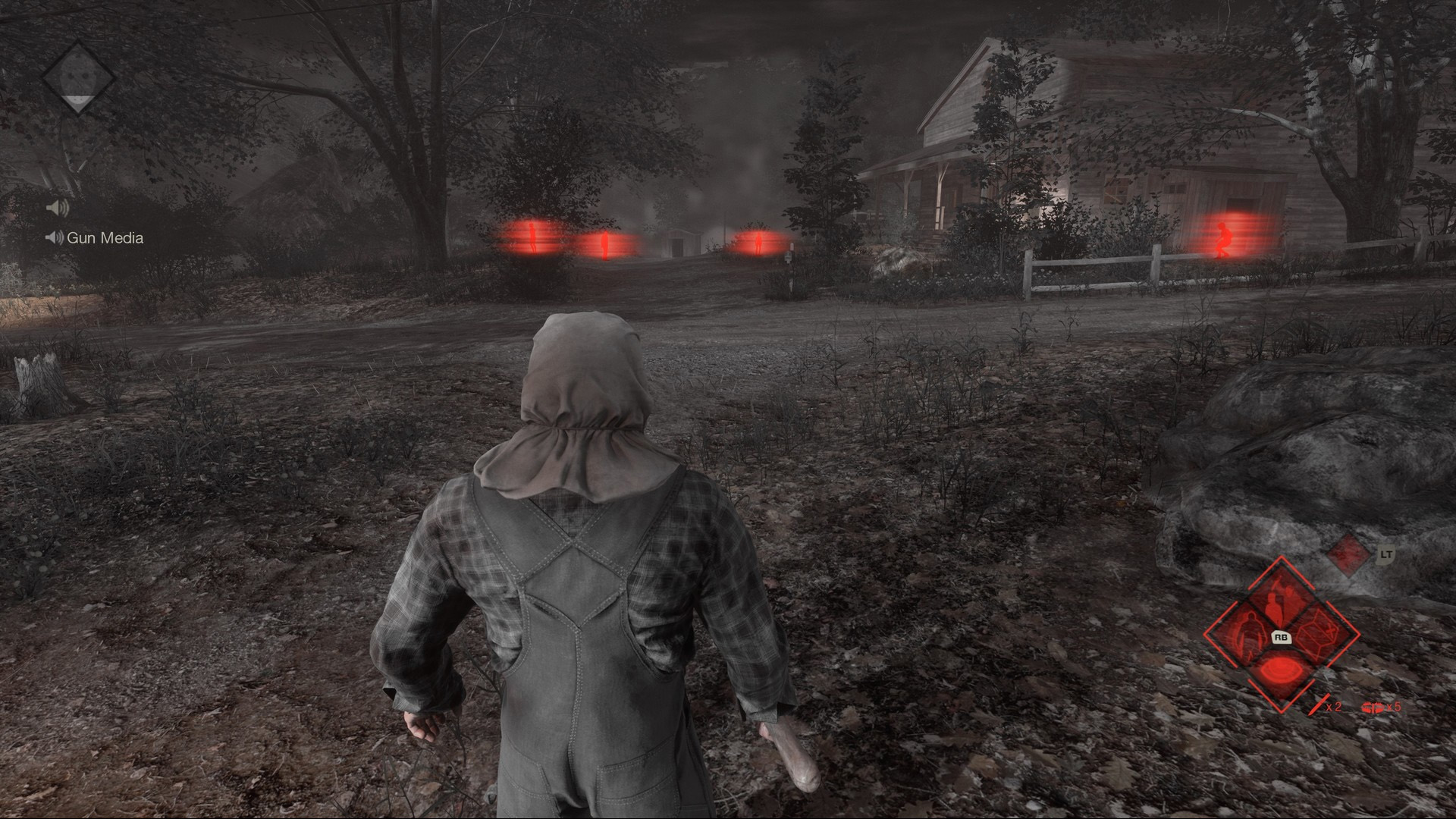 As you can probably tell so far, dying as a counselor is extremely common and often happens quick into the game. If a player is lucky, they can be resurrected as Tommy Jarvis, a canonical Friday the 13th character who totes around a one-shot shotgun. The rest of the dead players can spectate each of the counselors running in peril from Jason, which to be honest is one of the best features here.

What’s less fun is the queue times to join a session and the unfortunate rate of dropped games. It was pretty common for me to wait 20+ minutes before joining a session, and there were more than a few times when I was dropped completely from the game (sometimes even mid or late game). I also experienced sound issues — a couple of times the sound cut out entirely for voice chat which made it harder to coordinate with other players. 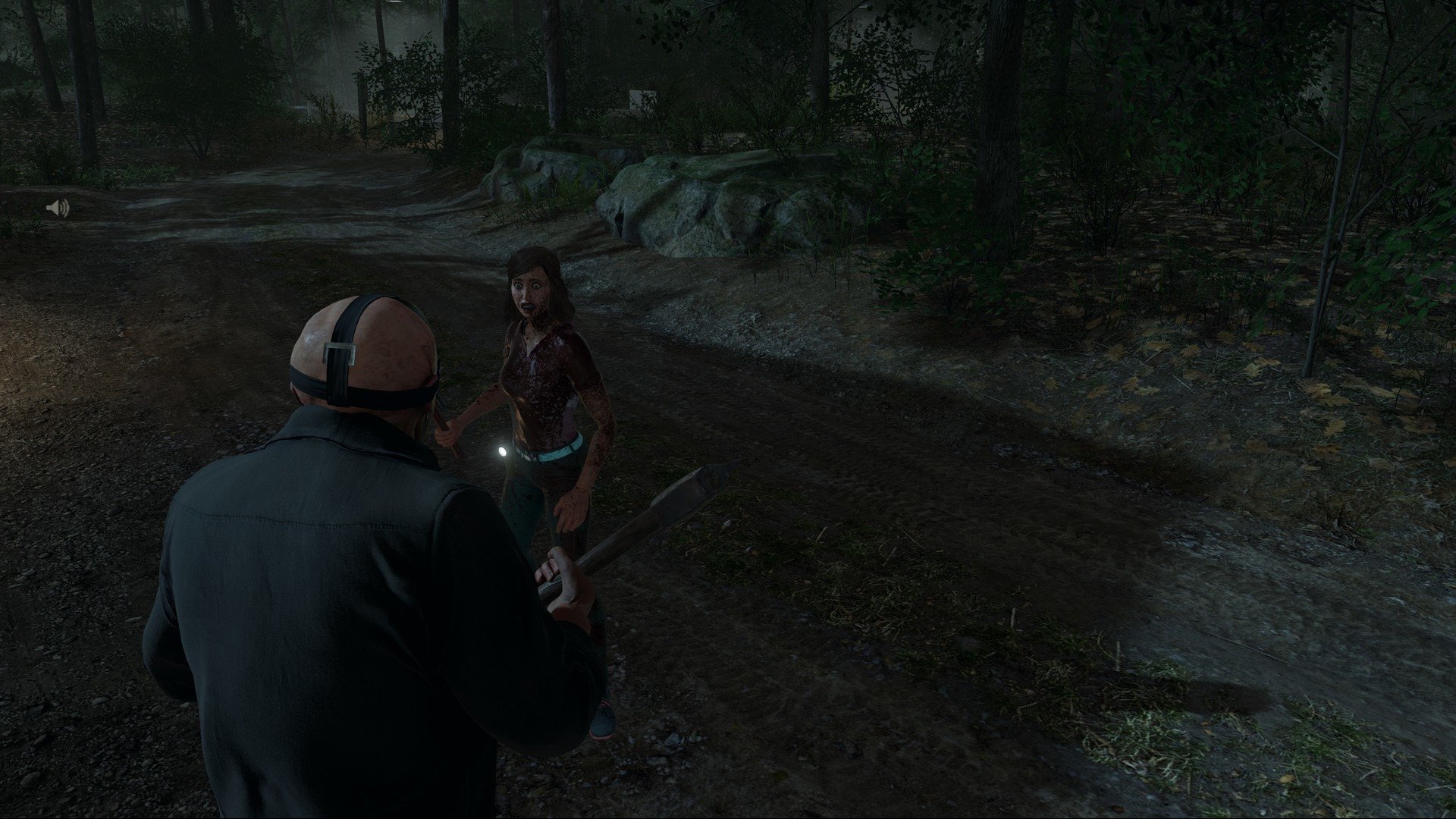 I wish I could say that the bad ended there, but there’s a lot of general jankiness that needs to be addressed. General actions in the game could use some tightening; for instance, the simple act of closing or opening a door requires too much precision and is just one example of finicky controls that often result in an easy death. Combat is too loose and feels sloppy, especially for the counselors where their shots really count. Jason’s Shift power is too unwieldy and hard to stop or turn, and from the outside as a counselor, he looks fairly glitchy when doing it which slightly ruins the suspense. Counselors can also accidentally hurt or, if you’re playing with particularly special assholes, actively grief one another. This is a frustrating aspect given that it’s already too difficult to win against Jason on top of the egregious wait times to join a session.

What is most glaring is the lack of a campaign or free-play mode. Supposedly, a campaign mode is on its way this summer along with the addition of AI bots, but Friday the 13th still greatly suffers from a lack of a good tutorial. This is especially important for such a unique game that doesn’t really have a counterpart to reference. The in-game tutorial as it stands has some slides that go over the goals for Jason and the counselors, but outside of that there isn’t anything provided to acclimate players or allow them to test things out. This would be fine in a setting where things are intuitive, but that’s not the case here — the escape methods are fairly complicated to follow, and it’s not always clear what some items do or how to use them. 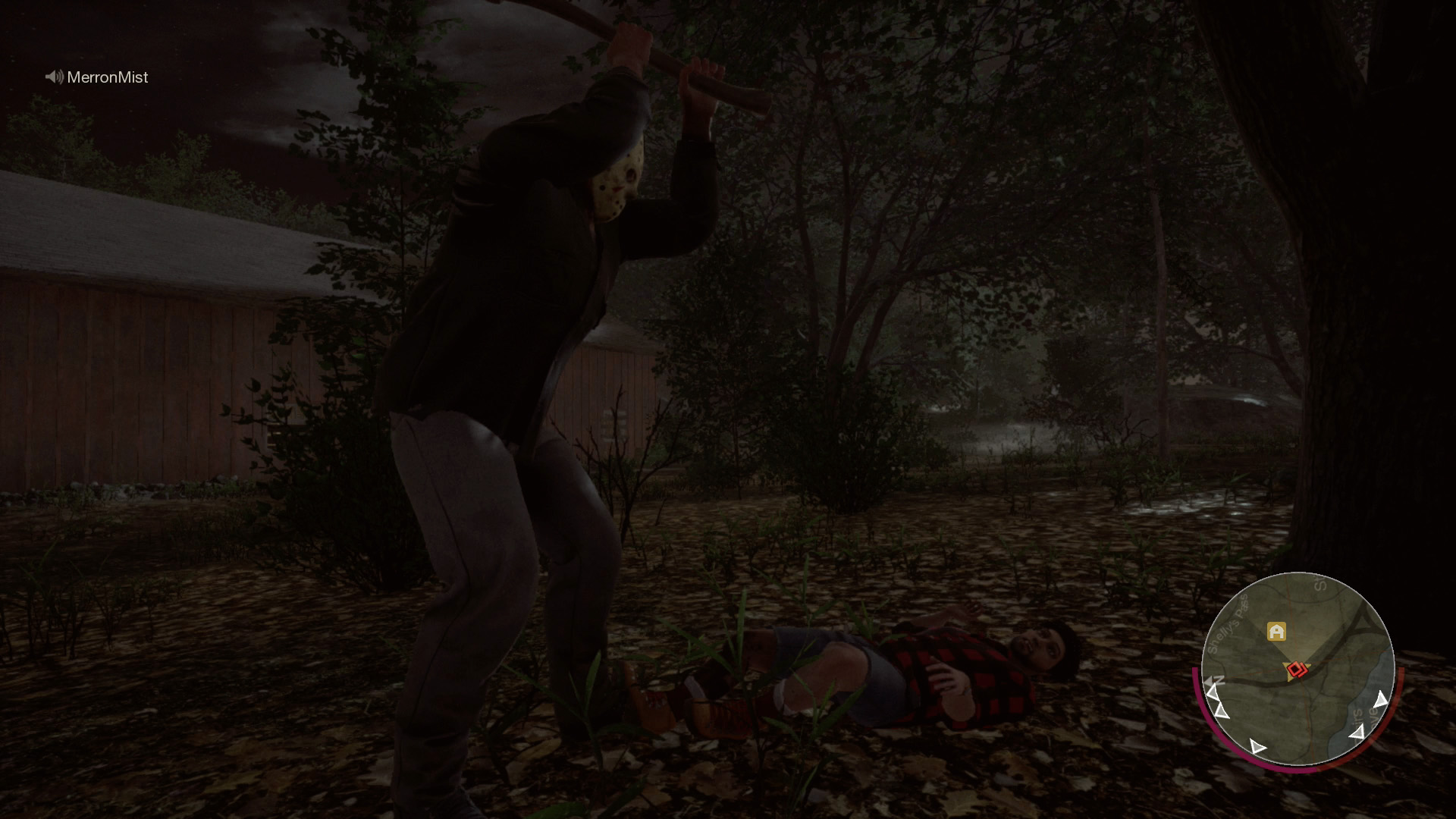 Despite its many issues, Friday the 13th is still a fun time and has potential to be even better if they can deliver on the campaign mode and the addition of AI players. Even given the unbalanced nature of the game, it’s the thrill and adrenaline that truly make it unique and continually enjoyable.

There aren’t many games that can offer a camaraderie aspect to the survival horror genre, and Friday the 13th delivers in that regard. It could certainly use a lot more fine tuning and adjustments, but for now, it delivers on a solidly campy experience.